Alcohol's Enduring Appeal Is A Matter Of Brain Chemistry And Genetics

University Place: Why Drinking Has A Broad And Unique Impact On The Human Body
Will Cushman
WisContext
Video:
University Place
PBS Wisconsin
May 23, 2019 | 4:45 p.m. 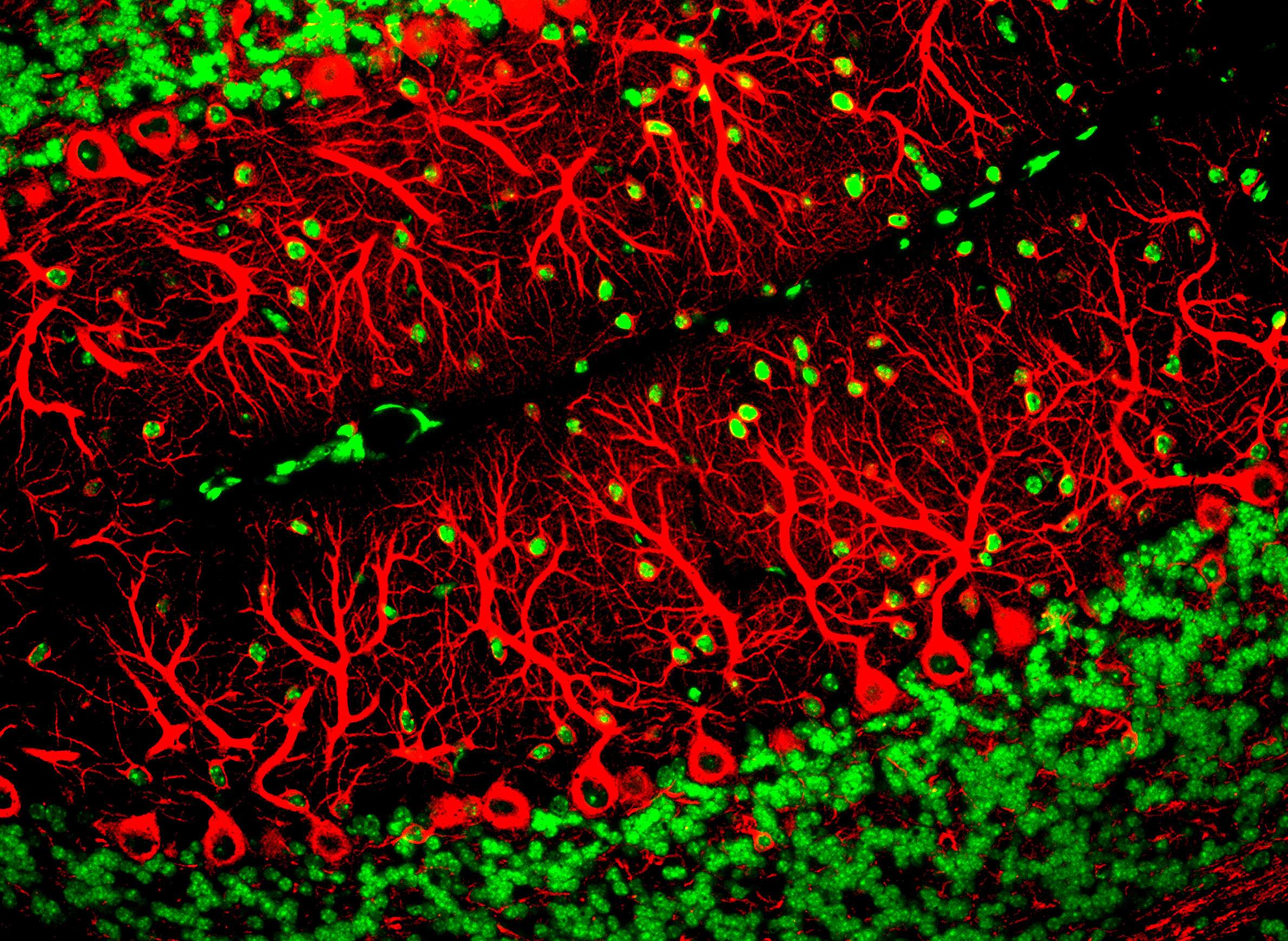 Yinghua Ma and Timothy Vartanian, Cornell University/National Institutes of Health (CC BY-NC 2.0)
Purkinje cells (red) are one of the main types of nerve cell found in the brain.

Wisconsin's affinity for alcohol — and the drug's complicated cultural impact on the state — can in many ways be explained by a few straightforward biochemical processes. Alcohol's effects on the human brain and nervous system, and the role genetics plays in how people metabolize the chemical, point to one important factor in its widespread use and abuse.

"At a fundamental level, I bet most people who drink [alcohol] don't really know exactly how this drug works," said Kevin Strang, a faculty associate in the Department of Kinesiology at the University of Wisconsin-Madison School of Education. "It's unique in the drug world."

Strang recounted the physiological effects of alcohol and their relationship with genetics for a June 22, 2015, lecture on the UW-Madison campus recorded for Wisconsin Public Television's University Place.

Unlike other drugs, which target specific biological functions, the chemical composition of ethanol — the form of alcohol humans are able to readily metabolize and have consumed since the advent of agriculture — lends it the ability to act as a universal "skeleton key" and affect proteins throughout the human body, Strang said. It's why alcohol broadly affects the body, including the cardiovascular, gastrointestinal, urinary, reproductive, endocrine and nervous systems.

Strang zeroed in on the effects of alcohol within the nervous system, and specifically how alcohol impacts the brain pathways of dopamine.

A neurotransmitter and hormone, dopamine has several functions in the body, one of which is central to arousing the brain’s pleasure center. For most people, alcohol consumption leads to a flood of dopamine into that part of the brain, producing a classic feeling of euphoria, or "buzz."

"It turns out the way alcohol influences the dopamine pathway explains why binge drinking happens, and it also can explain why some people become dependent on alcohol for enjoyment," Strang said.

Abuse behaviors emerge because alcohol not only leads to feelings of euphoria, but as it leaves a person’s system, dopamine levels crash. A typical man can metabolize one standard alcoholic drink (1.5 fluid ounces of distilled spirits or about 12 fluid ounces of beer) per hour, with a typical woman taking a little longer, meaning the fleeting buzz is followed by a period when falling dopamine levels reduce the feeling of pleasure. The only way to maintain a buzz is to consume more alcohol.

"As long as the rising phase [of dopamine] is maintained, the euphoria, the mood boost is maintained," Strang said. The rise and fall of dopamine is connected with the concentration of alcohol in a beverage, he added, which is why a shot of liquor produces a quicker buzz and more speedy mood crash than a can of beer.

In addition to producing a classic buzz and post-drinking hangover, alcohol can inhibit memory formation, reduce social inhibitions and can increase anxiety, though Strang added that its effects vary. Excessive alcohol consumption can amplify these effects, sometimes leading to a complete inability to form new memories and risky behaviors.

Alcohol's variable impacts on people are partly related to genetics, Strang said, pointing to several animal studies. These included one in which fruit flies were conditioned and bred to be particularly susceptible to the intoxicating effects of alcohol. Other studies showed that alcohol tolerance and an affinity for alcohol could be bred into animals, including mice and monkeys.

An inclination toward alcohol can also result from epigenetic processes, whereby life experiences alter gene expression. Strang pointed out controversial studies at UW-Madison (the Harry Harlow research) that showed, among other things, monkeys who were neglected during infancy were more likely to seek out alcohol than their well-cared for peers.

Most human civilizations have incorporated the consumption of alcohol into religious and social customs for thousands of years. During most of that history and in many places, including crowded and filthy medieval European cities, sterile alcohol was often a safer beverage to drink than water. Strang said this reality may have led to selective pressure that favored people who could tolerate or preferred regular alcohol consumption.

"Those who preferred alcohol to water and could handle its toxicity [would] survive more often and have more children," he said. "Their genes [would] be passed along."

Some of the descendants of these European city-dwellers eventually emigrated to Wisconsin.

"Who settled the upper Midwest? It was settlers from large cities in Europe where if you didn't drink alcohol and if you weren't good at drinking alcohol, you would've died of cholera or dysentery," Strang said, using a bit of hyperbole to make the point that early immigration to Wisconsin brought a population accustomed to alcohol consumption.

That potential genetic preference, combined with over a century of cultural and economic development in which alcohol has played a central role in the state, has led to a population where alcohol is a deeply-seated force in life and death. One in 10 deaths among working-age adults in Wisconsin is attributable to alcohol, Strang noted, adding: "Wisconsin has a drinking problem."


Editor's note: The article was reported in collaboration with Wisconsin Public Radio for its "High Tolerance" series, which explores the state's complicated relationship with alcohol.

Why Addiction Keeps People On A 'Road Of Pain'
Aging, Alzheimer's And The Long-Term Health Of Brains
Discovering The Role Of Sleep In Brain Development, Learning And Health
Report: Wisconsin No Longer Hardest-Drinking State But Alcohol Problem Remains
A Brief Introduction To Fermentation In Wisconsin