Contact Tracers In Wisconsin Are Battling COVID-19 — And Misinformation 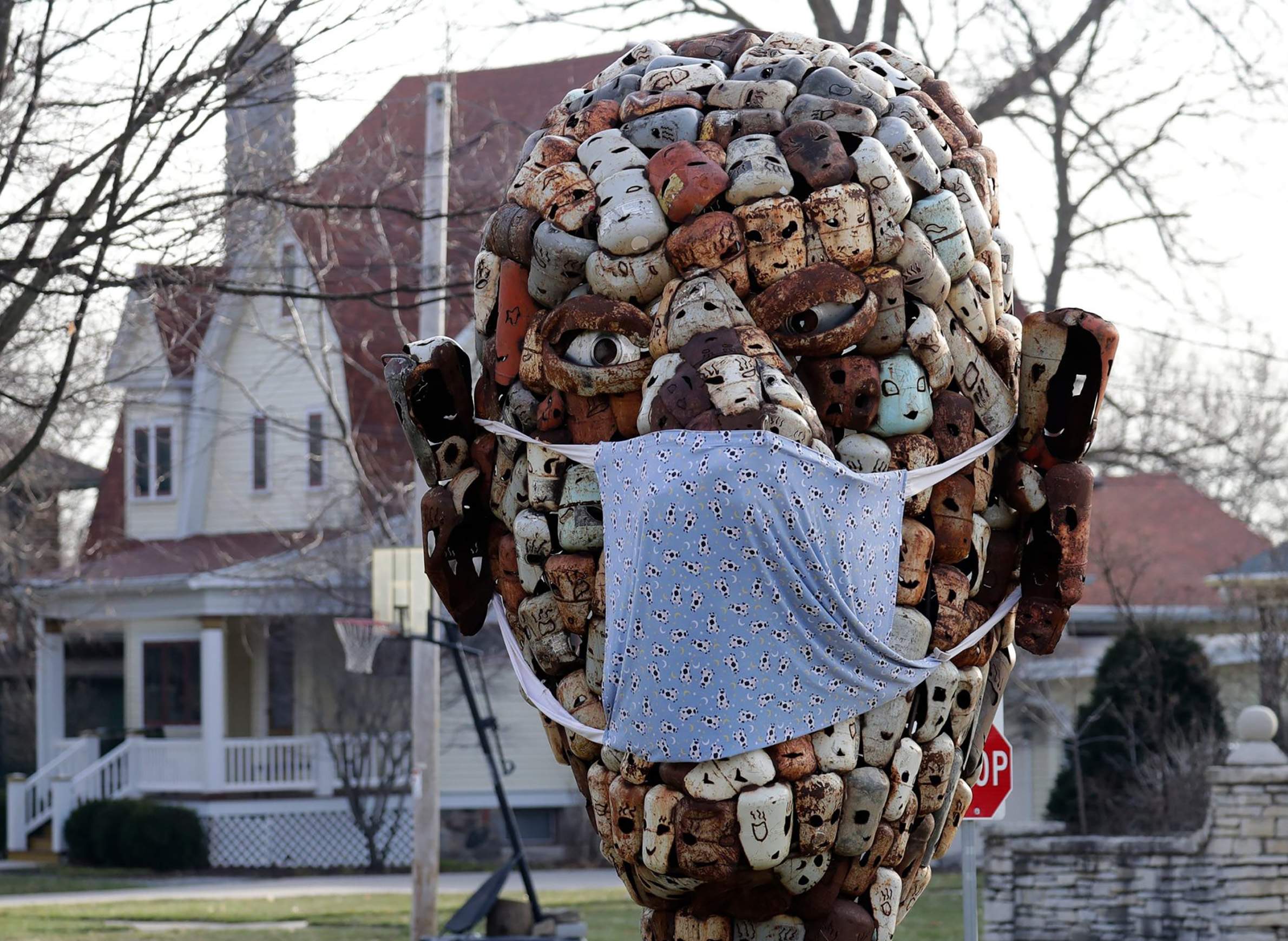 Dan Powers/USA TODAY NETWORK-Wisconsin
A giant face mask is wrapped around The Collective, a sculpture by Paul Bobrowitz, along East College Avenue in Appleton, on April 6, 2020. Appleton city officials have been exasperated by false rumors about contact tracing, which communities use as a key tool to contain the spread of COVID-19.

Having posed a series of increasingly paranoid-sounding questions about the local response to the COVID-19 pandemic, Appleton Common Council member William Siebers cleared his throat, preparing for the most outlandish yet.

"I've got to be serious," he said. "Are there going to be any cameras situated in the city of Appleton that [are] going to supervise anybody who is quarantined or isolated in their homes, to make sure they don't leave their homes?"

Siebers' question was designed to prompt a city staffer to explain that, despite what residents may have heard, Appleton was not planning to adopt an official "Big Brother" policy.

Conspiracy-tinged rumors swirled around Appleton ahead of the council's June 17 online meeting. Council members received an email in May from somebody who claimed to have witnessed city employees installing surveillance cameras in parts of town that still lack cameras, Ald. Katie Van Zeeland said.

"So, there is this conspiracy theory that local government is at least partially responsible for some sort of surveillance system to make sure that when the state is under quarantine guidelines, people are staying at home," Van Zeeland said. "Somebody is doing some fear mongering."

A June 17 post on the Facebook group Wisconsinites Against Excessive Quarantine urged Appletonians to oppose the Common Council's acceptance of up to $1.2 million in state reimbursement for its public health response to COVID-19.

The post warned that "bad stuff is about to happen at the council meeting tonight," and "there are now cameras set up all over for surveillance." It drew hundreds of reactions and comments online and fueled a barrage of questions to the council about contact tracing and isolation protocols from concerned residents — and from people who don't live in Appleton. 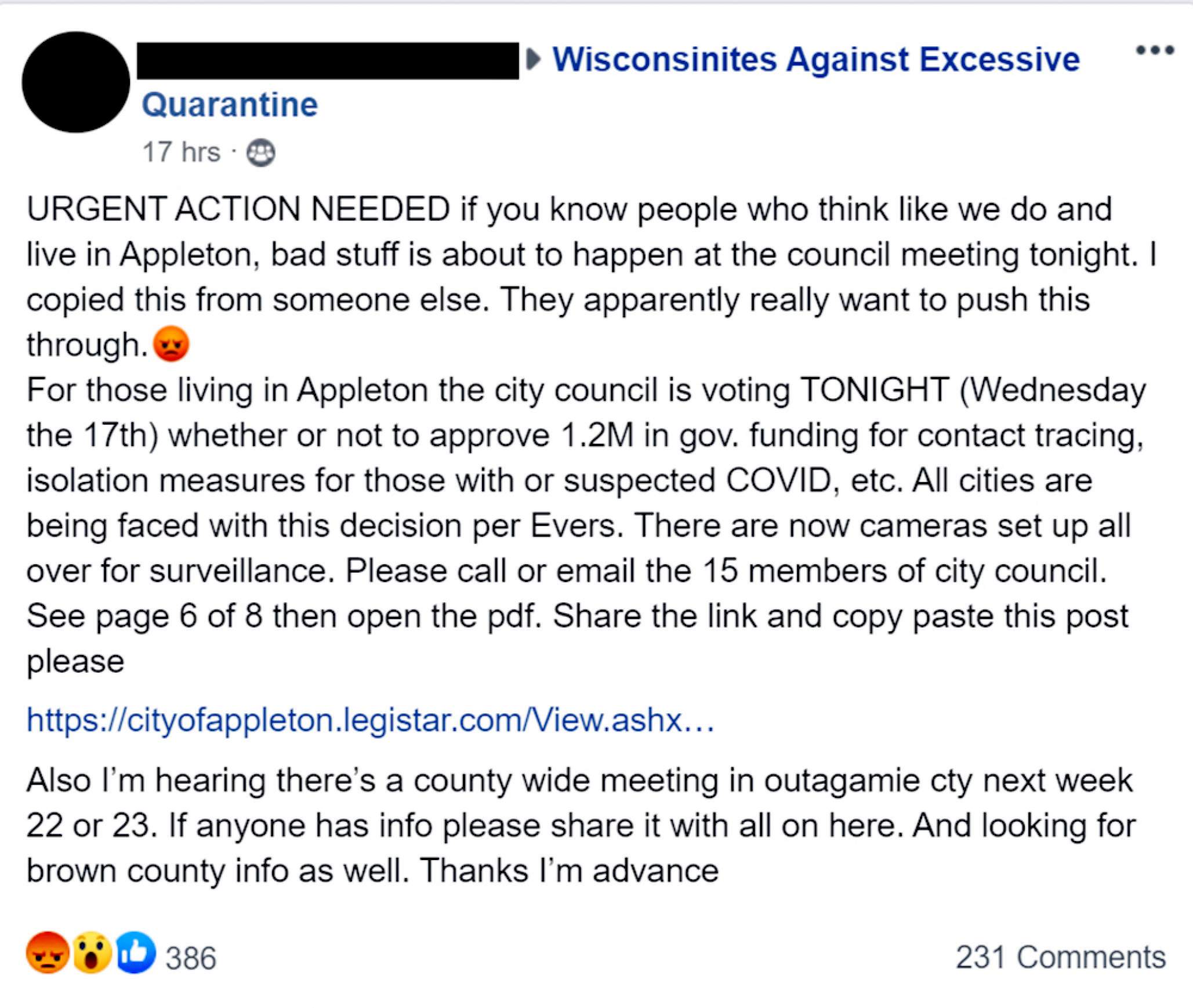 Facebook
Wisconsinites Against Excessive Quarantine is among the groups that drummed up opposition  to Appleton's plans to ask for state reimbursement for contacting tracing, falsely telling followers that the city planned to install surveillance cameras. This screenshot is from a June 17 post.

Commenting by email on the out-of-towners who weighed in on the debate, Siebers said: "I got the impression that they were not aware that their [own] communities also have available to them money to reimburse [COVID-19] expenses."

Van Zeeland took to Facebook to address the suspicions of residents who accused the government of overreaching in efforts to slow the spread of COVID-19. In an interview, she said she watched skeptics perform "mental gymnastics" to make conspiracy theories "make sense to them."

The council decided to address the rumors head-on, "so staff could refute them," Van Zeeland said.

The 15-member council voted unanimously to approve the funding. But the episode frustrated Van Zeeland, who says local representatives are giving residents no reason to believe they are being watched, yet rampant misinformation has required them to prove that negative — a nearly impossible task.

Appleton isn't the only place in Wisconsin where coronavirus skeptics are making themselves known. Employees of the Washington Ozaukee Public Health Department have reported receiving verbal harassment and threatening emails, and being followed while driving health department vehicles. The department's logo has since been removed from the vehicles, the Milwaukee Journal Sentinel reported.

Conspiracy theories about contact tracing have percolated on social media since early May, after the Centers for Disease Control and Prevention published guidelines on how state health authorities should implement this "core disease control measure" to slow the spread of the novel coronavirus, which has killed at least 130,000 Americans — including about 800 Wisconsinites, according to government estimates.

President Donald Trump's administration included contact tracing in its Opening Up America Again guidelines but left it up to state governments to assemble tracing teams.

Contact tracing identifies and informs people who have been in contact with someone who has tested positive for COVID-19. The Wisconsin Department of Health Services has hired 1,000 contact tracers at $20 an hour to help track the virus' spread, a strategy that experts touted as crucial in reopening the state's economy and protecting public health.

But suspicion and mistrust of contact tracers quickly gained traction on Facebook and Twitter. A social media monitoring project by Wisconsin Watch and First Draft News — an international nonprofit concerned with trust and truth in the digital age — has tracked a series of false narratives about the disease investigators.

The unsupported theories go well beyond a national grid of surveillance. Some suggest that Gov. Tony Evers has been selling the information gathered by contact tracers, while others say the tracers are "communist soldiers."

Among the more bizarre: that contact tracers are tracking people by requiring a Wisconsin ID to get a haircut. 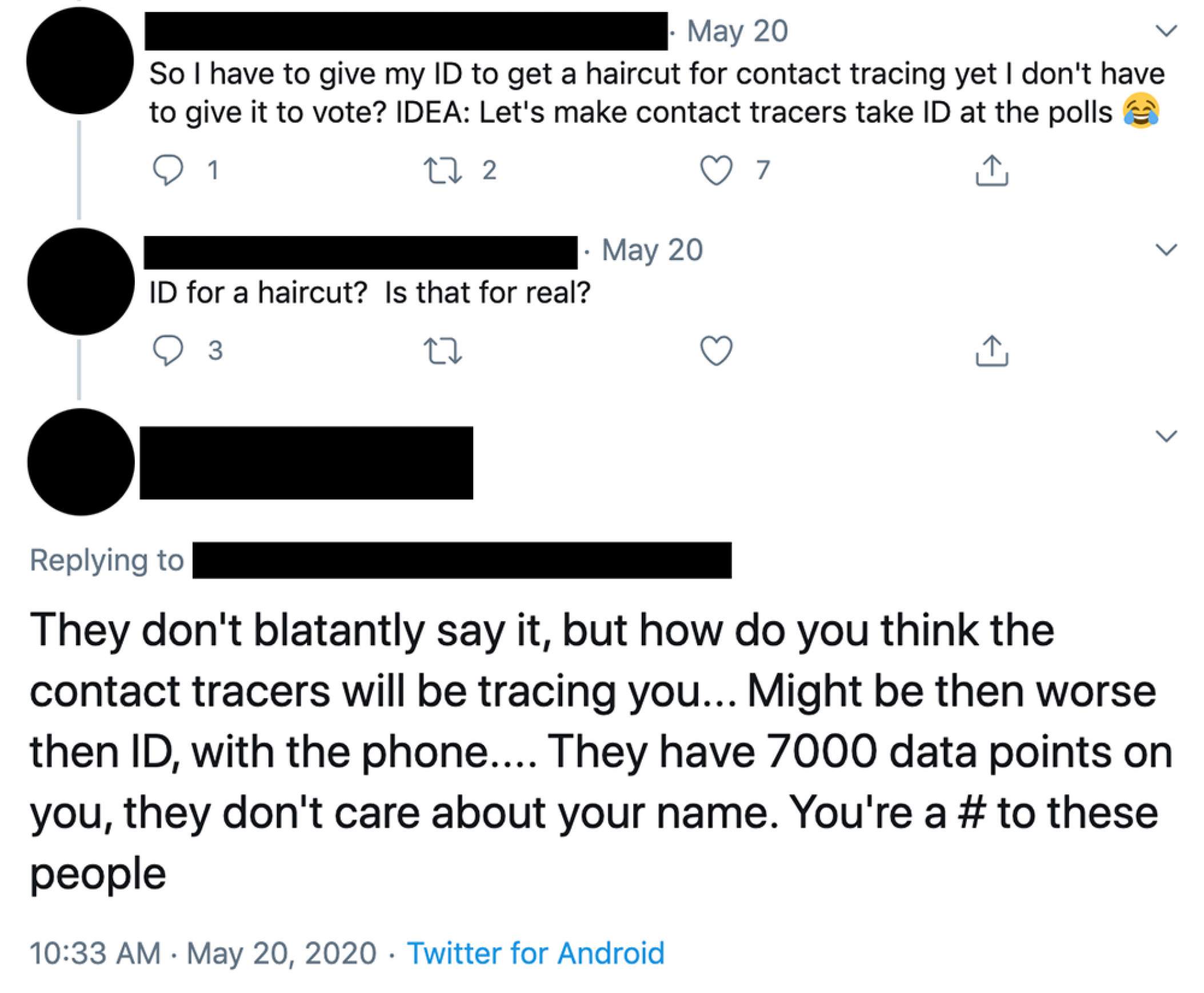 Twitter
Among the bizarre rumors swirling in Wisconsin about contact tracing: that health departments require people getting haircuts to produce identification so they can be tracked. There are no such requirements. The Twitter handles and photos of the people in this thread were covered by Wisconsin Watch to obscure their identity.

Many posit that tracers work in conjunction with Child Protective Services to remove children from the homes of high-risk medical professionals — a popular theme of disinformation surrounding the issue, according to analysis by First Draft researcher Keenan Chen.

"While forced removal did happen in China and perhaps in some other countries, there has not been any indication or report that [U.S.] law enforcement agencies have used such a tactic," he said.

Much of the social media misinformation surrounds HR 6666 — the COVID-19 TRACE Act, sponsored by U.S. Rep. Bobby Rush, an Illinois Democrat. The bill would direct $100 million to contact tracing programs. The bill’s assigned number happens to be one digit away from 666 — the "number of the beast" — which only fueled suspicion from national figures such as Charlie Kirk, author of The MAGA Doctrine and a reported sower of misinformation. In a viral Twitter post, he called tracing programs "a totalitarian power grab."

“Contact tracing is a key part of the effort to reduce transmission of the coronavirus, but it's important to know that scammers may try to pose as contact tracers,” Kaul said in a statement. "Before giving anyone information for contact tracing, please make sure they are a legitimate contact tracer and not someone trying to commit identity theft."

Real contact tracers won't ask for money, your Social Security number, or bank or credit card information, Kaul said. They won't identify the person who tested positive by name. They will call by phone — not send text messages or emails asking you to follow a link — and identify themselves by first and last name and their health department. 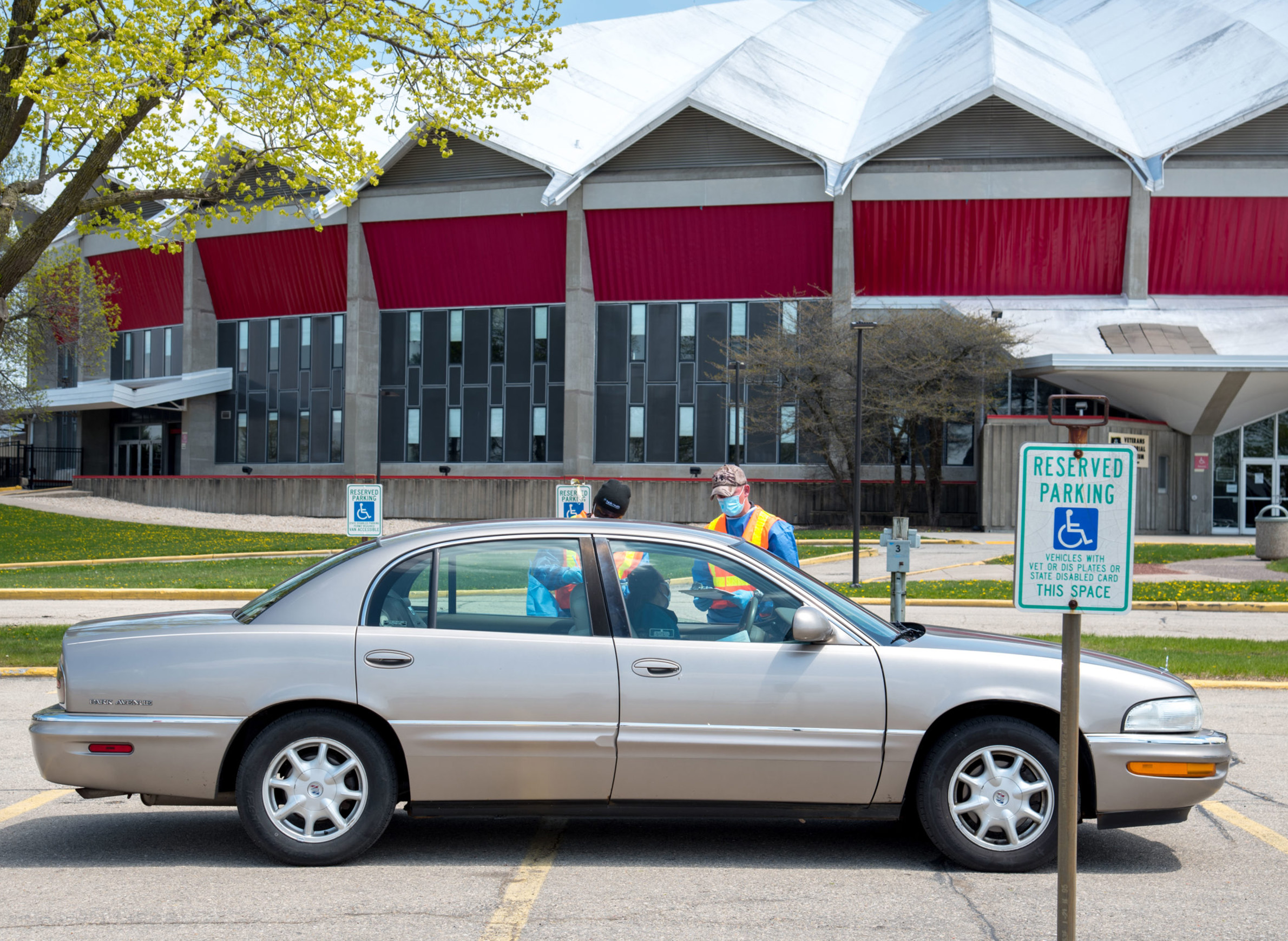 Will Cioci/Wisconsin Watch
Public Health Madison & Dane County noted in a June 30 Facebook post that local contact tracers are increasingly encountering "people with COVID-19, especially younger people, refusing to tell us the names of close contacts." Here, department employees fill out consent and personal information forms for waiting subjects at a drive-through testing facility for COVID-19 at the Alliant Energy Center in Madison on May 13, 2020.

"People might be hesitant to give the names of their contacts because they think they have been doing something 'bad' — like gathering — and don't want to get others in trouble," Christy Vogt, a health education coordinator for the county, noted in an email. "Some people think they've already told their friends they tested positive and that that is 'good enough.' And others might be concerned that if they tell us close contacts, those people will be quarantined and unable to go to work, which could be a burden.

"We want to reiterate that our contact tracers are not getting anyone in trouble and aren't here to judge — they just want to contain the spread of COVID-19 in our community."

Despite the swirl of misinformation, Gabrielle Lentz, a contact tracer for the Trempealeau County Health Department, says it hasn’t interfered with her work. All of the residents she's contacted have been cooperative and understanding of the protocol.

"I have not had any cases where people question what we're doing," she said. "Most people are aware that this is part of the process with COVID-19 cases at this point. Even pretty early on, we always just explained that we're with the health department, that it's confidential and why we're following up. I haven't had any bad feedback."

Lentz emphasized that contact tracers are bound by state and federal law to keep personal information confidential. Data is uploaded into the Wisconsin Electronic Disease Surveillance System, described on its website as "a secure, web-based system designed to facilitate reporting, investigation, and surveillance of communicable disease."

"That is also confidential information that only select state epidemiologists and health departments have access to," Lentz said.

"Under better circumstances, I think America is capable of having a pandemic response where we would do contact tracing, and then the government would pack up and go home when the crisis passed; it wouldn’t be a slippery slope [to authoritarianism]," he said. "But right now, there's so much mistrust in the current federal government and it's hard to be optimistic about that. Nobody is saying, 'I'm sure it will be fine.'"

Employees of the Washington Ozaukee Public Health Department have reported receiving verbal harassment and threatening emails, and being followed while driving health department vehicles. The department’s logo has since been removed from the vehicles. 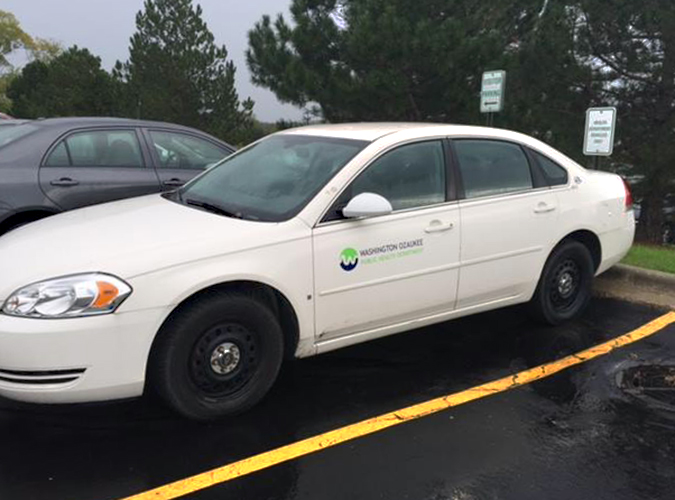 Ald. Katie Van Zeeland has received emails about the purported dangers of 5G since joining the council last year. And as the mother of an autistic child, she's acutely aware of vaccination opponents, including some who cite debunked research to support their claims. She senses crossover with the contact tracer conspiracy theorists.

"Crunchy moms saying, 'You vaccinated your child and that's why they're autistic,' I've had those interactions with people," she said. "There's a similarity there between the medical freedom people. They seem to be embracing these conspiracy theories as well."

During the council's June 17 meeting, Ald. William Siebers asked if the city has or plans to forcibly remove anyone from their homes. He asked if there were plans to build or rent an isolation center in the city of Appleton. And finally, he wanted to know if cameras were monitoring people as they self-isolated or quarantined in their homes.

City staff answered "no" to each question.

"From what I gather," Siebers said, "there's some misinformation — bad information, in my opinion — being circulated."

Howard Hardee is a Madison-based journalist who reported this story for Wisconsin Watch. He is a fellow at First Draft News, an organization that trains journalists to detect and report on disinformation. Wisconsin Watch collaborates with Wisconsin Public Radio, PBS Wisconsin, other news media and the University of Wisconsin-Madison School of Journalism and Mass Communication. All works created, published, posted or disseminated by Wisconsin Watch do not necessarily reflect the views or opinions of UW-Madison or any of its affiliates.

The Use And Misuse Of Wisconsin's COVID-19 Projections
Wisconsin's Urgent, Imperfect, Transparent, Confusing, Essential COVID-19 Data
Most COVID-19 Patients In Wisconsin Have Recovered, But What Does That Mean?
Clues To Wisconsin's Coronavirus Present Echo From Its Pandemic Past
Learn More About The Novel Coronavirus, COVID-19 And Wisconsin