How To Help Pollinators Overcome Threats 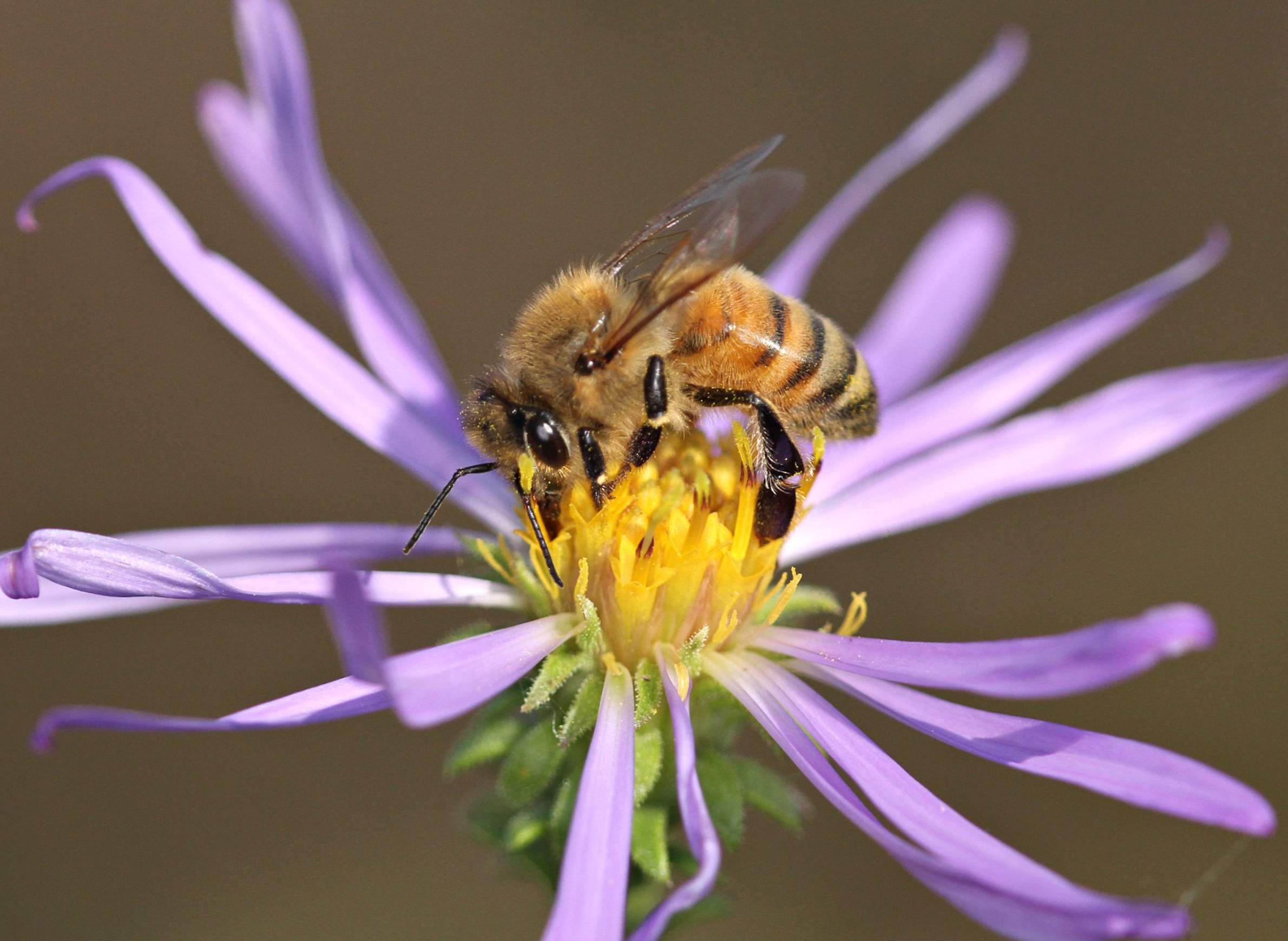 The Western honeybee, seen here on an aster, is one of North America's most important pollinators.

Pollinators play an integral role in the biological world. Numerous plants have evolved alongside these animals and rely on them to aid in their life cycle, including many species used by humans. Agricultural crops like melon, canola, cranberries, cucumber, strawberry, cotton, and several nuts rely on pollinators to produce fruit. Growers of more than 90 commercial crops in the U.S. utilize pollination services. Altogether, about $55 million of Wisconsin’s agricultural products rely on pollinators.

Although many people may think of honeybees when considering pollinators, they can also include other insects like butterflies, ants, wasps, flies, moths, and, in a few cases, specific hummingbirds and bats. Wisconsin is home to about 400 species of bees.  Some species of bees can forage relatively great distances from hives or nests, in some cases over a mile. Bees are some of the most effective pollinators due to the way that they collect pollen, not just how they feed on it.  Honeybees in Wisconsin that pollinate wild plants, gardens and crops and in turn produce honey are domesticated, colonial-type bees that require human care. However, most bee species are solitary and not domesticated.

Apis mellifera, known as the Western honeybee, was brought to North America in the 1600s. Today, about 135,000 beekeepers manage around 2.4 million colonies around the U.S. The majority of beekeepers are hobbyists, though others raise bees commercially for honey production and seasonal rental as pollinators. Some commercially managed bees are used to pollinate crops in Wisconsin,  and are transported to states with warmer climates to do the same over the winter.

Concerns regarding honeybee health appeared in the early 1980s with the introduction of several parasitic mites, most importantly Varroa destructor, the Varroa mite. This mite can be particularly hard on the domesticated honeybees of European origin. Over the ensuing years, other challenges to pollinator health have emerged from pathogens, the use of pesticides (fungicides, insecticides and herbicides), queen failure (genetics) and other colony stressors, including poor nutrition, movement (migratory stress) and environmental factors (cold stress).

Recent concerns center on colony collapse disorder, a situation where sudden population loss occurs within bee colonies. The disorder’s cause is the subject of ongoing research, but is suspected to be a result of a complex combination of factors including the emergent challenges facing bees and a potential immune suppression. The National Agricultural Statistics Service reported in 2016 colony losses up to 40 percent in some states, but the national average loss was 18 percent. Recently, these concerns have extended to include many wild pollinators, including bees, wasps, ants and other species.

Reported declines in domesticated and possibly wild pollinators has motivated federal and state responses. In 2007, the U.S. Department of Agriculture released its Colony Collapse Disorder Action Plan.  In 2014, the White House issued a memorandum on “Creating a Federal Strategy to Promote the Health of Honey Bees and Other Pollinators.” This memo directed states to establish task forces to improve pollinator habitat and encourage public-private partnerships to better understand and promote pollinator health. As part of this initiative, some states developed pollinator protection plans.

The Wisconsin Pollinator Protection Plan, issued in April 2016, provides information and best management practices for gardens and lawns, beekeeping, pollination services on farms, and finally prairies, roadsides and other open spaces. Being based on four areas of bee-human interaction, the state’s plan suggests ways individuals, businesses and community organizations can promote and protect pollinators in Wisconsin.

Homeowners can take several steps to promote pollinator health on their properties. Providing forage and/or nesting habitat can be very important. Diverse plantings of flowering plants give a natural mix of pollen and nectar. Plants that thrive in Wisconsin’s climate should be selected, but invasive species should be avoided. Flowers of different colors that bloom at different times will provide a variety of sources during the whole season. Cultivars and flowering plants bred to produce many petals should be avoided, though. They may look great, but many of those showy hybrids are sterile and produce little or no pollen.

When possible, a portion of a home’s landscape should be left undisturbed to promote the native plants and bunch grasses that offer nesting opportunities for solitary bees. Nests should be left alone if they will not cause an injury or health problem. Because yellow jackets (wasps) are typically more aggressive than bees, they often require management such as removal. If local ordinances permit and neighbors don’t mind, dandelions should be allowed to bloom (the seed heads just before they open again). Clovers and other flowering lawn plants allowed to bloom will help pollinators as well.

Pesticides should only be used when necessary, and people who apply them should be sure each is effective for the pest being managed. Therefore, accurate identification of the pest is essential.

Pesticides should not be applied while pollinators are foraging or plants are flowering. For example, lawns should be mowed to remove clover and dandelion flowers before any pesticide application. Integrated pest management focuses on the biology of a pest, scouting for its presence and utilizing a variety of tactics to prevent and manage it in an economically and environmentally sustainable fashion.

Anyone applying a pesticide should always read the label before using it. Some pesticides are more toxic to bees and related pollinators than others. Pesticides that break down quickly and do not migrate to the nectar are recommended. Reading labels will help identify which chemicals put bees and other pollinators at high risk. The University of California Integrated Pest Management Program offers an online tool that helps identify the level of risk to pollinators among many of the pesticides commercially available.

Pollinators are central players in the habitat and life cycle of many plants, and are an integral component of the food production system. Working to assure their existence and broader success is important to people and the world all lifeforms share.

Glenn Nice is manager of pesticide applicator training for the University of Wisconsin-Extension. R. Chris Williamson is a professor and entomologist with UW-Extension.