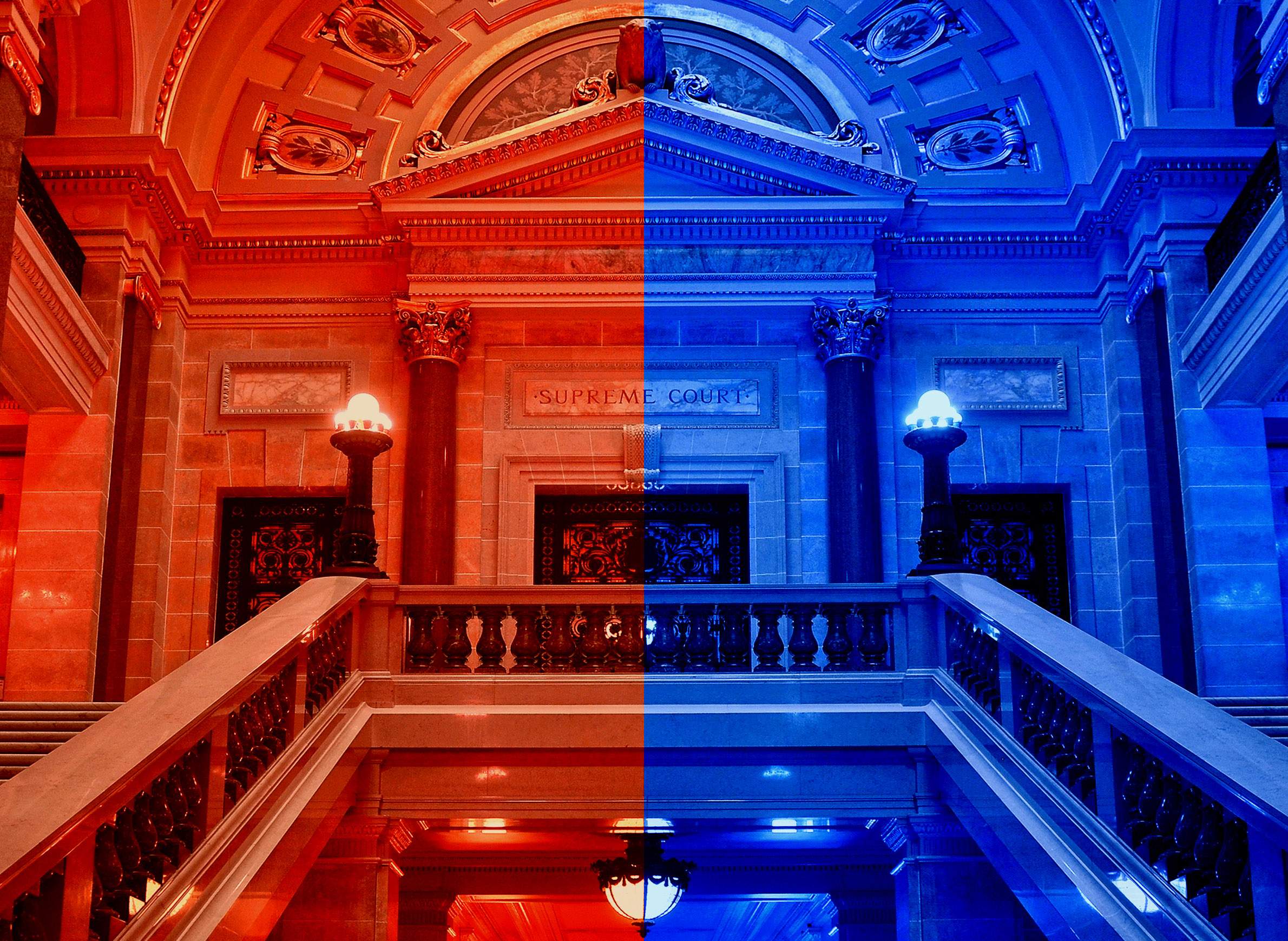 Illustration by Kristian Knutsen; photo via Richard Hurd (CC BY 2.0)

If there's one truism in American politics these days, it seems to be that political division is pervasive. State supreme court elections in the battleground state of Wisconsin are a perfect illustration of the powerful role that partisan divides can play in ostensibly nonpartisan races, even when the vote is conducted in the middle of a pandemic.

The spring 2020 elections in Wisconsin were certainly out of the ordinary, but even their dynamics reflected familiar partisan divisions in the electorate — and the courts.

After Gov. Tony Evers, a Democrat, issued an order the day before the April 7 election to halt in-person voting and extend the period for issuing and returning mail-in absentee ballots due to the COVID-19 pandemic, the state Supreme Court, in which conservative-leaning justices hold a majority, overturned that action in a complaint brought forth by Republican leadership in the state Legislature. Moreover, the conservative majority in the U.S. Supreme Court issued its own order that reversed a lower court's decision over lengthening the window in which mail-in ballots would be accepted.

The election went on to be held on April 7, though with significant deviations from typical practices. A sharp reduction in the number of available poll workers and concern by municipal leaders that the election would promote exposure to COVID-19 resulted in a very limited number of open polling places in some communities, particularly Milwaukee and Green Bay, resulting in long lines. Subsequent anger among the electorate about this sequence took on a markedly partisan character in comments by elected officials and party activists.

Indeed, amid all of these unique circumstances, partisanship was on full display in the race between Wisconsin Supreme Court incumbent Justice Daniel Kelly and challenger Jill Karofsky, a Dane County circuit court judge.

One need look no further than candidate endorsements to find clear partisan cues. Kelly was endorsed by President Donald Trump and Karofsky was endorsed by Joe Biden, the former Vice President and presumptive Democratic 2020 presidential nominee. Kelly was also connected to former Republican governor Scott Walker, who had appointed him to the bench in 2016. In addition, numerous partisan and ideological groups spent money in support of Kelly and Karofsky. For example, the liberal A Better Wisconsin Together Political Fund spent approximately $1.8 million supporting Karofsky, and the conservative Wisconsin Manufacturers & Commerce spent about $1.1 million supporting Kelly.

Although endorsements and campaign spending patterns provide a useful way of examining partisanship, it is possible to take a more systematic look at its role in nonpartisan court elections. One basic way to do so is to look at the relationship between county-level presidential election results and county-level state supreme court election results, and how much the votes in each are similar or different. Generally speaking, political scientists agree that presidential election results serve as a fairly good measure of the partisan leanings of a place.

A scatterplot chart shows the relationship between Hillary Clinton's share of the two-party vote in 2016 and the share of the vote garnered by Karofsky, and illustrates the intensity of partisan voting in 2020.

It is also useful to consider the 2020 election in the context of previous contests for Wisconsin Supreme Court seats.

The correlation between presidential and Wisconsin Supreme Court election results from 1996 to 2020 shows a trend toward increasing partisanship, particularly since the late 2000s.

That is, the correlation in 2020 is the highest in nearly a quarter-century of Wisconsin Supreme Court elections. In short, given the correlation of 0.94 for 2020, it appears the election between Kelly and Karofsky was slightly more partisan than the 2019 election. As for the 2019 contest between Brian Hagedorn and Lisa Neubauer, that race was itself the most partisan Wisconsin Supreme Court election since 1996. That said, the difference between a correlation value of .92 and .94 is quite small.

Overall, though, there is a steady trend toward increasing partisanship in each of the past several Wisconsin Supreme Court elections, including the 2018 contest between Rebecca Dallet and Michael Screnock, and the 2016 race between Rebecca Bradley and JoAnne Kloppenburg.

The next Wisconsin Supreme Court election will be held in 2023, though, so it will be a few years until it's possible to see if this trend holds.

Aaron Weinschenk is an associate professor of political science at the University of Wisconsin-Green Bay.