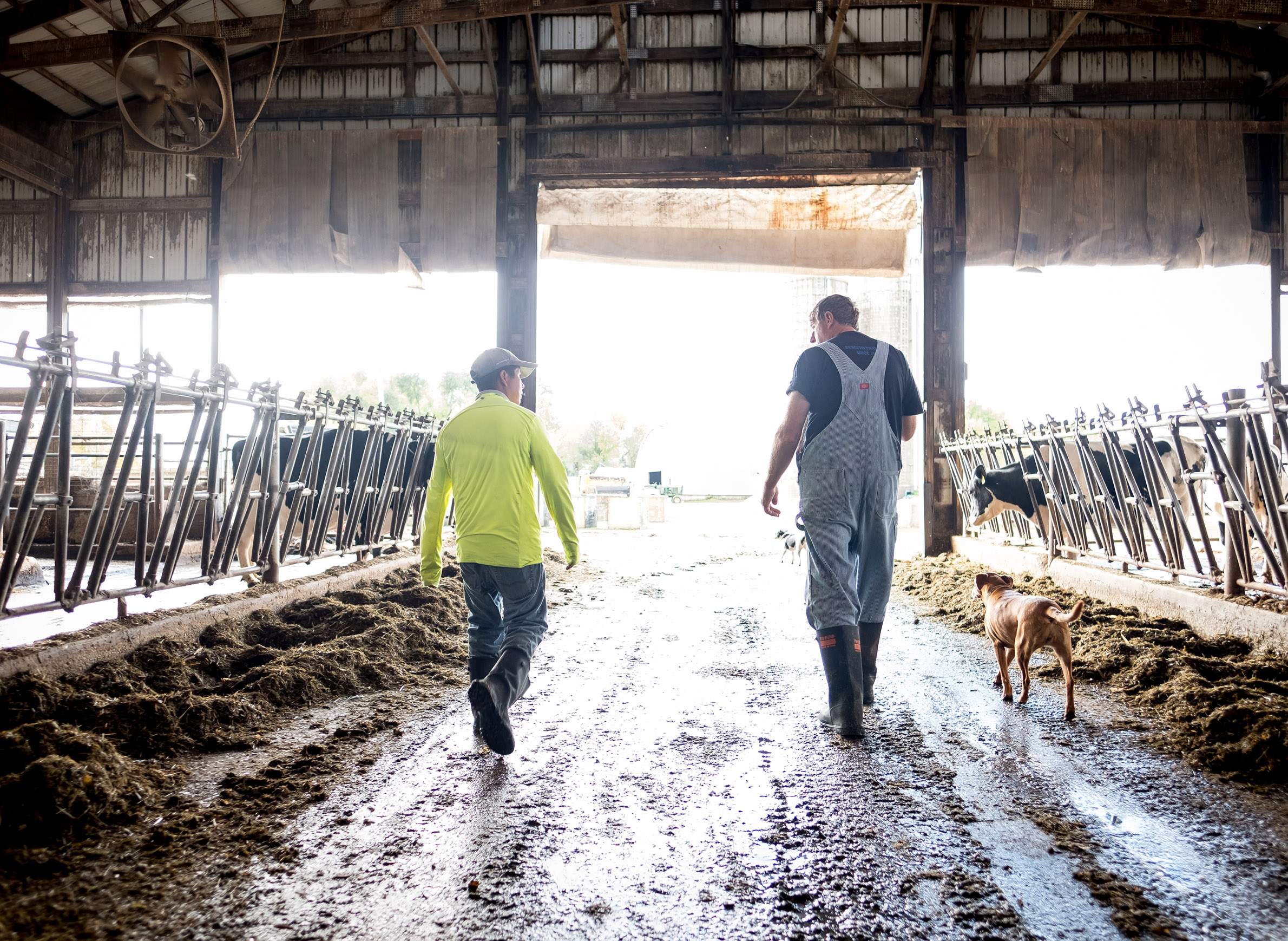 Caroline Yang for HuffPost
Roberto Tecpile (left) and John Rosenow (right), owner of Rosenholm dairy farm, walk through a dairy barn in Cochrane, in Buffalo County. Tecpile has worked for Rosenow for four years, feeding, cleaning and caring for cows, as well as fixing farm equipment. He hopes to return to Mexico in the next year or two to reunite with his wife and three children.

This story is a collaboration between HuffPost and the Wisconsin Center for Investigative Journalism.

Roberto Tecpile often puts in 70 hours a week at the Rosenholm dairy farm in Cochrane — a village in Buffalo County where winter days are short and can be bitterly cold. It is a job that farmers say most Americans refuse to do.

Tecpile, a native of Astacinga, in the Mexican state of Veracruz, has spent nearly 20 years in the United States, the past four working for farmer John Rosenow. According to his boss, Tecpile is the "go-to guy" for fixing farm equipment — whether it be a lawnmower or a gauge. Tecpile said the job is going well, and right now it is the most important thing as he prepares to return home in a year or two.

Tecpile is saving money to build a kitchen for his wife, Veronica, "with cabinets and everything." She currently cooks outside in their mountain village for their two sons, Kevin, 15, and Aaron, 9, and their daughter, Megan, 4.

"I want to work a little bit more … I want to buy a kitchen for my wife, and for the kids, I want them to have something better," the 39-year-old dairy worker said. "At times we say being able to be together would be much better, but at the same time, we still don’t have everything arranged." 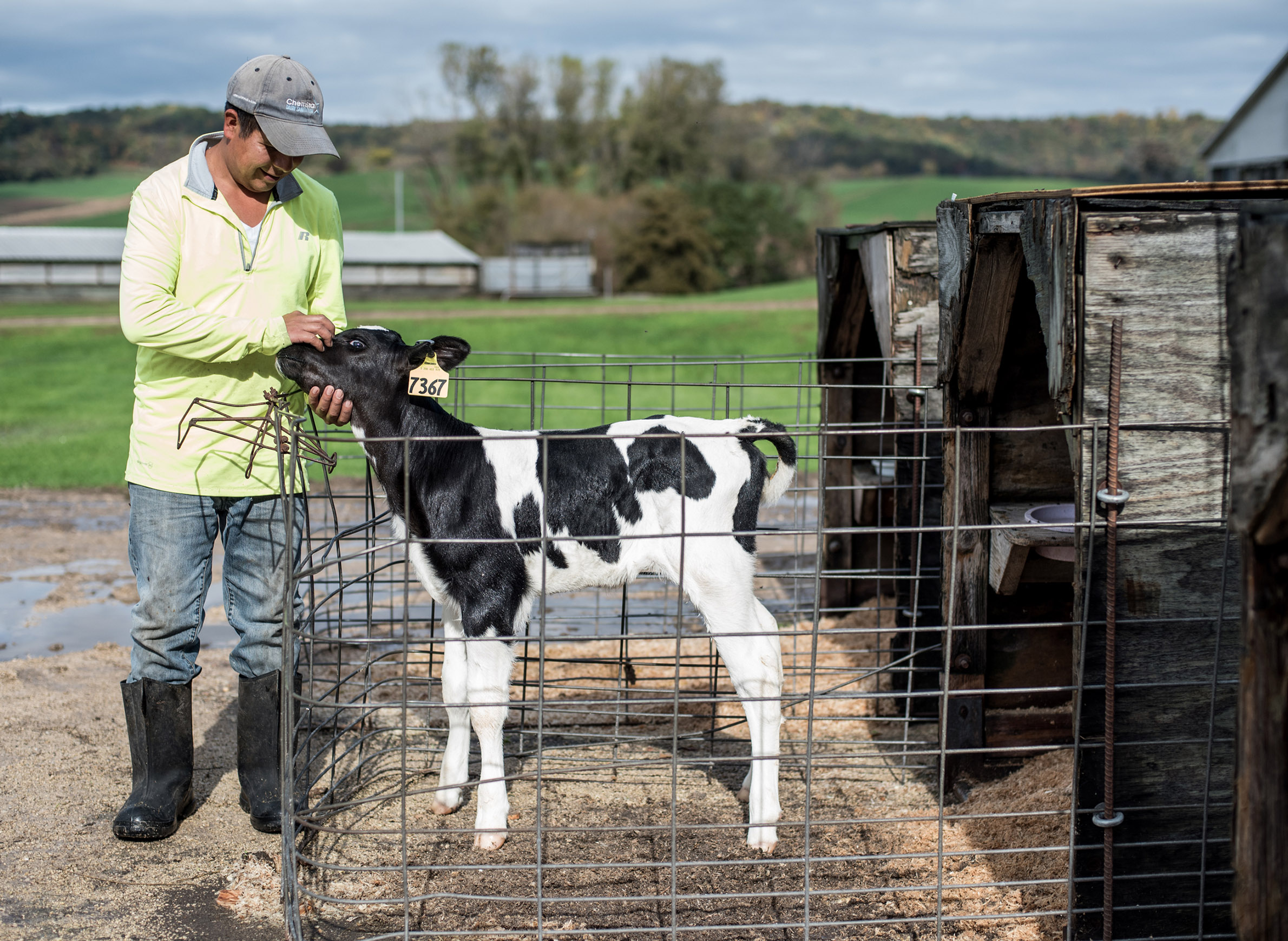 Caroline Yang for HuffPost
Roberto Tecpile, a native of Astacinga, Veracruz, Mexico, is seen with a 3-day-old calf at the Rosenholm dairy farm in Cochrane. Tecpile has spent nearly 20 years in the United States, the past four working for farmer John Rosenow.

Tecpile himself comes from a family of nine children, and it is difficult for him to be away from all of his family. But Rosenow makes sure they know Tecpile is being cared for and that he is working hard.

Rosenow has visited Tecpile's family twice in Astacinga. Rosenow's farm is one of 60 to 70 in western Wisconsin and southeast Minnesota involved in Puentes/Bridges, a small nonprofit that organizes annual trips to Mexico to bridge the cultural gap between farmers and their employees — and the physical gap between the workers and their families.

The program began in the late 1990s when immigrant workers began to show up on Wisconsin dairy farms. Immigrants now make up an estimated 51 percent of all dairy workers in the United States. Many of these employees are undocumented, making trips back and forth across the border dangerous.

Puentes/Bridges founder Shaun Duvall said she wanted to strengthen language skills and cultural competency so farmers could work better with their new employees.

She recalled that the program started as a challenge from a local University of Wisconsin-Extension agent who suggested, "There's a lot of farmers in Buffalo County that are hiring Mexican employees. Don't you want to teach these dairy farmers some Spanish?"

Shaun Duvall helped to found the Puentes/Bridges program to strengthen Spanish language skills among dairy farmers and increase cultural competency so farmers could work better with their employees. Here she visits one of her clients at a dairy farm in northern Buffalo County in March 2017. 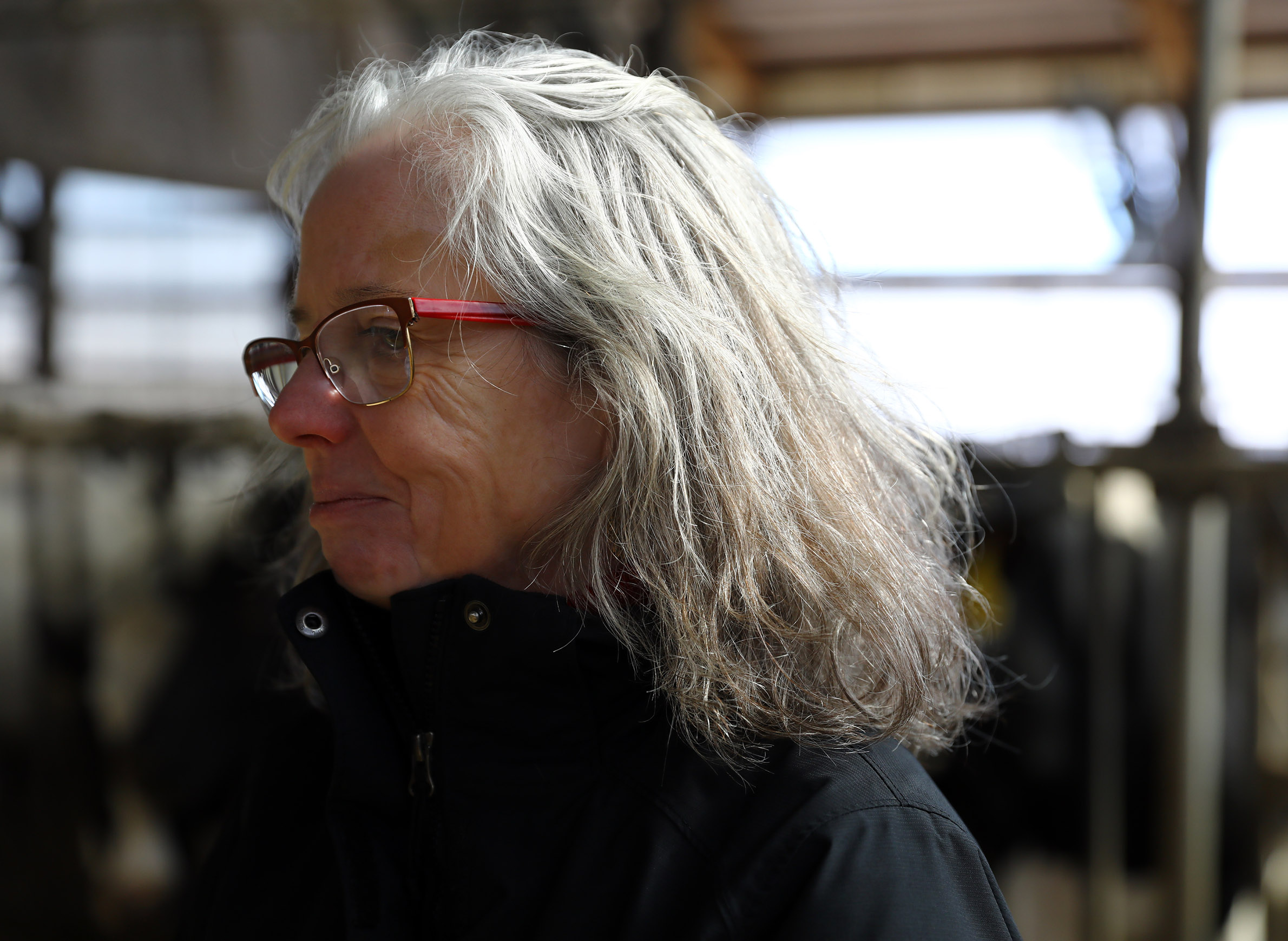 Today the program's overarching goal is relationship building. Rosenow, who is on the Puentes/Bridges board of directors, said the program has helped him gain insight into the lives of his employees, who risk detention — or even worse — in their quest for a better life.

"I understand a little bit of their motivation to put themselves in danger to come here and to work in a different climate and to make money," he said.

The effort runs counter to the anti-immigrant sentiment fueled by President Donald Trump, whose negative rhetoric and aggressive policies have included family separations at the border and a sharp uptick in arrests by U.S. Immigration and Customs Enforcement.

The first trip, in 2001, lasted 10 days — a week of intensive language classes, then time for farmers to meet the workers' families. But those meetings quickly took center stage as Duvall realized the personal interactions were most important.

"When [the relatives in Mexico] say to the farmer, 'I entrust my sons to you,' that's a pretty big moment. That's pretty powerful," she said.

Seven to 10 farmers accompany current Puentes director Mercedes Falk to Mexico on each year's trip. Often they travel to the state of Veracruz, which many Wisconsin dairy workers call home. The farmers pay their own way, about $2,000 for a weeklong trip.

Tecpile said five or six members of his family met with Rosenow when he first visited. 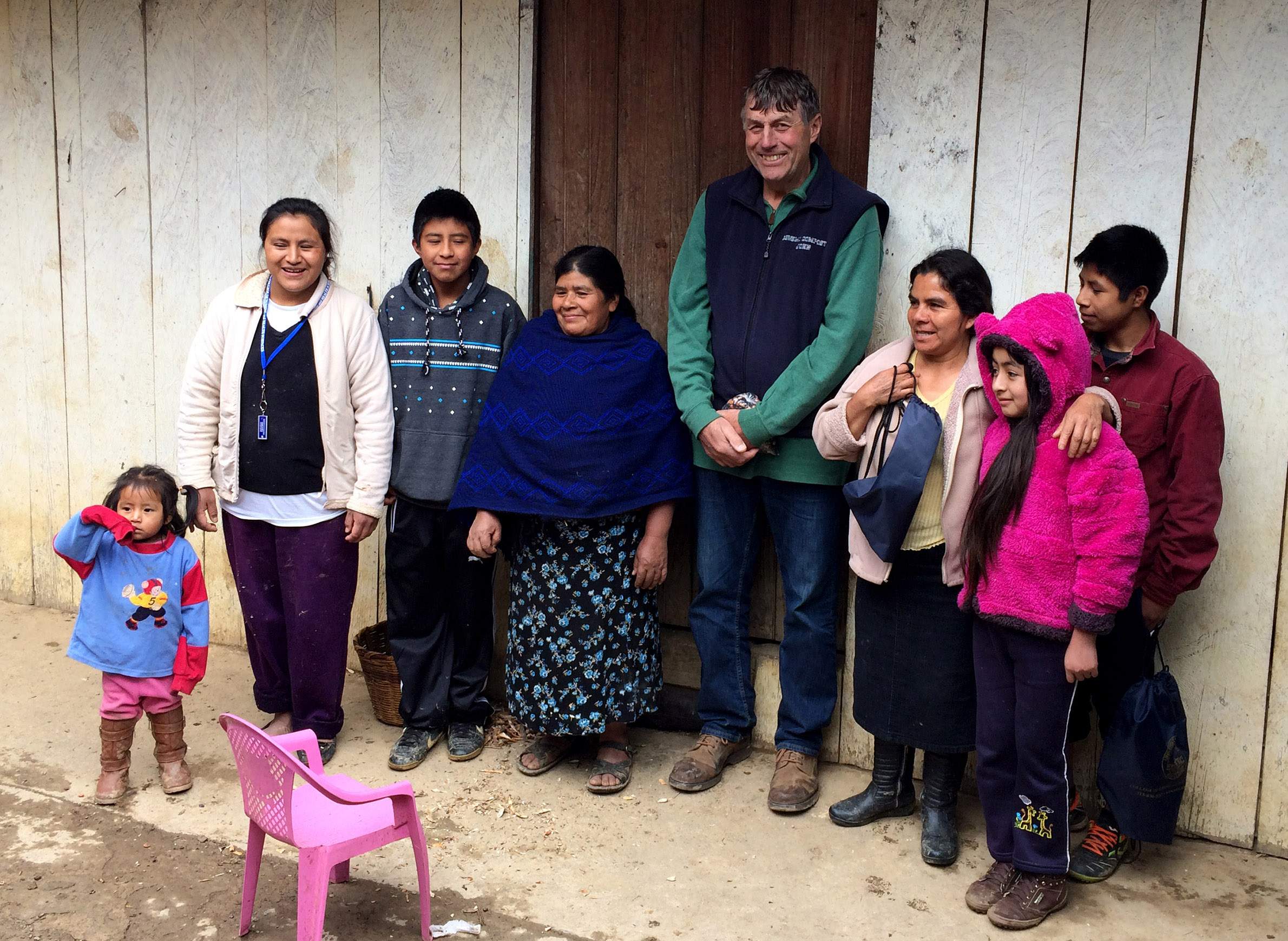 Courtesy of John Rosenow
John Rosenow is photographed with the family of his employee, Roberto Tecpile, at their home in rural Mexico in January 2017. Rosenow made the cultural immersion trip with a program sponsored by Puentes/Bridges to meet his employees' families and learn more about their lives.

The impact of Puentes/Bridges is felt not just in Mexico. Falk points to an instance of understanding in which a young employee, missing his wife and children back in Mexico, was neglecting to care for the calves on the farm. Instead of being upset that the work was not done, the farmer asked him what was wrong and if his family was all right.

"It may seem like a very simple no-brainer of how to approach it," Falk said. "But there's just so much going on on a dairy farm, it's really hard to slow down and deal with personnel issues when you have hay to make. When farmers understand where their employees are coming from, it just builds that caring relationship."

Taking health care to the workers

In addition to the Mexico trips, since 2012, Puentes/Bridges has also partnered with nursing students from the University of Wisconsin-Eau Claire to bring health care directly to the farms through the university's Health Care for Immigrant and Local Farmers Clinical Immersion program. Associate professor Lisa Schiller said the service evolved out of work she was already doing in western Wisconsin.

Schiller and senior-year nursing students make the trip to 19 dairy farms in nearby Pepin and Buffalo counties, outreach that is supported by the counties' public health departments. Twice a year, the students visit dairy employees to take blood pressure readings, give flu shots and screen for diabetes, high cholesterol, sexually transmitted infections and tuberculosis. She estimates they have cared for 435 people since the partnership began.

Cassandra Buerger, a nursing student at the University of Wisconsin-Eau Claire, takes a blood sample from Cristian R. (who did not want to give his last name), a worker from Mexico, during a health screening at the Rosenholm dairy farm in Cochrane on Oct. 10, 2018. As part of the university's Health Care for Immigrant and Local Farmers Clinical Immersion program, senior-year nursing students visit 19 dairy farms in Pepin and Buffalo counties to bring health care to farmers and their workers. 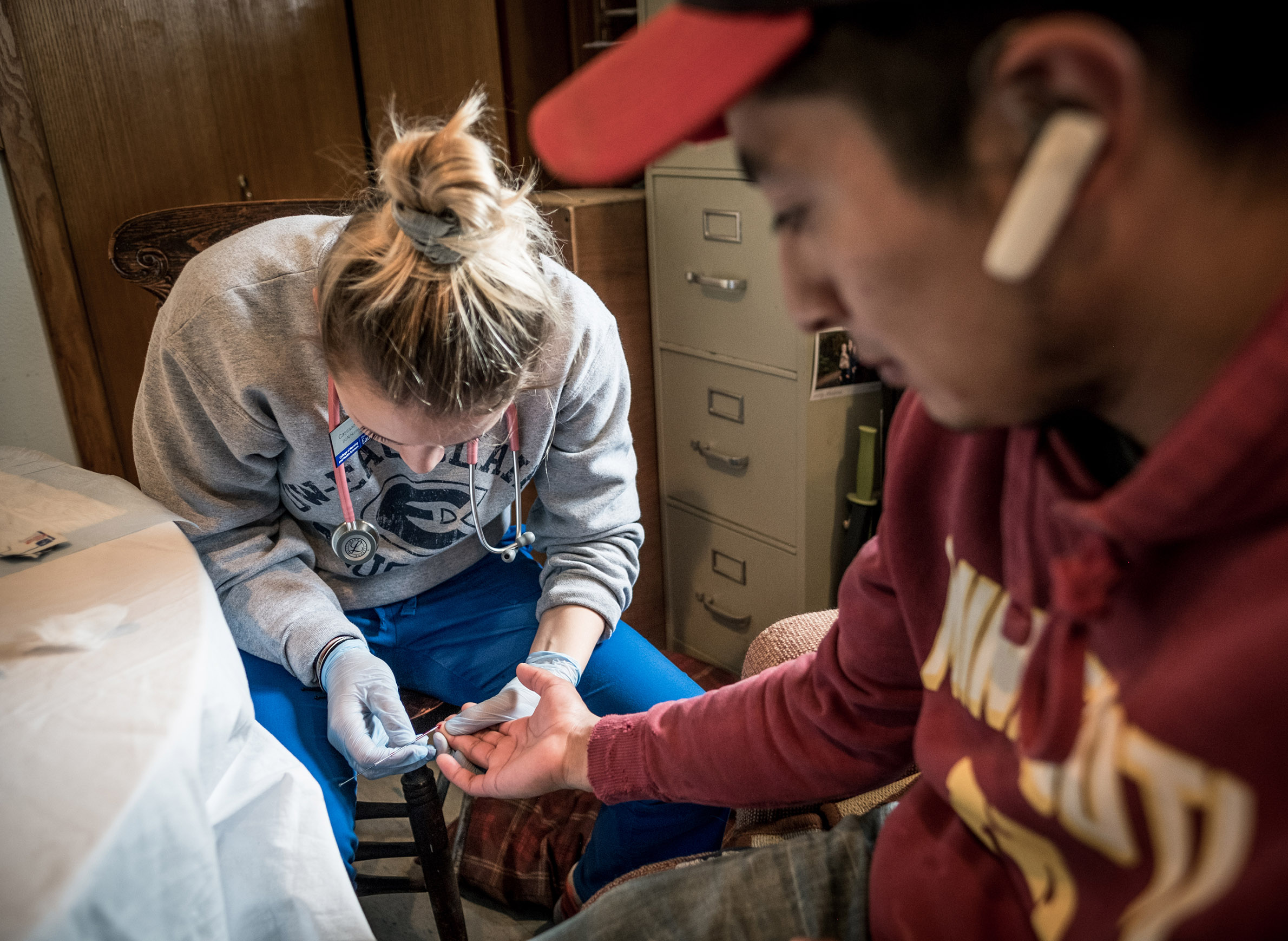 Schiller said the Puentes/Bridges program helps build trust between the workers and the nursing students.

"Working with Puentes has been key to the success of this program," she said. "Just because within the community, I think both the agricultural community as well as the immigrant community, there's this kind of reluctance to participate unless you know somebody."

The students also prepare lessons for the employees, offering information on personal and workplace health. Lessons might include proper lifting techniques, hearing protection or nutrition, including label-reading and portion size.

Puentes/Bridges provides interpreting services during the farm wellness visits as well as transportation for workers who need more advanced health care at the Chippewa Valley Free Clinic in Eau Claire.

Transportation is key, Schiller noted, as anyone in the United States without authorization cannot legally drive in Wisconsin. Many immigrant employees are now fearful of driving long distances to see a doctor because of the threat of being pulled over and deported.

The program also benefits the nursing students, Schiller said. The visits are the culmination of a monthlong preparation in which students learn the risks associated with agricultural work, which continually ranks as one of the most dangerous jobs in America. They also speak with an immigration attorney and make a trip to Rosenow's farm to see how it operates. 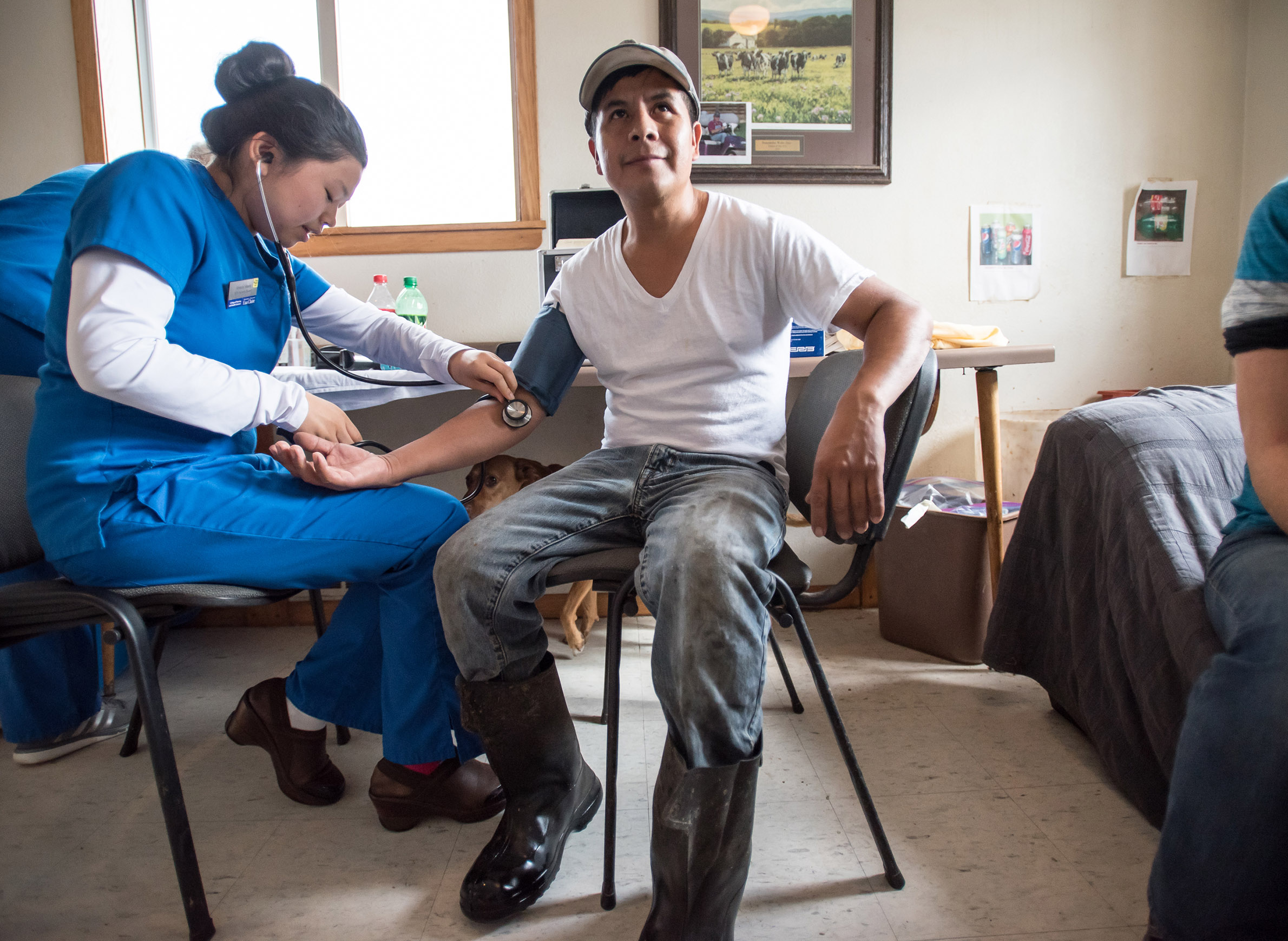 Caroline Yang for HuffPost
Roberto Tecpile has his blood pressure checked during a health screening by Amaris Vesely, a nursing student from the University of Wisconsin-Eau Claire at the Rosenholm dairy farm in Cochrane.

UW-Eau Claire nursing student Clarissa Tripp said the visits deepened her understanding of the struggles some immigrants face, such as the lack of a driver’s license to get to doctor’s appointments and the lack of health insurance to pay for care.

"I think it's easy to listen to the media and listen to the news and demonize people," Tripp said. "You just kind of place a stigma on people. They [immigrants] are here, working hard. They're just like you and I."

Those involved with Puentes/Bridges wish more people shared that understanding. Tecpile said it hurts to hear the president speak poorly about workers like himself. He would like Trump to consider creating a visa for year-round dairy employees. Currently only seasonal agricultural workers can get permission to work here.

"Without workers, the United States is nothing," Tecpile said. "We don't come to make problems. We come only to work."

Dave Gorak, executive director of the Midwest Coalition to Reduce Immigration, said he has no problem with cultural programs like Puentes/Bridges or with providing health care to immigrants. He said the bottom line is farmers should follow the law and protect American jobs.

"If you're going to bring in foreign workers," Gorak said, "just do it legally."

And if the dairy industry really cannot function without immigrants, Congress should change the law, said Gorak, whose group is based in La Valle, in Sauk County. 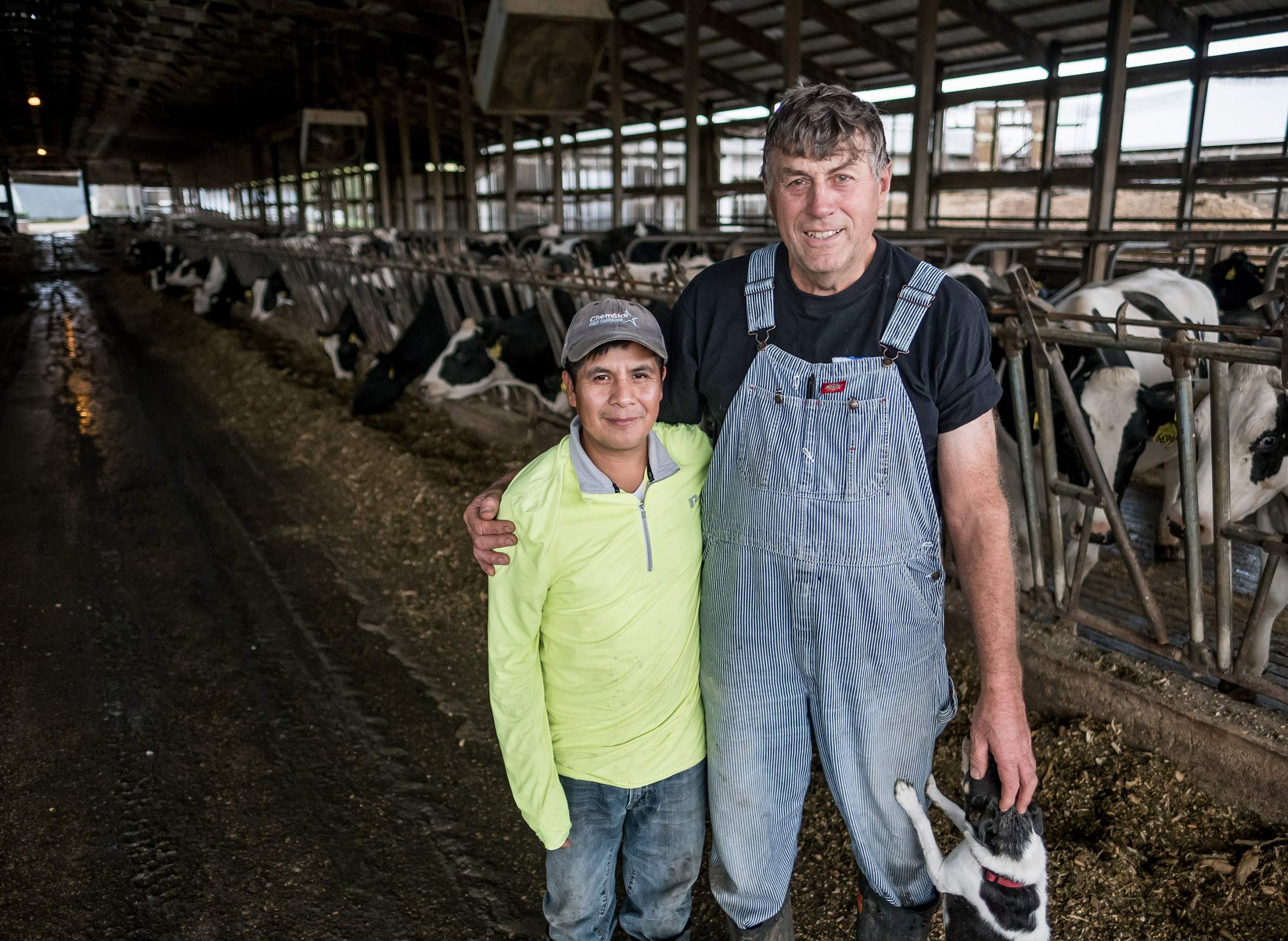 Caroline Yang for HuffPost
Roberto Tecpile, left, a farm worker from Veracruz, Mexico, and John Rosenow, right, owner of the Rosenholm dairy farm, pose for a portrait at the farm in Cochrane on Oct. 10, 2018. Tecpile has been working for Rosenow's farm for the past four years, with hopes of returning to his family in Mexico in a year or two. Rosenow's farm participates in the Puentes/Bridges program, a nonprofit organization that arranges annual trips to Mexico to help foster better understanding and relationships between farmers and their workers.

Dee J. Hall contributed to this report. The nonprofit Wisconsin Center for Investigative Journalism collaborates with Wisconsin Public Radio and other news media and the University of Wisconsin-Madison School of Journalism and Mass Communication. All works created, published, posted or disseminated by the Center do not necessarily reflect the views or opinions of UW-Madison or any of its affiliates.