Refugee Resettlement In Wisconsin Leveled Off In 2019 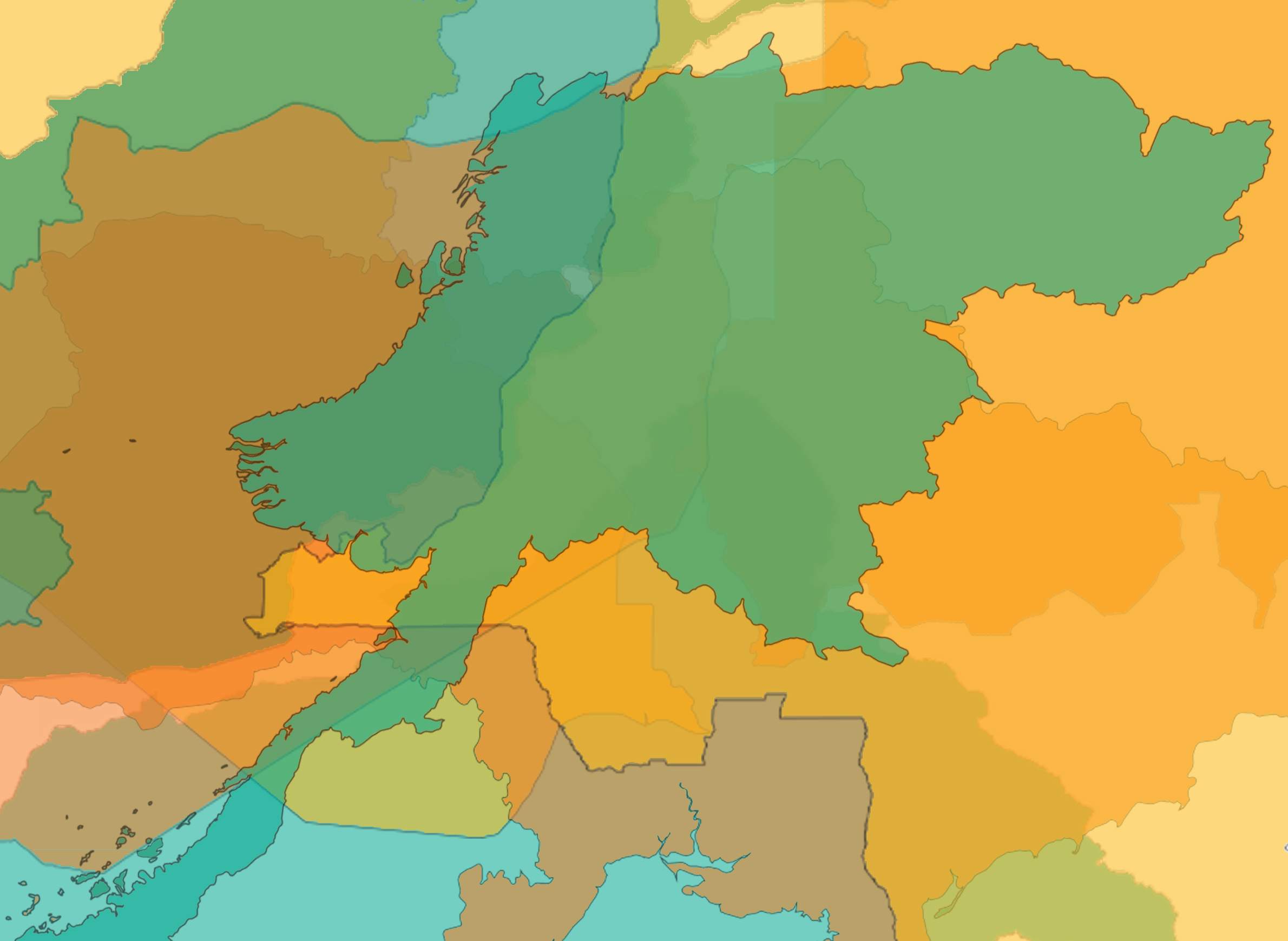 Illustration by Will Cushman

Following two years of steep drops, the number of international refugees who resettled in Wisconsin leveled off in 2019.

In all, resettlement agencies helped 480 refugees find new homes and reunite with loved ones in the state over the course of 2019, a slight uptick from the 472 refugees who arrived in 2018.

The small increase in Wisconsin was modest compared to an upswing in refugee arrivals reported nationally in 2019. More than 27,500 refugees resettled across the United States over that period, 20% more than in the year prior.

Still, resettlements in Wisconsin — and nationally — remain down significantly from a recent high in 2016. That year saw nearly 1,900 refugees resettle in Wisconsin, among almost 100,000 refugees who arrived in the U.S.

The sharp drop in resettlements since 2016 is a result of a U.S. president with a starkly different position toward immigration than his recent predecessors. Since assuming office in 2017, President Donald Trump has curtailed a refugee resettlement program that had been expanding under the administrations of former presidents Barack Obama and George W. Bush.

The Refugee Act of 1980 provides a baseline limit of 50,000 resettlements each year, but also gives the U.S. president broad authority to manage the flow of refugees by setting a higher or lower ceiling.

As part of his administration's broader crackdown on immigration, Trump has imposed much lower limits on refugee resettlement than his predecessors. During Obama's final year in office, his administration set a limit of 110,000 refugees to be allowed entry during the 2017 federal fiscal year, a 12-month period beginning on Oct. 1, 2016.

Changing federal policies are contributing to a shift in the flow of refugees across the U.S., including in Wisconsin.

The state has a decades-long history of welcoming refugees. In the 1970s and 80s, Wisconsin was one of three states (the others being Minnesota and California) where large numbers of Hmong refugees resettled after fleeing persecution in southeast Asia following the Vietnam War. Since then, tens of thousands of refugees from around the world have resettled in communities across Wisconsin.

In 2019, the refugees who arrived in Wisconsin hailed from more than a half-dozen nations, including Afghanistan, Central African Republic, Iraq, Somalia, Sudan, Syria and Ukraine. However, a vast majority of arrivals were fleeing violence and persecution in two nations: Burma and the Democratic Republic of the Congo. More than 200 refugees originally from each nation arrived in Wisconsin in 2019. And, for the first time, more refugees arrived in Wisconsin from an African nation than from any other, as the growing ranks of refugees from the Congo eclipsed those from Burma.

In another continuing trend, the share of refugees resettling in the Milwaukee metropolitan area shrank for the fourth straight year in 2019. Milwaukee and its suburbs still received more refugees than anywhere else in Wisconsin joining an established community in the region. But at the same time, only about 60% of the refugees who arrived in Wisconsin in 2019 resettled in and around Milwaukee. That's a much smaller share than the 85% of arriving refugees who resettled in the metro area in 2015.

Milwaukee's smaller share of newly arriving refugees coincides with growing communities in Dane County and the Fox Cities region. More than 60 refugees from several nations settled in Madison, the most since 2016, despite one resettlement agency closing its local office amid climbing housing costs.

Farther north, Appleton and Oshkosh are the epicenter of a fast-growing community of Congolese refugees, helping the Fox Cities maintain its status as the top destination for refugees in the state outside of Milwaukee. In 2019, 100 refugees from the Democratic Republic of the Congo resettled in Appleton, growing the region's Congolese refugee community to more than 400.

That community was non-existent as recently as 2013, when the first Congolese refugees arrived in Oshkosh, according to Tami McLaughlin, director of World Relief Fox Valley. World Relief is one of a handful of national resettlement agencies with a Wisconsin presence that coordinate local resettlement.

Unlike previous years, McLaughlin noted, nearly all of the refugees who have arrived in the Fox Cities since 2017 are joining family members already living and working in the area.

"In the past three years, 96% of our cases have been what we call 'U.S.-tied,' meaning somebody has come before them," McLaughlin explained. "Many of those are families that are reunified, which is just a wonderful experience on both ends: for the people who have been here to welcome their new family members and then for the new family members coming to have somebody there who’s already established."

At the same time, there were virtually no newly arriving refugees without existing family ties, McLaughlin said. Meanwhile tens of millions of refugees continue to live in camps and dangerous circumstances around the world, she added.

Refugees seeking resettlement in the U.S. must submit to a long and rigorous vetting process, beginning with a referral from the United Nations High Commissioner for Refugees to the U.S. State Department. For the small proportion of applicants who are accepted, the process usually concludes about two years later following extensive interviews and background checks conducted by the State Department and U.S. Department of Homeland Security. Reunification of refugees with their immediate families is a priority for the U.N. and the State Department, which may help explain why the many new arrivals to Wisconsin are joining family members.

Wisconsin's slight uptick in refugee resettlements in 2019 will very possibly be short-lived, said Tami McLaughlin, the World Relief Fox Valley director. She expects 2020 to be a very slow year for resettlement given the historically low limit of 18,000 refugees President Donald Trump has set for the fiscal year and how its first several months have already gone.

"We already see a huge effect," she said.

McLaughlin noted her agency hasn't resettled a single refugee since the start of the 2020 federal fiscal year on Oct. 1. World Relief is scheduled to resettle three family members from the Congo who will be joining their father and husband sometime in early 2020, though.

Meanwhile, in addition to the lower limit, Trump issued an executive order in September 2019 requiring states and local communities to provide written consent to resettlement within their borders. Communities that do not provide the consent by Jan. 21, 2020 will be considered off limits for resettlement.

Gov. Tony Evers declared the state's support for refugee resettlement in a Dec. 18, 2019 letter to the Trump administration, officially keeping the door open to refugees within the state. Additionally, nearly a dozen local governments in communities with sizable refugee populations have provided written consent to the state, according to Tom McCarthy, a spokesperson for the Wisconsin Department of Children and Families. These include the counties of Brown, Calumet, Dane, Eau Claire, Milwaukee, Sheboygan and Winnebago, as well as the cities of Green Bay, Madison, Milwaukee and Sheboygan. 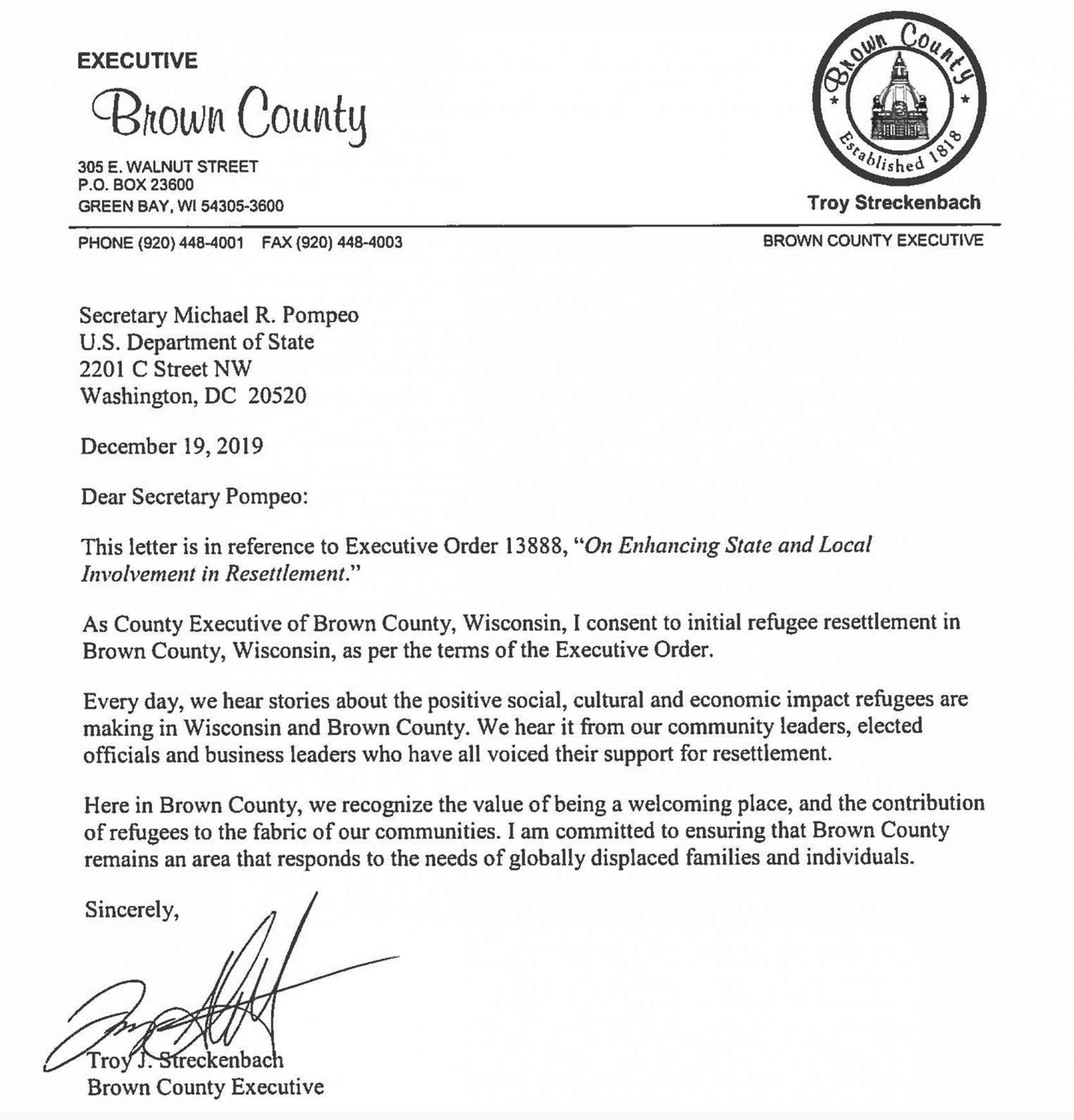 Brown County Executive Troy Streckenbach is one of several county and municipal officials in Wisconsin who have penned letters to U.S. Secretary of State Mike Pompeo in support of refugee resettlement in their communities.

Tim Hanna, the longtime mayor of Appleton, told WisContext that he also penned a letter of support for resettlement and has encouraged his colleagues at the municipal and county levels to do the same.

"We have worked really hard to create a culture here in Appleton that is welcoming and inclusive," said Hanna, emphasizing the contrast between that effort and the violence and persecution refugees have fled.

"We want to be a city that's looked at as welcoming and inclusive and respectful of every single person," he said.

Hanna also highlighted the economic benefits newcomers can bring to a community. Wisconsin continues to experience historically low unemployment and a labor shortage as employers seek to recruit and retain workers. The state is also contending with long-term demographic trends — an aging population, fewer births and more Americans moving out of the state than to it — that will likely continue to stretch its workforce for years.

Crystal Redmann, regional director at IQ Resource Group, a staffing agency in Appleton that connects workers with manufacturers, said the community's newly arrived refugees are a sought after group for local employers.

"Some go into food manufacturing, [and] others into machine operation at plastic and paper companies in the area, where they're operating skilled machines and being trained to do that from the ground up and doing quite well at those positions," Redmann said.

"They're one of the most talented workforces," she added.