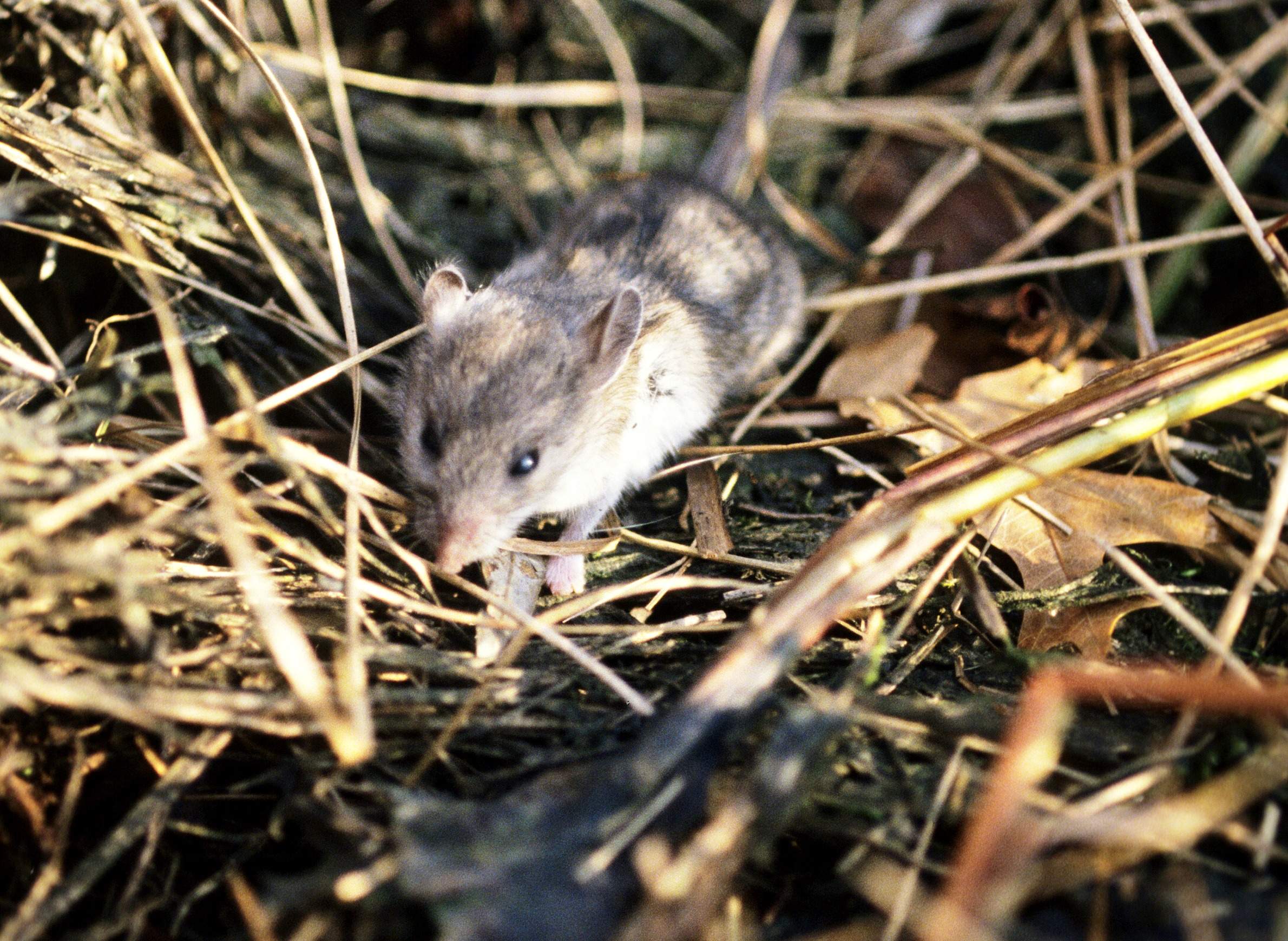 The white-footed mouse is a common carrier of the bacteria that causes Lyme disease.

The creature primarily responsible for infecting people with the bacteria that causes Lyme disease is the black-legged tick, often called the deer tick. When it comes to the tick's life cycle, though, deer aren't the most important animals it encounters in Wisconsin. That distinction belongs to much smaller mammals.

White-tailed deer once played an important role in tracking the spread of deer ticks in Wisconsin. Researchers used to pair with hunters to inspect animals shot during the annual gun deer season, in order to track black-legged ticks around the state. But they haven't done so since 2009. Once ticks spread to essentially every corner of Wisconsin, that approach wasn't very helpful anymore, said University of Wisconsin-Madison entomologist Susan Paskewitz.

Studying deer populations probably won't yield up more insight into Lyme disease itself or its spread in Wisconsin, Paskewitz explained. Deer don't seem to get infected very often, and most deer ticks found feeding on deer have been adults, which means they won't be passing on any pathogens they've picked up to humans. In short, when it comes to Lyme disease, deer do not play an important role as what are known as natural reservoirs, animals that host pathogens.

"The main role for the deer is they're serving as a real easy and readily available source of blood for the ticks," Paskewitz said.

Black-legged ticks (Ixodes scapularis) pass through three life stages: larva, nymph, and adult. At each stage, the tick attaches itself to a host and consumes a blood meal. Larva- and nymph-stage ticks can pick up the pathogens that cause Lyme and other diseases from their meals, and then pass it on to whatever they happen to feed on in their next life stage. That may be a human, or it may be another animal host that some other tick may feed on in the near future. Either way, the presence of pathogens in the various animals black-legged ticks feed on has a significant impact on Lyme disease risks for people.

There are also regional nuances in the black-legged tick's lifecycle: In the upper Midwest, a relatively brief warm season means there's a lot of tick activity going on over a short period of time, which can amplify the relationship among ticks, pathogens and host animals, with different implications for different diseases.

Ecologists and entomologists have primarily focused on the white-footed mouse (Peromyscus leucopus) as a leading and possibly the leading reservoir for Lyme disease. But over time, researchers have discovered that other small mammals play a role in spreading the disease, including other mice, voles, chipmunks and shrews. Ticks feed on birds, but researchers generally believe they're weak reservoirs, with some exceptions, particularly robins and song sparrows. Ticks also feed on lizards, but that's a whole other matter: Some species, including the western fence lizard and five-lined skink actually slow down the transmission of Lyme disease.

What's much harder to figure out, though, is how big of a role any given species plays in the overall rate of Lyme disease transmission in a given area. The disease is caused by spirochete bacteria in the Borrelia genus; in North America, these include Borrelia burgdorferi and the much more recently discovered Borrelia mayonii.

The gray squirrel is one species being studied in Wisconsin for its role in transmitting bacteria that cause Lyme disease. 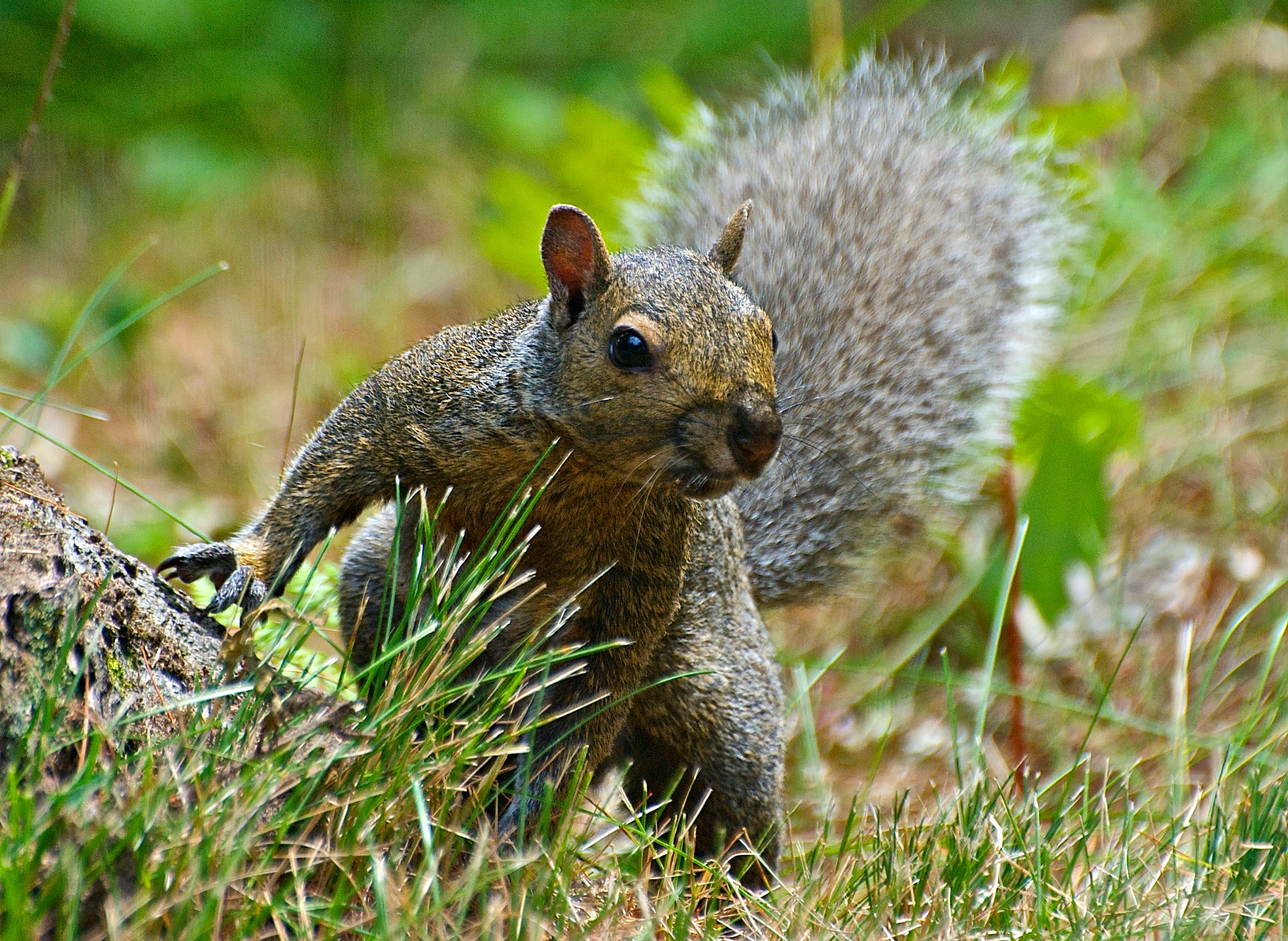 As for other small mammals, Paskewitz says it's difficult to trap shrews for research. These small mammals, which are not rodents, often die if left in a trap overnight, and any ticks will clear off quickly once the host animal's blood begins to coagulate.

Even when it comes to other mammals living in tick habitat, not enough is known about those that don't do much harboring of the disease, said Richard Ostfeld, a disease ecologist with the Cary Institute of Ecosystem Studies in Millbrook, New York.

The underexplored role of birds

Researchers have historically focused less on how birds might play into the spread of Lyme disease, but that's beginning to change. Howard Ginsberg, a Rhode Island-based research ecologist with the United States Geological Survey, led a 2004 study that examined the "reservoir competence" — that is, the ability to host pathogens until ticks pick them up through feeding — of six North American bird species. However, tracking birds is perhaps even more slippery than tracking mammals, especially when one needs to understand their population numbers in a given area, their relationship with ticks and how their presence may be connected with human infections.

"It was very difficult to get population estimates for birds largely because a lot of the birds that came through were migrants," Ginsberg said.

By collecting wild birds and letting larval ticks feed on them, Ginsberg and his collaborators found that 16 percent of ticks that fed on American robins (Turdus migratorius) — Wisconsin's state bird — were infected with Lyme disease. On the other hand, the study found "little evidence of reservoir competence" for other species, including eastern towhees (Pipilo erythrophthalmus) and brown thrashers (Toxostoma rufum). 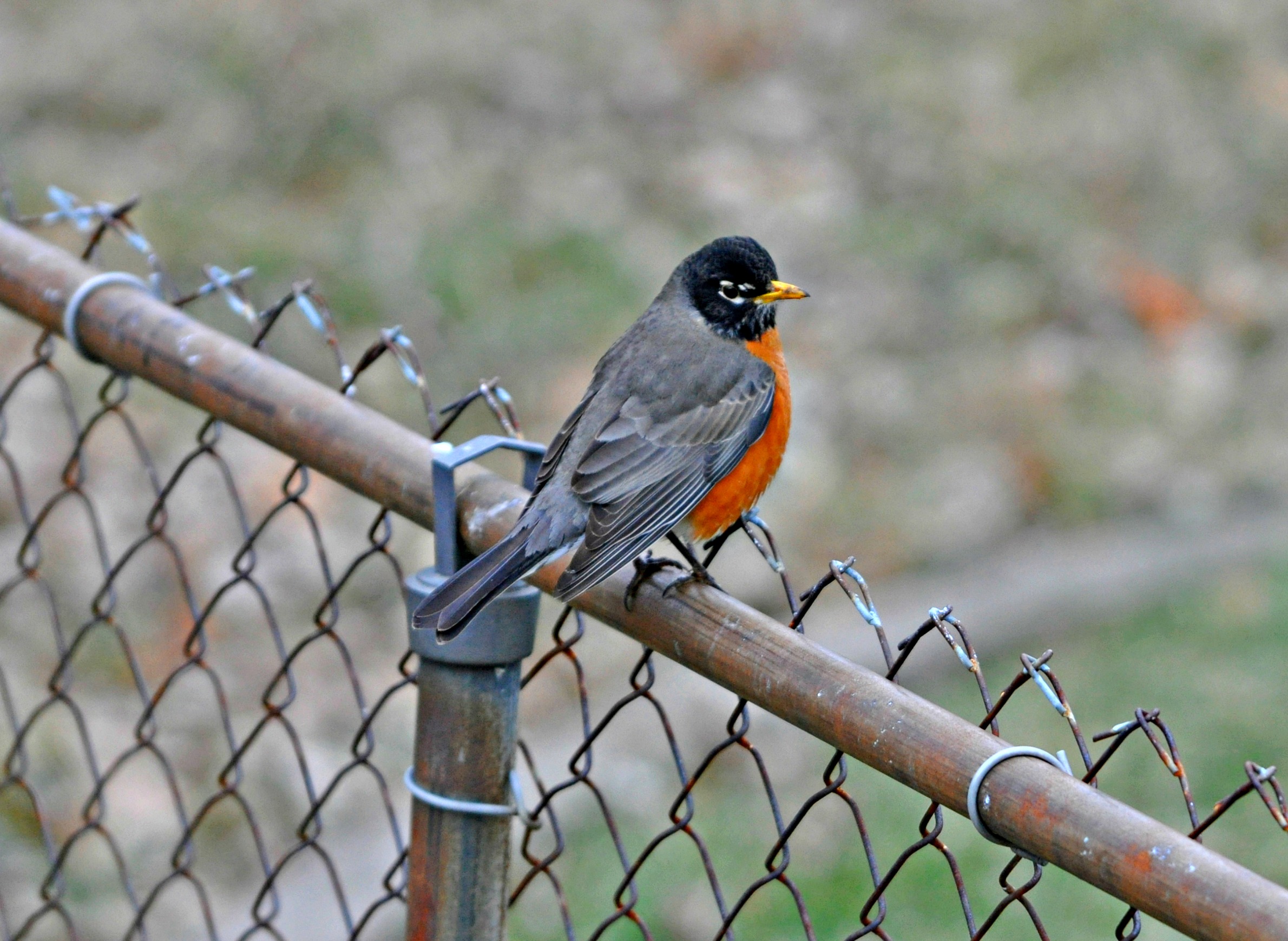 Heather Paul (CC BY-ND 2.0)
The American robin, which can carry bacteria that cause Lyme disease, is attracted to suburban habitats.

Robins are "probably not comparable to mammals" in the grand scheme of Lyme disease, Ginsberg said. Even if biologically well-suited to incubating the bacteria, bird populations often are simply not as dense as populations of small mammals in tick habitat. But they can travel much greater distances, which is important for understanding their role in spreading Lyme disease.

In fact, Erica Newman, a postdoctoral researcher in ecology at the University of Arizona, believes birds will be an important part of a northward spread of Lyme disease due to their migratory travels, as much as or even more so than small mammals. She broadened the scope of research on bird reservoirs with a 2015 study that looked at 53 different species of bird in northern California.

Lyme disease follows a much different partner in California than in the upper Midwest. The bacteria is transmitted by a different tick species, called the Western black-legged tick (Ixodes pacificus). Those ticks pick up Borrelia from a different mammal, the nocturnal dusky-footed woodrat. (The white-footed mouse's range extends as far west as Arizona, but stops there.) But given the wide range and migratory lifestyles of many birds, their ability to harbor Borrelia has implications across North America.

"There are ticks everywhere in North America," Newman said. "What we are concerned about is the prevalence of infected ticks.In this case, birds will certainly play a role in the northward spread of infection. The other issue is that birds that carry Lyme disease spirochetes are good at living close to us. Many birds don't carry spirochetes, but the ones that do, including American robins and dark-eyed juncos, love watered lawns and suburban habitats."

Newman's study identified several more bird species that serve as competent reservoirs for Lyme, including the golden-crowned sparrow (Zonotrichia atricapilla). She also discovered that birds can become infected with Borrelia bissettii, a bacteria species that has caused a Lyme disease-like illness in patients in Europe and North America. However, when larval ticks fed on birds in California, they were more likely to pick up Borrelia burgdorferi than Borrelia bissettii.

This finding highlights other obstacles to understanding how Lyme disease bacteria spread among different species. It's difficult to parse out distinct species of bacteria from an avian blood sample. And bacteria that has infected a bird might not even be in its blood — rather, it can be sequestered in the skin or other organs. That may be why birds in Newman's study were passing on Borrelia burgdorferi to ticks more often than bacteria that actually showed up in the birds' blood.

"We don't even know what tissues we should be sampling in order to determine what species of bacteria the birds are carrying to begin with," she said.

Newman explained that researchers will collect samples of mammals' skin, but won't sample the skin of live birds as it's is more likely to cause infection or other long-term, possibly fatal, harm.

"There's a lot of unknowns about the interactions with wildlife, and it's not just because of the huge numbers of species that we have to sample," she said. "Even the mechanisms are under-studied."

Another aspect in the spread of Lyme disease that scientists are still trying to understand is what role predators play. In Wisconsin and other states, carnivores like the red fox can prey on white-footed mice, which in theory could cut down on a mouse population's ability to host Borrelia bacteria. The white-footed mouse's reliance on acorns for food creates a whole other complex web of interdependencies.

Additionally, while deer do not serve as good reservoirs for Lyme disease, their blood is still a reliable food source for black-legged ticks. That means culling the deer population could in theory help cut down on Lyme disease, suggesting a role for hunters or Wisconsin's ever-controversial wolves.

"You may be regulating the abundance of ticks due to habitat changes driven from the predator level," University of Arizona ecologist Erica Newman said.

The red fox is a common predator of rodents and other small mammals that carry Lyme disease bacteria. 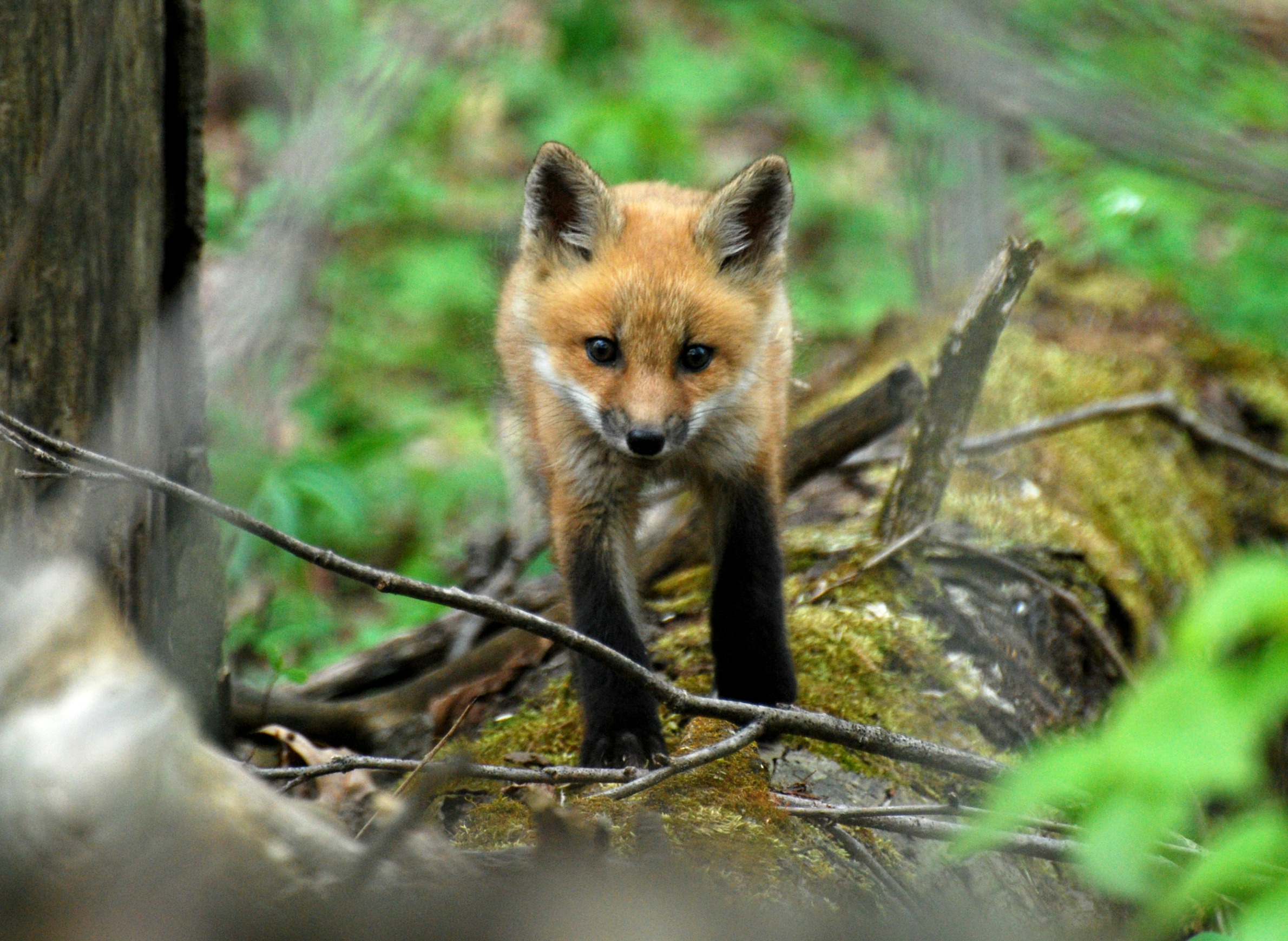 USGS researcher Howard Ginsberg is skeptical that predators can do much to regulate Lyme disease. Rodent populations can fluctuate a lot from year to year regardless of what predators are doing, he said.

Richard Ostfeld of the Cary Institute is less dismissive.

"The role of predators is probably quite big but poorly studied. Some predators like foxes, bobcats, and some owls can regulate rodent populations," he said. "This would serve to reduce the ability of rodents to amplify numbers of infected black-legged ticks."

The issue, Ostfeld explained in an email, is that "predators are notoriously hard to study. They're big, use huge areas, and are hard to observe. It's hard to quantify exactly what they eat (which species), how many, and in what schedule. All these things are important parameters to estimate their impact on the small-mammal reservoirs. Imagine how hard it would be to conduct a predator-removal or -reduction experiment."

Despite the unknowns, the complexity of animal reservoirs highlights how human decisions can aid or limit the spread of Lyme disease. Public health officials may often feel stuck repeating the same Lyme disease prevention tips summer after summer, but decisions on other levels may indeed have meaningful impacts on human health. For instance, in California, Newman has examined how efforts to remove chaparral as a wildfire-prevention measure has transformed parts of the landscape such that it attracts more of the wild birds now known to carry Borrelia bacteria.

Wildfires are less of an issue in Wisconsin, but other challenges like deer and wolf management, and forest fragmentation, might be a factor in Midwestern efforts to curtail tick-borne illnesses.