University Place: From Food To Fibers To Fire, The State's Flora Is A Bounty For Foraging
Will Cushman
WisContext
Video:
University Place
PBS Wisconsin
Aug. 27, 2019 | 3:30 p.m. 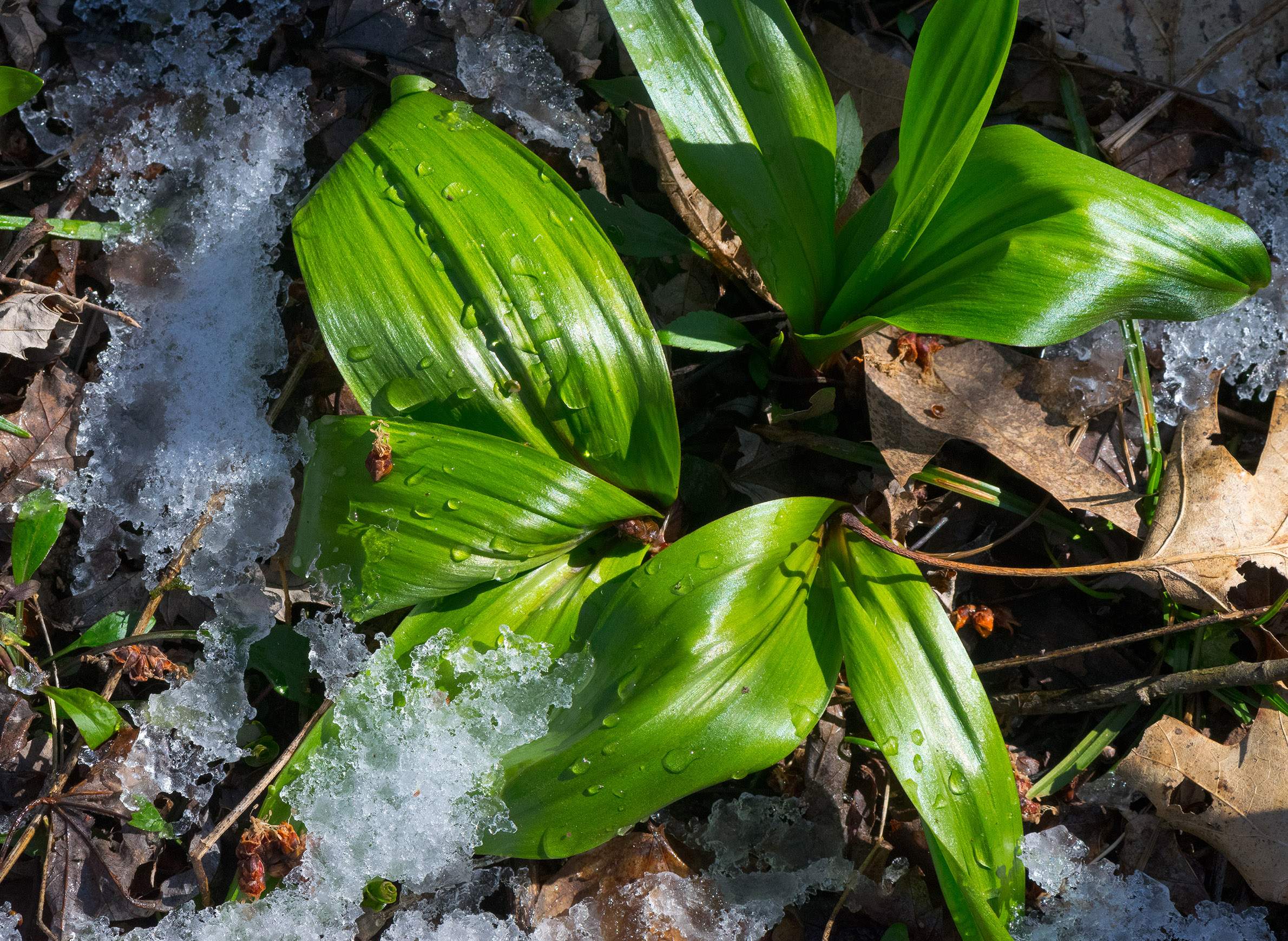 Joshua Mayer (CC BY-SA 2.0)
The ramp, or wild leek, should be harvested selectively to maintain the population in a foraging area.

Farmers grow a whole lot of crops in Wisconsin, but the state's wild places, not to mention its sidewalk cracks, are also home to edible and handy plants for anybody enterprising enough to find and gather them. The uses of Wisconsin's wild bounty are as diverse as the plant communities native to the region ⁠— or in some cases, those that have colonized it. From the sought-after ramp to the lowly lambsquarters, many wild plants in Wisconsin are surprisingly useful, and for more than simply eating.

That's the mantra of David Eagan, a former honorary fellow in the Department of Botany at the University of Wisconsin-Madison and a lifelong forager. Over the decades, he has assembled a wealth of knowledge about the surprisingly varied uses of many wild plants in Wisconsin and the upper Midwest, both from personal experience deep in the woods and through scholarship.

Eagan described many of these uses in a Feb. 10, 2018 talk at the Wisconsin Garden & Landscape Expo, recorded for Wisconsin Public Television's University Place. Eagan touched on about two dozen native and non-native plant and fungus species that can be eaten, turned into rope, used to start a fire or packed as insulation. Here's a look at a handful of those species.

It's important to practice care when foraging by only consuming positively identified species and sticking to gathering rules on public lands. Here's more info about a handful of the species Eagan discussed.

The American basswood (Tilia americana), also known as the linden, is a common tree in some Wisconsin forests and planted in cities to provide shade. But basswoods provide more than a simple respite from the summer sun. Their tender early-spring leaves are edible raw, said Eagan. He described the springtime bounty of what he called "basswood salad" as "delicious."

More importantly, Eagan noted the basswood’s fibers, which make it an ideal plant for producing twine, or cordage, which comes from the tree's inner bark. In fact, the tree’s inner bark was long a resource of native communities for producing cordage. The process is fairly involved and takes several weeks to complete, but the reward is highly functional and durable ropes that can be put to use in any number of ways.

Another Wisconsin plant that's useful for producing twine is Canadian wood nettle (Laportea canadensis), which grows best in forested river valleys. According to Eagan, this plant is common along the bottoms of the Mississippi River and the lower Wisconsin River. Making twine from wood nettle does not require as much processing as from basswood, but is more labor intensive and requires more plants per length of the cordage, Eagan said.

Found across Wisconsin, milkweed is well-known as important habitat for monarch butterflies, but different parts of the plant also provide versatile uses for humans. For instance, both the leaves and the flowers of common milkweed (Asclepias syriaca) are edible after a brief boil. Tender springtime shoots are especially tasty, Egan said, if there are enough to spare a few. And parts of the common milkweed plant are also useful as an insulator (seeds), fire starter (seeds), glue (sap) and for twine-making (fibers).

Marsh milkweed (Asclepias incarnata) boasts far superior fibers for cordage, explained Eagan. To harvest the plant for its fibers, he said it is best to wait until after winter kill and the stems are dry.

Sometimes called the "supermarket of the swamp," the cattail (Typha spp.) is another plant of many uses. Native communities have long harvested cattails for all sorts of ceremonial and practical purposes. These applications include using the leaves for matting and insulation and collecting male plants' bright yellow pollen for ceremonies. Eagan said the pollen can also serve as a flour for cooking and baking. Other parts of the cattail plant, including its corms just below the soil surface, are edible and easily cooked.

As its nickname suggests, the cattail is a wetland plant. Three species of cattail grow in Wisconsin, including one native and two invasive species.

One common Wisconsin plant with a unique use is rough horsetail, also known as scouring rush (Equisetum hyemale). Its use? Scouring, as well as polishing. Scouring rush grows in wet open woodlands and riparian zones near river bottoms. When several rushes are harvested and bundled together, they work as an effective scouring pad for pots and pans, thanks to a high amount of silicates in the plant.

"It's like a little bit of sandpaper," Eagan said. 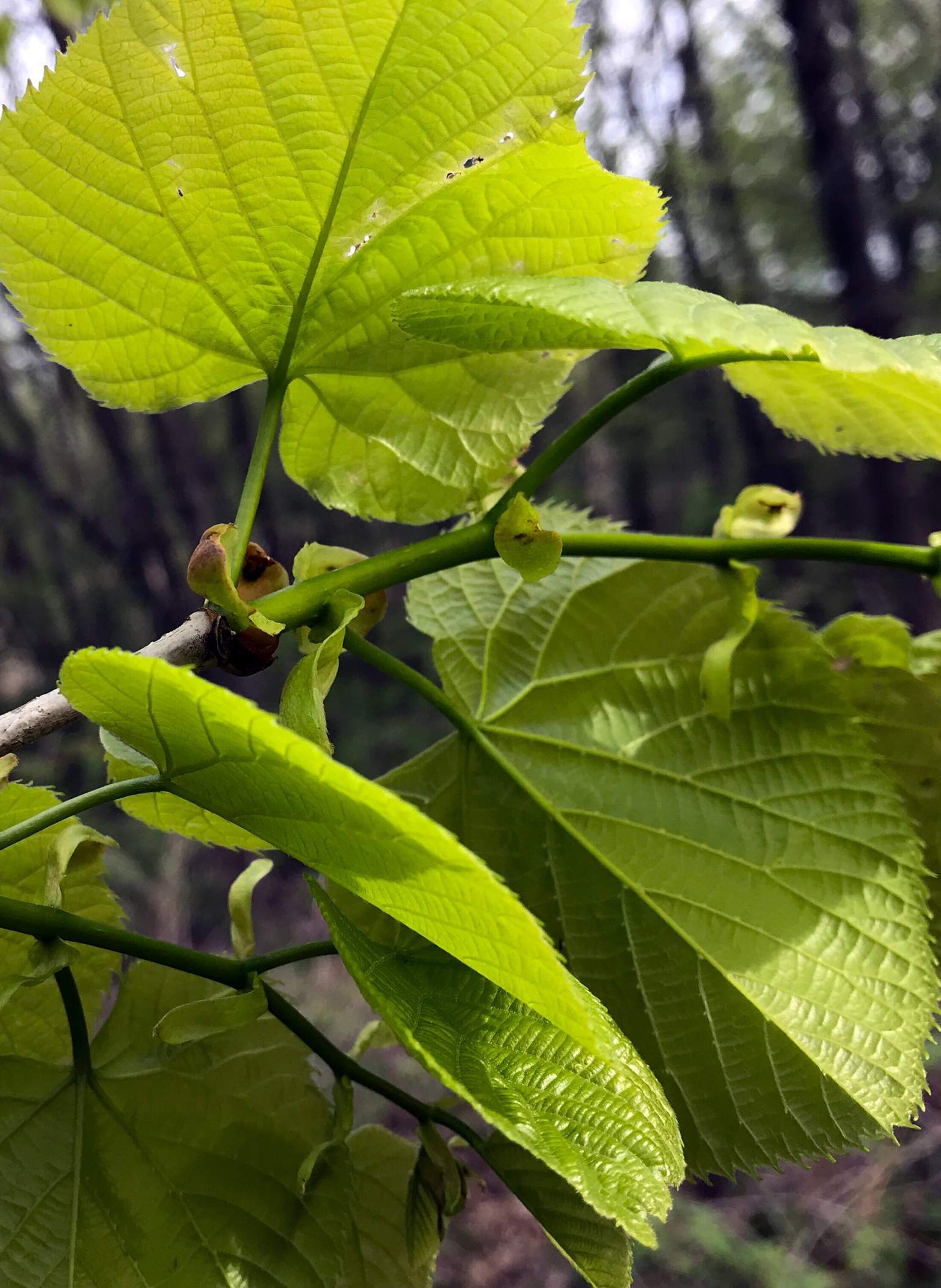 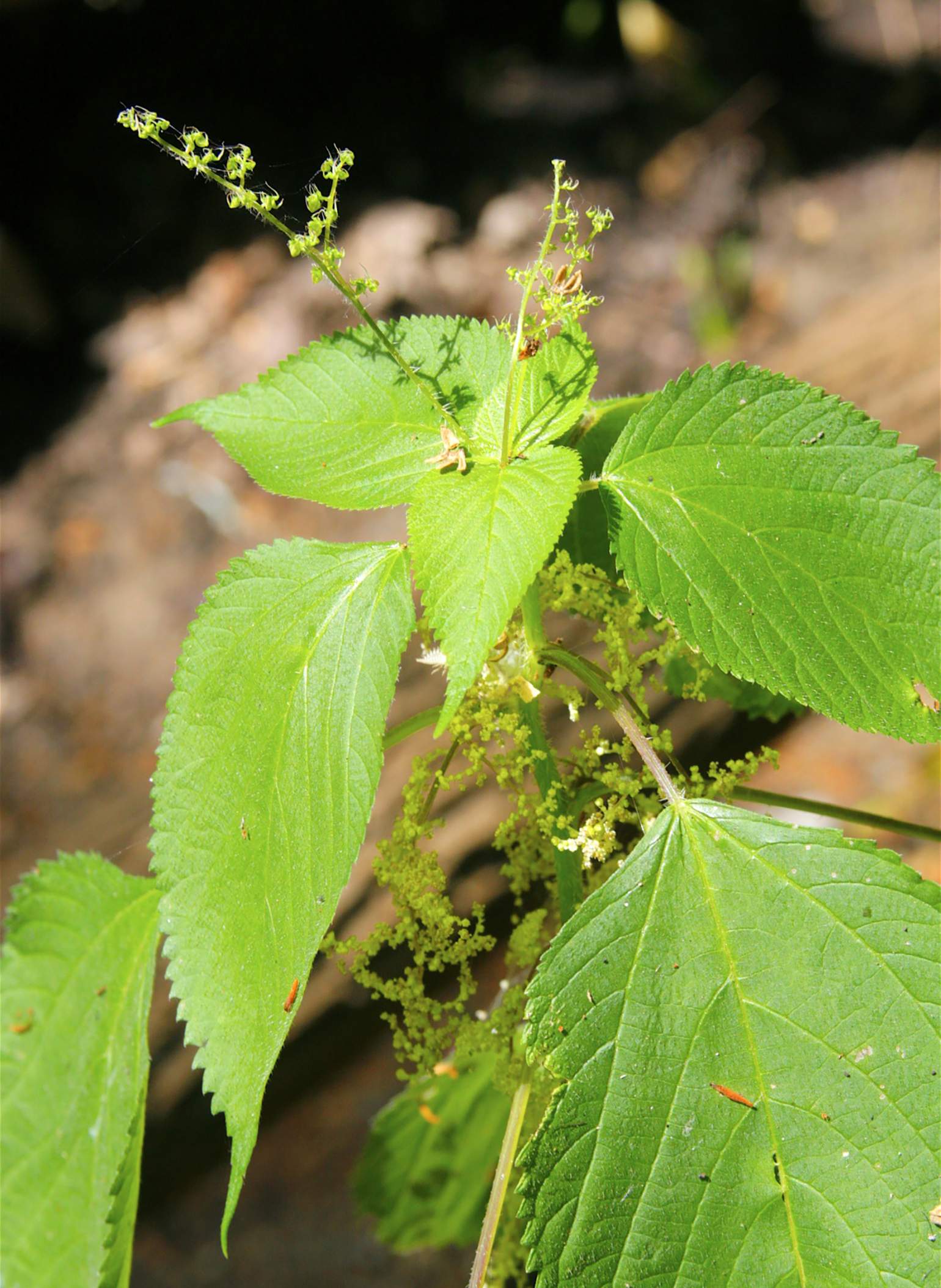 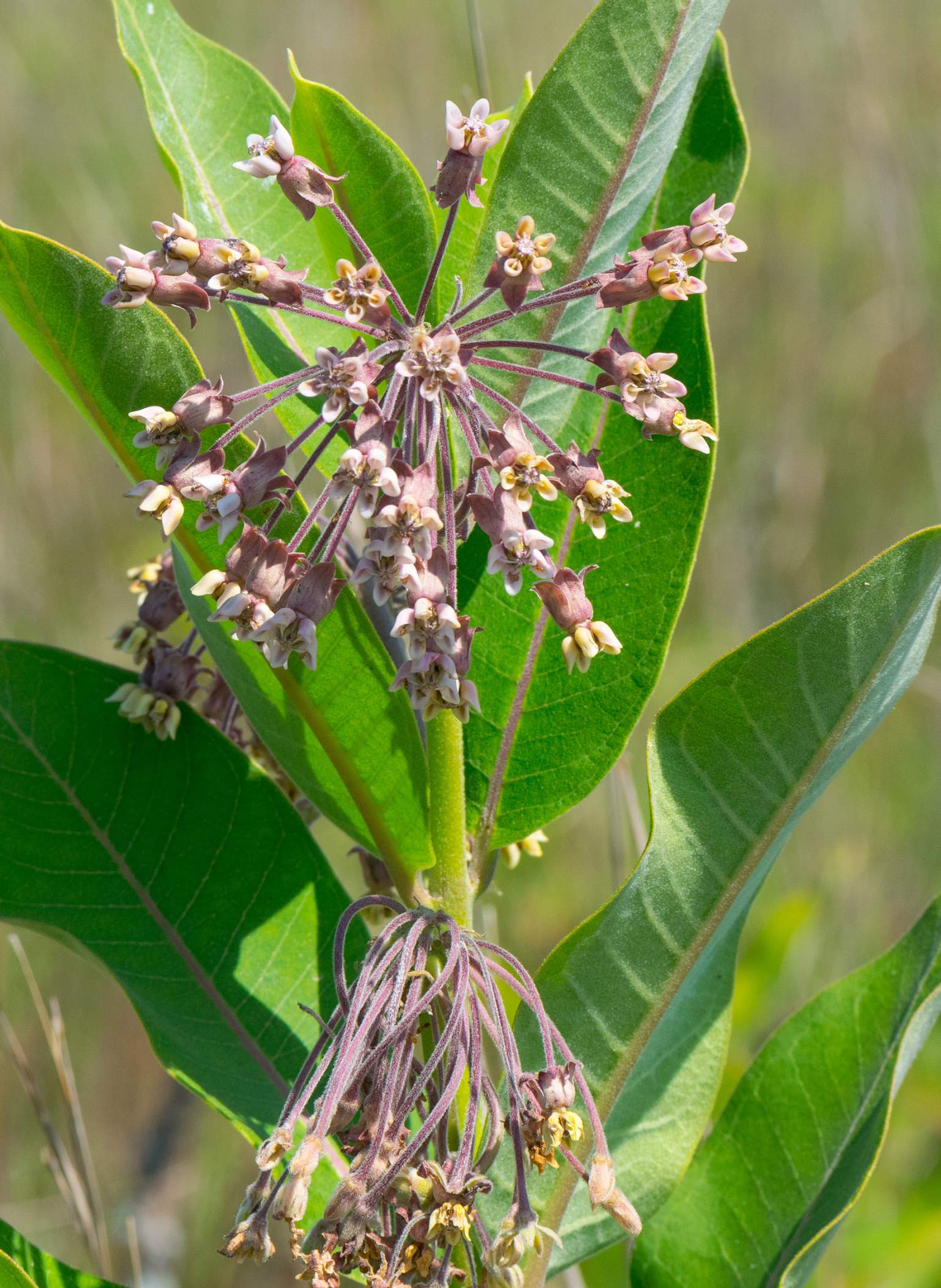 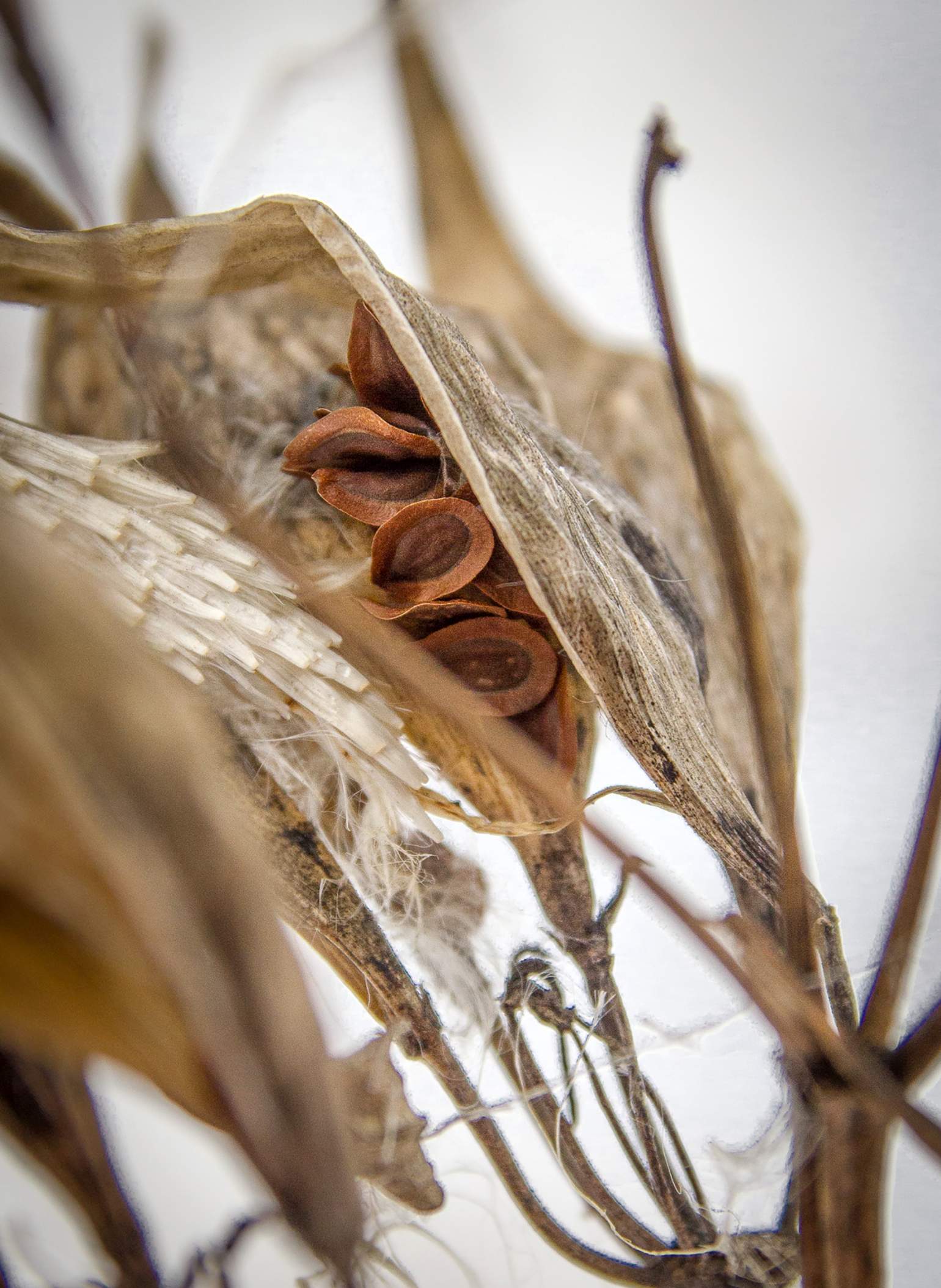 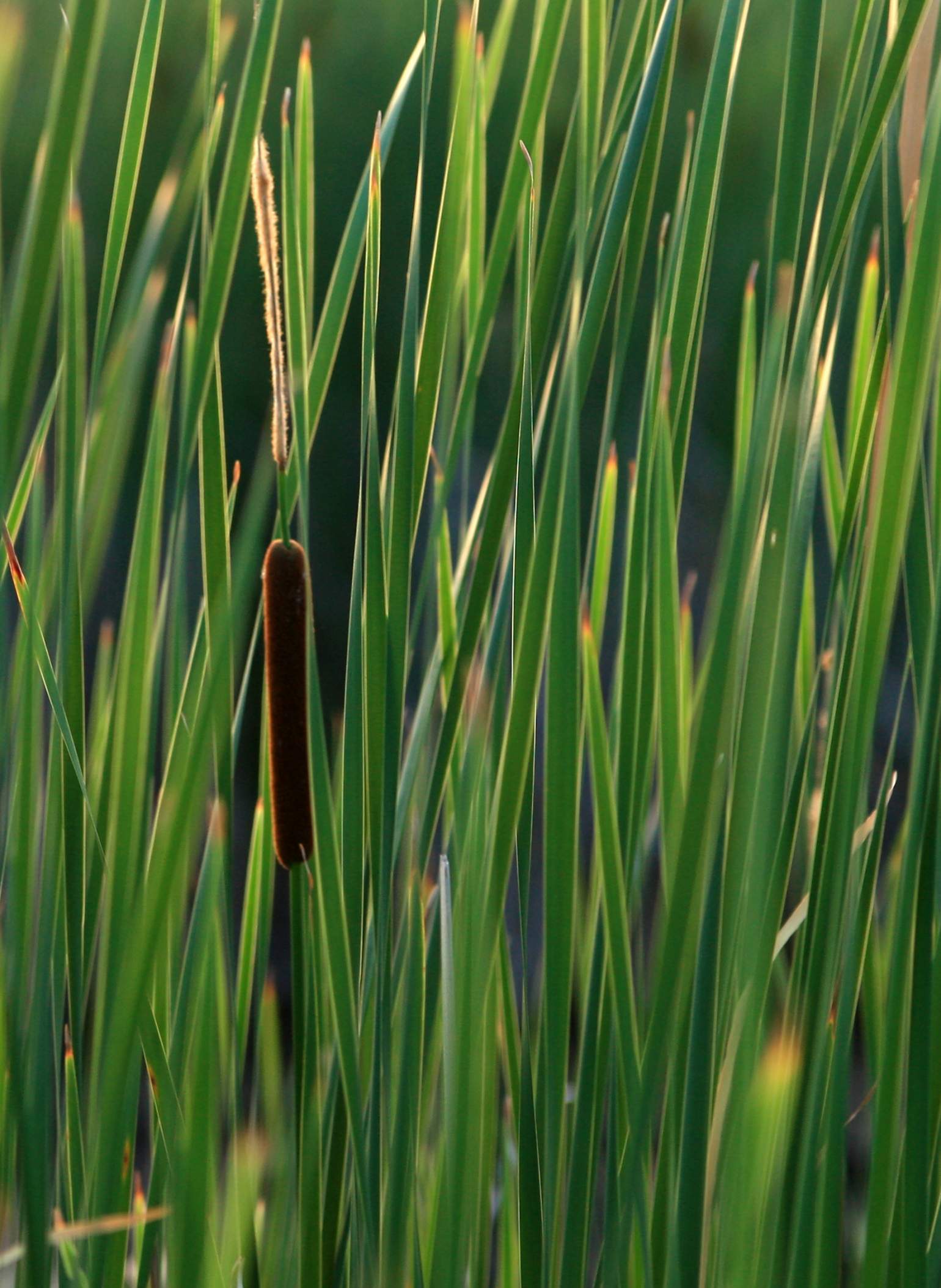 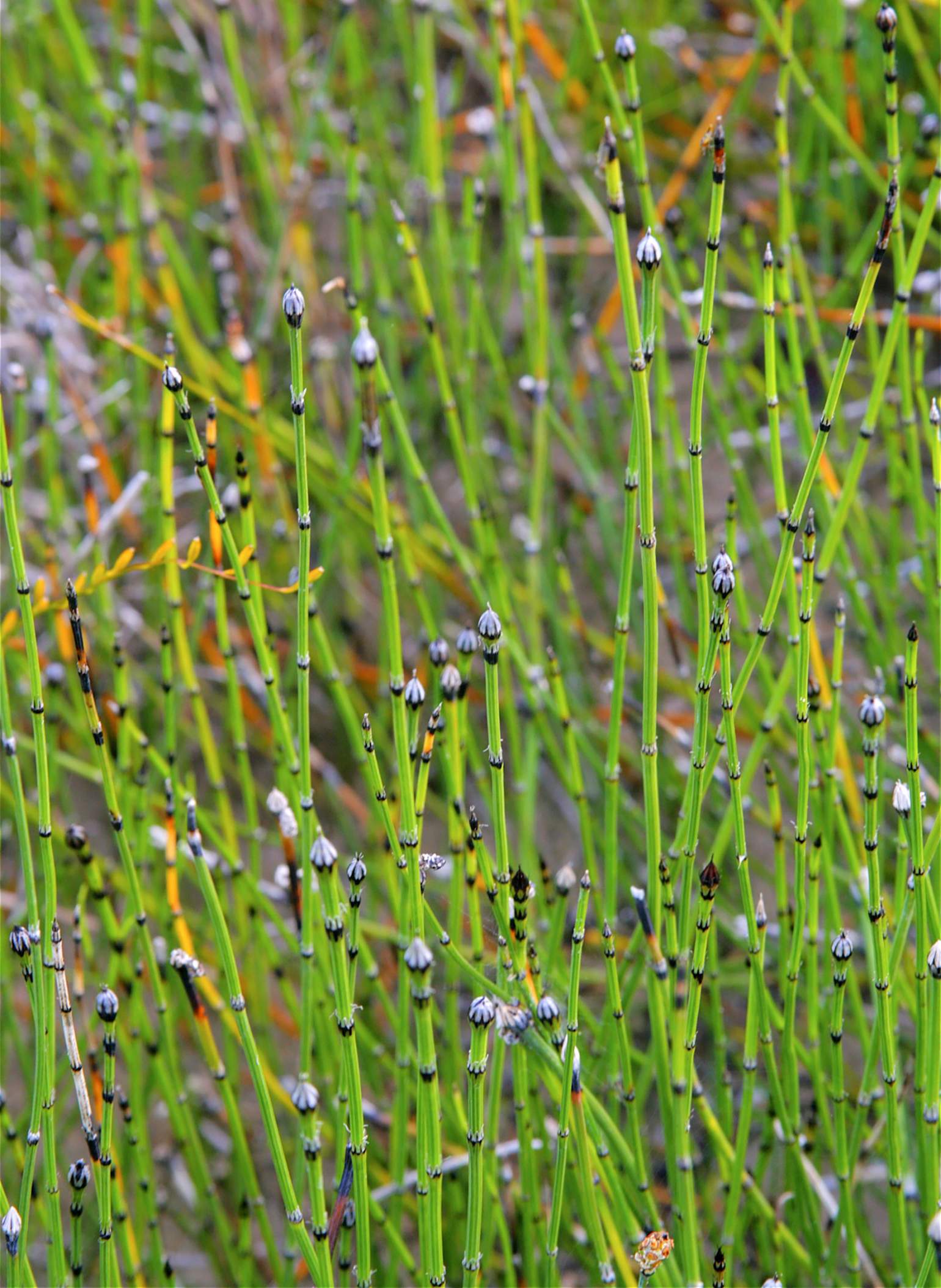 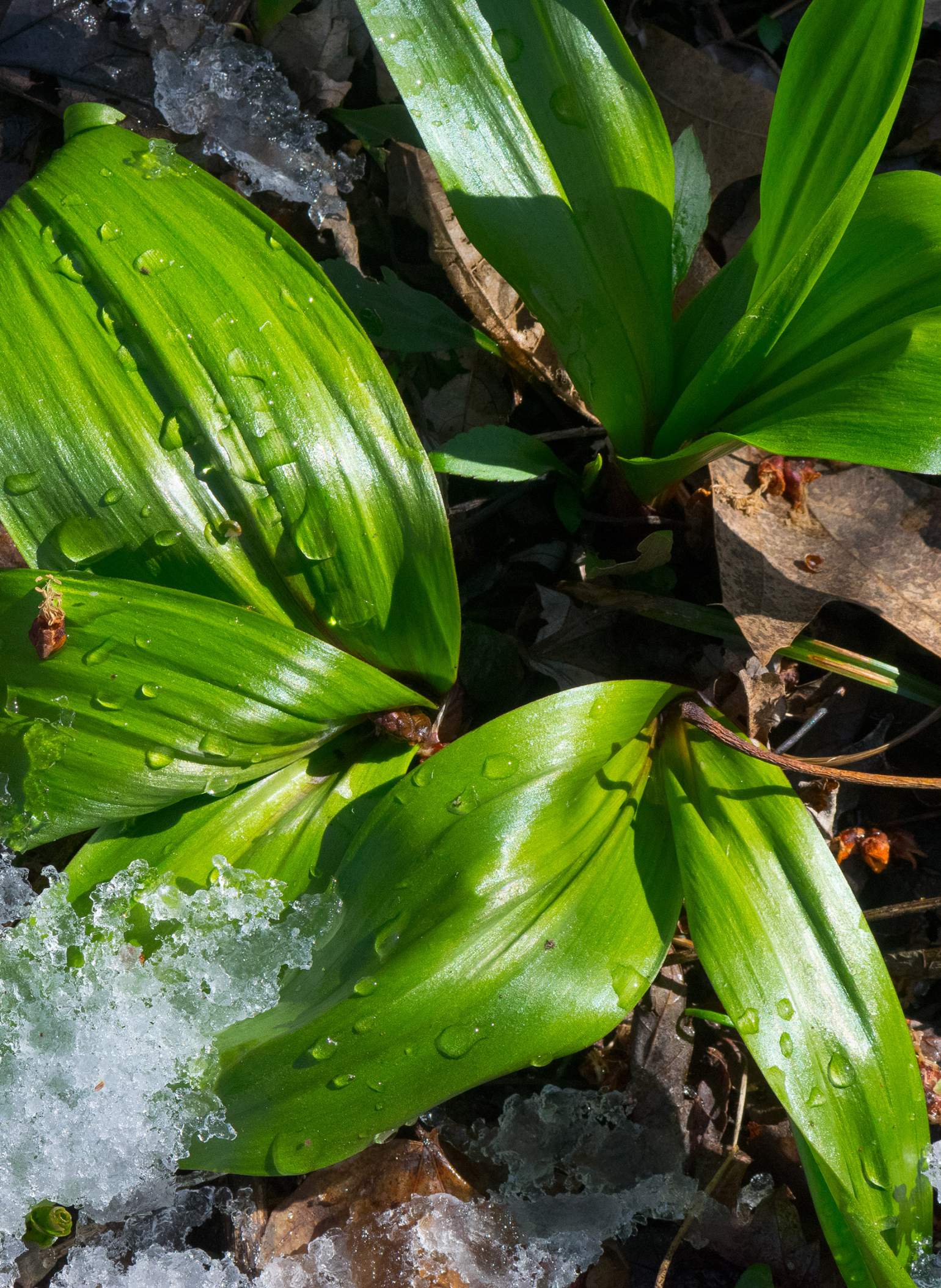 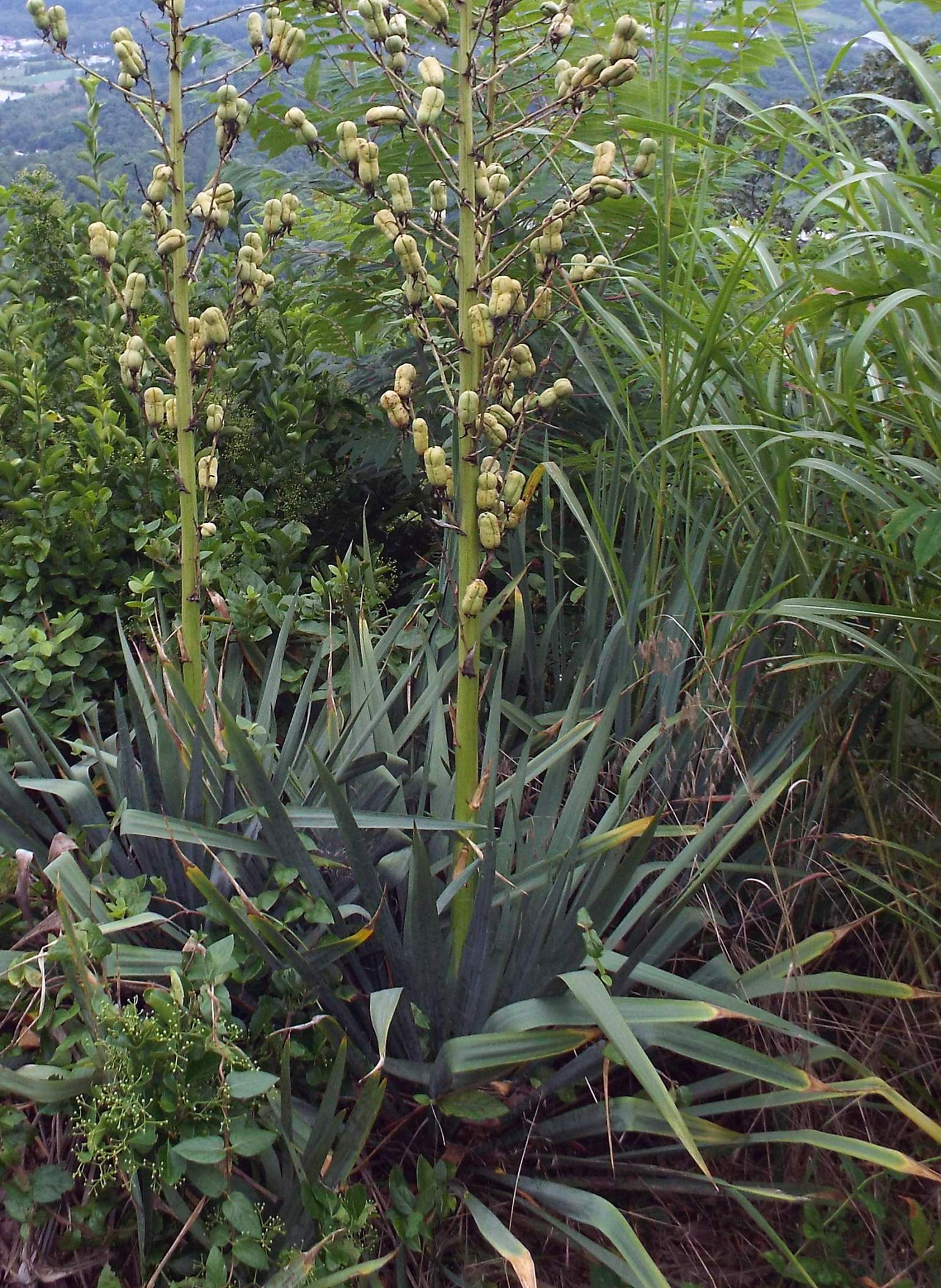 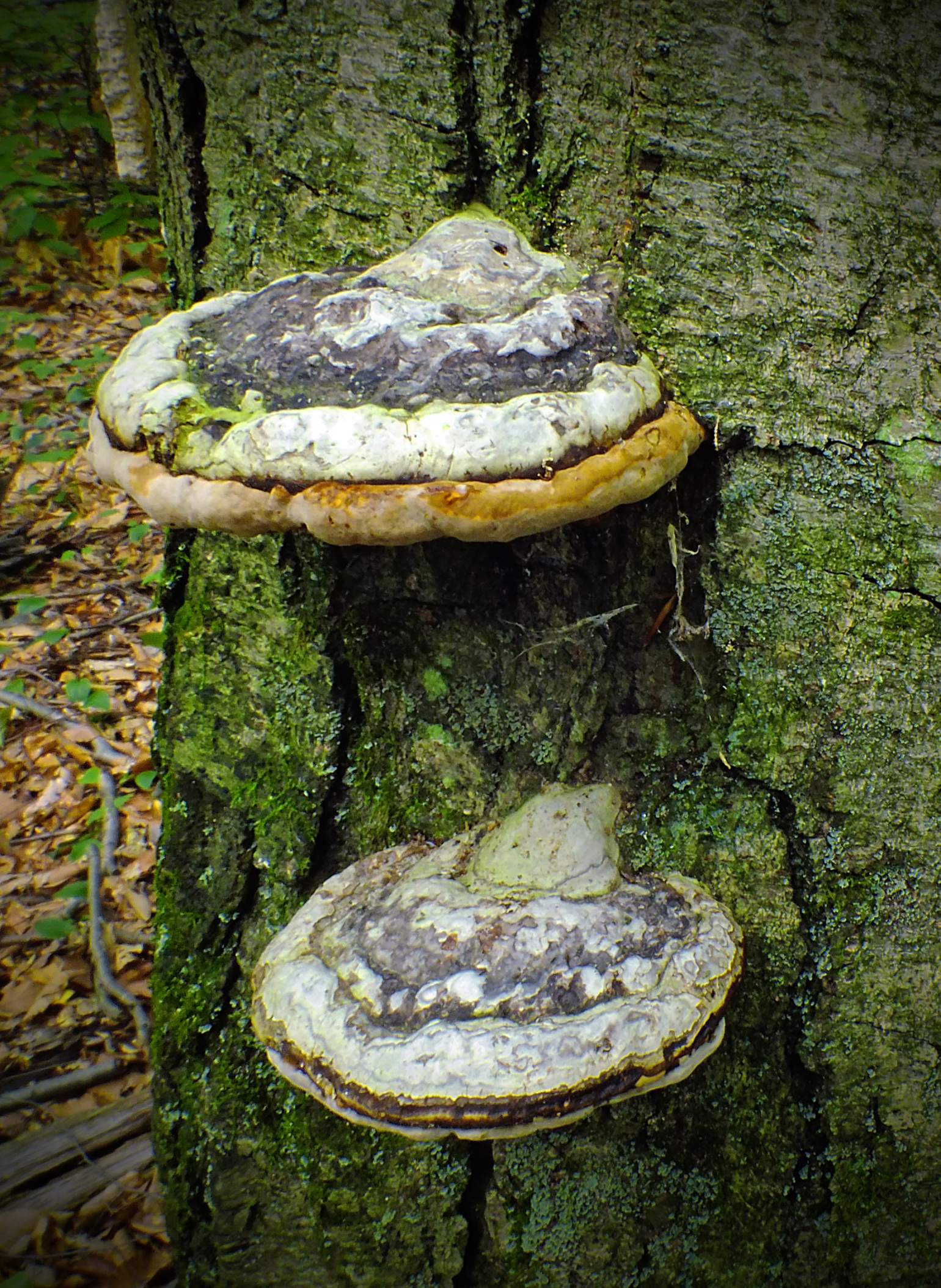 Tinder fungus (or hoof fungus)
Nicholas A. Tonelli (CC BY 2.0) 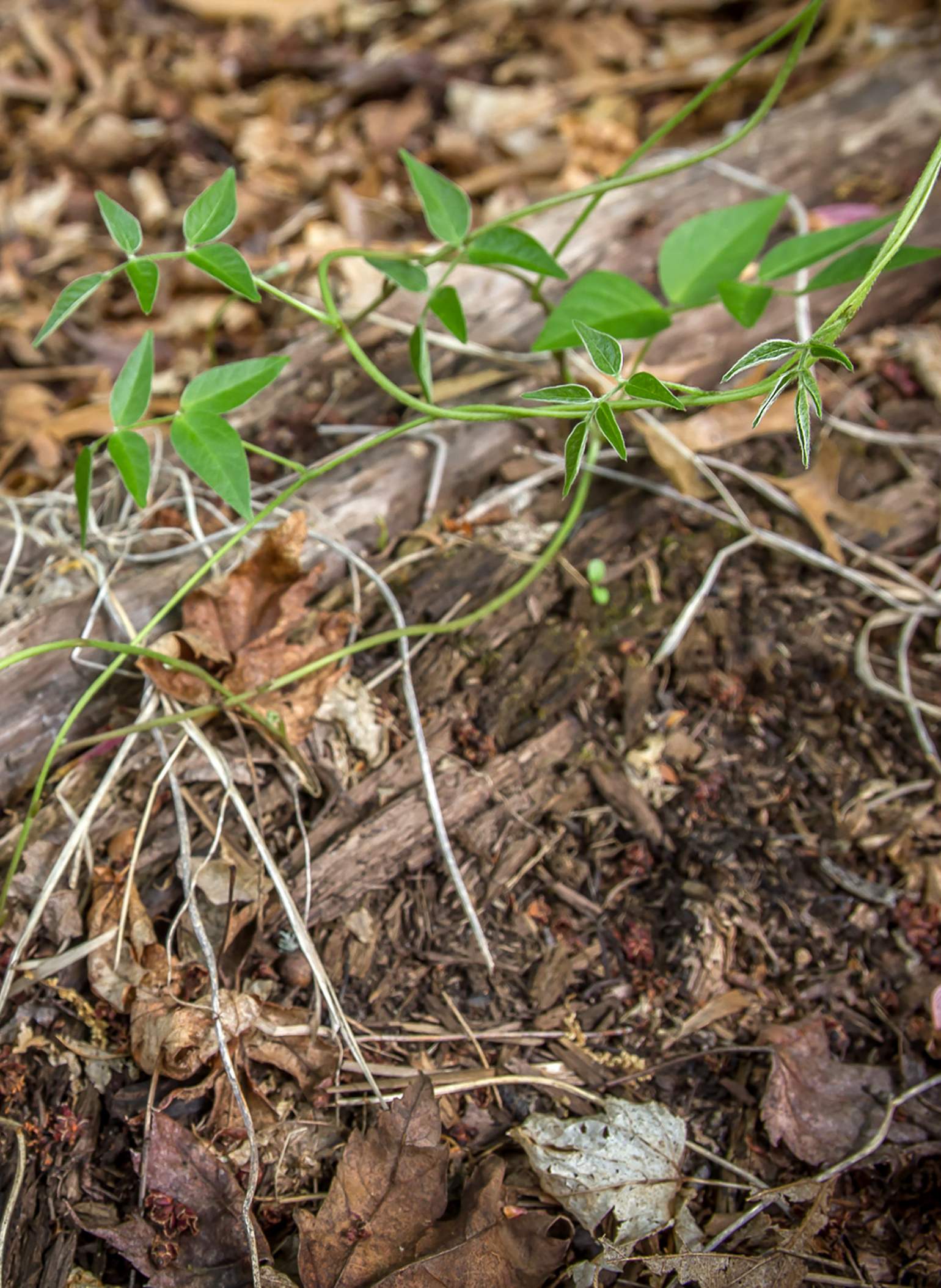 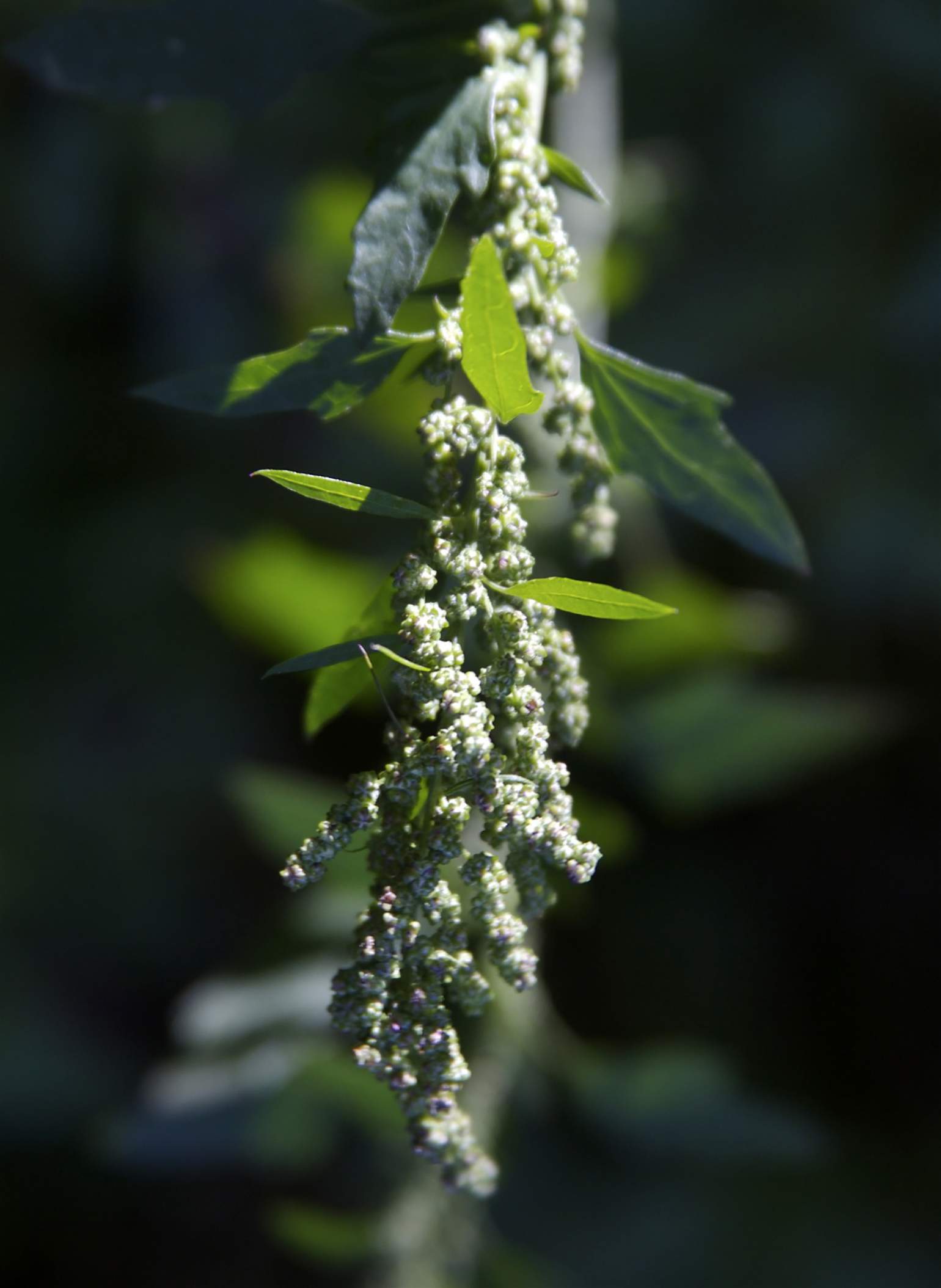 A springtime favorite of many foragers is the ramp, or wild leek (Allium tricoccum). Ramps green up on forest floors around the same time that morel mushrooms pop up, usually in May around much of Wisconsin. They're a member of the onion family, similar in taste and texture to green onions, and can be eaten raw, cooked or pickled. Because their bright green foliage is easily identifiable in the spring, that's when they're most easily harvested. The leaves wilt and drop in the summer, making ramps much more difficult to locate and harvest.

Eagan noted that ramps, like many forage species, will not come back in a location if a whole population is harvested: "Like many wild foods … harvest selectively so you don’t clear the population," he said.

A plant many Wisconsinites might be surprised to learn grows in the state is the yucca, or at least one species: the weak-leaf yucca (Yucca flaccida). While non-native in Wisconsin, this yucca is native to North America and is found in a half dozen counties in southern Wisconsin. The plant grows best in well-drained sandy soils, and its leaves make useful fiber.

It's the yucca's stems, however, that stand out, said Eagan, because they're very useful for starting fires using the bow drill method. In this process, the hard, woody stem can be drilled or hand-spun into a board, called a spindle. The friction produces heat and a fine powder, which can soon combust with more friction.

Another useful forest species for kindling fires is the only fungus on this list: the tinder, or hoof, fungus (Fomes fomentarius). These mushrooms grow on several species of dead or dying trees, including beech, birch and aspen, and they're easily identifiable: they look like horse hooves growing from the side of a tree's trunk.

The mushrooms will pop off their arboreal habitat fairly easily, explained Eagan, and make another handy fuel. Hoof fungus isn't necessarily useful for starting an initial fire, but once lit, a single mushroom will burn very slowly and can be used as a punk for starting other fires later.

As its name indicates, one edible part of a groundnut (Apios americana) is, well, underground. Specifically, Eagan pointed to shallow, tuber-like growths on the roots of the species, which grows in most of Wisconsin, and is also called a hopniss or American potato bean. Each plant can produce many tubers, which can be cooked much like potatoes. Eagan said these tubers are similar to potatoes in their mild flavor, but pack much higher protein content. They're so nutritious that they're even cultivated in some parts of the world, including Japan. The vining plant also produces edible beans.

One of the most useful wild plants in Wisconsin can be found in the backyard. Lambsquarters (Chenopodium album) is a very common weed in Wisconsin that many gardeners are familiar with by way of pulling and disposing of it.

However, Eagan suggests making use of the weeds as food. The edible leaves can be eaten raw or cooked, he said, and are exceptionally nutritious, packing a high amount of essential vitamins. Seeds from the prolific plant are also edible and nutritious, he said, and can be cooked into a porridge.

"Most wild greens are high in vitamins A and D and many with C [and] K," Eagan said. "So they're vitamin rich, many wild edibles, [and] they can make a good addition to a diet."

Tips To Start Foraging For Wild Edibles
Dame's Rocket, An Invasive Confused For Phlox, Is A Common Sight In Wisconsin
Picky, Tricky Blueberries Can Flourish In Containers
Globetrotting Mosquitoes May Stow Away In Unexpected Places
Fall Is The Time To Start Planting A Native Prairie Plot
Blueberry Maggot Fly Poised To Expand In Wisconsin