How Aging, Race And Population Loss Play Out In Seven Counties On The River
Julie Grace
WisContext
Aug. 21, 2018 | 1 p.m. 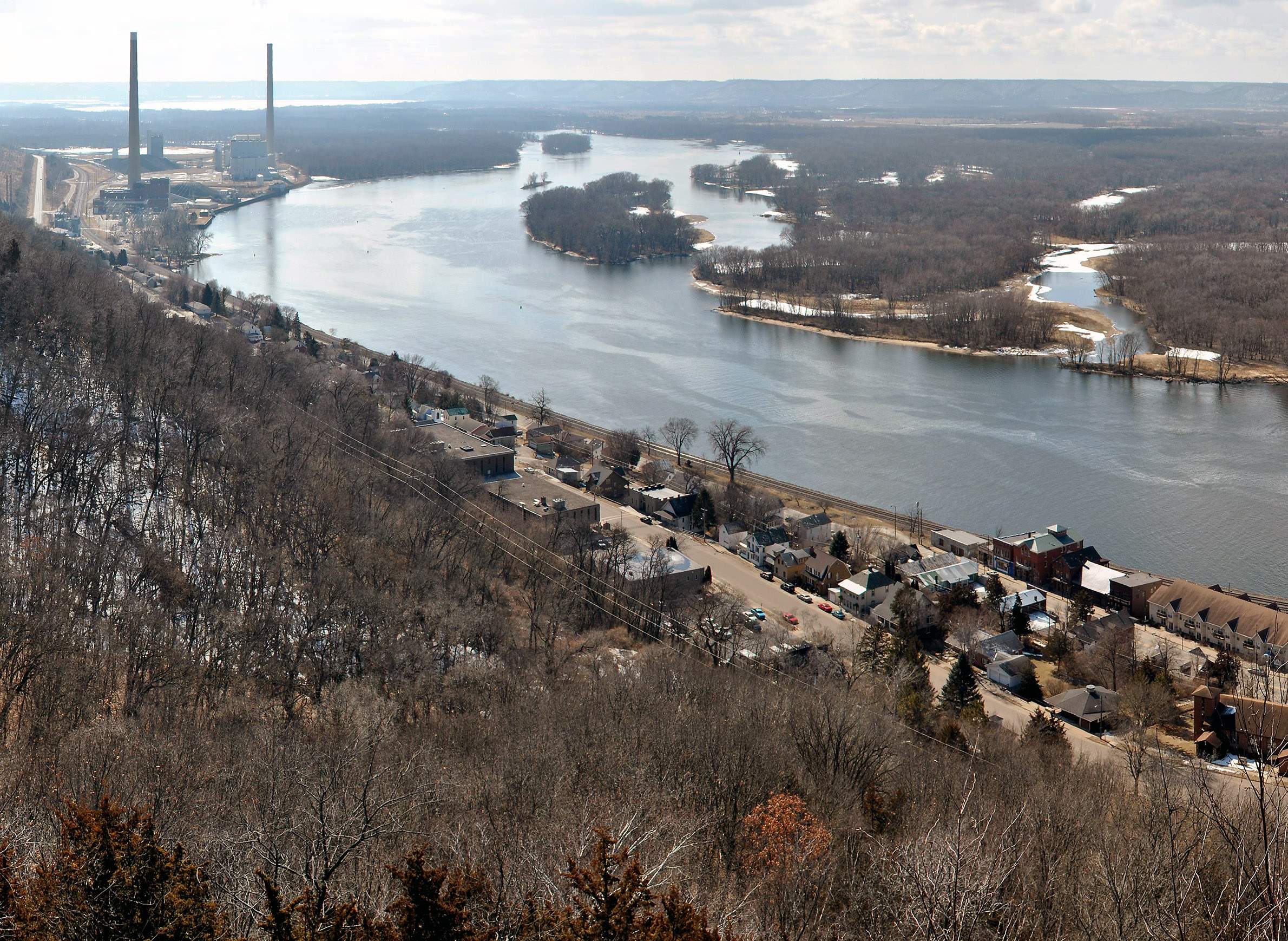 Pepin, Buffalo, Trempealeau, La Crosse, Vernon, Crawford and Grant — these seven counties running north-to-south along the Mississippi River comprise around half of Wisconsin's western border. The region is home to just 4.6 percent of the state's population and is predominantly rural, with only one larger city: La Crosse.

Excepting La Crosse, these counties are among the 22 that "flipped" in the 2016 presidential election, shifting from majorities voting for Barack Obama in 2012 to Donald Trump four years later. They are also part of a larger regional trend, in which other counties along the Mississippi River in Minnesota, Iowa and Illinois also swung red. The shifts in these counties helped swing Wisconsin's electoral vote support to a Republican candidate for president for the first time since 1984.

Alongside their electoral similarities, these counties also stack up in terms of demographics and economic measures. Overall, they have predominantly white populations that are aging, lower than average unemployment rates, lower than average labor participation rates, lower levels of post-secondary educational attainment and higher rates of poverty, compared to the state as a whole.

As detailed in a state demographic profile by the University of Wisconsin Applied Population Lab, each of the seven counties' populations are at least 90 percent white, with five (excepting La Crosse and Trempealeau) closer to the 95-96 percent range. These percentages differ considerably from the state’s white (but not Hispanic or Latino) population, which is at 82 percent overall.

The region is also getting older, according to a 2013 UW Applied Population Lab report. In fact, three of the seven counties' populations are projected to decrease by 2040 – Pepin by 7.8 percent, Buffalo by 4.3 percent and Crawford by 0.5 percent, even as the number of people in state as a whole is expected to grow. 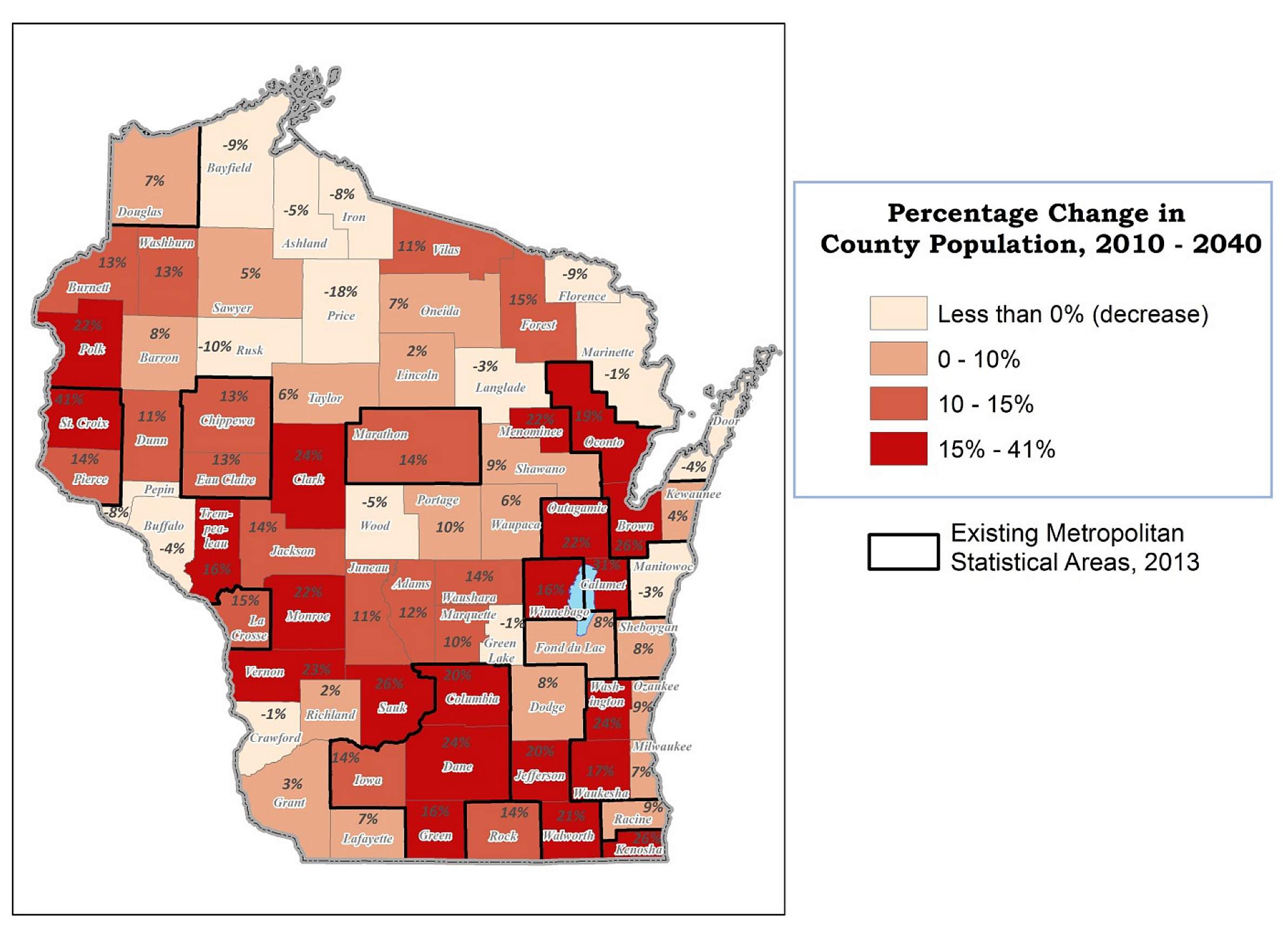 Given these types of increasingly visible demographic differences between rural, suburban and urban areas – in Wisconsin and across the United States – many observers have been attempting to unpack their specific causes and consequences.

Understanding any region's demographics starts with asking questions: Who lives here? How does an area compare to the rest of the state? How are its residents struggling? And what metrics can be used to tell their story?

Here's a brief look at seven Wisconsin counties that reflect the broader national conversation about the condition of rural America.

As one of the smallest counties in Wisconsin by area and the least-populated in the western part of the state, Pepin County has recorded population losses every year since 2010. In fact, the Applied Population Lab projected that it reached its peak population in 2015. Pepin has the highest percentage of residents with no more than a high school degree in the Mississippi River region at 42.3 percent. That's 10.6 points higher than the statewide percentage of people with no more than a high school degree. Following the 2016 election, Pepin County drew national media attention due to its flip from blue to red, with this scrutiny focusing on demographic trends, mostly told anecdotally by residents, that might have led to that reversal.

What most striking in Buffalo County is its low poverty rates compared to the rest of the region. In fact, it is the only county among the seven that has a consistently lower poverty rate than the state average in every year since 2009, when the U.S. Census started collecting that information. However, Buffalo County's population is projected to age somewhat dramatically in the next couple of decades — the only age groups projected to grow by 2040 are: 65-69, 70-74, 75-79, 80-84, 85-89, and 90 and older.

The only county in the region with a city with more than 50,000 residents and is therefore defined as a metropolitan statistical area, La Crosse is an outlier compared to the other six counties. Its population has consistently increased since 1981, it is somewhat more racially diverse, it’s labor force participation rates are higher and it has higher education levels – in fact, in each metric, the county’s numbers exceed the state average.

Vernon County's poverty rates are the highest in the seven-county area. In 2016, a staggering 16.3 percent of its population was living in poverty — compared to 12.7 percent statewide — and this number has been growing since 2009. Additionally, only 67.9 percent of its population 16 years or older were participating in the workforce, and its percentage of those with less than a ninth grade education – 6.6 percent – is more than double that of the state average.

Crawford County's population has remained largely stagnant since 1980, although there have been declines in recent years that are projected to continue. The county's unemployment rates have also been the highest in the region since 2012, while its labor force participation and educational attainment rates are among the lowest.

Located in the southwest corner of the state, Grant County has had slight population growth in the 2010s. However, it also has some of the highest poverty rates in the region – over 15 percent for every year since 2009.

The demographic measures of these seven Wisconsin counties along the Mississippi River aren't unlike those of various other rural areas across the country. On a national level, a May 2018 report issued by the Pew Research Center detailed stark distinctions between urban and rural America, examining the latter's struggles with poverty, shrinking populations, labor force participation and education, among other issues.