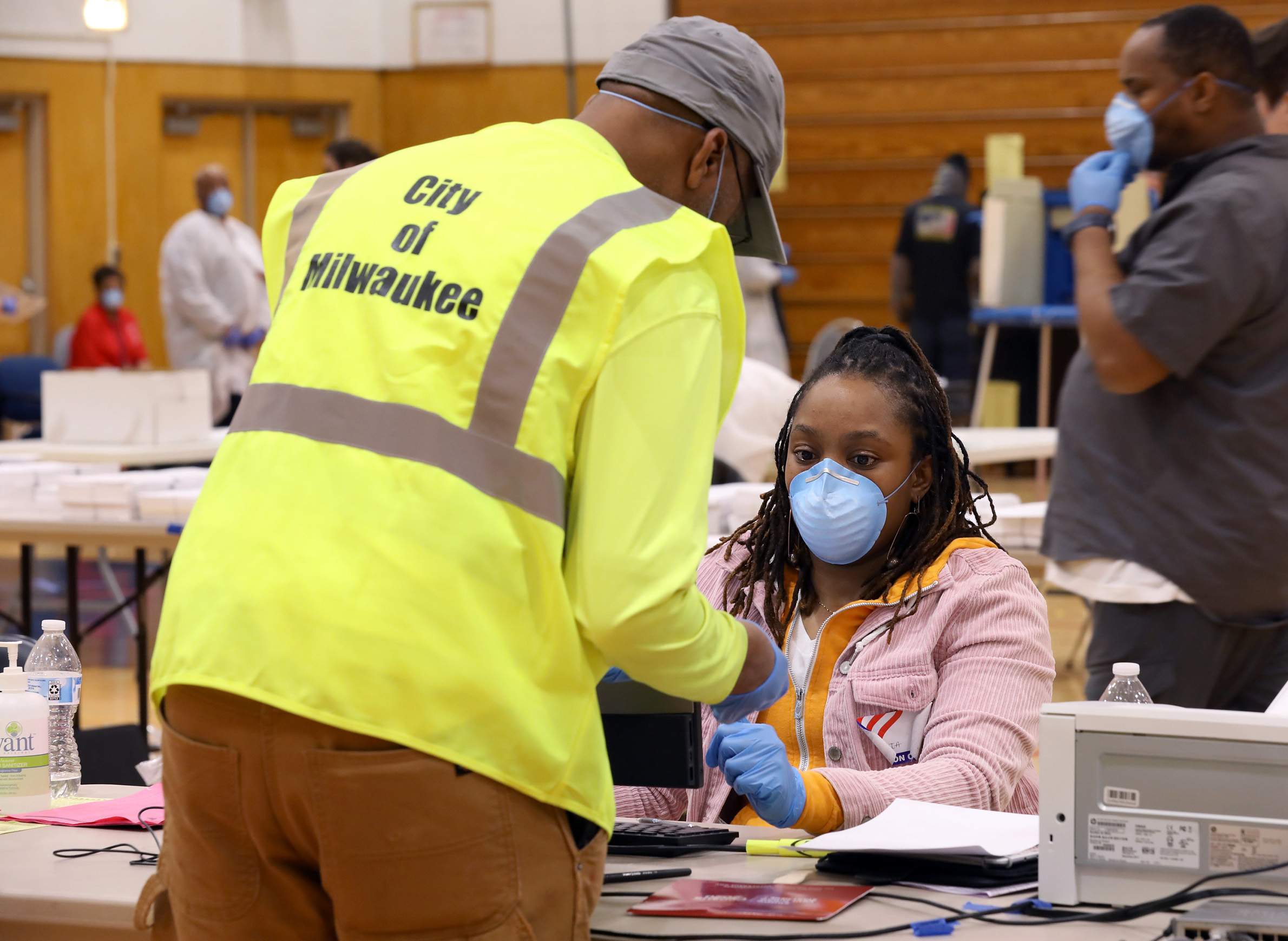 Coburn Dukehart/Wisconsin Watch
A poll worker wearing protective gear assists a city of Milwaukee employee with check-in at Marshall High School in Milwaukee on April 7, 2020. A study from the Brennan Center for Justice estimates that consolidating the city's polling sites down to five from 182, and voter fears of contracting the coronavirus, depressed voting by 9.9 percentage points among non-Black voters and 15.9 percentage points among Black voters.

Significant numbers of Milwaukee voters were dissuaded from voting on April 7 by the sharp reduction in polling places and the threat of the COVID-19 pandemic — with the biggest effects seen among Black voters, according to a study from the Brennan Center for Justice.

Overall, turnout in the city for the spring 2020 election — which determined a hotly contested Wisconsin Supreme Court race and the state's preference for a Democratic nominee for president — was 32%, according to the Milwaukee Election Commission.

The Brennan Center study raises concerns about disenfranchisement in November, especially among Black residents, as voters choose the president and members of Congress and the Wisconsin Legislature. And it raises fresh doubt about how well states like Wisconsin, which does not have a tradition of widespread absentee balloting, will ensure that all residents can vote in November without exposing themselves to a deadly disease.

The study examined the impact of the city of Milwaukee's decision to close all but five of its usual polling sites on April 7 due to lack of available poll workers and the effect of conducting a statewide election during a pandemic.

"It is a big effect, and it should make administrators perk up and realize we need to make access to the ballot easier, not harder, this fall," said researcher Kevin Morris, who conducted the study with fellow researcher Peter Miller for the Brennan Center, a New York University Law School-based institute that advocates for changes to improve democracy. 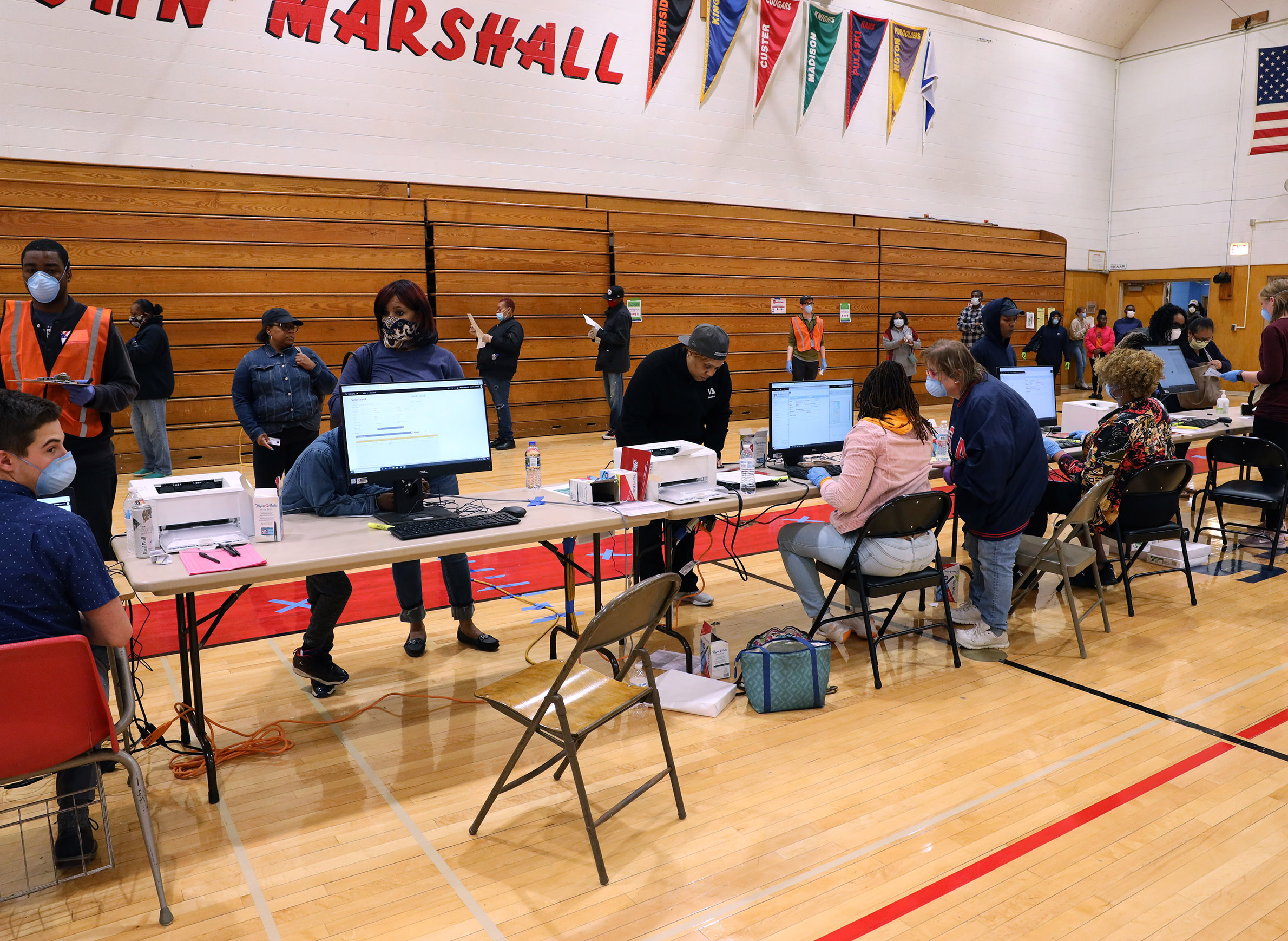 Among those who stayed away from the polls on April 7 was Paula Durrell, a 64-year-old retired breast cancer survivor. The Milwaukee resident told the Milwaukee Neighborhood News Service that the election forced her to choose between her right to vote and protecting her health. She chose the latter.

As an African American resident, "Voting is very important to me," Durell said. "But it's not number one right now under the conditions that we're living in."

The study compared voters in Milwaukee with those in the rest of Milwaukee County, in Racine County and in the conservative-leaning “WOW” counties of Washington, Ozaukee and Waukesha. The study "genetically" matched each city voter with two similar voters in adjacent areas by party affiliation, gender, household income, education and race/ethnicity.

At the time of the election, those other counties were experiencing COVID-19 infection rates far below the rate of 14 per 10,000 residents in Milwaukee County — the hot spot of infection in Wisconsin. And none of them consolidated polling places as aggressively as did the city of Milwaukee.

Previous studies have shown that closing or moving polling places farther away can depress voter turnout. The report credits fears over the pandemic with even further suppressing the vote on April 7.

Milwaukee Election Commission Executive Director Neil Albrecht said the city drastically consolidated polling places after the usual election staff of 2,200 was cut to 300 because of the "unparalleled" level of fear of the pandemic. Albrecht blamed the Legislature for pushing ahead with the election, which he said "put the lives of Milwaukee residents at risk."

Officials in Milwaukee and around Wisconsin took numerous measures to improve safety at the polls, including using plexiglass barriers, face masks and shields, allowing voters to stay in their vehicles to vote, enforcing social distancing and offering plenty of hand sanitizer.

How the election affected public health is unclear.

The Wisconsin Department of Health Services found 71 residents of the state got COVID-19 after voting or working at the polls, the Wisconsin State Journal reported in May. But those people could have been exposed in other ways, health officials said.

The results of outside studies on the issue are mixed. A study by researchers at the University of Wisconsin-Oshkosh and Ball State University found "a statistically and economically significant association between in-person voting and the spread of COVID-19 two to three weeks after the election." But a University of Hong Kong and Stanford University study of confirmed COVID-19 cases and hospitalizations found "no detectable surge" in transmission from the election.

Both studies were released before being peer-reviewed. 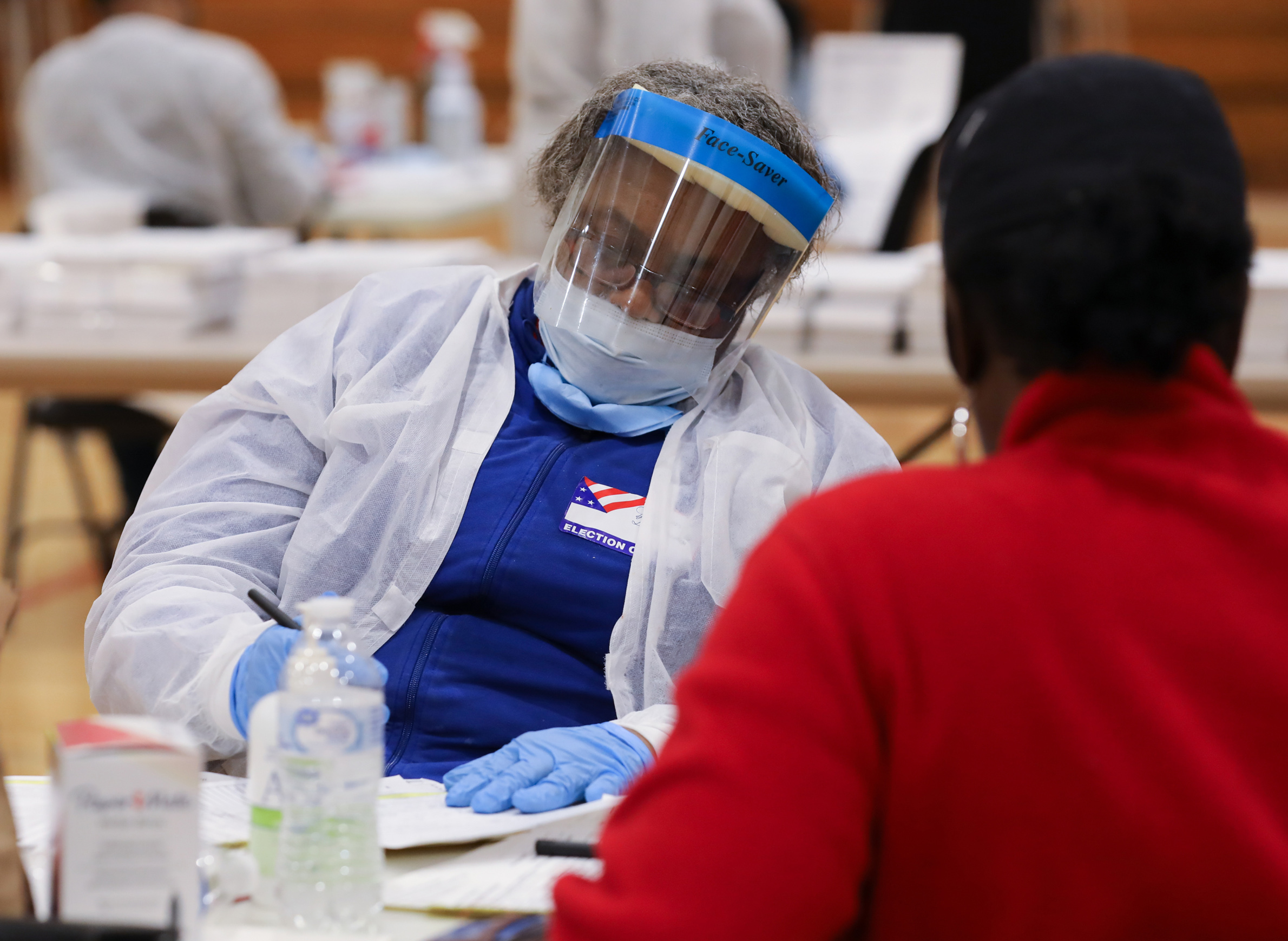 The Brennan Center researchers said their study raises concerns about racial representation in the November election as voting shifts more to absentee balloting, which is less often used by racial minorities — who studies show are more likely to have their absentee ballots rejected.

A record-smashing 1.1 million-plus absentee ballots were cast statewide on April 7 — four times the amount requested in the previous spring presidential primary in 2016. But that shift did not offset the drop in in-person voting, the researchers found.

Wisconsin Watch found that some voters warily went to the polls after requesting absentee ballots that never came — or decided reluctantly to stay home.

Albrecht said he expects Milwaukee will open most if not all regular voting sites for the Aug. 11 partisan primary and the Nov. 3 general election. Anticipating a large demand for vote by mail, the Wisconsin Elections Commission also plans to send absentee ballot applications to 2.7 million registered voters ahead of the November election.

"Voters will not seamlessly transition to vote by mail," the Brennan Center researchers cautioned, "and polling place closures this fall will come at the expense of turnout — particularly the turnout of Black Americans."

The nonprofit Wisconsin Watch collaborates with WPR, PBS Wisconsin, other news media and the UW-Madison School of Journalism and Mass Communication. All works created, published, posted or disseminated by Wisconsin Watch do not necessarily reflect the views or opinions of UW-Madison or any of its affiliates.

A Trio Of Nurses Share The 'Surreal' Ordeal Of Fighting For Lives In A COVID-19 ICU
Most COVID-19 Patients In Wisconsin Have Recovered, But What Does That Mean?
Contact Tracers In Wisconsin Are Battling COVID-19 — And Misinformation
Thousands Of Voters Are Caught In A Legal Battle Over Wisconsin's Election Rolls
Clues To Wisconsin's Coronavirus Present Echo From Its Pandemic Past