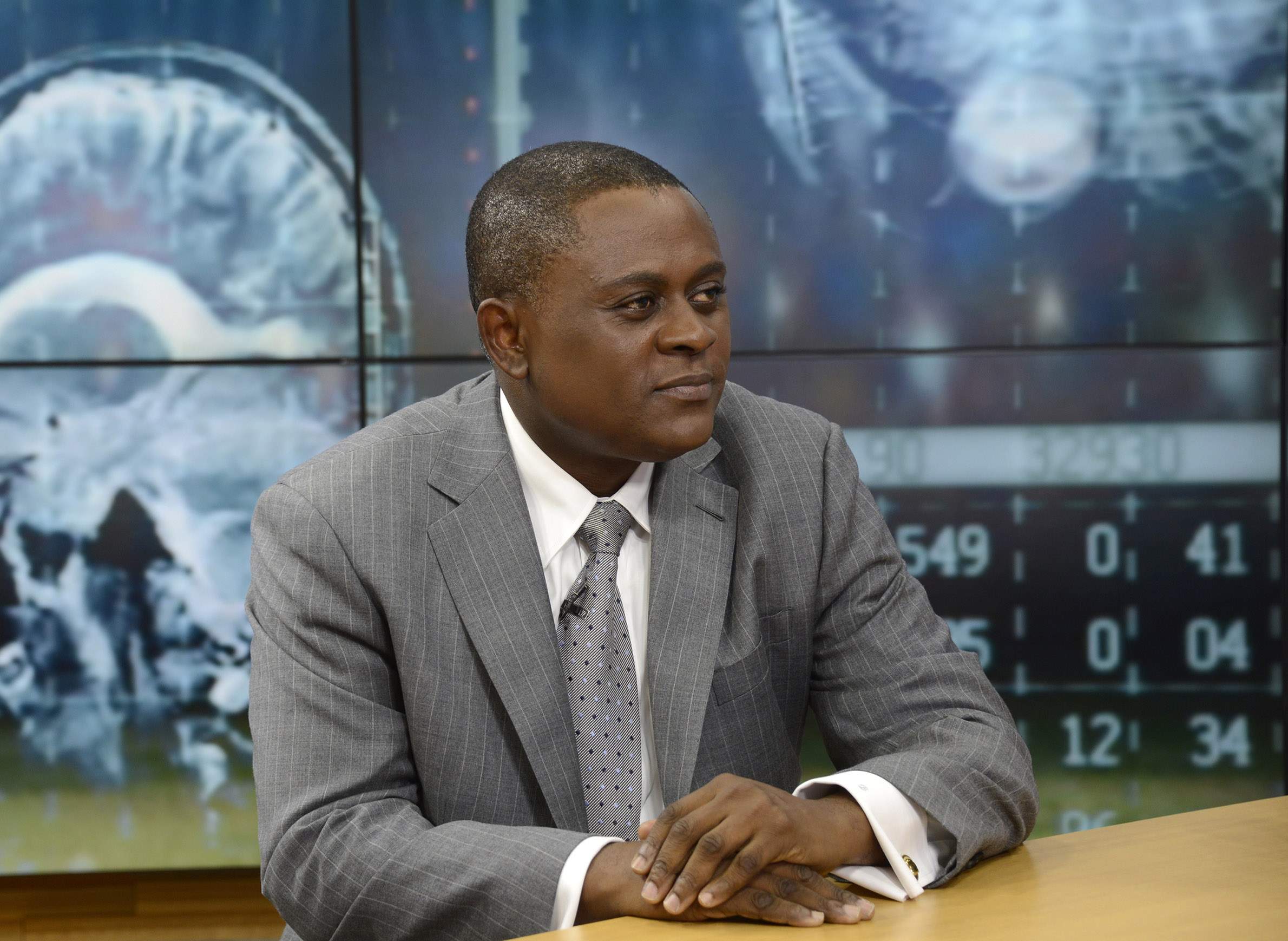 The subject of the 2015 movie Concussion, Dr. Bennet Omalu's discovery of a degenerative brain disease in former Pittsburgh Steelers center Mike Webster and others has spurred a national debate about the safety of high contact sports including football, ice hockey, mixed martial arts, boxing, wrestling, rugby, lacrosse and soccer.

In 2002, Omalu identified chronic traumatic encephalopathy, a crippling neurodegenerative disease found in football players, including Webster. He went from Hall of Fame inductee and Super Bowl champion to homeless. Webster's erratic behavior included tasing himself into unconsciousness in order to sleep.

Omalu likens the American obsession with football to a religion. In that regard, he might be considered a heretic: Omalu has equated allowing children to play football to child abuse and warns that the NFL is doomed unless it starts reducing harmful blows to the head.

Excerpts of a Wisconsin Center for Investigative Journalism interview with Omalu follow:

Several players on the University of Wisconsin football team have described not having had concussions in years, but having their "bell rung" many times. They're quoted as feeling dazed and slightly disoriented. Are these concussions? Are these hits dangerous?

Bell ringing is a concussion. And you don't need to suffer a concussion to suffer brain damage. The issue here is repeated blows to the head, with or without concussion. Now these kids are in college, they are above the age of 18, so adults are free to do whatever they want to do. Adults are free to choose to play football. My focus is on children. Now … the players who are making that judgement on such a serious issue, in 20 years, they will not be on the football field, they will be weeping ...

I know someone personally who played in the NFL. Several years ago I called him and he told me, 'Hey this doesn't affect everybody, I play safe!' Now he can't even keep a job, every job he gets, he gets fired because his mind is not just right, he doesn't remember things. And he is calling me now asking me how I can help him. How am I going to help you? I was helping you several years ago when I advised you to stop playing ...

If you're above 18 and you want to drink alcohol, smoke marijuana or play a dangerous sport, that's your discretion. There is nothing anybody can do about it ... When young adults want to play football and are damaging their brains; good for you. There is nothing I can do about it. My focus is on children under the age of consent. They should not be engaging in dangerous activities that could be damaging their brains.

I mean it's like asking me how does alcohol cause brain damage. It is something very basic and elementary in science. The human brain is 60 to 80 percent water. The human brain floats freely inside your skull, and the human brain has no reasonable capacity to cure itself, so when you have a blow to your head, there is no regeneration. In the game of football, some of these blows to the head are equivalent to a car crash at 13 miles per hour.

The human brain does not have a capacity to sustain such violence, so each and every impact you have causes microscopic injuries in your brain. Because the brain does not have an unlimited reserve to cure itself, at some point, it resets itself and becomes self destructive. And it’s final, there is no cure, and it is progressive. So subconcussive blows are accumulated upon each other. There is no safe blow to the human head. Every impact to your head can be dangerous. That is why you need to protect your head from all types of blunt force trauma. A helmet does not make a difference.

What kind of an issue is the issue of concussion?

We are animals of habit, animals of culture and tradition. Many of these kids have been raised in cultures where football is elevated to a level of religion. So their thinking of football is not objective, it is emotional, it's a habit. That's called conformational thinking ...

Majority of football players, high school, college, NFL are black. In the NFL for instance, blacks make up about 10 to 12 percent of the total population but make up about 75 percent of professional football players. So this is becoming a civil rights issue. It is a certain segment of the population that is more likely to be underprivileged. They are being guided by a certain cultural mindset.

There is a false narrative being presented to poor black kids in the South, that is not true, that football almost guarantees they'll move up the economic ladder. That is a lie. That is a complete lie. Who is more likely to live in a million dollar home when they are they are 60 years old: a dentist, a physician, a lawyer or a professional football player? Poor black kids believe that playing football will buy them the million dollar home when they are 60 years old. We are feeding this false narrative to children …

The NCAA and U.S. Department of Defense are conducting a $30 million concussion study. Would you trust medical research coming from the NCAA directly?

The NCAA is not in the business to do medical research. That'’s not what they do. The medical research they do, I wouldn't trust it. So when the NFL was involved with medical research, the NFL's conclusion was that football did not cause brain damage …

When these doctors make public statements you see, their statement is normally that they can make football safer. Let me ask you, can you make fire safer? I suppose you could make it safer by putting it in a lighter. A lighter is safer than a match stick right? But would you give your 5-year-old child a lighter to play with?

What is the long term outlook on the sport, in your view?

I have faith in my science and science in my faith. Science and faith speak the truth, the only truth. There is only one truth, truth does not have a side or different perspectives, there's only one truth. And if you choose to ignore that one truth and come up with your own alternative truth, you can only ever get to darkness, you can never get to the light of truth.

Someone like me who speaks the truth about football is actually a better asset to football than a doctor who denies that football does not cause brain damage, in the long term.

Luke Schaetzel, a recent University of Wisconsin-Madison journalism graduate, is a freelance reporter based in Madison. The nonprofit Wisconsin Center for Investigative Journalism collaborates with Wisconsin Public Radio, Wisconsin Public Television, other news media and the UW-Madison School of Journalism and Mass Communication. All works created, published, posted or disseminated by the Center do not necessarily reflect the views or opinions of UW-Madison or any of its affiliates. The Center's collaborations with journalism students are funded in part by the Ira and Ineva Reilly Baldwin Wisconsin Idea Endowment at UW-Madison.