The Hidden Costs And Value Of Wisconsin's Search And Rescue Apparatus 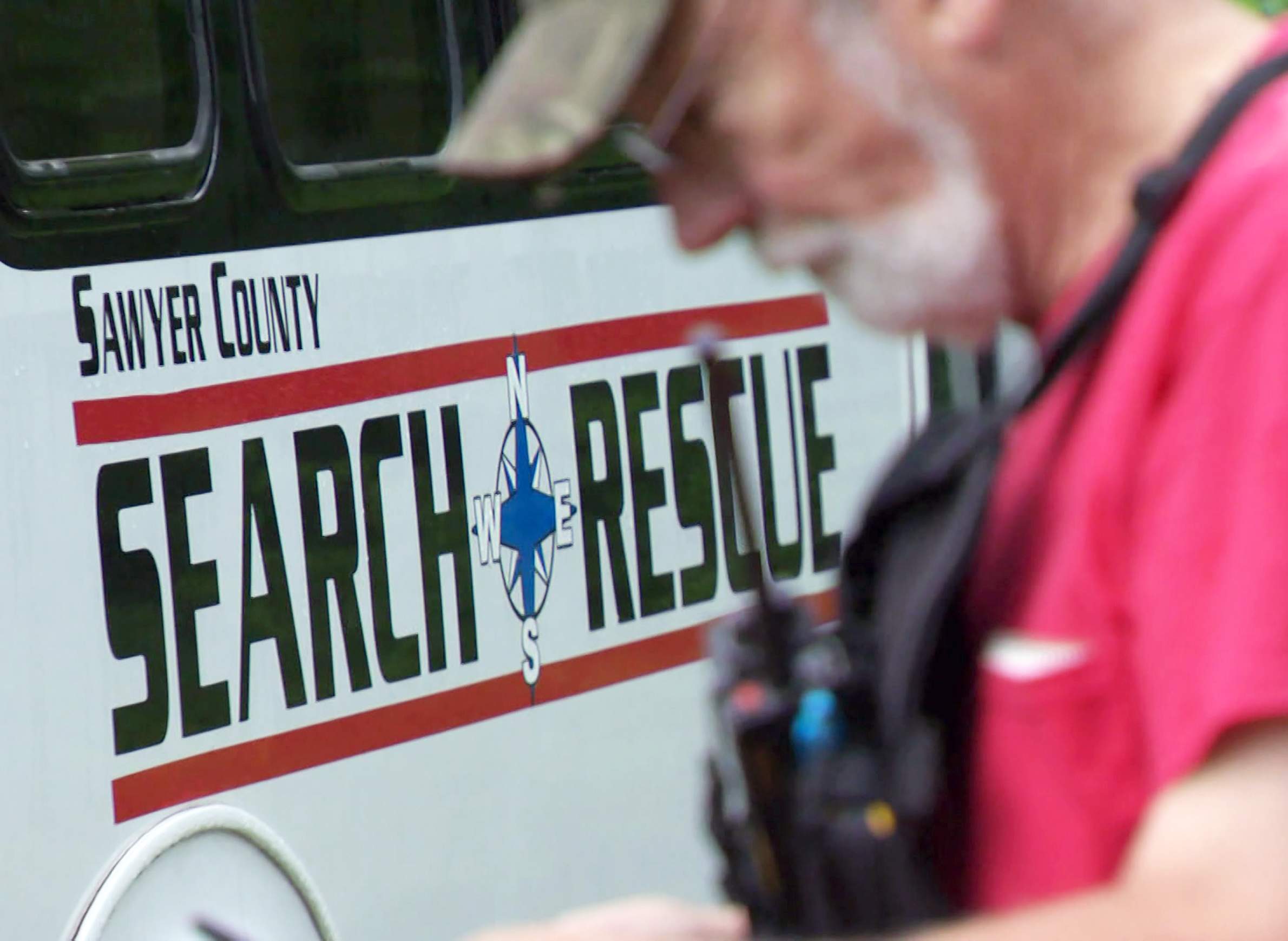 In the days following the October 2018 disappearance of Jayme Closs from her home near Barron where her parents were murdered and she was abducted, hundreds of volunteers fanned out across nearby fields, tramped through woods, and scoured ditches in search of any scrap of evidence that could help track down the missing teen.

Reflecting myriad large-scale searches for missing people across the United States, most of the volunteers who answered local authorities' appeals for assistance were untrained and lacked experience in evidence collection. They were simply concerned neighbors and community members who wanted to help in a desperate situation.

But these novice sleuths weren't the only volunteers who aided local law enforcement in its urgent search for Jayme. In the hours following her middle-of-the-night abduction, the Barron County Sheriff's Department put out a less public request for handlers of specially trained scent-tracking dogs that might be capable of sniffing out possible evidence in the vicinity of the Closs home.

At least some of the K-9 handlers who responded to the call and participated in the sensitive search during a critical stage in the investigation were volunteers. These men and women were part of a statewide network of passionate hobbyists who make up the backbone of Wisconsin's search and rescue apparatus.

Search and rescue volunteers tend to be dedicated to their craft. Some spend thousands of dollars and countless hours training for and carrying out searches such as the one for Closs. They skip meals, sleep and sometimes their day jobs to answer calls for assistance — requests that can come anytime, day or night, 365 days a year. In doing so, these volunteers provide an essential service to law enforcement agencies across the state, and they do so free of charge.

In return, volunteers receive thanks, admiration and usually little else. They may not do what they do for compensation, let alone recognition, but their passion to respond to urgent community needs can leave volunteers and their families without financial protection should they become injured or worse during a search. Meanwhile, other emergency service volunteers, such as volunteer firefighters, are protected by workers' compensation and death benefits should they be injured or die in the course of their volunteer duties.

A critical service at no cost

Many emergency services in Wisconsin and elsewhere depend at least in part on volunteers, including firefighting, emergency medical treatment, and search and rescue. This reliance is a practical necessity in many communities, particularly smaller ones with fewer resources. The vast majority of smaller municipalities in Wisconsin simply do not have the funds to pay for staff whose services they may only need a few times a year or less.

That's why so many communities, particularly in rural Wisconsin, depend so heavily on volunteers to provide firefighting, medical and other emergency services. When it comes to search and rescue, this dependence on volunteers is even greater.

"They bring a lot of value," said Barron County Sheriff Chris Fitzgerald. In the case of emergencies like the Jayme Closs disappearance or the immediate aftermath of the deadly Chetek tornado in 2017, this value takes the form of supplemental support and expertise that can ease the burden on the county's relatively limited resources, Fitzgerald said.

"It'd be great to have all those capabilities, but you just can't when you have a smaller police department," he said.

Barron County Sheriff Chris Fitzgerald, at center, speaks at a press conference about the search for Jayme Closs after she went missing in October 2018. 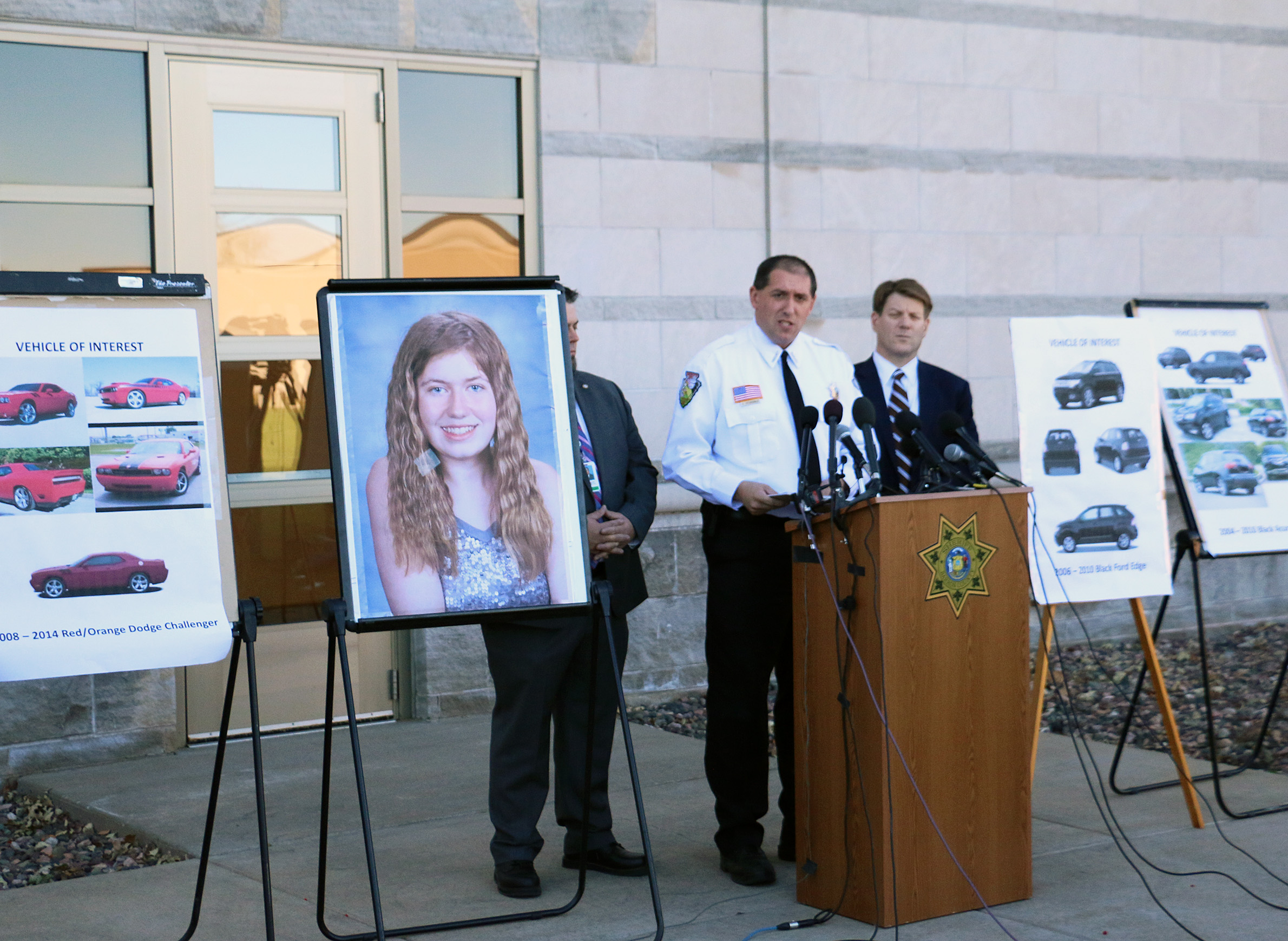 In the Closs case, Fitzgerald said volunteer K-9 handlers and their specially trained dogs searched a perimeter around the crime scene, looking for any possible evidence including weapons, dropped keys or clothing, all under the close supervision of law enforcement officers. Barron County did not have the in-house resources to conduct such a search so quickly and thoroughly, he added.

"They helped us in a time of need," Fitzgerald said. The thoroughness and speed of the crime scene investigation was only possible thanks to the volunteers who provided their time and expert services free of charge.

What it means to depend on volunteers

Several of the volunteer K-9 handlers who responded in Barron when Jayme Closs disappeared take part in search and rescue operations all over northern Wisconsin. One of them is Pat Sanchez. Like many search and rescue volunteers, Sanchez is passionate about the services she and her colleagues in the Sawyer County Search and Rescue Team provide.

Search and rescue is also an aspect of Sanchez's day job. She is the emergency manager for Sawyer County, a position that includes coordinating search and rescue response in the county. However, Sanchez is only paid for the administrative work she conducts out of her county office. When she joins fellow search and rescue colleagues in the field, she does so as a volunteer. If a search takes place during business hours, like many other volunteers, Sanchez takes vacation time.

That's typically not a major problem for Sanchez, who counts herself lucky for having a job that’s usually flexible enough to allow her to respond to a request for assistance at a moment’s notice. However, Sanchez is now dealing with an unexpected and serious illness in her family, and she has almost no vacation or sick time left to go to doctor's appointments or provide caregiving.

"Is it a hardship? Yeah," said Sanchez in a follow-up interview with WisContext. "But would I do it again? I mean, I guess when you sign up to be a volunteer, I would hope you go into it knowing that it is going to impact your personal time … so you've got to kind of accept that."

Also, similar to search and rescue volunteers around Wisconsin, Sanchez has poured thousands of dollars into her hobby-turned-public-service. This investment includes ongoing search and rescue training for herself, as well as hundreds of hours and significant financial investments in training her tracking dog. Indeed, all volunteers who belong to volunteer search and rescue teams in the state have to complete hours of costly training, and many carry certifications for emergency and wilderness medical response. 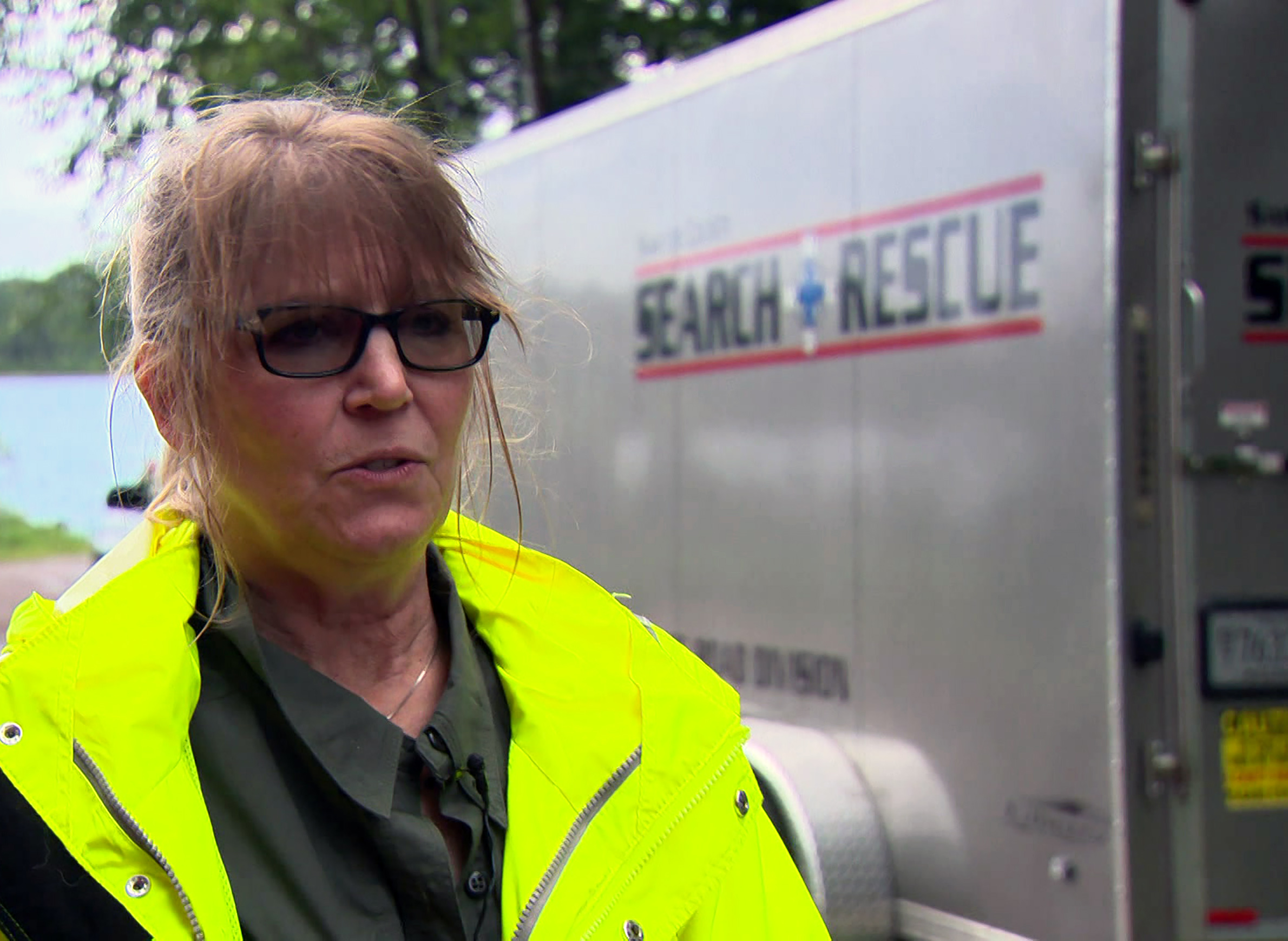 Wisconsin Public Television
Sawyer County emergency management director Pat Sanchez coordinates a volunteer search and rescue team as part of her position, and also participates as a volunteer during searches in the field. Like other volunteers, Sanchez takes vacation time when a search takes her away from the office.

In Wisconsin, sheriffs have the authority to activate a search and rescue response, and some counties have local volunteer teams. However, the Sawyer County Search and Rescue Team has built a reputation in its region for having exceptional technical savvy and resources. The local team includes a few dozen active volunteers at any given time, Sanchez said, though the number who respond to any single search can range from just a few to more than 30, depending on the situation and timing.

Such situations can range from searching a lake by boat for a presumed drowning victim to trekking through snow drifts deep in a Northwoods forest in the middle of a frigid winter night. If a member of the team were to become frostbitten or otherwise injured during a search, they would be responsible not only for paying for their own medical care but for dealing with whatever other financial hardships the injury may trigger, such as income loss.

That's not the case in a handful of other states. For example, in California, search and rescue volunteers and their families are entitled to workers' compensation and death benefits similar to those offered to volunteer firefighters. That's according to Chris Boyer, executive director of the National Association for Search and Rescue, a national search and rescue nonprofit that advocates for volunteers. 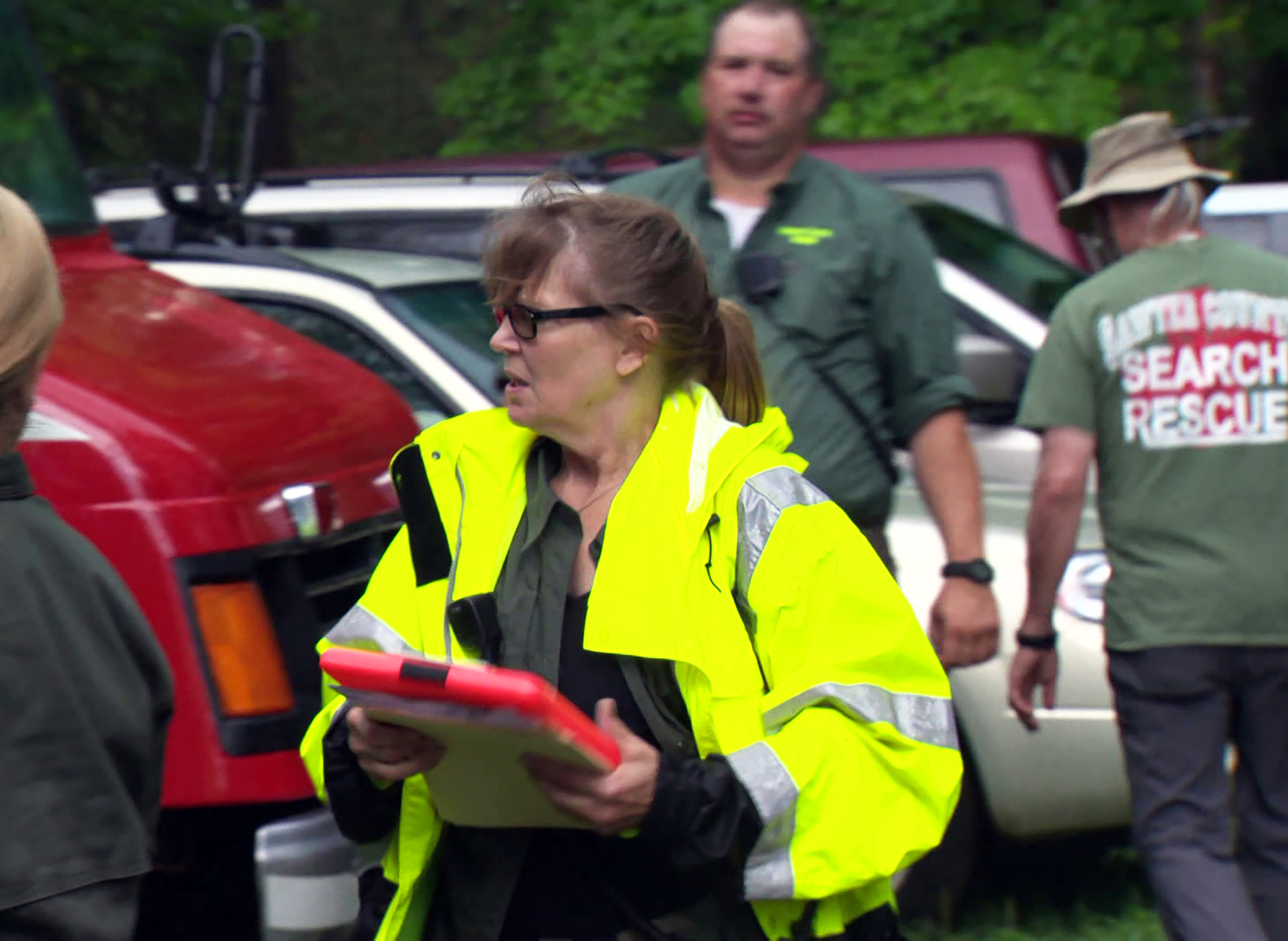 In California in recent years, Boyer tallied a search and rescue volunteer who fell to his death during a search, four members of a volunteer team who were killed by a drunk driver on their way to a search scene, and a volunteer who was shot in the hip when he came across an illegal cannabis growing operation while looking for a missing person.

"Those people were all taken care of. Their medical, death benefit, disability — that was all paid," Boyer said. "Now, we go to Wisconsin and anybody who gets hurt, they're on their own."

Sanchez called California a "leader" in providing protections for search and rescue volunteers that are on par with those that other emergency responders receive.

In Wisconsin, volunteer firefighters, EMTs and members of volunteer "rescue squads," which are akin to emergency medical response teams, are eligible for workers' compensation and death benefits.

"It would be nice if we were treated as equal to fire departments, EMS and law [enforcement]," Sanchez said on Here & Now. "Because we are first responders."

Chris Boyer, the national search and rescue nonprofit director, pointed to another aspect of Wisconsin's system that he said could be improved: tracking the reach and effectiveness of search and rescue operations.

The informality of Wisconsin's search and rescue network means there is no comprehensive tracking or reporting on such operations in the state, including where and when they occur and whether they're successful.

The state does keep track of search and rescue operations where state assistance is requested, according to Andrew Beckett, public information officer for Wisconsin Emergency Management. However, Beckett said most operations remain under the local authority of county sheriffs, and there is no statewide mechanism for reporting those local searches.

In the case of Jayme Closs's disappearance in Barron County, while the initial K-9 search was not fruitful, local law enforcement still considered it — including the participation of volunteers — important and meaningful to the investigation. Nearly three months later, Jayme escaped her captor in rural Douglas County, and he was subsequently convicted in her kidnapping and parents' murders, and was sentenced to life in prison.

Boyer said the state is missing out on potentially valuable information by not keeping track of requests for search and rescue and the different outcomes of those operations.

Why Volunteers Are Central To Search And Rescue Efforts In Wisconsin
The Hazard Of COVID-19 Heading Up North For Summer
Washed Away: Northwest Wisconsin Copes With The Costs Of A Changing Climate
Hayward Weighs The Risks And Costs Of The Next Deluge
The Life Of Land After Frac Sand