Meet The Wisconsin Doctors Who Uncovered The Vaping Illness Outbreak 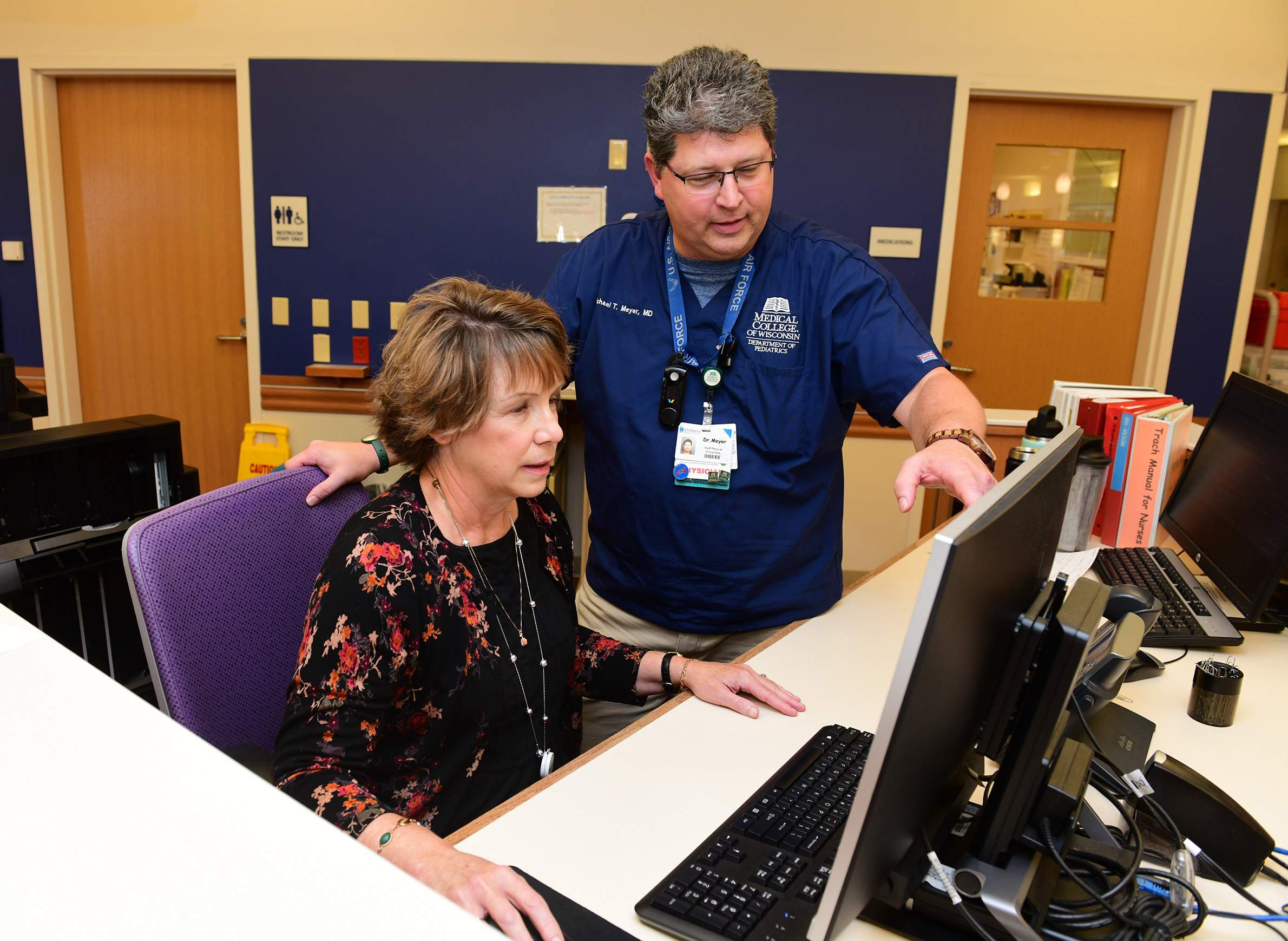 Dr. Lynn D'Andrea knew something was amiss when three teenagers with similar mysterious, dangerous lung injuries came into the Children's Hospital of Wisconsin one after another, gasping for air.

As the only pulmonologist on duty at the Milwaukee hospital that Fourth of July holiday week, D'Andrea noticed those alarming cases followed on the heels of another teen who had a non-infectious condition with matching symptoms.

"We need to be thinking about something else," she told Dr. Michael Meyer, medical director of the Pediatric Intensive Care Unit, as he later recounted.

That "thinking about something else" led to the discovery of about 1,300 probable vaping-related injury cases in 49 states, the District of Columbia, a U.S. territory and Canada, as of Oct. 8, 2019. At least 26 people have died. While the exact cause of the illness remains unclear, President Donald Trump is considering a ban on flavored e-cigarettes, and Walmart has taken them off its shelves altogether.

The epidemic has prompted outrage about federal oversight of vaping, but there is also a local public health success story to be told. Doctors and regional officials in Wisconsin, Illinois and elsewhere pieced together that this mysterious illness was much larger than it appeared. It's a tale of teamwork, communication and long-serving public health officials tapping into their networks in an era of limited public health funding, diminished public health infrastructure and high turnover.

It's surprising in some ways that Wisconsin became ground zero for uncovering the link. The state has ranked near the bottom nationwide for per-person spending on public health until a huge boost of $588 million more was greenlighted for the next two years. Wisconsin is also home to Juul vaping pod manufacturing sites, and one of its U.S. senators, Republican Ron Johnson, credits his win to vaping advocates.

And yet the state's officials discovered the outbreak, which shows no signs of stopping.

"I don't think anyone could have anticipated how wide-reaching this problem has become," D'Andrea wrote in an email.

Although isolated cases of vaping-related respiratory problems were spotted elsewhere, including as early as 2015 in West Virginia, a new wave of cases began popping up across the country starting in mid-April 2019.

Otherwise healthy patients, many of them teenagers, complained of shortness of breath. unexplained weight loss, fatigue and gastrointestinal issues. They were often diagnosed with acute respiratory distress syndrome — essentially a lung injury from an unknown cause. The cases baffled health providers nationwide.

In North Carolina, clinicians puzzled over how healthy teenagers could suddenly be so ill that they needed ventilators for something that wasn't infectious, said Zack Moore, the state's epidemiology chief.

But in Wisconsin, doctors from Children's Hospital used extensive patient histories to piece together the missing link among that cluster of four cases: vaping.

This is no easy feat when dealing with teenagers who may not want to admit to vaping in front of their parents — especially when it comes to vaping THC oil, the psychoactive chemical in marijuana. But for D'Andrea, a 25-year veteran who specializes in breathing issues among children and leads the hospital's pulmonary team, the patients' openness is part of what made the discovery possible.

"They were part of the 'team' who was trying to help us figure this out," she said.

After discussing the cases with Meyer and other colleagues, D'Andrea called Dr. Michael Gutzeit, the hospital's chief medical officer, on July 8. That phone call raised the warning from within Children's Hospital to the local health department, then to the state health department and eventually to the Centers for Disease Control and Prevention in Atlanta — effectively putting this health crisis on the nation's radar. 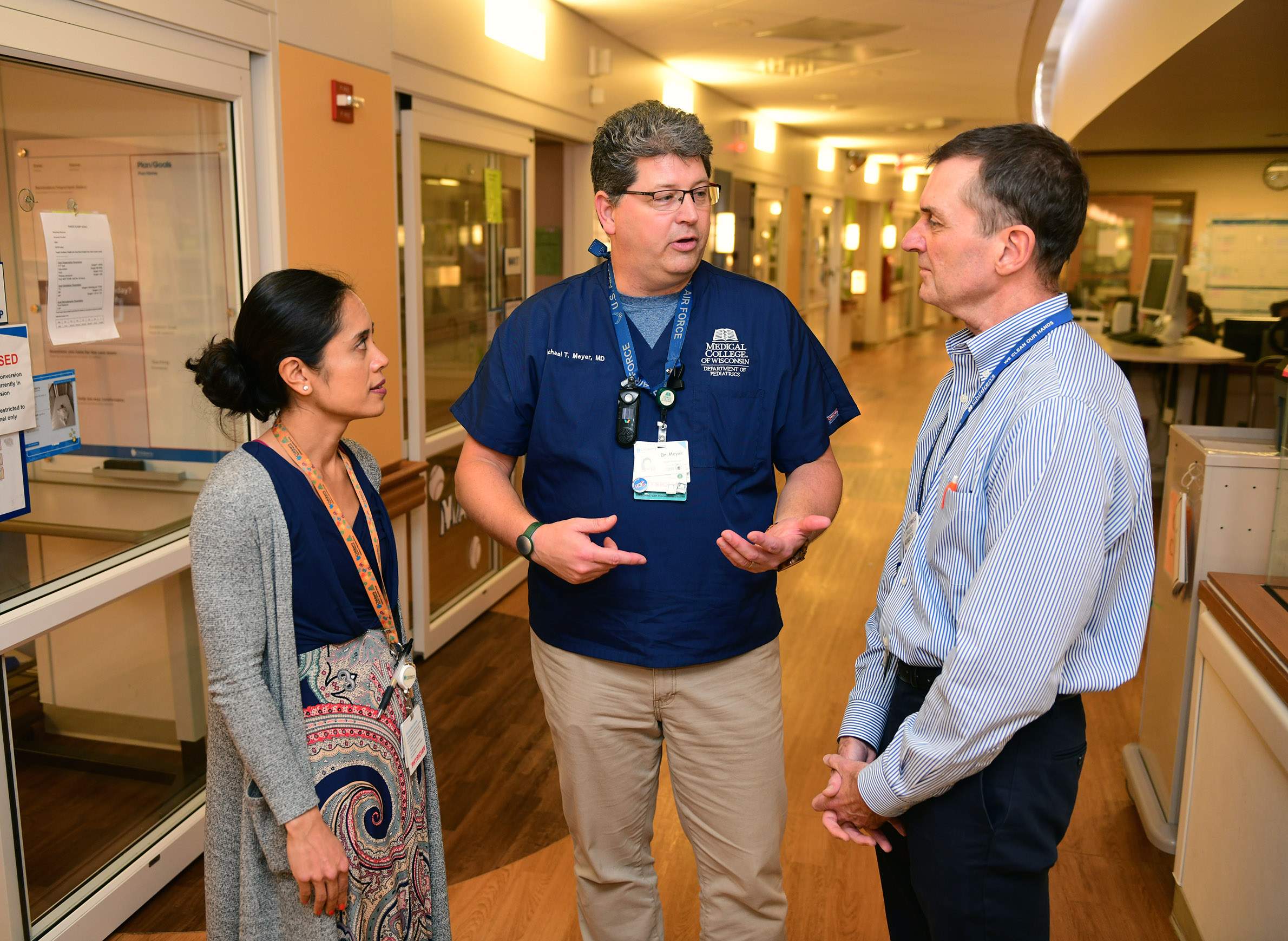 "It's incredible that they saw this," said Dr. Jeffrey Gotts, a pulmonologist at the University of California-San Francisco. "As front-line clinicians, there are very few things that we would report to public health authorities in the ICU. It's not that unusual to have people show up with respiratory failure."

From local to state

Because the four patients with these symptoms at Children's Hospital of Wisconsin were from Waukesha County just outside Milwaukee, infection specialists from the hospital gave the local health department a call.

"They didn't know how vaping would be involved" with these mysterious cases, said Haupt, a 34-year veteran of the Department of Health Services. "They called me right away."

Haupt was immediately alarmed. He put down the phone and marched to the office of Chief Medical Officer Dr. Jonathan Meiman on July 10, interrupting a meeting.

"We need to talk about this," he recalled saying.

At that point, both the hospital and Haupt knew only that this was a local problem — and one that was getting worse. "It went from four cases to eight," Haupt said. The team retroactively realized they had treated a patient admitted June 11 with similar symptoms, and had three more come in by July 19.

Haupt went to work notifying fellow public health officials across state lines in case this mysterious illness reached beyond Wisconsin, emailing two groups. Twelve years ago, he had set up a Midwest Influenza Coordinators Group, composed of officials from 11 states in the region to better manage flu season. He also helped lead the Council of State and Territorial Epidemiologists.

"Communication is always the biggest asset you've got as far as any disease investigation," Haupt said.

It didn't hurt that most of the people on these emails had run in the same public health circles for years. Several wrote back that they'd check things out with their poison control centers and public health departments.

A letter submitted to The New England Journal of Medicine and published Oct. 6, 2019 details imaging of the chests of four patients diagnosed with vaping-related lung injury. 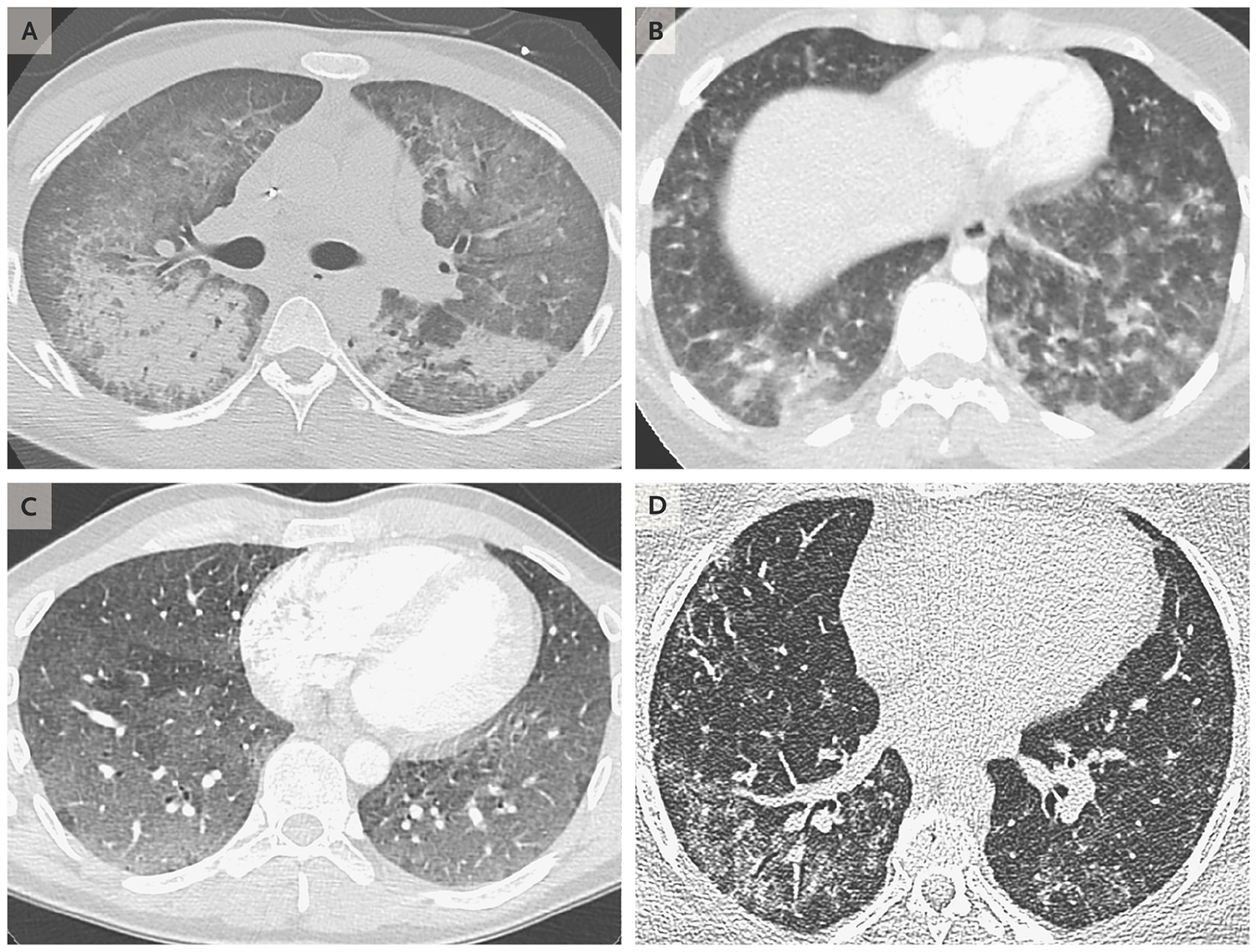 The New England Journal of Medicine ©2019

In the meantime, the state health department and Children's Hospital coordinated a press announcement and clinicians' alert on July 25. Communication and trust was easy — Meiman and Michael Gutzeit had worked together previously on Ebola preparedness efforts a few years earlier.

The news conference was livestreamed on Facebook. Following the briefing that day, another set of Wisconsin parents took a teenager with similar symptoms to the hospital.

The case In Illinois

Within days, a clinician in Illinois who had seen the coverage called the Wisconsin state health department worried that a patient in Illinois might have the same condition. That's when Jonathan Meiman called his Illinois counterpart, Dr. Jennifer Layden, to let her know her state might have the mysterious illness, too.

"We started calling health departments and hospitals to see if others had this very vague description," Layden said. "In a couple of days, just by those calls, we had two other patients."

In San Francisco, Dr. Elizabeth Gibb saw a patient whose mom had seen the news out of Wisconsin and asked if it might be connected to her hospitalized teenager. 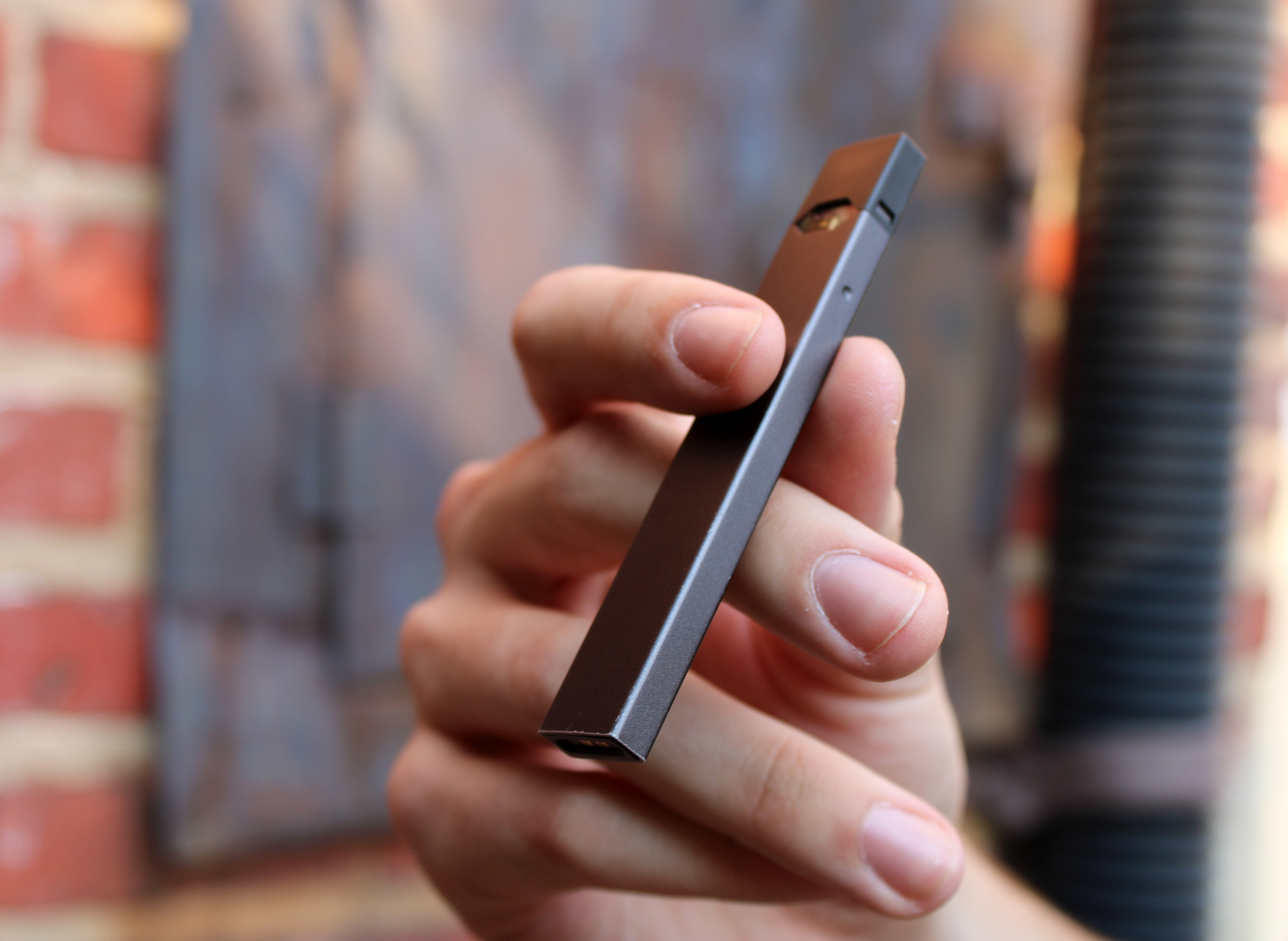 Georgia Geen/VCU Capital News Service (CC BY-NC 2.0)
Patient histories were key to identifying the common practice of vaping among the initial group of teenagers with mysterious lung injuries who sought treatment at Children's Hospital of Wisconsin.

By Aug. 2, Illinois had put out a clinicians' alert looking for more cases. Wisconsin was up to 11 cases.

As more cases appeared across the country, Wisconsin drafted a questionnaire for states to send out to clinicians, so they could all have a similar case definition and work off of similar data, Thomas Haupt said. At least 20 people in the Wisconsin state health department hustled on the response — on top of their regular workload.

Following the news of a case across the border in Illinois — and one month since that first phone call from Lynn D'Andrea to Michael Gutzeit — the Wisconsin health department decided to send out an Epi-X alert on Aug. 8. That's an alert to all state health departments on the Epidemic Information Exchange network run by the CDC.

After the bulletin announcing Wisconsin had up to 25 suspected cases linked to vaping, calls poured in from New Jersey to North Carolina.

From there, it started to snowball.

The CDC announced on Aug. 17 that 94 possible cases existed, kicking off a media frenzy that culminated in national awareness of the dangers of vaping and cries for the head of the Food and Drug Administration to resign.

Within days, the CDC dispatched a team — two people to Illinois, two to Wisconsin — that helped comb through cases. Jonathan Meiman and Jennifer Layden continued to work together to further define the condition and coordinate information from other states.

As the caseload has quintupled, much still remains unknown about the illness. Many experts don't believe this outbreak will end anytime soon. Still, Thomas Haupt said he's incredibly proud of the work the officials in Wisconsin — from Children's Hospital to the state health department — did spotting it. He believes their notification may have helped save lives.

"That's the way public health is supposed to work," he said. "And trust me, it doesn't always work that way."

Editor's note: Kaiser Health News is a nonprofit news service covering health issues. It is an editorially independent program of the Kaiser Family Foundation that is not affiliated with Kaiser Permanente. This article was originally published on Sept. 25, 2019.

Vaping Advocates Aim To Mobilize Opposition To E-Cigarette Regulations
Why Vaping Became A Public Health Priority In Wisconsin, The US
How COVID-19 Capped A 'Bizarre' Flu Season In Wisconsin
Most COVID-19 Patients In Wisconsin Have Recovered, But What Does That Mean?
Clues To Wisconsin's Coronavirus Present Echo From Its Pandemic Past