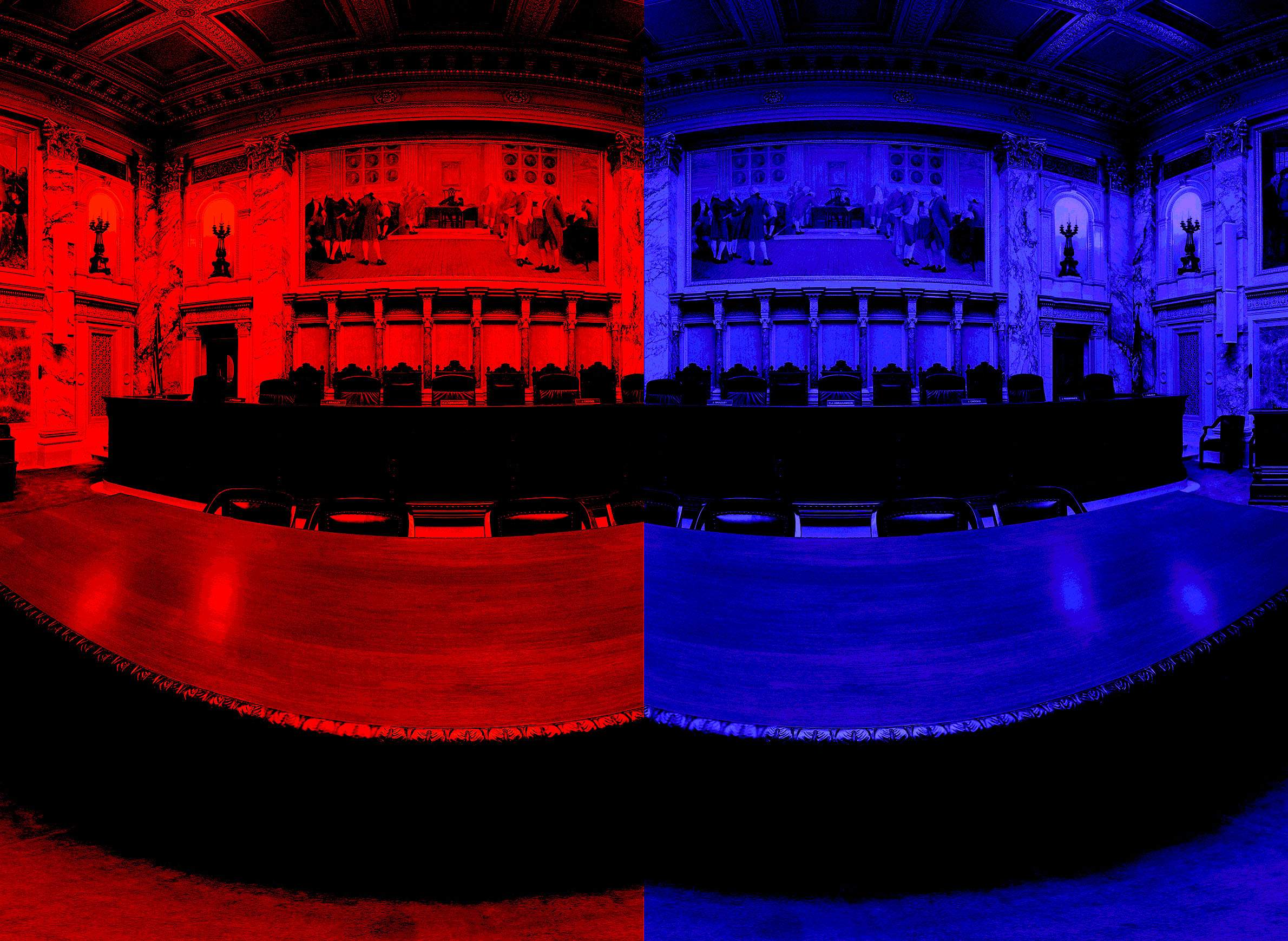 Illustration by Kristian Knutsen and Scott Gordon; image via Ryan Wick (CC BY 2.0)

Voter turnout was low yet higher than the recent average for a February ballot when Wisconsin held a primary election for a state Supreme Court seat on Feb. 20, 2018. While debates rage on about whether judges should be elected at all, there are also differing views on the question of whether judicial elections should be partisan or non-partisan.

A fairly small number of states across the United States — six of the 38 that elect judges — use partisan elections. However, many states, including Wisconsin, hold non-partisan state Supreme Court elections, which means that party labels are not provided alongside candidate names on the ballot. The use of the non-partisan ballot was a Progressive Era reform, the hope being that it would remove the influence of national parties from local affairs. Interestingly, although Wisconsin technically has non-partisan elections, partisanship has been on full display in recent state Supreme Court races.

Indeed, during the 2011 Wisconsin Supreme Court campaign, which pitted conservative incumbent Justice David Prosser against liberal challenger JoAnne Kloppenburg, much of the focus of the race was on the state's GOP governor and the Act 10 debate. That election was described in the New York Times as "a referendum on Wisconsin’s new Republican governor, Scott Walker, his collective bargaining bill, and, more broadly, the Republican politicians who now control the Capitol."

It's not just other state-level politicians that have been linked to Wisconsin Supreme Court candidates, though. National political figures are also discussed in the context of state Supreme Court elections. In the 2011 race between Prosser and Kloppenburg, Sarah Palin endorsed Prosser. In the February 2018 primary for an open seat, which featured two liberal candidates, Tim Burns and Rebecca Dallet, and one conservative, Michael Screnock, partisanship and President Donald Trump played a central role in the race. In fact, Dallet even used footage of Trump in a campaign ad.

Partisan politics has seeped into the race in other ways as well. Screnock received a large sum of campaign money from the state Republican Party, while Burns and Dallet each spoke at a state Democratic Party convention.

Let's start with the 2018 Wisconsin Supreme Court primary election. To what extent was support for Trump during the 2016 presidential election related to the 2018 state Supreme Court vote?

The following chart displays the relationship between Trump's share of the two-party vote in the November 2016 general election and the share of the vote garnered by Screnock, the conservative Wisconsin Supreme Court candidate, in the February 2018 primary. There is clearly a strong, positive relationship between the county-level presidential vote and the state Supreme Court vote.


It's helpful to look at previous Wisconsin Supreme Court races to see if the same relationship characterizes those elections.

The following chart displays the relationship between Republican presidential candidate Mitt Romney's performance in Wisconsin counties in 2012 and incumbent Justice Rebecca Bradley's share of the vote in the 2016 state Supreme Court general election. (The 2012 race between Romney and incumbent President Barack Obama was the most recent presidential election before the 2016 state Supreme Court race.) Appointed by Governor Walker in 2015 to fill a vacancy on the court, Bradley was widely viewed as the conservative candidate, while her opponent JoAnne Kloppenburg, returning to the ballot five years later, was similarly seen as the liberal candidate.


Again, there is a strong, positive relationship between the county-level presidential and state Supreme Court vote. The correlation between the two measures is .87.

The increasingly nationalized nature of non-partisan state Supreme Court elections is a development that many are likely to find frustrating. Progressive Era reformers would certainly not be happy. However, as Wisconsin moves toward the spring general election on April 3, partisanship shows no sign of fading. Indeed, a New York Times report indicates that former U.S. Attorney General Eric Holder, who served in the Obama administration, will visit Wisconsin during the state Supreme Court general election campaign.

Like it or not, partisanship has become a permanent feature in Wisconsin's non-partisan Supreme Court elections.

Aaron Weinschenk is an associate professor of political science at the University of Wisconsin-Green Bay.