The Perennial Lessons To Learn From Public Health Policy Battles 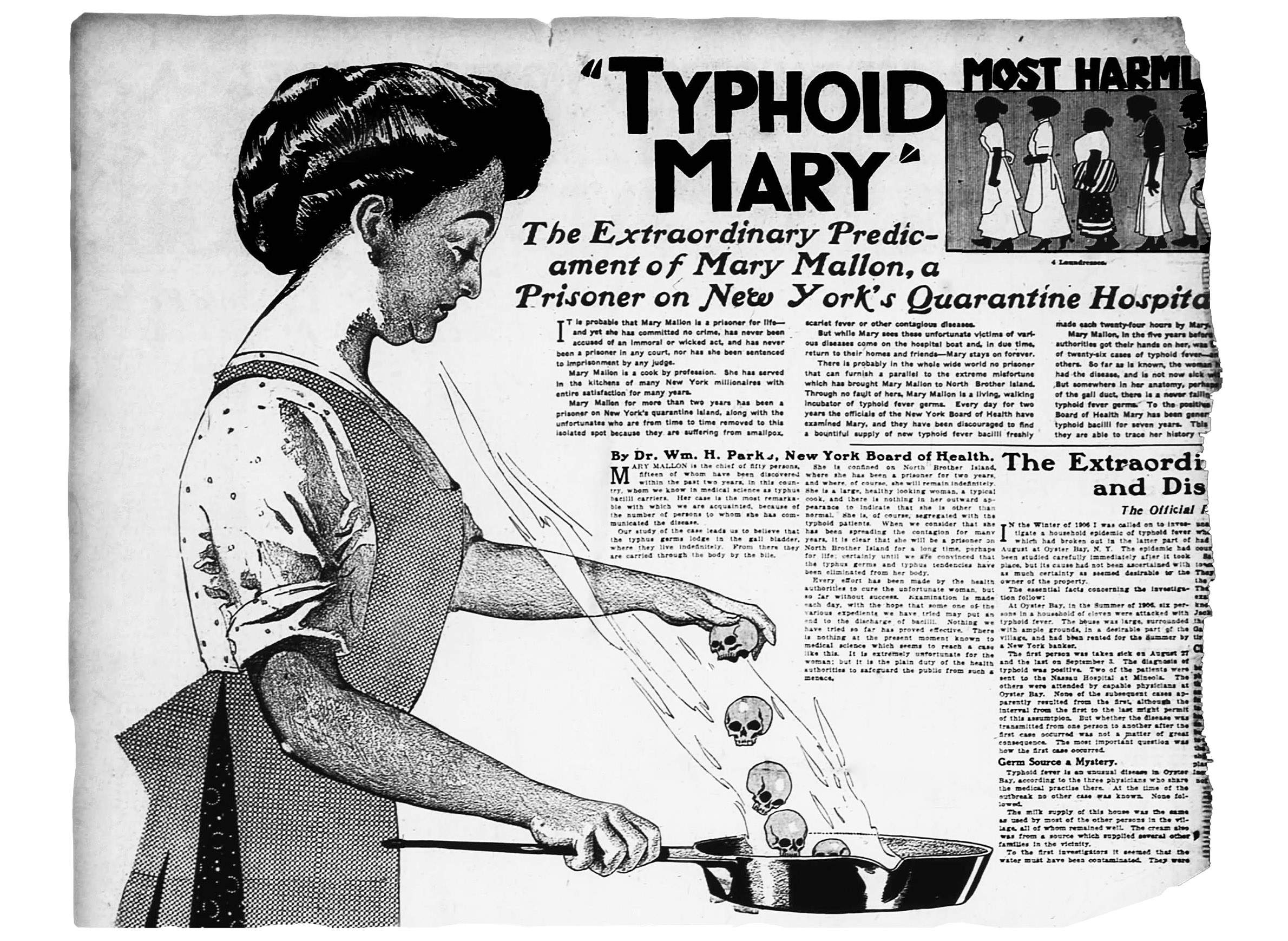 Many people have heard of Typhoid Mary, but far fewer know the name Mary Mallon. For those familiar with the story of the actual person who would become known as an infamous spreader of disease, though, the name Judith Walzer Leavitt might also ring a bell.

Leavitt’s 1995 book, Typhoid Mary: Captive to the Public Health, tells the story of Mallon, an Irish immigrant cook in New York and asymptomatic carrier of typhoid fever who was involuntarily quarantined and spent years in isolation during the early 20th century. The questions raised through Leavitt's examination of the media, the legal system and public health officials' reactions to a woman charged with being a "Menace to the Community" remain to this day.

For some historical perspective on public health responses to disease outbreaks, WisContext spoke with Leavitt, a medical historian and Rupple Bascom and Ruth Bleier Professor Emerita at the University of Wisconsin School of Medicine and Public Health. She talked about the practice of public health throughout American history and how differing experiences between communities plays a role in these efforts. The following interview was edited for length and clarity

Andy Soth: What do you make of what's happening now with COVID-19?
Judith Walzer Leavitt: I'm a historian, so I can't really add anything beyond what the news tells me about the current situation. I mean, what can I tell you? It's terrible.

As a historian then, what lessons from the past seem especially relevant today?
Well, we certainly learned from the past that it's very important that public health infrastructure be up and running all the time so that it's ready when something like this happens.

The 19th century, for example, was a time when health departments — really starting mid-century and going into the 20th century — built up their ability to fight contagious diseases, epidemic disasters, sanitary environment issues, et cetera.

The Wisconsin State Board of Health and the Milwaukee city Board of Health both gained in power and authority and budget and hiring over the course of the second half of the 20th century. It was very important to have that kind of infrastructure to address health issues when they arose.

People who work in public health still think that inoculation and isolation are the two mainstays along with contact tracing for epidemic and contagious diseases. I don't think that's gone away. I think what's gone away is their ability to do it — to have enough money and staff and support.

Your research has documented many times when public health was delivered inequitably. You and your husband wrote an opinion for The Progressive magazine published just as the crisis was ramping up warning this may happen again. What motivated you then and what have you seen since?
Public health, even at its best in the 19th and 20th century, has only sometimes been equitable. That is, very often the policies are leveled at different populations with different degrees of strength.

That kind of response has been fairly typical in public health. So poor communities, immigrant communities and, later on, African American communities found very much that the government response came to them unequally. And the reason we wrote the op-ed about today is we were warning that that has been the case historically, and we should be aware of it in the present situation.

We certainly see that the African American community today are very hard hit with the coronavirus and are dying at a much greater rate than the white population. And, of course, that just doesn't have to do with the way policies are being applied. That has to be part of it. But it's also because of the history of the health problems the African American community brings to the current situation, which haven't already been alleviated by public health measures. So they end up getting the brunt of this attack unfairly.

Yet the most visible protests about COVID-19 issues have been against "Safer at Home" orders. Can you also make a case that small businesses that have had to close and layoff workers are also affected unfairly?
The business community has always been pretty split on public health. Usually it is the bigger companies that support public health because they can afford the new regulations. The smaller businesses can't and therefore oppose it. I think that inequality has existed for a long time and we still see it today.

That is the rhetoric around the congressional action to support small businesses. They understand that big businesses can clean up things, put up plastic barriers, have people wear masks, disinfect everything and not completely go out of business with expenses. Small businesses really find it difficult to do that. That's been a perennial problem for public health.

Again, it's another reason why government needs to understand these issues and how they play out. Not just with big and small businesses, but in different cultural niches in the country to understand what languages they need to use, what kind of support they need in the community.

Where has understanding a cultural niche led to successful public health outcomes?
In the early 20th century, when Milwaukee had a big infant health push, the first people they contacted were the churches in the community — the places where they were trying to get prenatal care and infant feeding programs going — to get them on board.

So I think that there are so many issues that have to be thought of when you're doing public health work and the actual magic bullet or the vaccine is only one part of what needs to be on the agenda, if you're going to be successful.

What about the cultural niche inhabited by those protesting public health policies? Can you reach them?
They have a point about personal liberty and they certainly have a right to protest. But if the public health people could break their shell and help them understand what is happening to everybody — that we have obligations to one another, especially in times of crisis, then they would be more effective.

But I think they think this is not possible. First of all, in the last few years, our country has brought out into the open some of the divisions that probably were there before, but now people don't need to hold back in saying what they think. That's a big issue.

We also have a perception that we are different, and the difference can be hierarchical in many respects in many people's minds. There are ways the outrage is urged on by people who don't like policies of public health restrictions.

One of our [state] Supreme Court justices said, well, the meatpacking industries are hard hit in Green Bay, in Brown County more generally. And, well, they're just they're not us, they're not the general population.

Of course they're us. But that's the thinking. They are so far removed from who that person is, that she can say that, without thinking there's anything wrong with saying it. It's just appalling. But that is the kind of thing that people find easy to do. If somebody who is not like them is affected, that it's not as bad as it would be if people like them were affected.

One important but mostly forgotten moment in the history of public health in Wisconsin was in 1894, when an outbreak of smallpox in Milwaukee was met with a zealous response by the city's health commissioner and was in turn met with a reaction that started with rioting and ended with an impeachment. Walzer Leavitt explored this episode and its implications for public health efforts in Milwaukee in her 1982 book The Healthiest City. She spoke about the riots and their legacy in a May 13, 2020 interview on Wisconsin Public Radio's Central Time.

With national attention during the COVID-19 crisis focused intensely on many aspects of how Americans have confronted disease outbreaks in the past, particularly the tension between civil liberties and public health, the scholarship by Leavitt is receiving renewed attention, with multiple books she has written being featured on pandemic reading lists. Her works include Brought to Bed, which recounts the history of childbearing in America from the late colonial era through the mid-20th century, and Make Room for Daddy, which explores the social changes that led to increased inclusion of fathers in labor and birth. Her biography of Mary Mallon inspired the PBS NOVA documentary The Most Dangerous Woman in America.

Clues To Wisconsin's Coronavirus Present Echo From Its Pandemic Past
What Does The 1918 Flu Reveal About The Economic Impacts Of A Pandemic?
The New Partisan Peak Of Wisconsin's 2020 Pandemic Supreme Court Election
How COVID-19 Capped A 'Bizarre' Flu Season In Wisconsin
Most COVID-19 Patients In Wisconsin Have Recovered, But What Does That Mean?