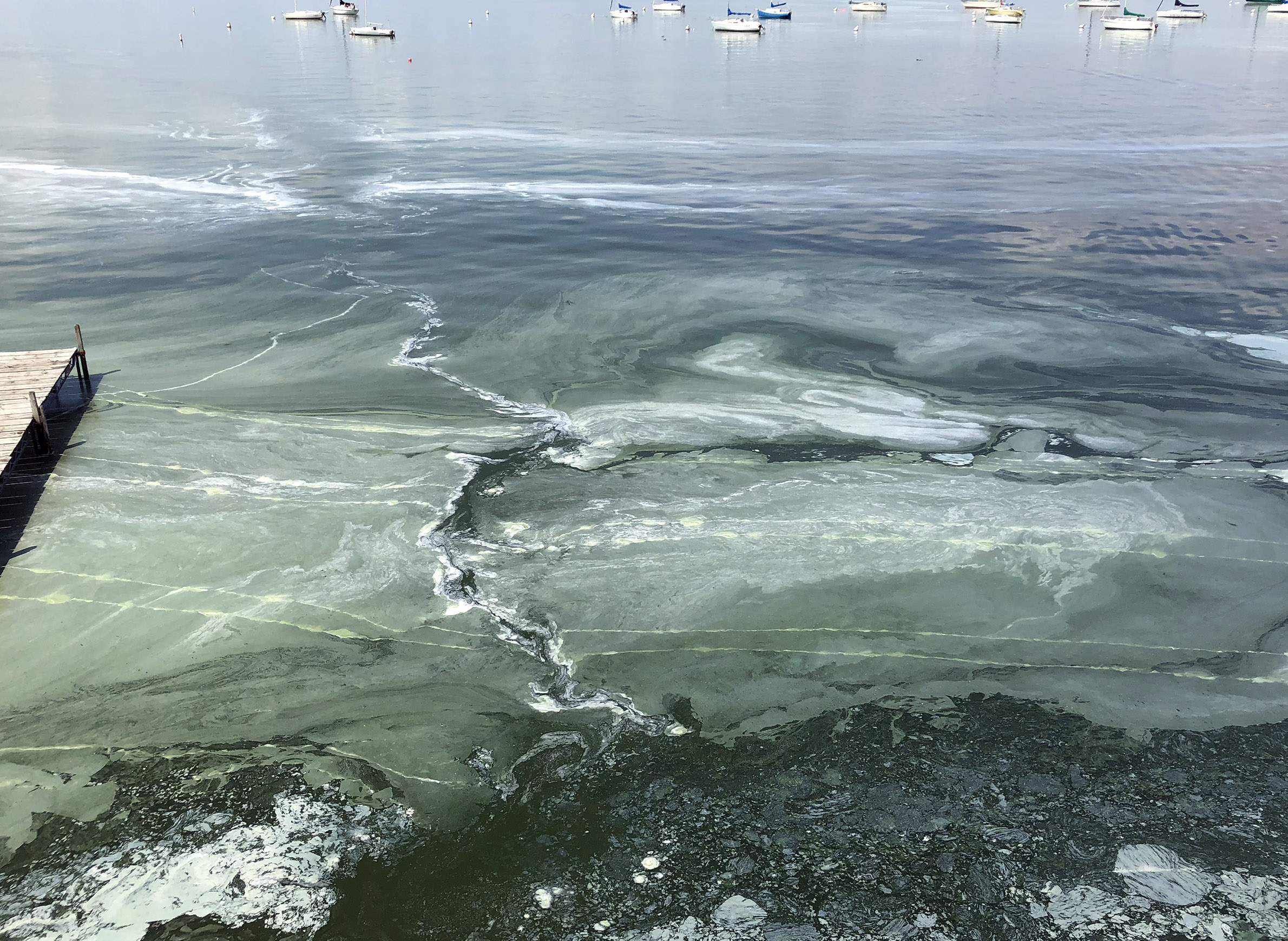 The vast majority of what happens under the surface of lakes goes unrecorded, meaning potentially important ecological stories are often lost to history. These stories are the currency scientists use to better understand natural resources in Wisconsin, yet they slip away in even the most highly monitored places.

Madison's Lake Mendota, championed as the most well-studied in the world, is one such case. Since the late 1970s the lake has been sampled roughly 15 times per year as part of routine monitoring that has yielded major advances in ecological understanding. Interpreted another way: In this best-case scenario, there are 350 days per year that Lake Mendota goes unsampled, not to mention the lake's condition prior to routine monitoring.

However, scientists have access to at least some of the lake's history thanks to the sediments that settle onto its bed, quietly keeping a record of its past. Each layer of sediment builds on the last, collecting dead, decaying organisms and discarded matter, all of which can be used to examine the ecological history of lakes, much like tree-rings or ice cores. Using these natural archives, researchers can fill the gaps in long-term monitoring data to better understand Wisconsin's lakes.

The sediment at the bottom of Lake Mendota is a dark and foul-smelling muck, but it tells a story. This story — as written in a four-foot plastic cylinder of sediment known as a sediment core — is split into two distinct chapters that span the past two-and-a-half centuries. 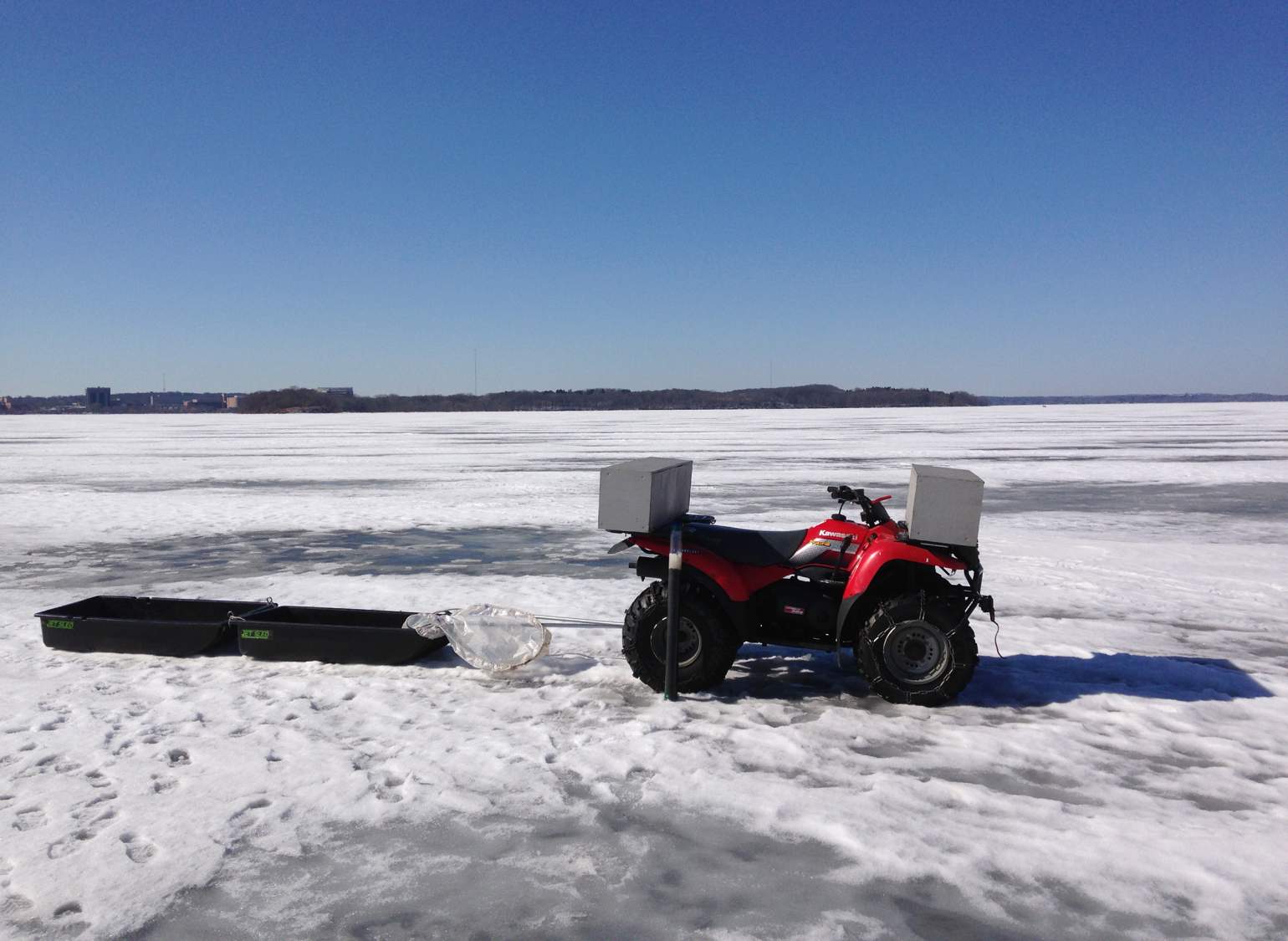 Winter is a good time to collect a sediment core from lake in Wisconsin — if the ice is thick enough to support the equipment.
Courtesy of Jake Walsh 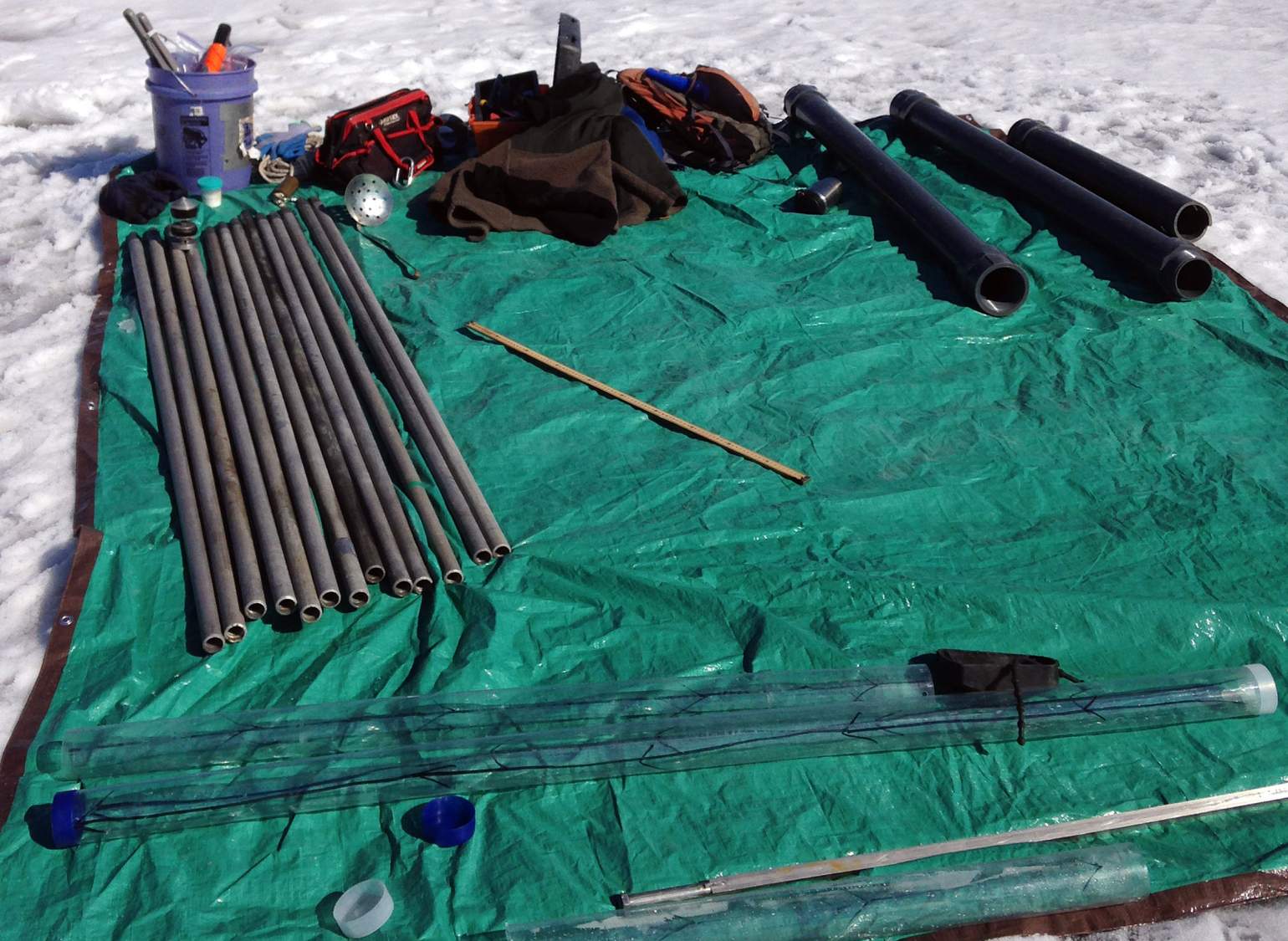 Some of the equipment required for collecting a sediment core sample rests on the lake ice.
Courtesy of Jake Walsh 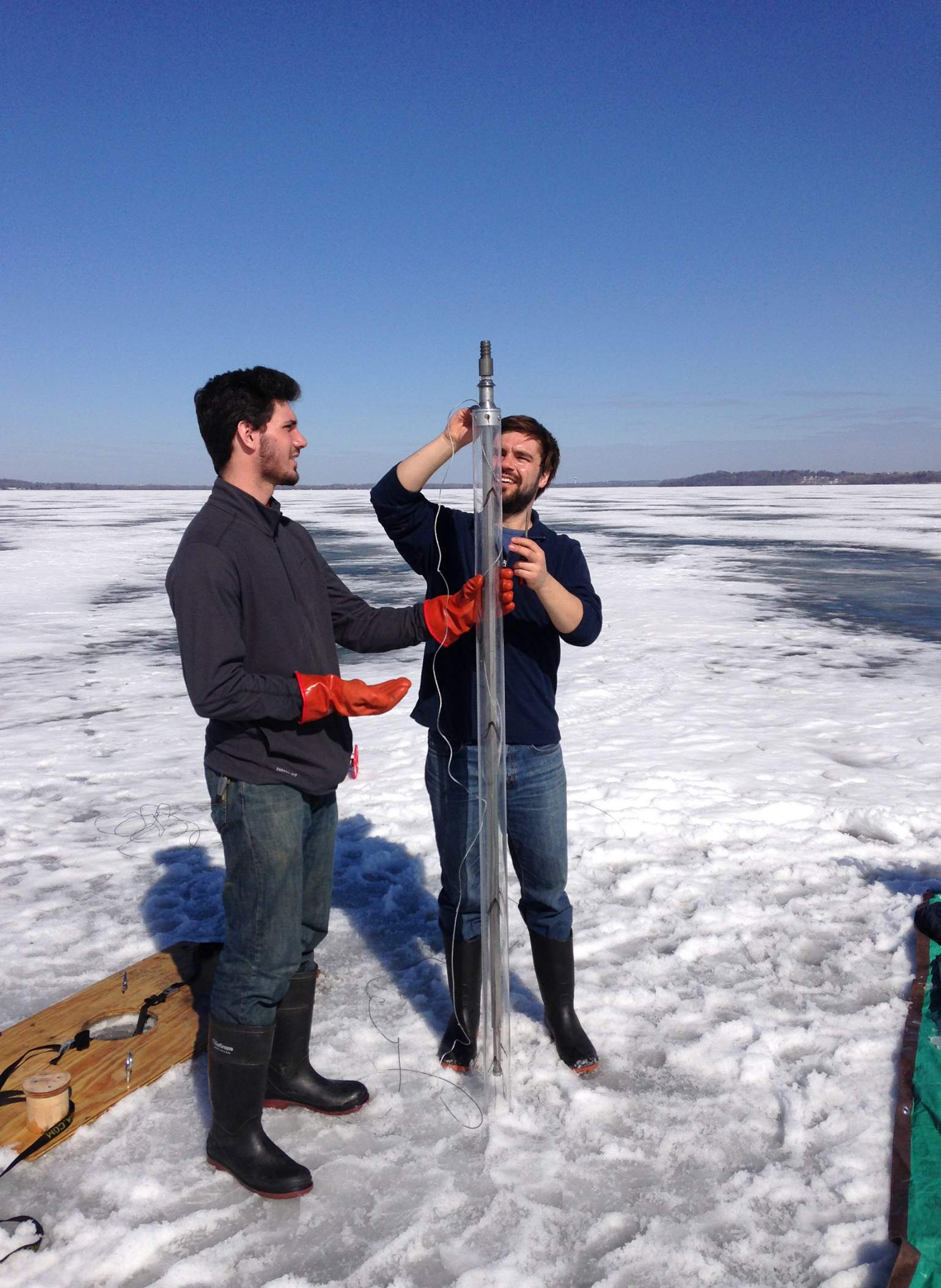 UW researchers Tommy Shannon (left) and Sam Muñoz, a study author, collect a sediment core sample from the bottom of an ice-covered Lake Mendota in Madison.
Courtesy of Jake Walsh 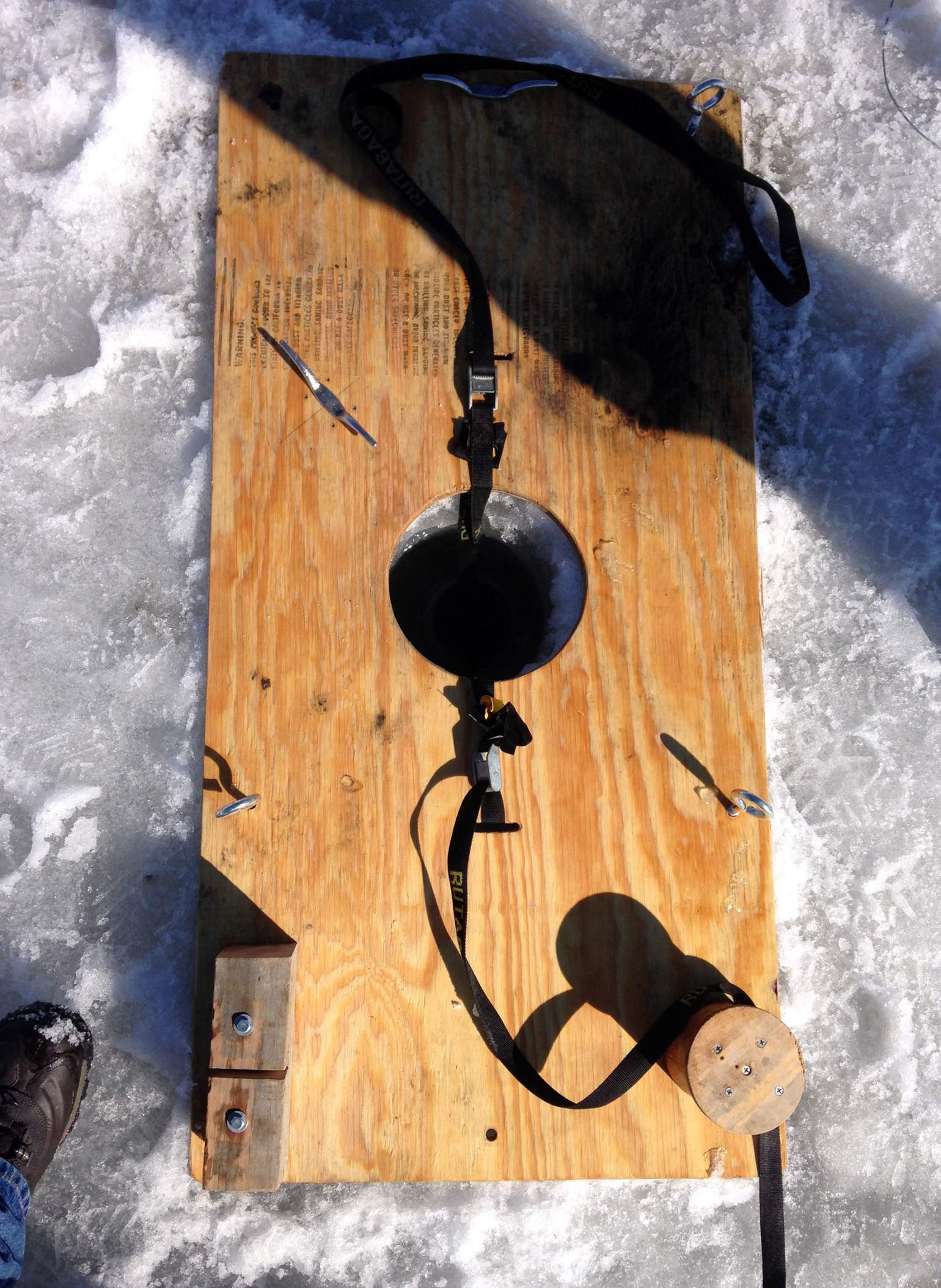 A hole drilled into the ice covering Lake Mendota provides a site for collecting a core sample.
Courtesy of Jake Walsh

The first chapter, based on the core's older sediments, is familiar: Deeply buried sediments in the core outline the history of population growth, pollution and declining water quality in the lake. However, newer sediments at the top of the core reveal a dramatically different and more hopeful second chapter of this story. Perhaps more importantly, carefully studying these top sediments also uncovered a potential path forward to developing a new, better story of water quality in Lake Mendota and similar lakes across southern Wisconsin.

Ecological history in the muck of Mendota

Like many water bodies in Wisconsin, Lake Mendota is extremely productive, meaning its algae and plants grow abundantly and quickly. Intensive agriculture in the lake's watershed acts as a fertilizer that boosts productivity. As a result, the food web of the lake churns through resources and short-lived algae and aquatic animals at a blinding pace.

As resources are used and organisms live and die, matter and tissue rain to the bottom of the lake, depositing more than two feet of sediment with a texture like chocolate mousse. Also known as "gyttja" or simply "ooze," this sediment rests on top of a crusty graham cracker crumble of marl, which is made up of various calcium carbonate-based minerals originating from the limestone surrounding the lake.

The point at which the "chocolate mousse," or ooze layer, and "graham cracker crust," or marl layer, meet below Lake Mendota corresponds with the beginning of European settlement in the lake's watershed. In other words, as agriculture and urbanization in Madison intensified, leading to more nutrient pollution into the lake from manure runoff and sewage, there is a clear shift in the composition of the sediments. This shift is so obvious that it was visible from the moment the clear plastic coring tube came out of the lake.

Curiously, the top 8 inches of the ooze layer are noticeably different from the darker layers making up the rest of the 2-foot surface sediment. The top layer actually looks more like the deeper marl layers of the core.

A new era of sedimentation

The surface layers of a Lake Mendota core are marked by distinct light bands known as laminations. They're made primarily of calcite: calcium carbonate that originates from limestone in the watershed.

For polluted and productive lakes like Mendota, calcite is important because it can bind to the key nutrient — phosphorus — that fertilizes algae blooms. Because calcite crystals are denser than water, they sink to the bottom of the lake, along with the attached nutrients that could otherwise have fueled a bloom in the surface waters. Limnologists call this phenomenon a "whiting event."

A new control on water quality

When combined, all of this evidence suggests that recent calcite whiting events in Lake Mendota may have reduced the nutrients available to algae, changing the quality of its water.

This hypothesis is supported by monitoring data from the North Temperate Lakes Long-Term Ecological Research. Those data show that when the chance of a whiting event in Lake Mendota has been high, the concentration of phosphorus in the water has been low.

In productive lakes nested in limestone-rich watersheds, like Lake Mendota, large algae blooms can actually create conditions that are favorable for whiting events by altering water chemistry. That’s because when algae photosynthesize, they pull carbon dioxide out of the water.

However, extremely high phosphorus concentrations suppress whiting events. High phosphorus may explain why no laminations are evident in the Lake Mendota sediment core from 1885 to 1980, a period of intense agriculture and urbanization. Efforts to divert the direct disposal of sewage — which, like agricultural runoff, is rich in phosphorus — from the lake have reduced phosphorus concentrations since the 1970s and 1980s, possibly explaining the reemergence of whiting laminations in the sediments.

Beginning in 2008, though, the sediment shows an uptick in laminations. This change is likely due to an increase in the algae blooms that trigger whiting events. More algae blooms are likely related to extreme rain events (e.g., flooding in June 2008) that carry massive amounts of nutrients into the lake and the spiny water flea (Bythotrephes longimanus), a roughly half-inch-long invasive predator discovered in Lake Mendota in 2009.

Spiny water fleas feed on native algae-grazing zooplankton called Daphnia. Recently, the spiny water flea caused a nearly 3-foot decline in the lake's water clarity, which was largely because there were fewer Daphnia to control the blooms of non-toxic algae. (Meanwhile, efforts to improve spiny water flea monitoring that were developed in Lake Mendota are geared toward helping slow its spread and impacts in Wisconsin.)

In spring 2010, Daphnia populations were reeling from extremely high densities of predatory spiny water flea during the previous fall. It led to one of the largest spring algae blooms in Lake Mendota since 1995, creating the most favorable seasonal conditions on record for a whiting event. Immediately after the bloom, phosphorus concentrations fell by 65%, and they haven't returned to 1995-2009 conditions since.

Implications for water quality in Wisconsin

Of course, outside of declining nutrient concentrations since 2010, Madisonians have seen little improvement in the water quality of Lake Mendota over the past two decades. In particular, direct measures of nutrient runoff from farms haven't changed significantly over that span despite increasing effort to keep manure on farm fields. So, while the sediments suggest that the lake may be changing for the better, reflecting pre-settlement conditions, reducing manure runoff is necessary to reduce the overall nutrient load in the lakes.

While the ooze at the bottom of Lake Mendota is often overlooked as smelly and unsightly — after all, it is not far removed ecologically from having been cow manure — it is bolstering long-term ecological research on the lake. In doing so, this sediment has revealed a potential new control on the lake's water quality hidden within itself.

That is, communities might be able to leverage calcite precipitation to control water quality, not just on Lake Mendota, but in many of the lakes in southern Wisconsin marked by similar agricultural, limestone-rich watersheds. While reducing agricultural runoff remains the most effective path to protecting freshwater resources, managing this diffuse, non-point source pollution is challenging. Understanding other pathways to improve water quality such as calcite precipitation could allow natural resource managers to improve water quality at the margins despite incremental reductions in runoff.

If ooze can continuously archive ecological activity in lakes, while simultaneously improving their water quality, communities around them would benefit from continuing research, no matter how unappealing it might be.