Why Homegrown Garlic Is Best Planted In Autumn 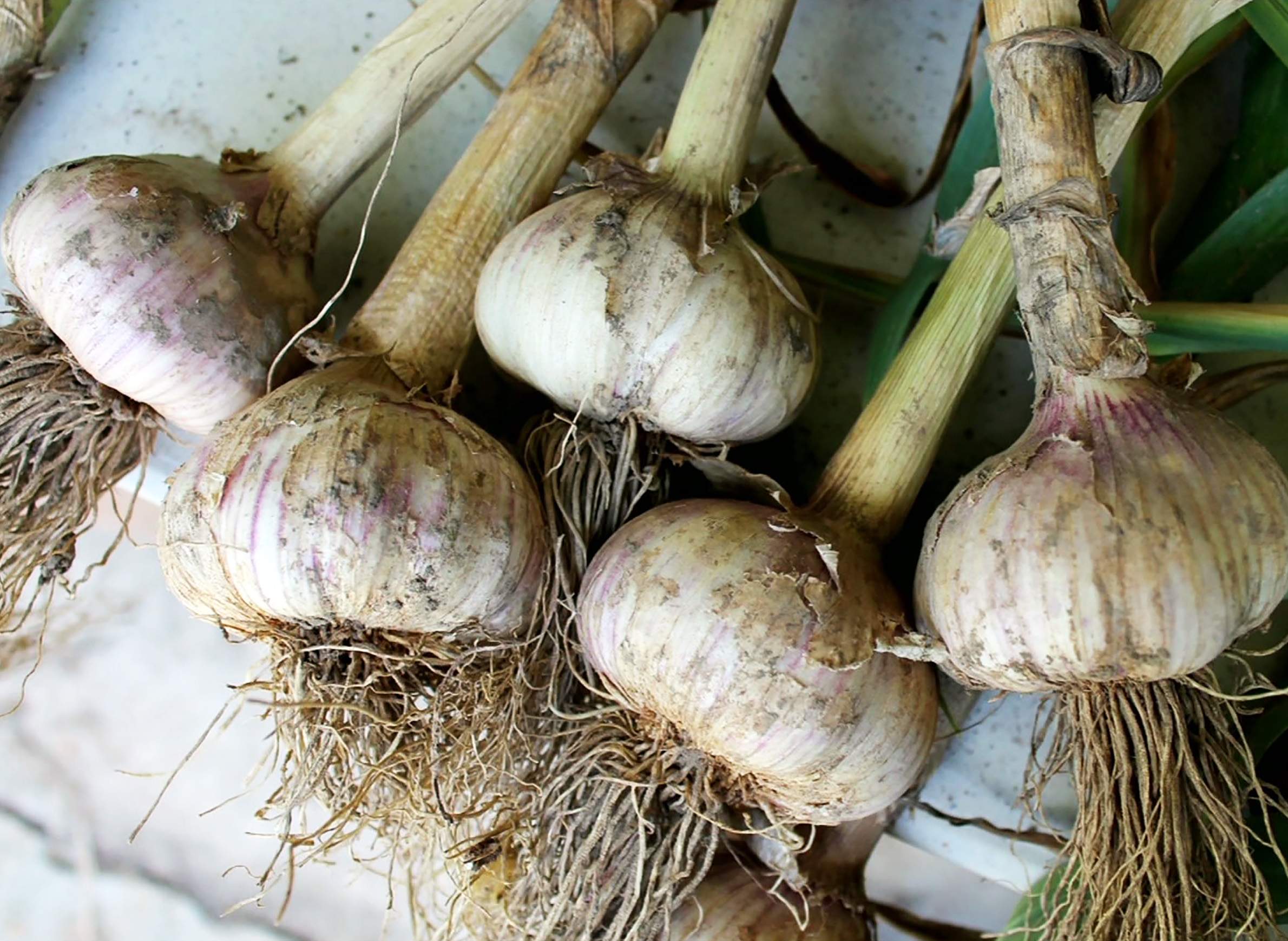 When most of Wisconsin's farmers are focused on harvesting the season's corn, potatoes and cranberries, some of them — along with a good many home gardeners — are already preparing to plant one crop that won't be ready to pick until the following summer: garlic.

October is the ideal time to plant garlic in Wisconsin, so long as growers properly prepare their newly-planted cloves for a long, cold winter. There are a few more considerations to make that will help ensure a bountiful garlic harvest in the next year, but overall, the pungent bulb is simple to cultivate.

"It's one of the easiest crops to grow in the garden," said Noel Valdes, who owns a Cobrahead, a garden supply company in Cambridge. Valdes was sharing tips for garlic production in a Feb. 10, 2018 talk at the Wisconsin Garden and Landscape Expo, recorded for Wisconsin Public Television's University Place.

After decades of experience growing his own garlic, here's how Valdes recommended planting, growing and harvesting garlic in Wisconsin.

Hardneck garlic tends to pack more intense flavor, but doesn’t store as well as softneck varieties. For that reason, most garlic sold in grocery stores are softneck varieties. Planting cloves from store-bought garlic can work well, though planting cloves from non-organic garlic may not work out because it may have been treated in a way that can stunt its growth in the garden.

Another difference between hardneck and softneck varieties? Hardneck garlic will always produce a scape: the long, curly stems of garlic plants at the end of which seed pods form. If softneck garlic produces a scape it usually means the plant is stressed.

The most important consideration for planting is to ensure that garlic cloves go into the ground in the fall and that the garden beds subsequently receive an ample supply of insulating mulch. (Cloves are the individual parts of a bulb that will themselves grow into a new bulb.) Mulching with about six inches of straw is recommended, though crushed leaves and hay also work. While gardeners in Wisconsin may eke out a crop if they wait to plant until early spring, the bulbs won’t have time to fully develop during the upper Midwest's relatively short growing season without an autumn kickstart.

Besides a timely planting — ideally sometime between late October and mid-November — gardeners should make sure they're sowing healthy cloves that are large, firm and still wrapped in their naturally protective papery shell. (These cloves are sometimes called seeds, though garlic plants also produce actual seeds with which gardeners need not bother.) They're planted by pressing them into the top of a ridge of loosened, loamy, well-draining soil until the tip is flush with the soil surface. Planting the cloves at the top of a small ridge of soil helps ensure they won’t get what’s called "wet feet" and rot. 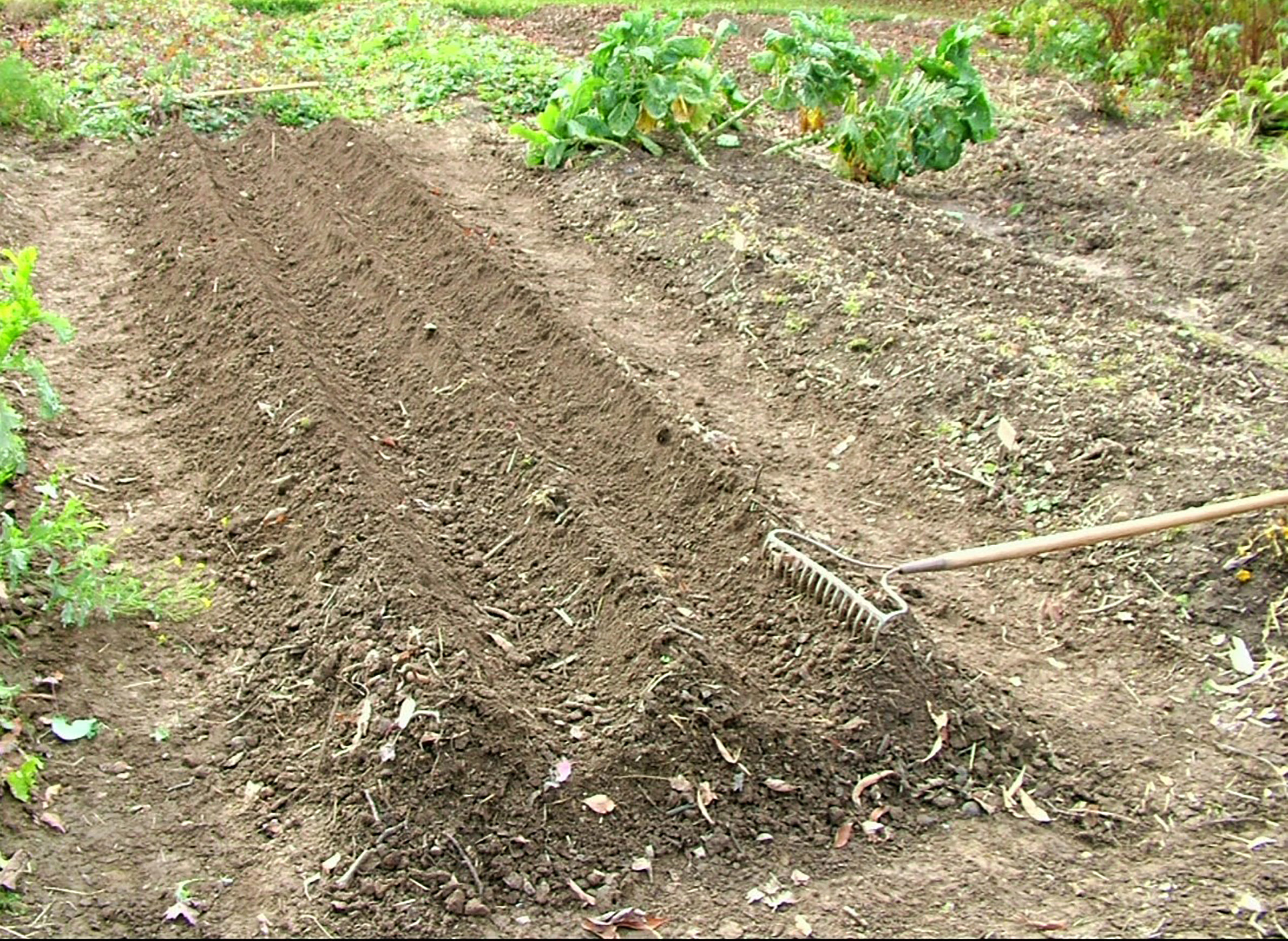 Noel Valdes/Cobrahead
A garden bed prepared for fall planting of garlic. Individual cloves should be placed about 6 inches apart along the ridge tops.

Cloves of typical garlic varieties should be planted about six inches apart. Large varieties, like elephant garlic (which is actually a variety of garden leek) should be spaced about 9 inches apart, while miniature varieties can be packed in at a spacing as little as 4 inches.

Garlic planted in the fall will be one of the first plants to send up green shoots in the spring, with stems forming as early as March.

New garlic shoots will be some of the first green in the garden during spring. The new growth will pop through insulating mulch as early as March in Wisconsin. 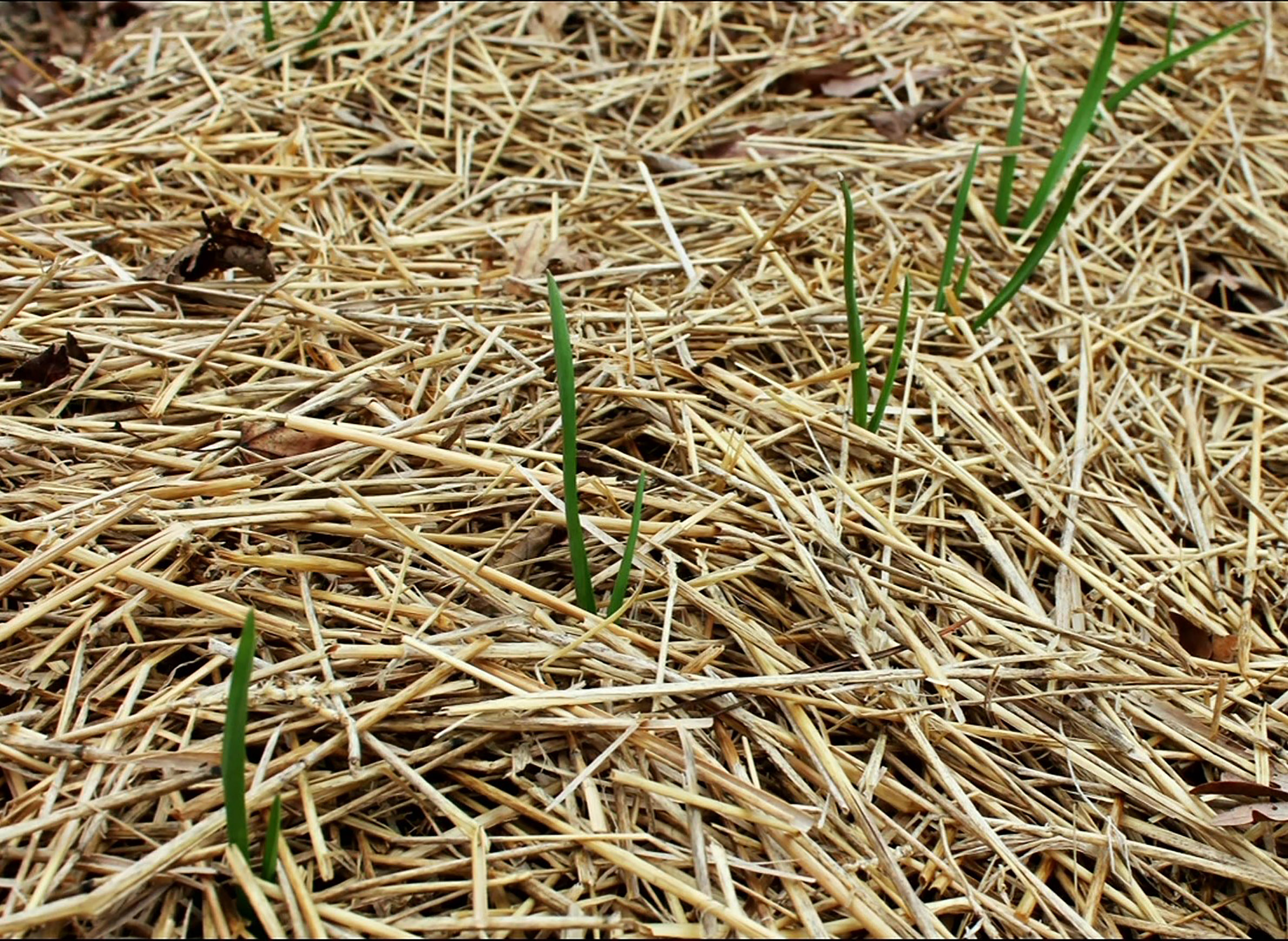 Garlic plants generally do not require very much care, and can easily be interplanted with other produce that won’t shade them out, such as lettuce or cilantro. They are, however, sensitive to weeds, especially grasses and other weeds that shade them out or crowd out their bulbs.

It's helpful to remove scapes before the formation of a seed pod to ensure that the plant's energy is directed toward the bulb. Softneck varieties will only grow scapes if they are stressed, which shouldn't occur in rich, well-draining soils during an average growing season.

Additionally, garlic plants do well without irrigation, and should only require watering during drought.

Cloves planted in the fall should be ready to harvest around mid-July, though it's a good idea to dig a bit around the partially exposed bulbs to make sure they're mature before harvesting.

A garlic bulb that’s ready to harvest is one that has taken the typical bulbous form of garlic and has developed a full cover of intact papery skin. Underdeveloped bulbs appear rounder, like an onion, while overripe ones are easy to tell by their split skins. Bulbs should be harvested by gently digging them out from underneath with a pitchfork. Pulling them from above can damage their sensitive stalks and make them less storable. 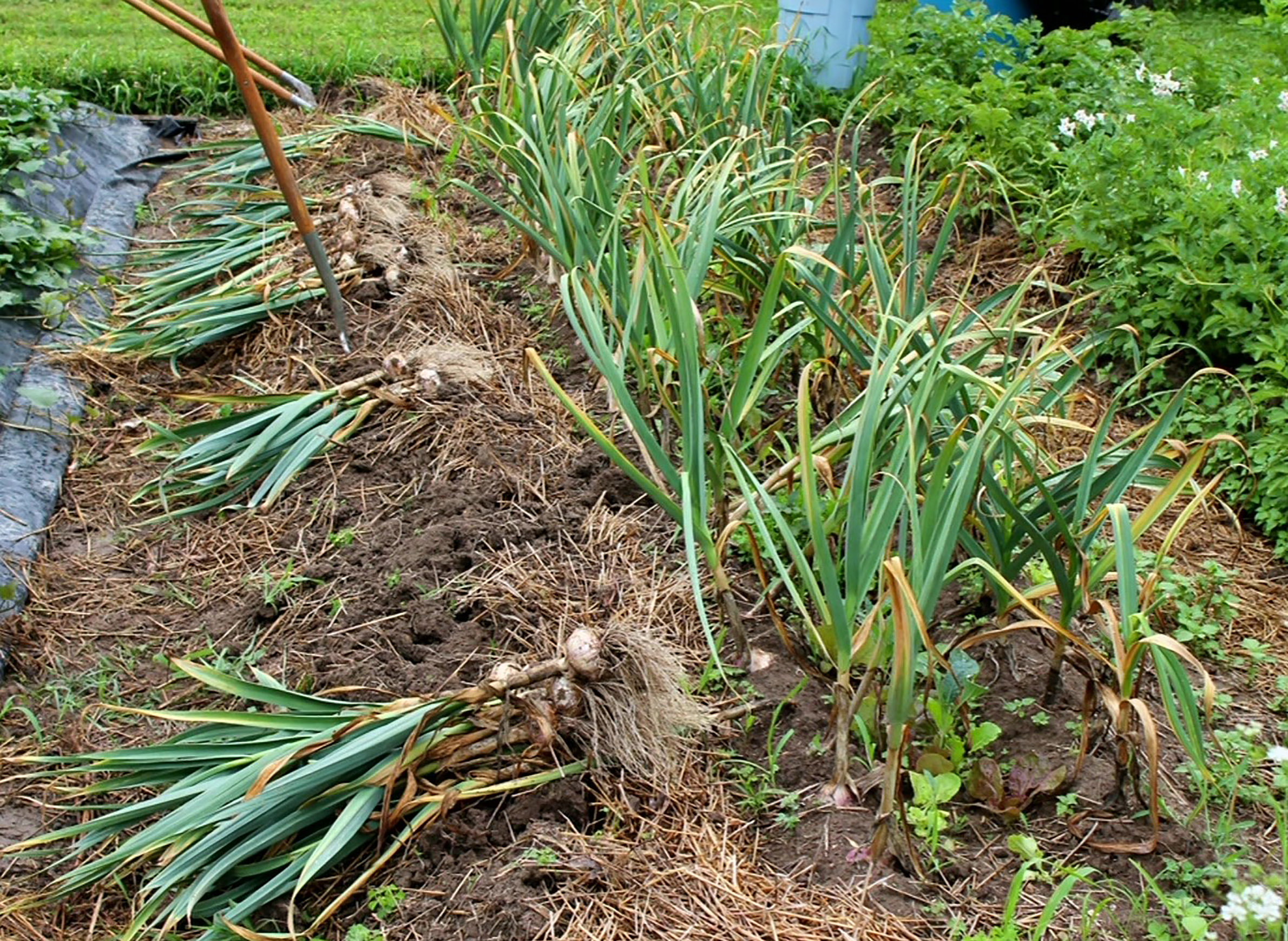 Noel Valdes/Cobrahead
The best way to harvest garlic is by gently working the soil beneath the bulbs with a pitchfork. Do not pull the plants, as it can damage the neck above the bulb, which may mean it won't store as long. Here, garlic plants can be seen interplanted with lettuce.

Harvesting the bulbs after several dry days is preferrable, if possible, since dry bulbs store better. Harvested bulbs should not be washed unless they're already wet and muddy — simply brush off excess dirt and let them air dry at room temperature. A garage works well, or a basement, though long stretches of high humidity can be detrimental to storage. Dried bulbs will keep at room temperature and low humidity for up to nine months.

Brush excess dirt from bulbs and let them air dry following harvest. Do not wash the bulbs unless you are forced to harvest them during wet and muddy conditions. 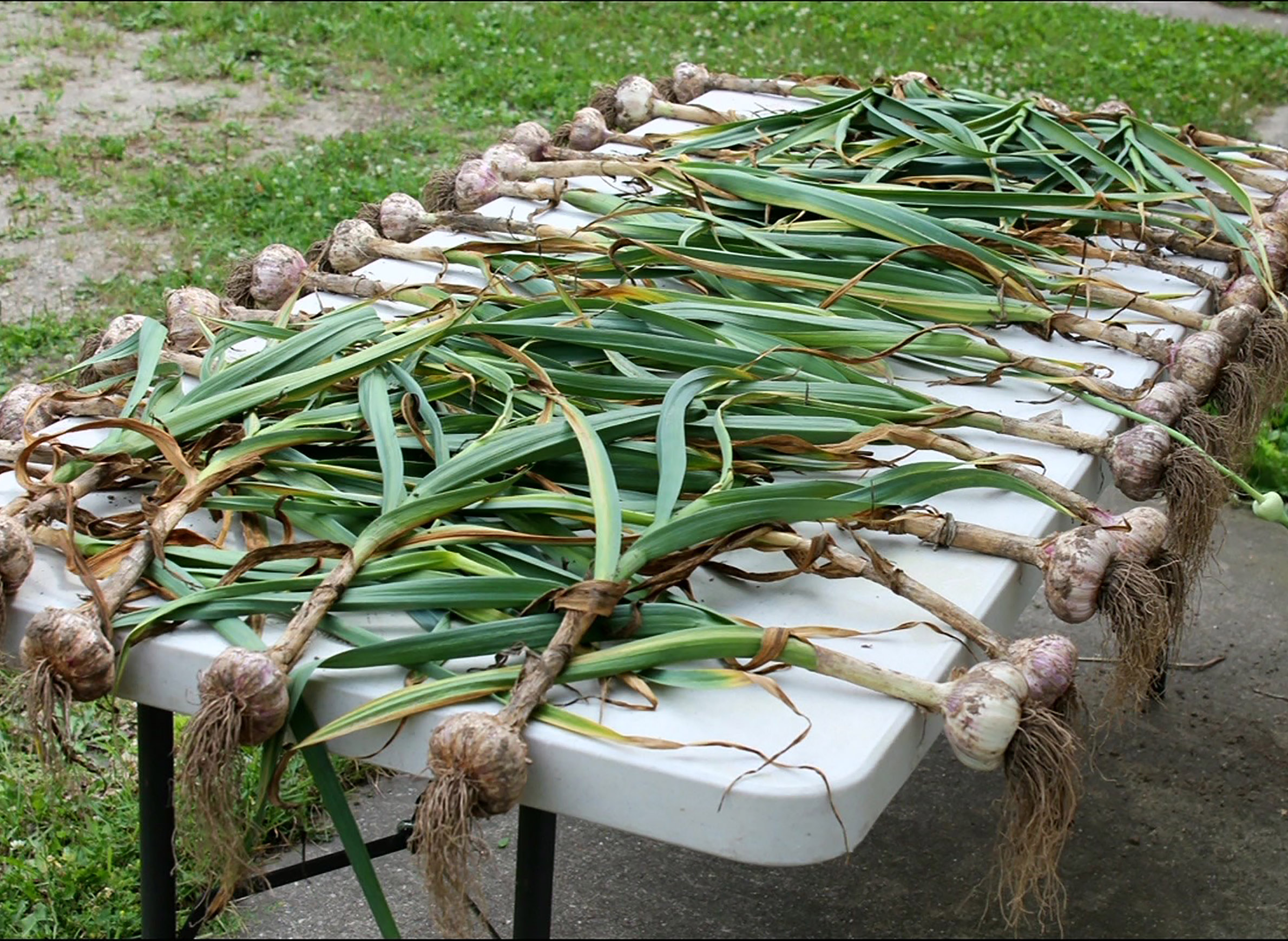 Finally, to renew the cycle, the largest and healthiest looking bulbs are best saved for planting again come October.

"You want the best variety, the strongest, the biggest," Valdez said. "So, always plant your best seeds. Eat the smaller ones."