Why Kewaunee County Is A Flashpoint For CAFOs And Water Quality 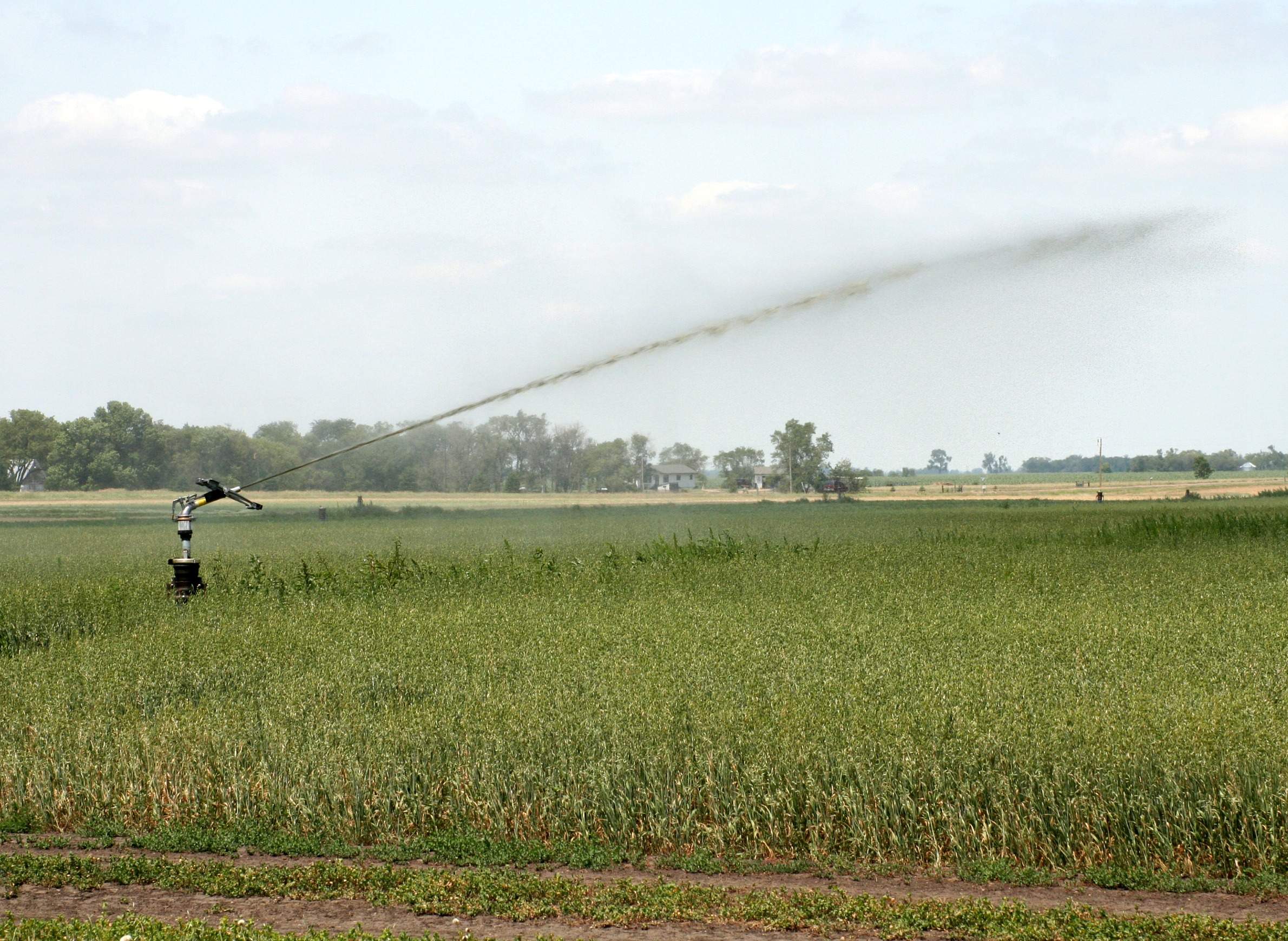 A manure spraying demonstration on a research farm in South Dakota.

Kewaunee County, home to about 20,000 people on the lower half of the Door Peninsula, is hardly the only place in Wisconsin that's seen a rapid growth of concentrated animal feeding operations (CAFOs). Nor is it the only area in the state where there are problems with bacteria and nitrate contamination in its drinking water. The county has, however, become central to a debate over how to regulate manure irrigation, an increasingly used process in which farms spray liquefied animal waste to fertilize fields.

A state-commissioned report issued in April did not yield consensus on the issue among a working group of academics, state regulators, county-level health officials, farmers and ag industry representatives. In late June, the Wisconsin Department of Natural Resources-facilitated Groundwater Collaboration Workgroup — focusing on Brown, Door and Kewaunee counties and comprised of local residents, state and county officials, and farmers — issued another report making several recommendations for aiding residents with contaminated drinking water and minimizing the impacts of manure irrigation. In the wake of that report, Kewaunee County residents are continuing to call upon the DNR and U.S. Environmental Protection Agency to open the door for emergency water supplies for people whose wells have been compromised, and for large dairy operators to do more to reduce pollution. People working on these issues in northeastern Wisconsin hope to create guidance that can be used to help communities across the state navigate them.

It makes sense that Kewaunee County residents might feel especially vulnerable to bacterial pollution of its drinking water.

DNR records show the county has 16 CAFOs operating within its 343 square miles — a high count even compared to other rural, agriculture-intensive counties around the state. Despite being along the shores of Lake Michigan, Kewaunee County households and businesses depend almost entirely upon groundwater sources for their drinking water needs. Less than half of its residents get their water from public utilities, which can carry out treatment processes like disinfection to address bacterial contamination. Rather, most people draw their drinking water from private wells. These sources are largely unregulated, and property owners must monitor for and treat any contaminants on their own. Finally, a lot of this groundwater is under relatively thin soil and bedrock with lots of cracks in it, a type of geologic formation known as karst. This foundation can make it easier for bacterial contaminants to seep in not only from farms, but from leaking septic systems as well.

"Mostly just the karst features allow direct infiltrations of things from the surface to reach groundwater there," said Rebecca Larson, a University of Wisconsin-Madison professor of biological systems engineering and UW-Extension specialist. Larson pointed out that this issue is not limited to CAFOs — large farms cannot spread manure in areas where the depth to groundwater is less than two feet (still relatively quite shallow), but smaller farms have no such restrictions.

"We have definitely outlined that there are areas where the sensitive features are, and some of those lands are still receiving manure," she said.

Monitoring data collected by state agencies provides some geographic perspective on water contamination in Kewaunee County, especially those related to mounting concerns over bacteria and viruses. The Wisconsin Well Water Quality Viewer, developed by the Center for Watershed Science and Education at the University of Wisconsin-Stevens Point, provides geographic data on bacterial contamination findings, based on tests sampling for E. coli and other coliform bacteria. This information presents results by small geographic units, called "sections." Most of these data are based on just a small number of samples — if, say, two of four samples in a given geographic area tested positive for E. coli, that would land it in the most contaminated category.

The following map shows the location and intensity of groundwater bacteria tests across Kewaunee County. Some clusters highlight where bacteria seems to be especially prominent in groundwater, particularly in northern and western parts of the county. Many of the high-indicator areas are also located near CAFOs, though these facilities are spread throughout the county.

Scott Gordon/WisContext
A map of Kewaunee County indicates the location of bacterial contamination in well water test samples and the sites of concentrated animal feeding operations.

Another important factor are those layers of soil and the cracked geology beneath them. A map in the Groundwater Collaboration Workgroup report, drawn from a 1987 DNR survey, shows that Kewaunee County's bedrock is shallower in wide swaths of its northern, western, and southwestern portions. These areas are also where well testing data show the higher instances of bacteria. 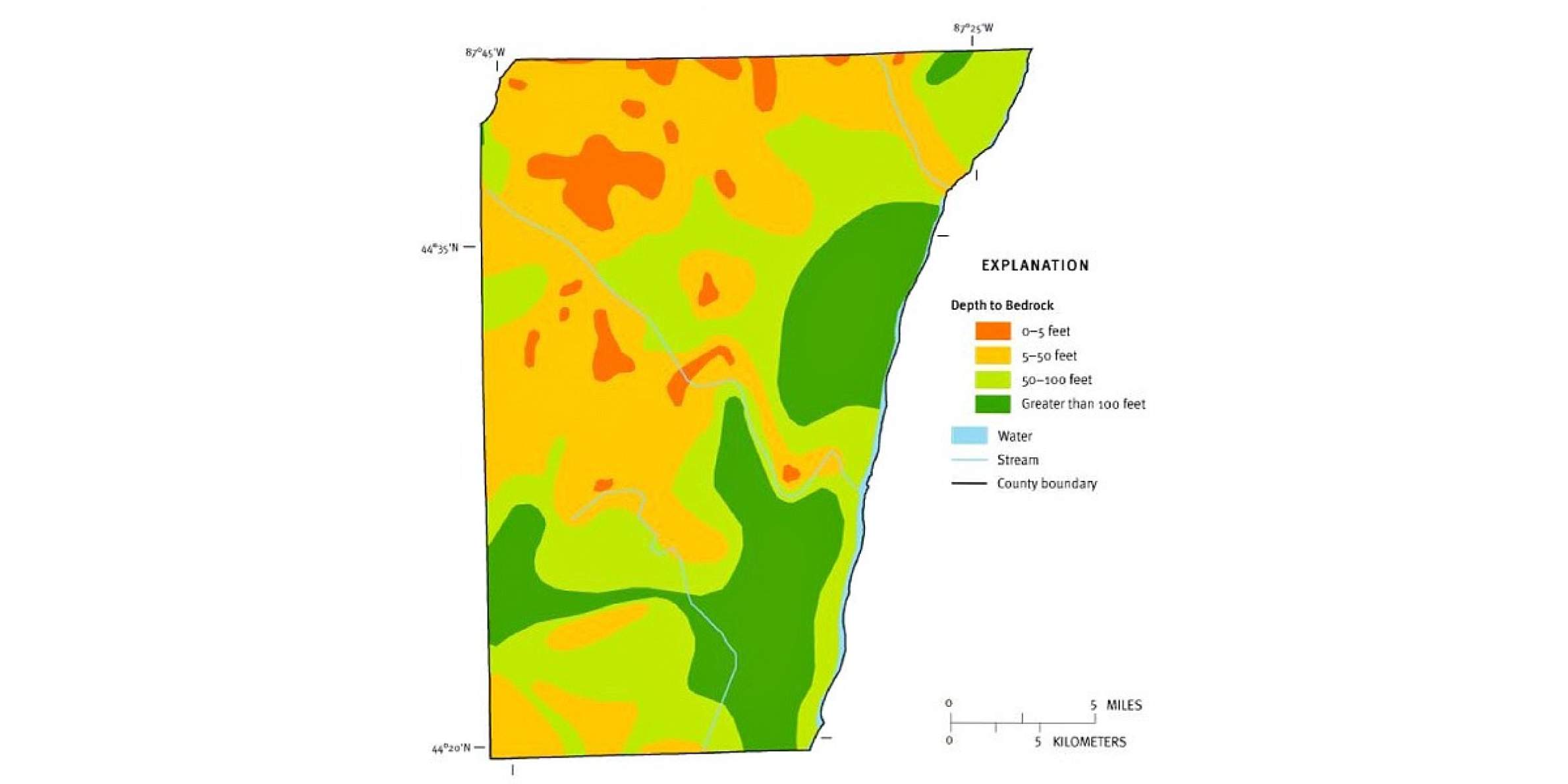 Wisconsin Department of Natural Resources
Portions of Kewaunee County have relatively shallow soil, which makes groundwater more susceptible to contamination from above.

How much bacterial contamination comes from animal waste and how much comes from human waste is an open question, said U.S. Department of Agriculture microbiologist Mark Borchardt, who has conducted extensive research on groundwater contamination in Wisconsin. He is currently leading a DNR-sanctioned study that aims to fill gaps in what scientists and regulators know about water pollution and its sources in Kewaunee County. This study's testing will be more extensive and randomized than previous rounds of sampling in the area, and will focus on distinguishing between human and animal fecal contamination.

For one, the pathogens identified so far in Kewaunee County groundwater are types found in both human and animal feces, making it difficult to pinpoint contamination sources or determine how these bacteria and viruses are traveling. Despite his concerns, Borchardt is optimistic that the discussion in northeastern Wisconsin will help the state develop better overall approaches to protect its groundwater, in part because the area provides such a complex challenge.

Larson hopes the current research and debate leads to some immediate changes in northeastern Wisconsin, like getting more farms to adopt nutrient-management plans and treat their manure for pathogens. And what works there won't always work in every part of the state.

"The site-specific condition will dictate what kind of rules should be implemented," Larson said. "Although in this area we have some sensitive features, in areas where that's not the case, we need to be careful that we may be adding regulations that are unnecessary, and they may need regulation in different ways."

Whatever the local conditions, Larson sees at least one lesson emerging that all farming communities across Wisconsin can take to heart: Plan ahead, before there's a water-quality crisis.