Why The Number And Location Of Lead Water Pipes Are Elusive 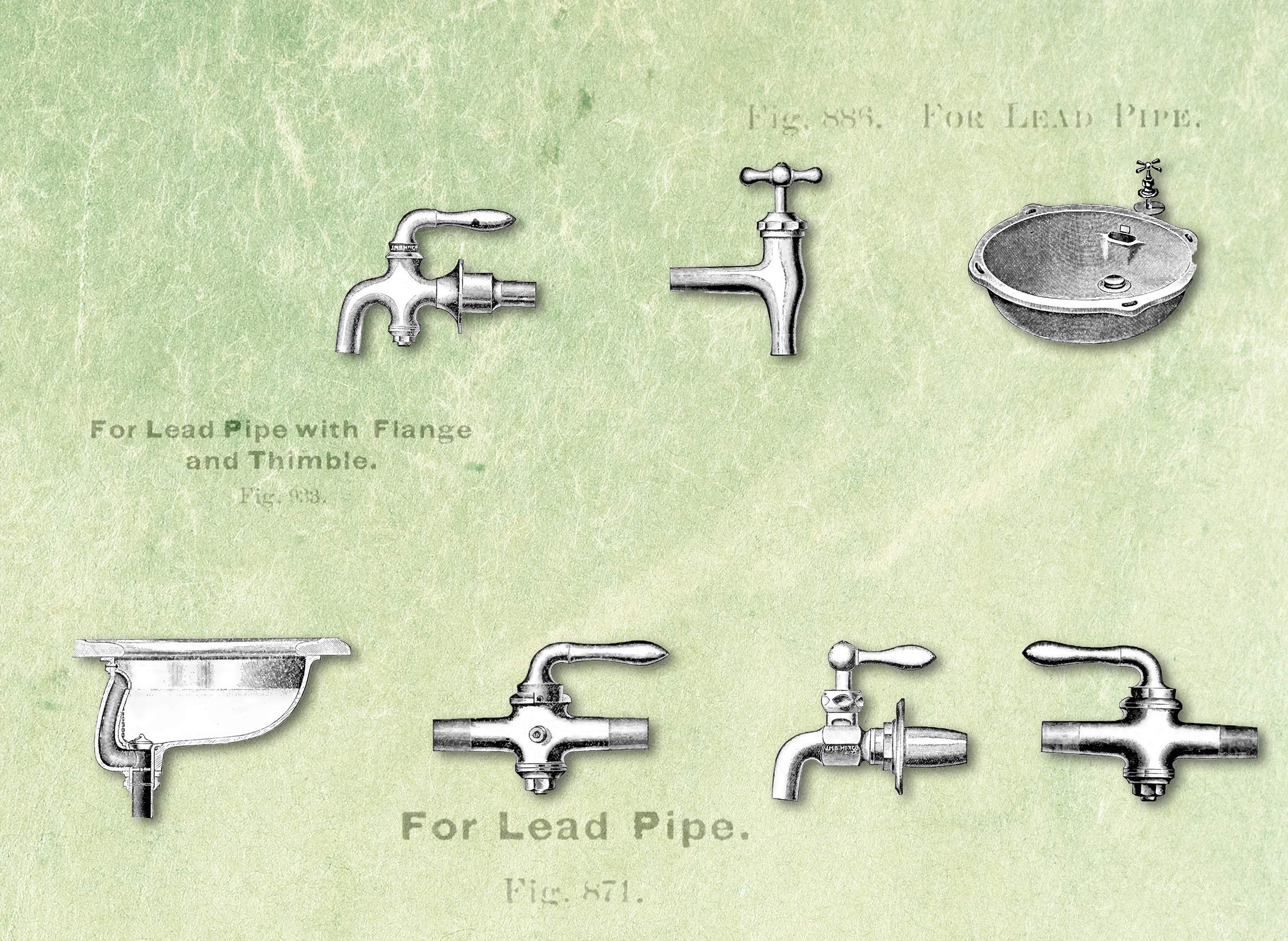 Items from a plumbing catalog published in 1895 demonstrate how lead water pipes were once commonplace.

No one can say for sure how many lead pipes drinking water runs through on a daily basis around the United States, or where specifically those pipes are located. The Environmental Protection Agency does not know, nor do state-level regulatory agencies like the Wisconsin Department of Natural Resources and Wisconsin Public Service Commission, and even local water utilities are usually not certain about this infrastructure.

Lead contamination in drinking water has taken on prominence as a public issue over the last year in light of the lead crisis in Flint, Michigan. As a result, states and individual communities around the nation, including in Wisconsin, are seeking to get rid of more lead pipes used by water utilities to service homes, schools, businesses and other buildings. These efforts face multiple obstacles, but one stands out in terms of simply understanding the problem: Lead pipes and their location have never been thoroughly accounted for in most places.

Before Congress banned the installation of new lead water utility pipes in 1986, local governments or other entities weren't keeping comprehensive records of their use. Individual plumbers and water utilities may have kept tabs — often in paper records that have never been digitized — but that information wasn't collected in any kind of central database at the national level.

One reason for this gap is not everyone considered the use or locations of lead pipes as something worth tracking. Some cities began banning these pipes as early as the late 19th century, but even that didn't create a consensus that their use was a public health threat — thanks in part to lobbying and messaging on the part of the lead industry's trade organization. Moreover, people living in cities had been accustomed to using lead water pipes for a very long time — they date back to ancient Rome. (Lead is a very malleable metal, so it was long considered a handy material for pipes that might have to twist and turn a bit to serve a given location.)

Another big hitch with knowing where lead pipes are located is that people who work with water utilities have a particular way of defining and dividing which infrastructure is in which place. Most of the lead pipes in use are not the mains — the big conduits that form the skeleton of a given system and from which others branch off to end users. These final portions are service lines, which run from utility-owned mains to specific buildings To further complicate things, often a lead service line is owned in two sections: One by the utility and the other by the individual property owner.

This ownership division creates a lot of difficulties for projects replacing lead pipes. For instance, Wisconsin water utilities can't use ratepayer money to replace the user's end of a lead service line. That's why a new DNR program that helps fund lead pipe replacement focuses on that portion the lines. Some utilities have gotten around this with creative financing and cost-sharing. Madison's water utility funded its historic, $15 million replacement project with the money it made leasing its land out for cell towers. Green Bay is using excess money from the now expired Lambeau Field sales tax to replace lead pipes in about 1,700 homes.

How lead service lines are replaced is an issue as well. Replacing just one section of a service line can even make lead contamination worst, by disturbing old lead rust or, when a lead pipe is connected to a new copper pipe, creating an electrochemical effect that draws more lead into the water. That's just one way that utilities can exacerbate corrosion, the most common way that lead makes its way into people's drinking water.

The official division between the utilities' and property owners' portions of service lines also complicates record-keeping. In Wisconsin, a utility only has to track its own lines, with that information in turn collected by state regulators. Each public water utility in the state submits an annual report to the Public Service Commission, which includes information about the materials they're currently using. In these reports, utilities are required to report lead pipes they own, but not those on individual customers' property.

It's possible for a community to have hundreds or even thousands of lead service lines that are not documented by state regulators. It's not just an issue in theory: The city of Sheboygan serves an estimated 6,000 customers with lead service lines, but there is no mention of lead pipes in the Sheboygan Water Utility's 2015 annual report. This is because, in another odd twist, Sheboygan’s utility treats the entirety of each lead service line as private property, and thus doesn't report them to the PSC.

In 2013, the Environmental Protection Agency's Chicago field office drew on these incomplete PSC reports to piece together an estimate of how many lead pipes exist in Wisconsin. It found 176,754 lead service lines in 113 communities.

Miguel del Toral, an EPA regulations manager, told the Wisconsin Center for Investigative Journalism that he ran into a lack of institutional knowledge in the course of piecing together this count.

EPA officials have acknowledged that the estimate is flawed due to these record-keeping practices: "Please note that we have not verified the information contained in those reports, and utility records are often incomplete and can also contain errors," EPA spokesperson Anne Rowan said in a recent email.

The water utility industry as a whole has acknowledged the uncertainties in tracking down lead pipes. A March 2016 report from the American Water Works Association indicates that lead service lines still in use could number anywhere between 5.5 and 7.1 million — a pretty big margin of difference. An estimated 3.4 million of those, the report noted, are in the Midwest.