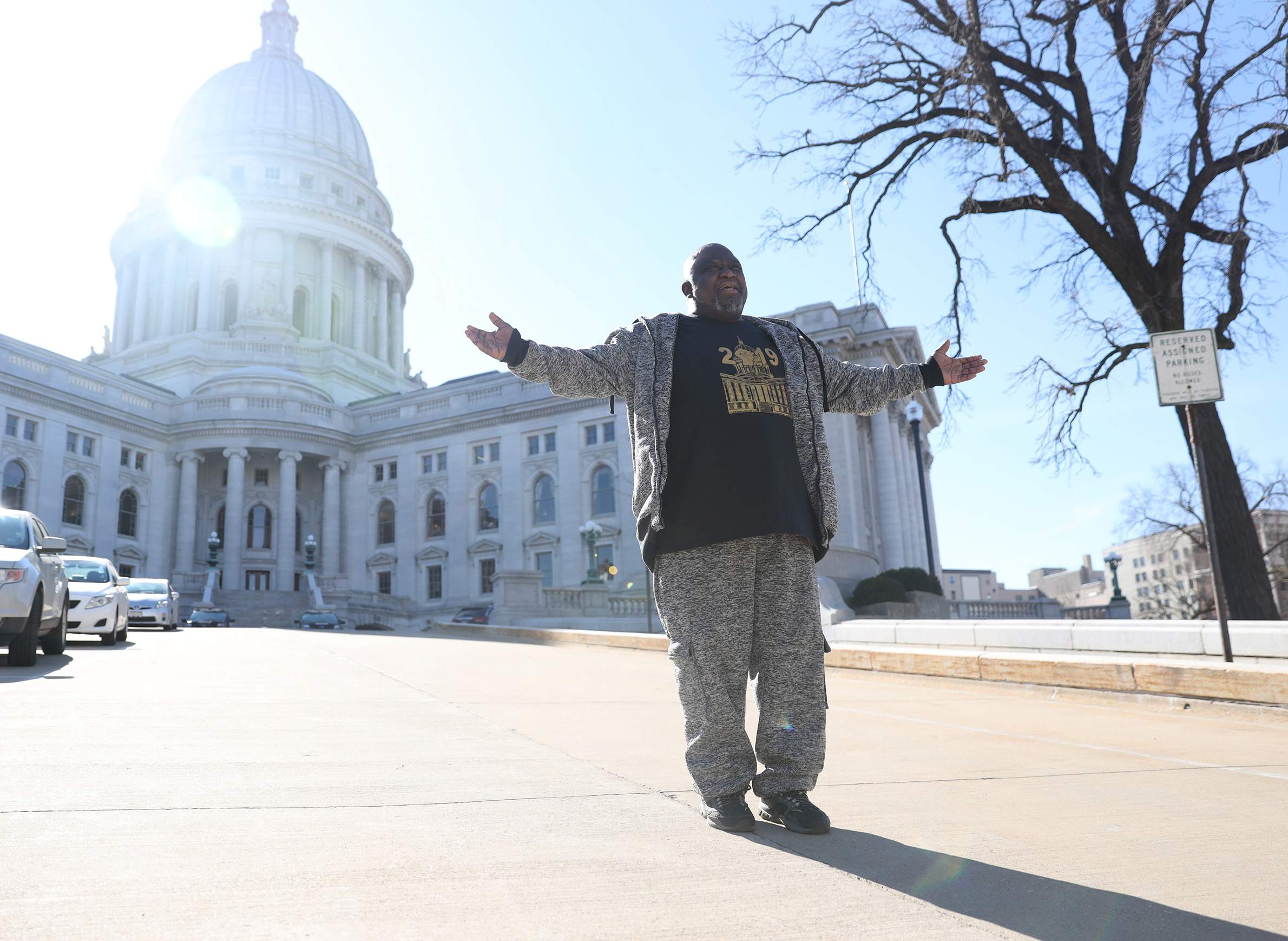 Emily Hamer/Wisconsin Watch
Former prisoner Sylvester Jackson says he is constantly worried about violating terms of his extended supervision. "I go day by day, but it's always in the back of my mind that I can lose everything without even committing a new crime." So-called crimeless revocations now account for 40% of new admissions in the Wisconsin prison system. Gov. Tony Evers says he wants to end the practice of reincarcerating offenders for rule violations. Photo taken March 26, 2019, at the Wisconsin State Capitol in Madison.

Revocations for rule violations — and not the commission of new crimes — is the No. 1 cause of incarceration in Wisconsin, accounting for 40% of new admissions, Wisconsin Department of Corrections figures show.

Gov. Tony Evers, who is aiming for sharp reductions in the state's prison population, said he wants to end these so-called crimeless revocations.

The proportion of offenders reincarcerated for violating rules while on community supervision in Wisconsin has risen quickly. Such revocations made up 31% and 34% of new prison admissions in 2016 and 2017, respectively.

Nationally, 25% of prison admissions are due to rule violations, according to a June 2019 report released by the Council of State Governments Justice Center.

Wisconsin is one of 13 states where more than one in three people in prison are there for a supervision violation, the Justice Center found. The state is ranked third in the country for how long people are supervised, according to a January 2019 report from Columbia University's Justice Lab.

The typical supervision length in Wisconsin is 3 years and 2 months — almost double the national average.

In July 2018, while running for governor, Evers said the Milwaukee Secure Detention Facility — the first facility in the United States built to incarcerate individuals who violate community supervision — needs to be closed "as soon as possible." Evers' budget, however, recommends putting $8.1 million into remodeling the facility, with a focus on improving the ventilation.

According to the DOC, as of April 30, there were 66,215 adults in Wisconsin either on probation or parole. This is 5,000 more people on community supervision than in Alaska, Maine, Montana, New Hampshire, North Dakota, South Dakota, Vermont and Wyoming combined, as of 2016, according to the American Civil Liberties Union Blueprint for Smart Justice report.

There are three main ways supervision can be revoked: a new sentence for a new crime; a revocation plus a new sentence; or a rule violation, which inmate advocates often refer to as a "crimeless revocation."

Unlike parole, offenders who violate rules can be sent back to prison to serve the entire period of extended supervision, former Wisconsin Policy Forum spokesperson David Callender said. In an October 2018 report the group, which researches and advocates for efficiencies in state and local government, analyzed the numbers behind the state's prison admissions.

"Let's say you have three years on extended supervision. If on the very last day you commit an offense and have to go back to prison, you could potentially go back for that entire three years" Callender said. "Generally, the longer that somebody is looking over your shoulder and the longer you're under supervision, the more likely it is that you may do something wrong and end up back in prison."

The revocation system is "ripe for reform," said Rep. Evan Goyke, D-Milwaukee, a member of the Assembly Corrections Committee.

Wisconsin lost the opportunity to have the Pew Charitable Trusts study its community supervision system an objection from Assembly Speaker Robin Vos, R-Rochester, citing perceived bias in favor of Democrats. But Kevin Carr, who leads the Department of Corrections, said the state is exploring "other alternatives to accomplish that same objective."

"We just have to find out what's worked in other areas and then adapt it to a Wisconsin model that works for us," Carr said. "I believe there are examples from around the country that we can learn lessons from, and we can take those lessons and apply them here and increase the efficacy of what we're doing [with supervision]."

Wisconsin Department of Corrections head Kevin Carr describes various strategies for achieving Gov. Tony Evers' goal of sharply reducing the state's prison population. Wisconsin was among 19 states where prison populations increased in 2018. The system is currently 33 percent above capacity. Carr is seen during an interview with Wisconsin Watch, on June 19, 2019, along with with Makda Fessahaye, administrator for the agency's Division of Adult Institutions. 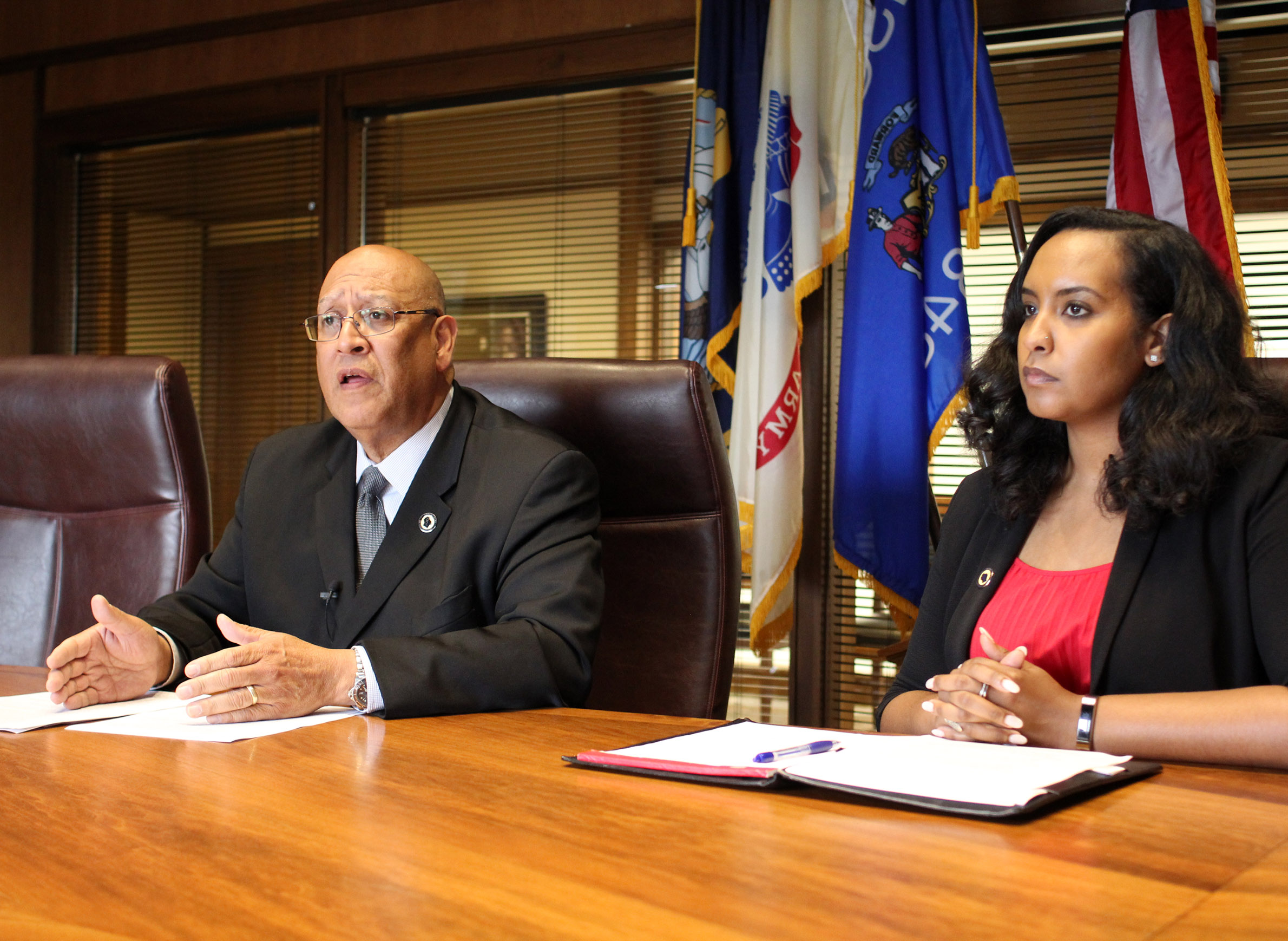 The American Civil Liberties Union estimates that by reducing the amount of time served due to a revocation and reducing revocation admissions there could be 8,275 fewer people in prison by 2025. The ACLU combined both crimeless revocations and people revoked for committing new crimes in their estimate.

Return to prison 'always in the back of my mind'

For Milwaukee resident Sylvester Jackson, who began serving 10 years of extended supervision in April 2017, there is "no normal." Jackson previously served 10 years in prison and is a registered sex offender. He spent more than a month at the Milwaukee Secure Detention Facility for allegedly violating his supervision.

"I have eight years to go [on supervision]," Jackson said. "I go day by day, but it's always in the back of my mind that I can lose everything without even committing a new crime." 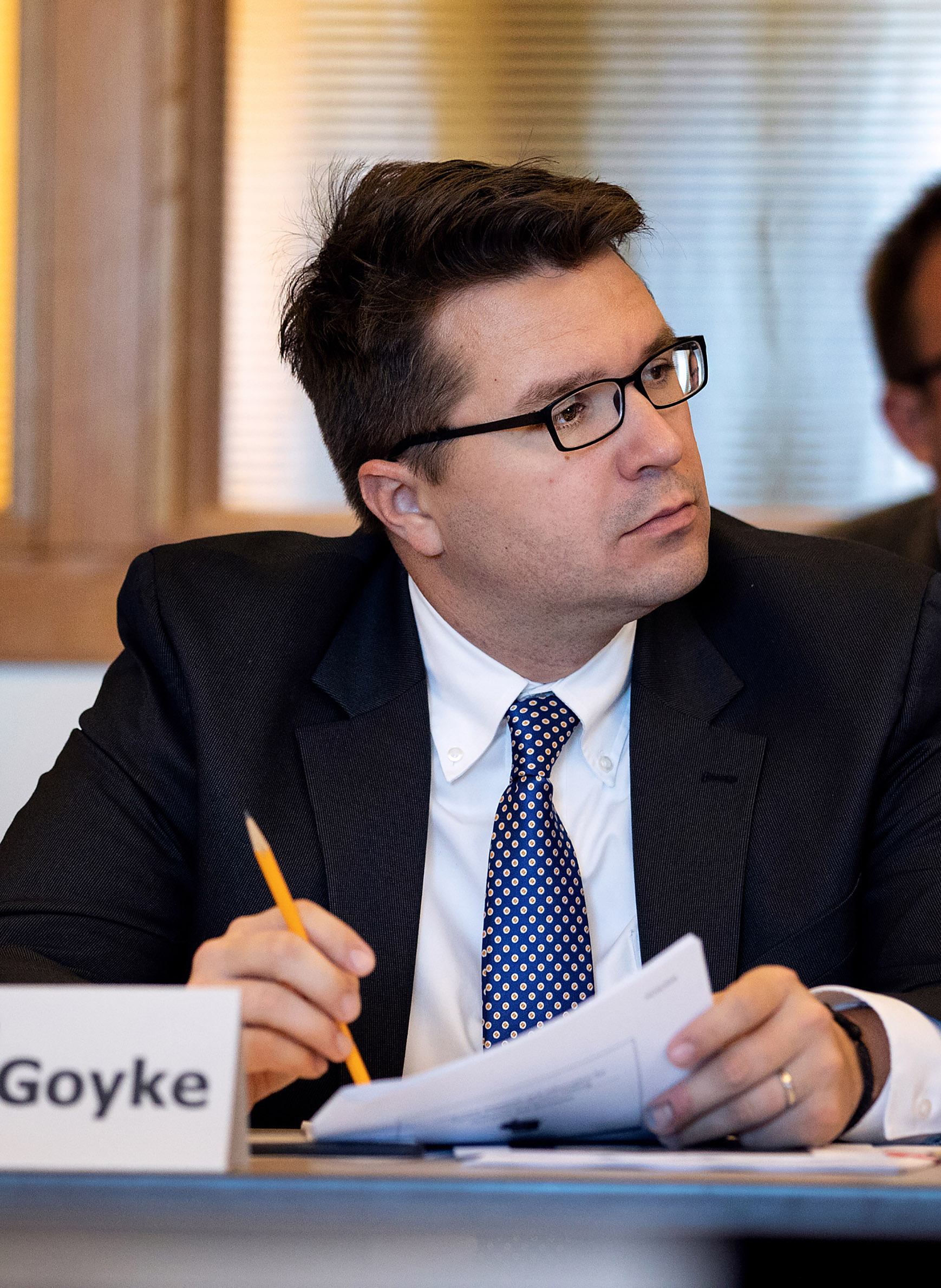 In an interview, Carr said he is willing to consider making changes to the state's supervision rules.

"I'm certainly open to looking at the rules that we have in place for individuals and whether or not those rules are reasonable and whether or not a person should be subjected to revocation for violating a certain category of rules that are not serious," he said. "But then there are rules that a person can violate that I think we would all agree require serious attention and should not be treated lightly."

As someone who was formerly incarcerated and revoked for a rule violation, Caliph Muab'El wants to bring attention to crimeless revocations as a driver of overcrowding in the state prisons, which are currently 33 percent over capacity.

"People are being sent back to prison without having committed a new crime, and this is causing the prison system to stay full and continue to overflow, going against maximum capacity," Muab'El said.

"They're creating space inside of these dormitories … that definitely lead to Eighth Amendment violations — cruel and unusual punishment. There are two beds in the room, and you're telling me you're going to create a third space in a room that's already designed for one person? The reality in that alone is a sense of deprivation. It's cruel and unusual." 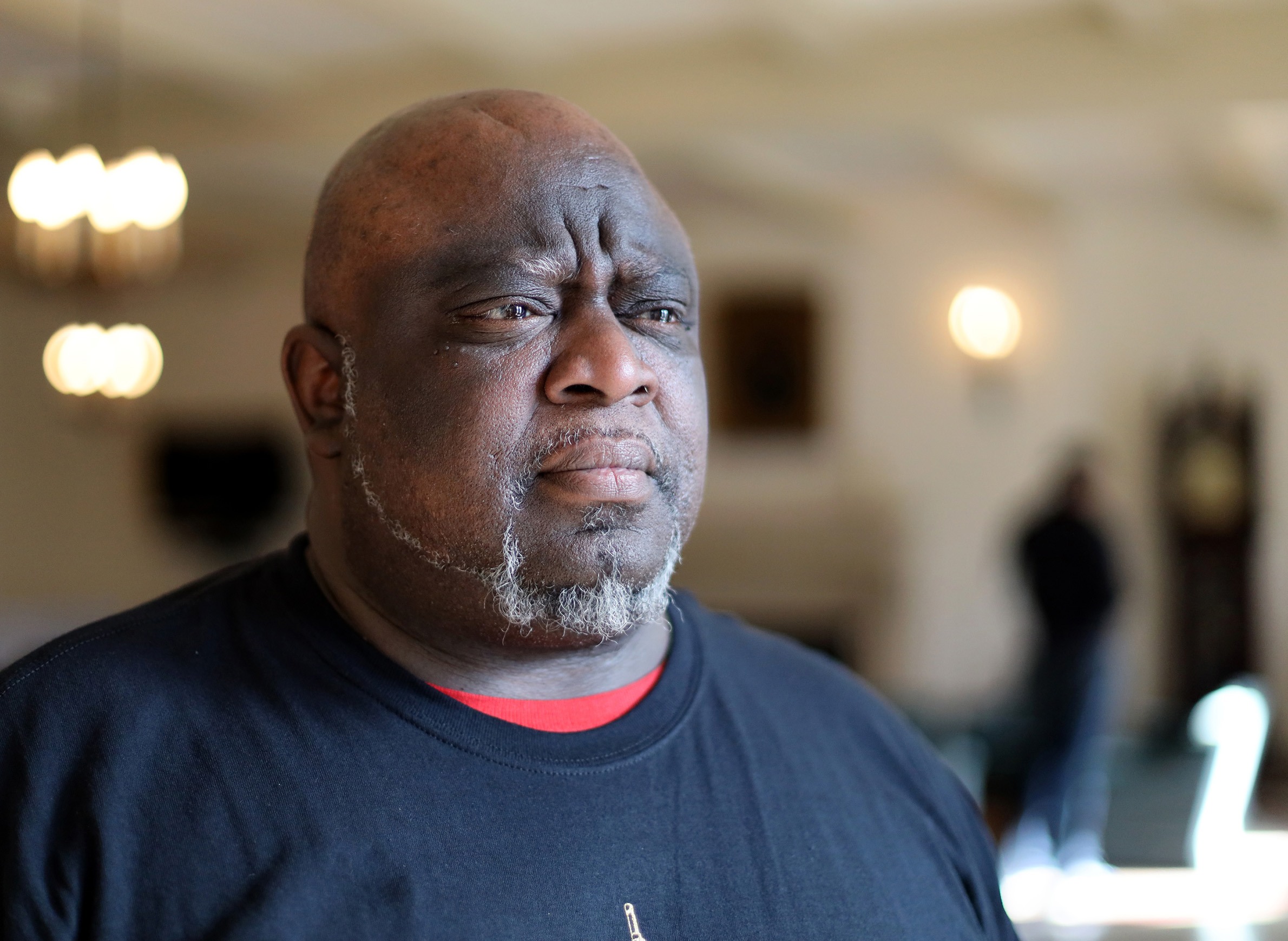 Emily Hamer/Wisconsin Watch
Former prisoner Sylvester Jackson says he has eight years remaining on community supervision. He fears returning to prison even if he commits no new crime. Forty percent of Wisconsin prison admissions are offenders who have not committed new crimes but who are accused of violating rules of supervision. Jackson is seen during the Madison Action Day for Wisdom, the statewide faith-based organization, on March 26, 2019, in Madison.

Jackson feels blacks are being targeted by the extended supervision system. One out of eight black men in Wisconsin is under community supervision, according to the Justice Lab's report.

"It makes you feel very uncomfortable and hopeless unless you've got a strong will and strong mind to fight for change," Jackson said. "I'm willing to fight for a change because it's not right."

There are 18 standard rules of community supervision, according to the DOC. Rep. Michael Schraa, R-Oshkosh, said there are many rules that need to be "revamped." Schraa is the chairman of the Assembly Corrections Committee.

Among the standard rules is reporting all police contact within 72 hours, obtaining a travel permit before leaving Wisconsin and reporting for scheduled and unscheduled appointments.

Sylveter Jackson said these rules are almost impossible to keep track of, especially since probation and parole officers have wide discretion to impose additional restrictions. Sometimes, he said, he was put in jail without explanation. This is something the Justice Lab's report found as well — supervision rules are "extensive, often unclear and can be arbitrarily enforced."

Having to keep track of a set of rules where it is almost impossible to follow them all can lead to chronic stress, said Geoffrey Swain, a professor at the University of Wisconsin-Madison School of Medicine and Public Health, who has studied the health implications of criminal justice policies.

"What happens is people are trying to follow these rules and are worried they're going to break one," Swain said. "When they're extra worried, they're extra vigilant … [and] they're under extra stress. They're more at risk of high blood pressure, diabetes and, ultimately, an early death because they're constantly worried that they're going to be in a situation where someone will say they've broken one of these rules and get sent back to prison."