Why Was A Hudson Midwife Charged Thousands For Using Laughing Gas In Labor? 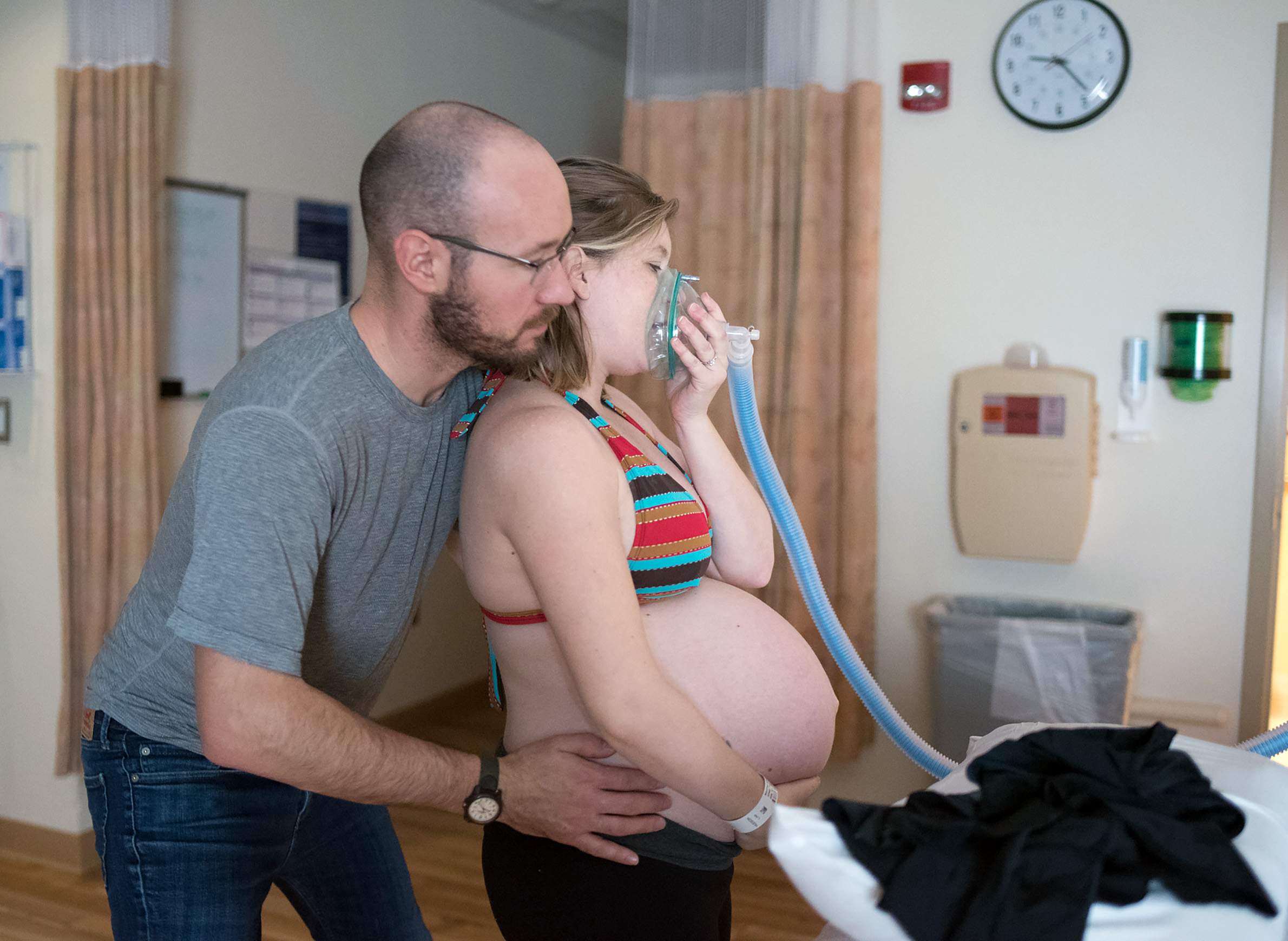 Courtesy of Kara Jo Prestrud, Birth Made Beautiful
Nitrous oxide is used as a noninvasive way to dull labor pain. Patients breathe into a mask to access the gas, which is a mix of 50% nitrous oxide and 50% oxygen, and its resulting euphoric effect.

Nurse-midwife Karli-Rae Kerrschneider wanted the same supportive birth experience she promises her own patients — and that included the use of nitrous oxide, or laughing gas, to dull her discomfort.

The delivery of the gas during labor has come back in vogue in the United States in the past few years as a less invasive alternative to an epidural administered by an anesthesiologist.

With a tank in the hospital room, a woman in labor can take breaths of the gas as she needs it.

"Nitrous doesn't take away the pain so much as make you not care about it," Kerrschneider said, noting its mild euphoric effect

Kerrschneider had an epidural for the birth of her daughter in 2016 and didn't like being immobilized and confined to her bed during labor. For the birth of her son in December 2018, she opted for nitrous oxide at Hudson Hospital in Hudson, located across the St. Croix River from Minnesota on Wisconsin's western border.

The labor was long — 11 hours — but it went just as she'd hoped, with no complications and great care from a nurse-midwife and doula. Being able to take puffs of nitrous was empowering and "took the edge off" as she moved around and hung out in the bathtub during her contractions. She estimated she breathed in the nitrous 10 to 15 times an hour in active labor.

She and her husband, Christopher, welcomed their son, Leviathan, on Dec. 19.

Then the bill came. 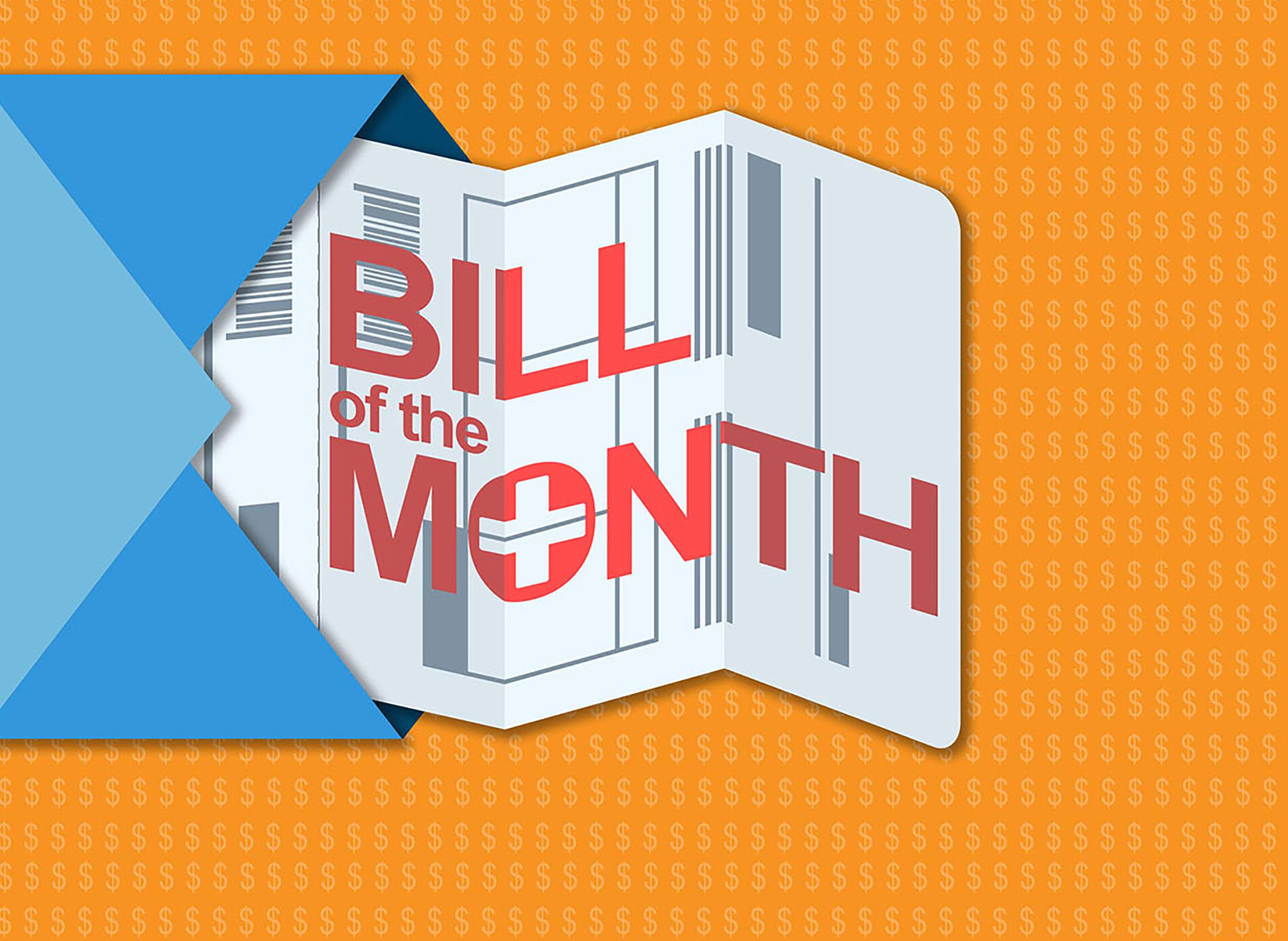 Patient: Karli-Rae Kerrschneider, 32, a certified nurse-midwife who lives with her husband and two children in Baldwin. She is insured through Medica, which her job at Western Wisconsin Health provides.

Service Providers: Hudson Hospital, a 25-bed critical access hospital in Hudson. It's part of HealthPartners, a nonprofit regional health system and insurer based in Bloomington, Minn.

Medical Service: Kerrschneider had an uncomplicated vaginal delivery attended by a nurse-midwife and a doula. Her water delivery was followed by a two-day hospital stay for herself and her newborn. Her only pain relief during her labor was the analgesic gas, which is a mixture of 50% nitrous oxide and 50% oxygen.

Kerrschneider was charged for 39 units of nitrous oxide, or about $124 for every 15 minutes the tank was in her room after a nurse showed her how to use the gas — whether or not she was using it. After almost 10 hours, the charges amounted to $4,836.

"I think it's ridiculous that they charged so much," she said, pointing out that she didn't even have IV pain relief. "I can buy my own machine for that."

Kerrschneider even joked with her husband that for that amount of money she could have had the baby at home, bought her own nitrous oxide machine and rented it out to other people afterward. Well, she was close. A new nitrous oxide delivery machine retails for around $6,500 and tank refills cost less than $50, according to CareStream America, a company that sells the equipment.

Judith Rooks, a retired nurse-midwife and past president of the American College of Nurse-Midwives, helped popularize the use of nitrous oxide during childbirth. Rooks said that while she was appalled to hear of the hefty bill, she wasn't too surprised.

"There is no transparency or standardization," Rooks said, noting that charges can vary widely for nitrous oxide during labor.

Part of that problem comes down to the recent resurgence of the practice in the U.S. In 2011, two hospitals offered nitrous oxide for childbirth in the U.S. Now an estimated 1,000 hospitals and 300 birthing centers provide it, said Michelle Collins, a professor and former director of nurse-midwifery at Vanderbilt University School of Nursing.

The use of nitrous oxide has long been common during childbirth in the United Kingdom and Canada, in part because of its low cost. Many people in the U.S. have learned about the practice while watching the popular British period drama Call the Midwife, set in the 1950s. Epidural anesthesia largely displaced nitrous oxide in the U.S. in the '70s.

When Karlli-Rae Kerrschneider had her daughter, Eleanor, in 2016, she'd had an epidural and didn’t like being confined to her bed. When she gave birth to her son, Leviathan, in 2018, she chose nitrous oxide instead. 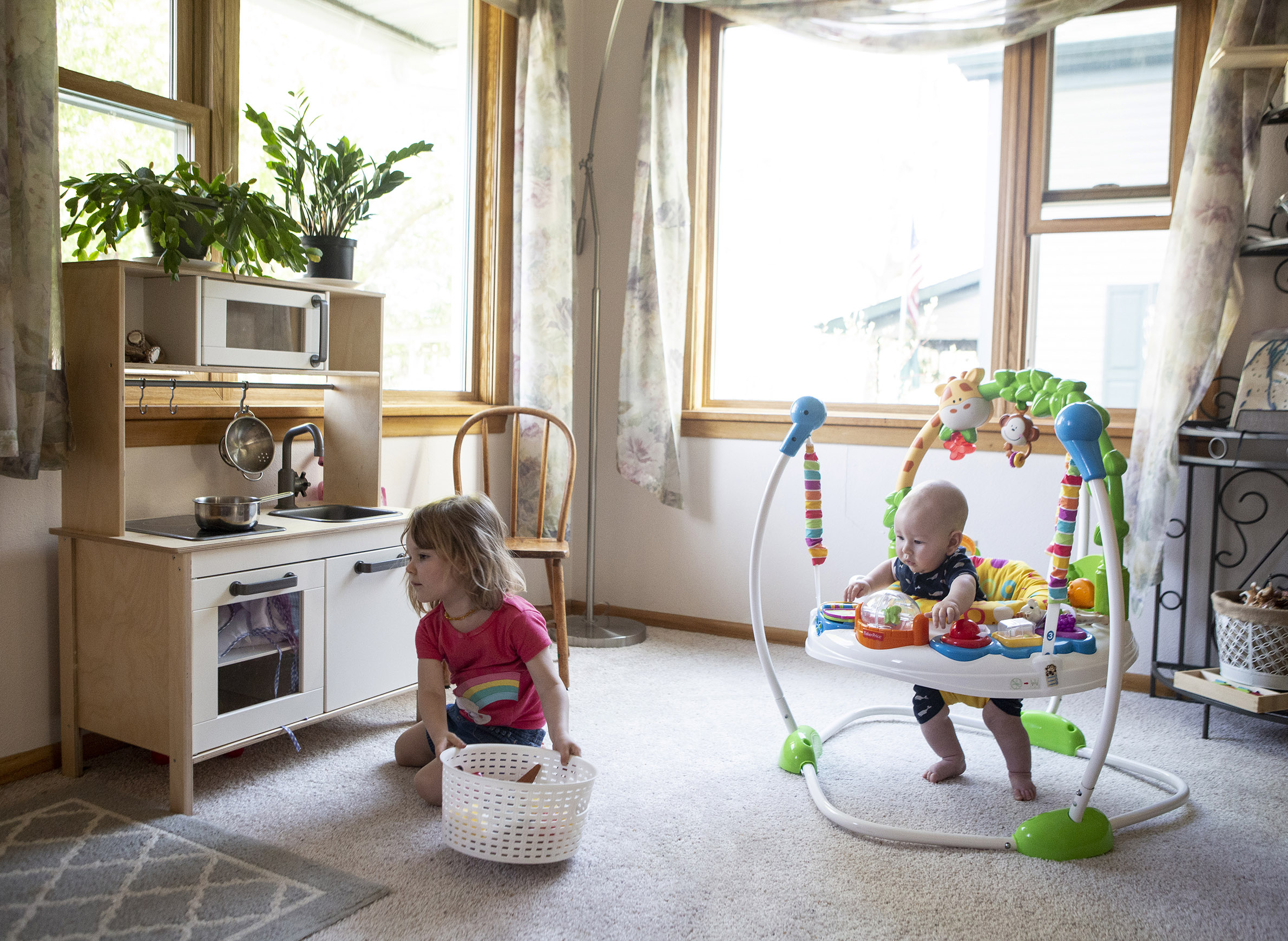 Typically (and safely) overseen by nurses, nitrous oxide is commonly billed at a flat fee — anywhere from $100 to $500 for access to the machine and gas. Sometimes hospitals charge for the mask, typically $25, Collins said. Laughing gas itself is very cheap — it costs about 50 cents an hour during labor, she said. Sometimes hospitals don't charge anything for it at all.

But billing can change if nitrous oxide is administered or supervised by a physician or nurse anesthetist, which means the intervention can be assigned an anesthesia code.

Kerrschneider was charged under this method, contributing to her higher bill. This raised red flags for Kerrschneider because an anesthesiologist wasn't present during any part of her labor at the hospital, which led her to question her bill. 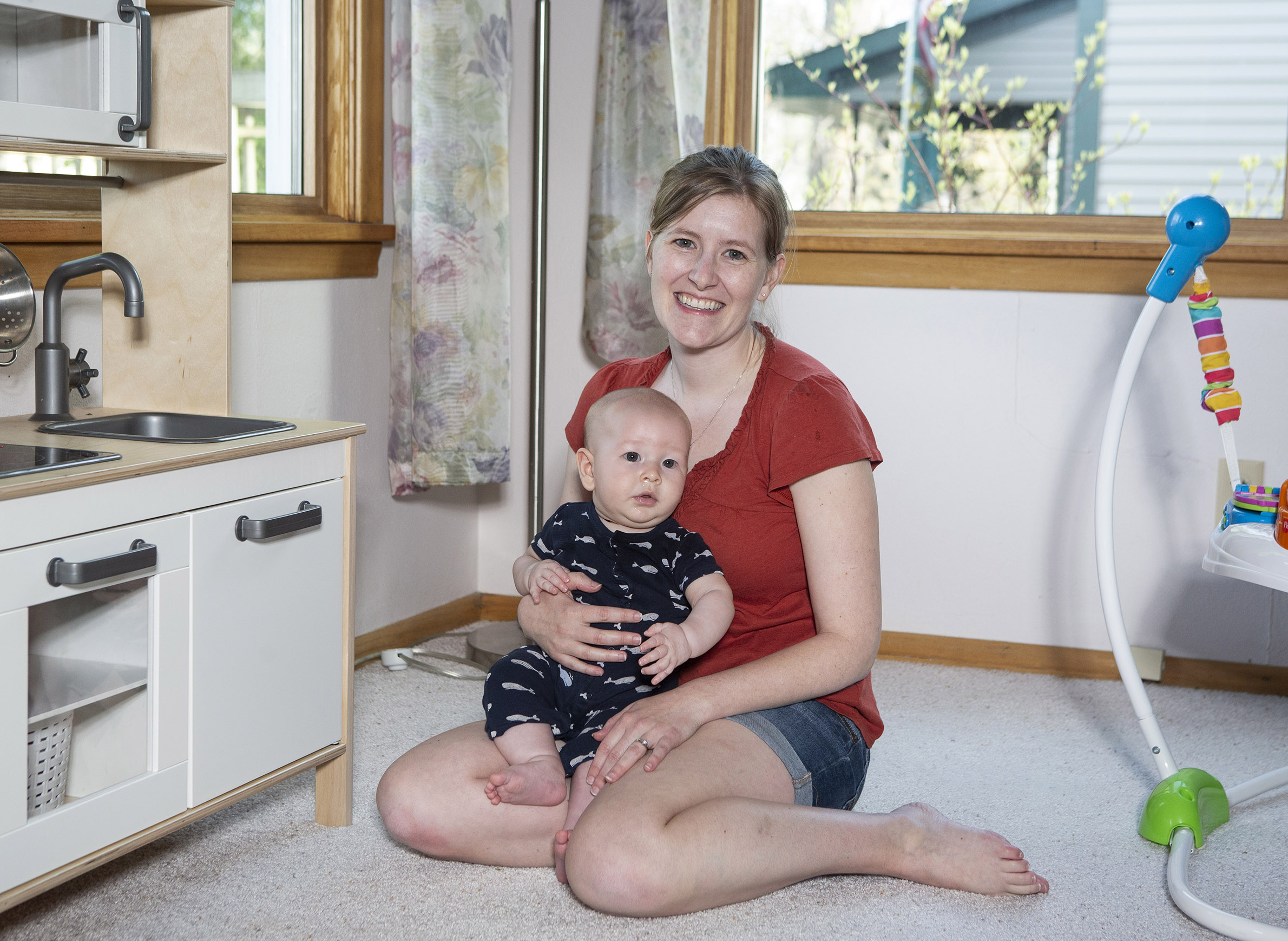 Ackerman + Gruber for Kaiser Health News
Karli-Rae Kerrschneider welcomed her son, Leviathan, without ever seeing an anesthesiologist. Kerrschneider says she "wouldn't trade it for anything." The nitrous oxide she opted for instead of an epidural cost $4,836.

Hudson Hospital told Kaiser Health News in a statement that the anesthesia category is the one it uses to bill for that service, noting that "the billing category is broad and does not necessarily indicate that an anesthesiologist or a certified registered nurse anesthetist performed a service." For comparison, though, Hudson Hospital charges, on average, only $1,495 for an epidural, according to its communications office. That's less than a third the cost of the nitrous.

"I've seen these ridiculous bills for birth — I can't believe anybody pays them," Rooks said. "That's completely out of step with any kind of actual cost, but so is pretty much any bill that comes through."

Resolution: When Kerrschneider saw she had been billed for anesthesia, she called the hospital repeatedly about the coding, wondering if the hospital had accidentally charged her for an epidural. She protested further when she discovered the high charge was simply for nitrous. She knew that the hospital where she works charges a flat fee of about $100 for the same thing.

Insurer Medica told Kaiser Health News it refused to pay the $4,836 Kerrschneider was charged for nitrous oxide costs, citing "provider responsibility." That means Medica did not specifically judge the charge for nitrous to be too high, but that it had an agreed upon rate for childbirth with Hudson Hospital, and total charges can't exceed that amount.

The hospital knocked the nitrous oxide charge down to the one-hour rate of $496 — still almost five times what her own hospital would charge. 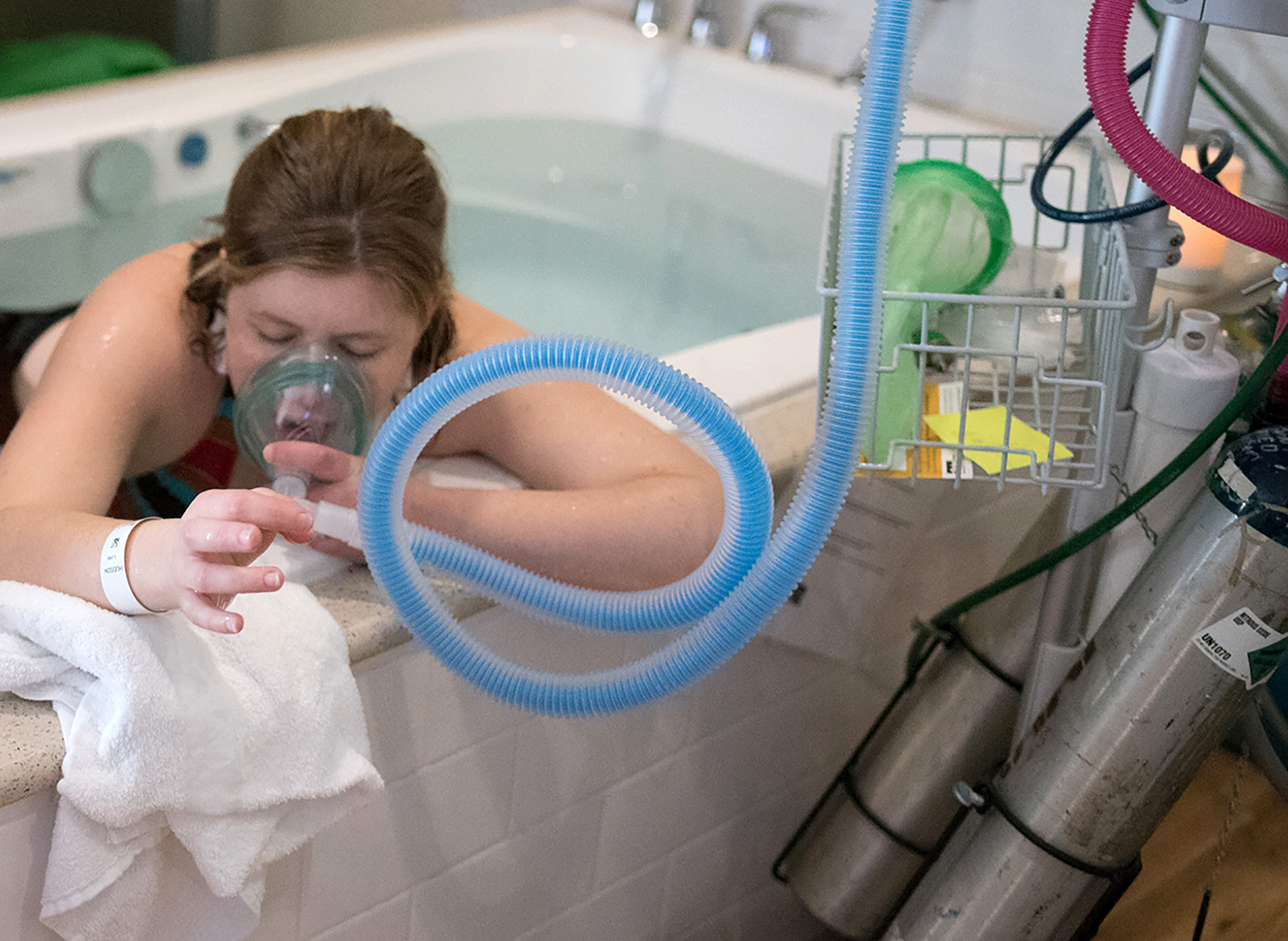 Courtesy of Kara Jo Prestrud, Birth Made Beautiful
Nitrous oxide delivery, due in part to its resurged popularity, does not have a standardized charge or code.

Kerrschneider eventually gave up and accepted the reduced nitrous charge since she didn't want to further antagonize people in the region where she also works as a nurse-midwife. Altogether for the care she and her son received for his birth, she was on the hook for deductibles and copayments that totaled of $3,635. She paid it.

"I was just tired of dealing with it," she said. "I had a newborn I was breastfeeding, and I didn't want to have it hanging over my head anymore." Still, she was appalled that a birth with so few interventions could end up costing so much. "How many people have given birth at this hospital and have paid it in cash or whatever just because they didn't know?" she asked.

The Takeaway: Nitrous oxide used during labor and delivery does not have a standardized charge or code, which is surprising considering there are medical charge codes for just about everything — including being pecked by a chicken or getting sucked into a jet engine.

Prices, and billing methods, for childbirth can vary widely among hospitals. Some hospitals may offer a price that includes items like an epidural, use of a birthing tub, breastfeeding education and nitrous, if desired and needed. Others will charge for each item — sometimes a lot and, sometimes, by the minute.

Kerrschneider said she didn't think to ask about charges for nitrous oxide, considering her own hospital charged so little for the service. 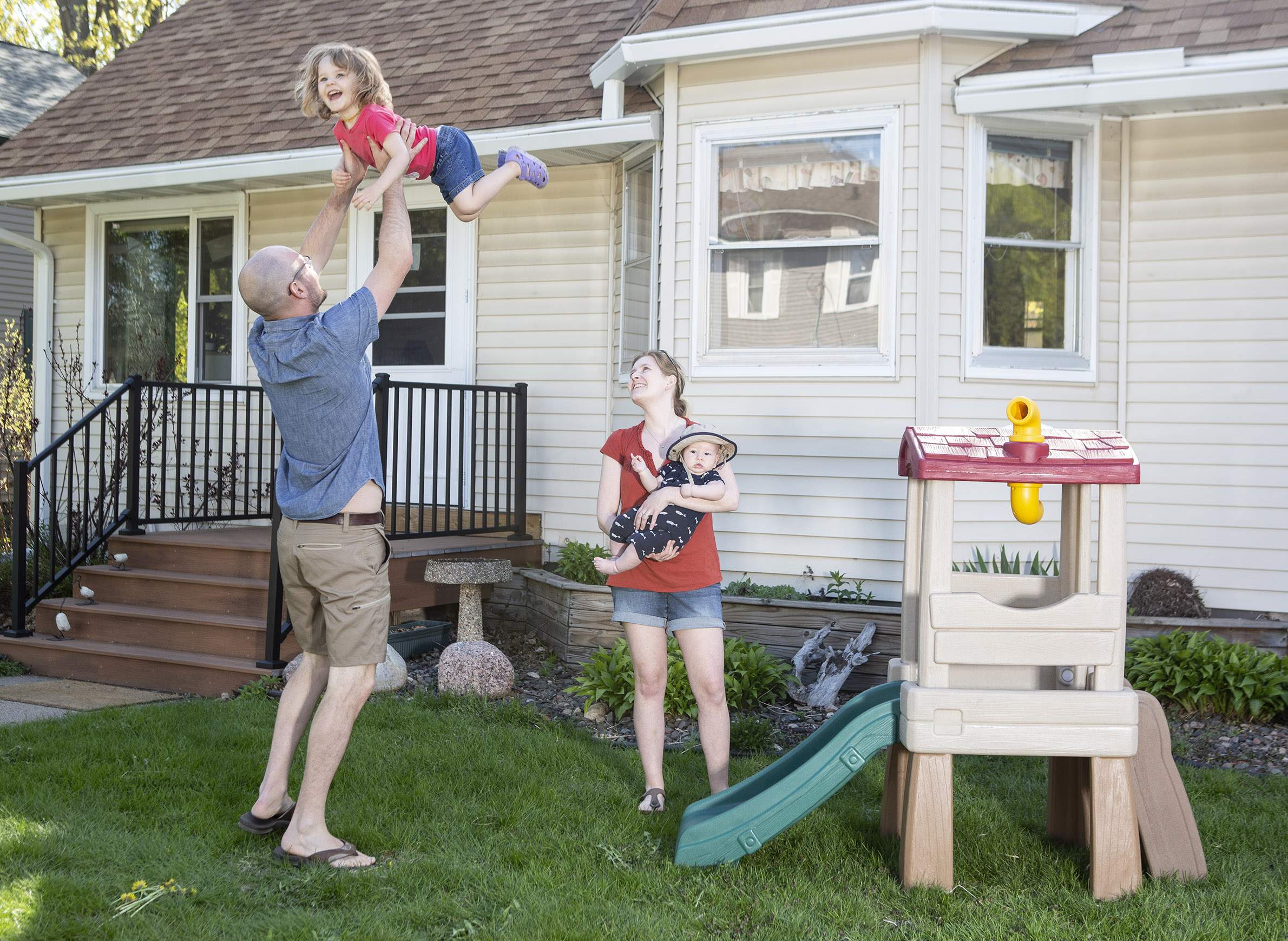 Ackerman + Gruber for Kaiser Health News
Karli-Rae and Christopher Kerrschneider play with their kids, Eleanor and Leviathan, in their front yard in Baldwin.

Before you decide where to have your baby — before any elective hospitalization — ask for an all-inclusive estimate and a pricing breakdown, and be sure you understand how the hospital calculates its bills.

Once you've left the hospital, ask for an itemized bill and scrutinize it carefully. Kerrschneider was an informed medical professional who works in the labor and delivery field, which helped her realize she was being overcharged. But if, for example, you see a big charge for anesthesia when you never saw an anesthesiologist, ask questions, make a fuss. Only you can catch some types of unscrupulous billing: You were in the delivery room. Your insurer was not.

Bill of the Month is a crowdsourced investigation by Kaiser Health News and NPR that dissects and explains medical bills. Do you have an interesting medical bill you want to share with us? Tell us about it!

Editor's note: Kaiser Health News is a nonprofit news service covering health issues. It is an editorially independent program of the Kaiser Family Foundation that is not affiliated with Kaiser Permanente. This article was originally published on May 29, 2019.