Is Wisconsin At Risk Of Losing Its 8th Congressional Seat After 2020? 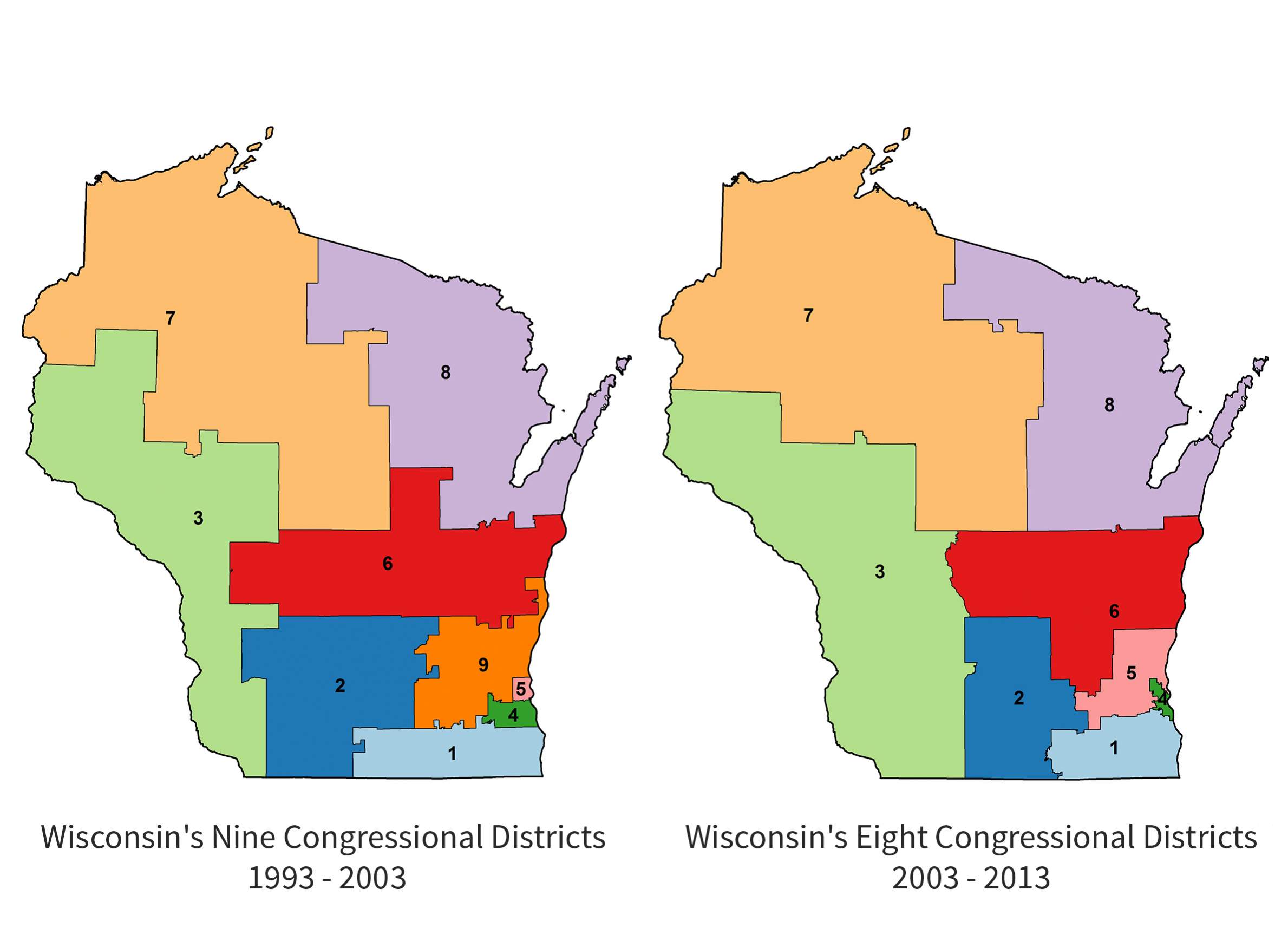 UW Applied Population Laboratory
Wisconsin had nine districts in the U.S. House of Representatives from 1993-2003, but one was eliminated when all seats were reapportioned after the 2000 Census.

With nearly 5.8 million residents, Wisconsin is ranked twentieth out of all 50 states in terms of total population. It's a size that enables Wisconsin to have eight seats out of 435 total in the U.S. House of Representatives, at least until population fluctuations within the state and around the nation entitle it to a different level of representation.

The next U.S. Census is scheduled for 2020. A primary function of the nation's decennial enumeration, enshrined in the Constitution, is to obtain a count of current population used to reapportion the House of Representatives. Over a century ago, Congress decided to limit the size of its lower chamber.

Congress created a cap of 435 seats in the House of Representatives following the 1910 Census, and instituted a reallocation process in advance of the 1930 Census. (There was a short-term increase to 437 seats when Alaska and Hawaii became states in the late 1950s.) Therefore, after each census, these seats are shuffled among the states depending on their current populations.

Because states cannot have fractional seats — for example, a district that has territory in both Wisconsin and Minnesota — reapportionment within each state must be in whole numbers. Since 1940, Congress has used a formula called the method of equal proportions. While not all 435 House seats represent exactly the same number of constituents across the country, it is the most equitable method to balance the size of House members' districts with a seat cap in place.

The equal proportions formula creates a ranking system of states and the potential House seats for each. By law, every state must receive one representative, regardless of how small it is. That means seats #51 through #435 are assigned based on a state's population and a priority multiplier for each subsequent seat that it may receive

As a census is conducted every 10 years, the results of the equal proportions formula means there are a number of states on the bubble for getting additional or losing House seats.

The following tables illustrates the states that were near the #435 seat mark after the 1990, 2000 and 2010 censuses, as well as the positions of 8th and 9th Congressional seats for Wisconsin.

The U.S. Census Bureau produces annual estimates for states' resident populations. There are several ways to project these estimates forward to 2020 in an effort to determine the likely results of the next Congressional apportionment.

The University of Wisconsin Applied Population Laboratory used each state's components of change (births, deaths and migration) of 2015-17 to forecast its population at 2020. Based on this forecast, Wisconsin's 8th House seat slips to the #429 position, six positions above the cut-off of 435 seats.


A national political consulting and research firm, Election Data Services, has also created its own scenarios using four different assumptions; it places Wisconsin's 8th seat from the #426 to #429 positions. 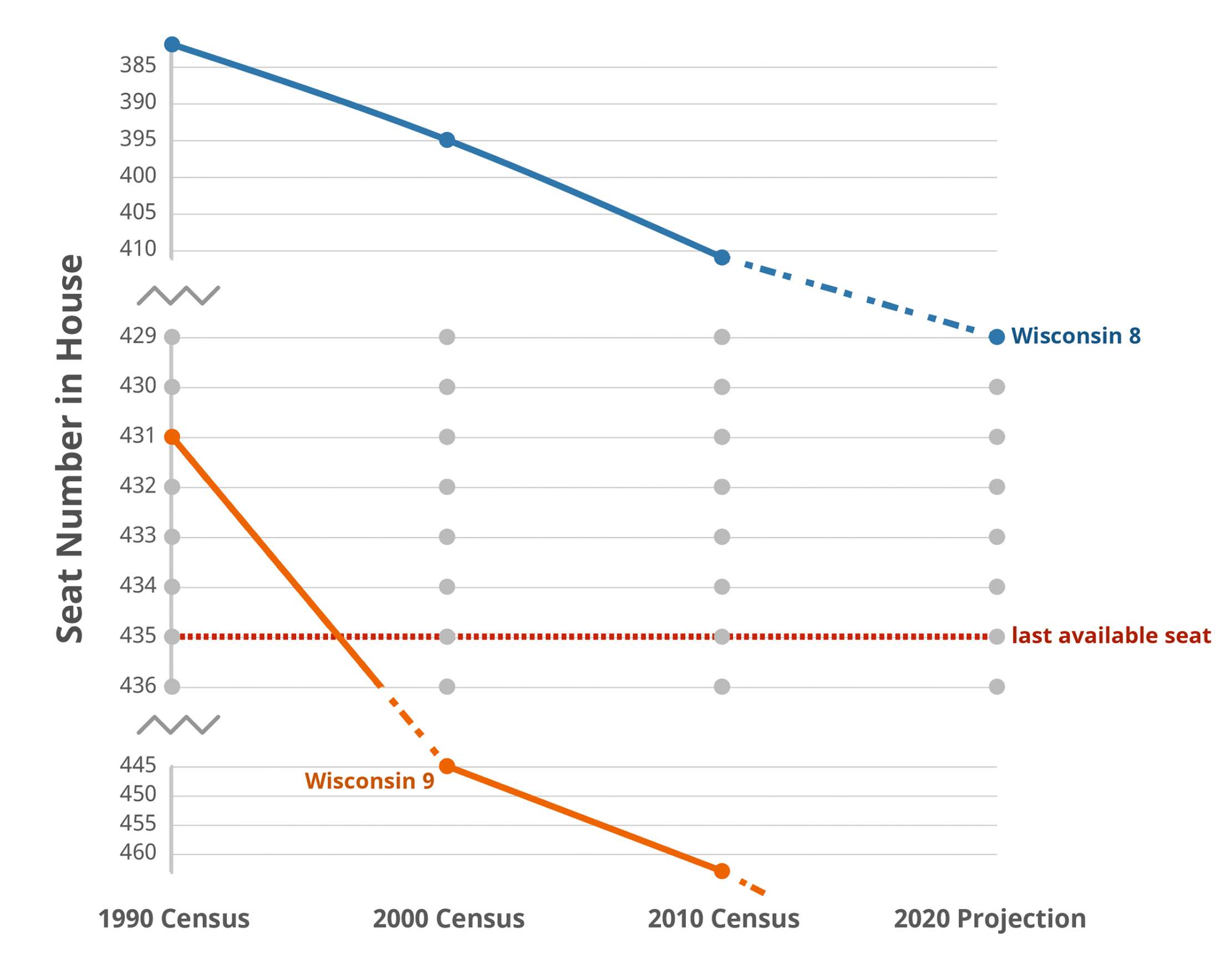 Caitlin McKown/UW Applied Population Laboratory
Wisconsin's proportion of representation in the U.S. House has been steady declining over recent decades.

What could cause Wisconsin's 8th seat to slip below #435?

While Wisconsin is projected to retain all of its Congressional seats following the 2020 Census, there are several factors that could place its eighth seat at risk.

For starters, growth in Wisconsin's population may be smaller than has been estimated and is forecast for the near future. It's possible that Wisconsin's population change from 2010 through 2017 is not as large as the Census Bureau's estimates indicate. Furthermore, the projected growth to the 2020 Census may be less than expected.

In order for Wisconsin's 8th seat to fall to the #436 position, its population would have to be approximately 115,000 less than projected for 2020. But this outcome is unlikely. The most foreseeable element of population change, natural increase (births minus deaths), is solidly positive in Wisconsin; the state adds roughly 16,000 new residents annually due to natural increase. It is unlikely that migration — the more volatile element of population growth — has been over-estimated substantially over the past seven years.

Another factor may be that states following Wisconsin in the apportionment ranking are growing faster than estimated and forecast. For example, if Pennsylvania's population at 2020 is approximately 35,000 higher, its 17th seat would move to the #429 position and Wisconsin's 8th seat would fall to #430. However, the likelihood that all six states that follow Wisconsin (in positions 430 through 435) have grown faster than estimated is slim.

Federal military and civilian overseas population are another consideration. First added in the 1970 Census, federal military and civilian personnel (and their dependents) are attributed to their home states and become part of the apportionment population. Nationally, the federal personnel and dependents accounted for roughly one-third of one percent of the apportionment count in 2010.

There is no ongoing estimate of U.S. federal overseas population, but currently, the Census Bureau estimates armed forces personnel abroad are at about one-half the level they were in April 2010. In short, this segment of the population is an unknown factor, but substantial shifts among the states would need to occur to cause a change in the apportionment rankings.

Finally, under-enumeration is a looming challenge. Concerns about adequate funding for the 2020 Census have raised the worry of a potential undercount. A "short" census would affect not only Wisconsin but all states. In particular, on the national level, estimated undercounts have been greatest in recent censuses among African Americans, Latin Americans and American Indians living on reservations. Given that Wisconsin has smaller percentages of these populations than other states, an undercount would have greater impact elsewhere.

Some states that are "on the bubble" have begun applying state funds for promotion and outreach activities to ensure as complete a count as possible. For example, Minnesota is currently projected to narrowly lose its 8th congressional seat following the 2020 reapportionment, which has motivated that state's government to get an early start on Census 2020 promotion. Ensuring a full and accurate count of all residents could keep the above the line for an 8th seat.

Wisconsin has had as many as 11 U.S. House seat in the past, but that number steady declined over the 20th century.

Although Wisconsin's 8th Congressional seat is most likely safe for the next decade, the long-run population trend in the state is a decline relative to other states. The overall trend in recent decades suggests that its representation in Congress may shrink again before long.

David Egan-Robertson is an applied demographer with the University of Wisconsin Applied Population Laboratory and UW-Madison Department of Community and Environmental Sociology.