What To Know About The 2020 Census In Wisconsin 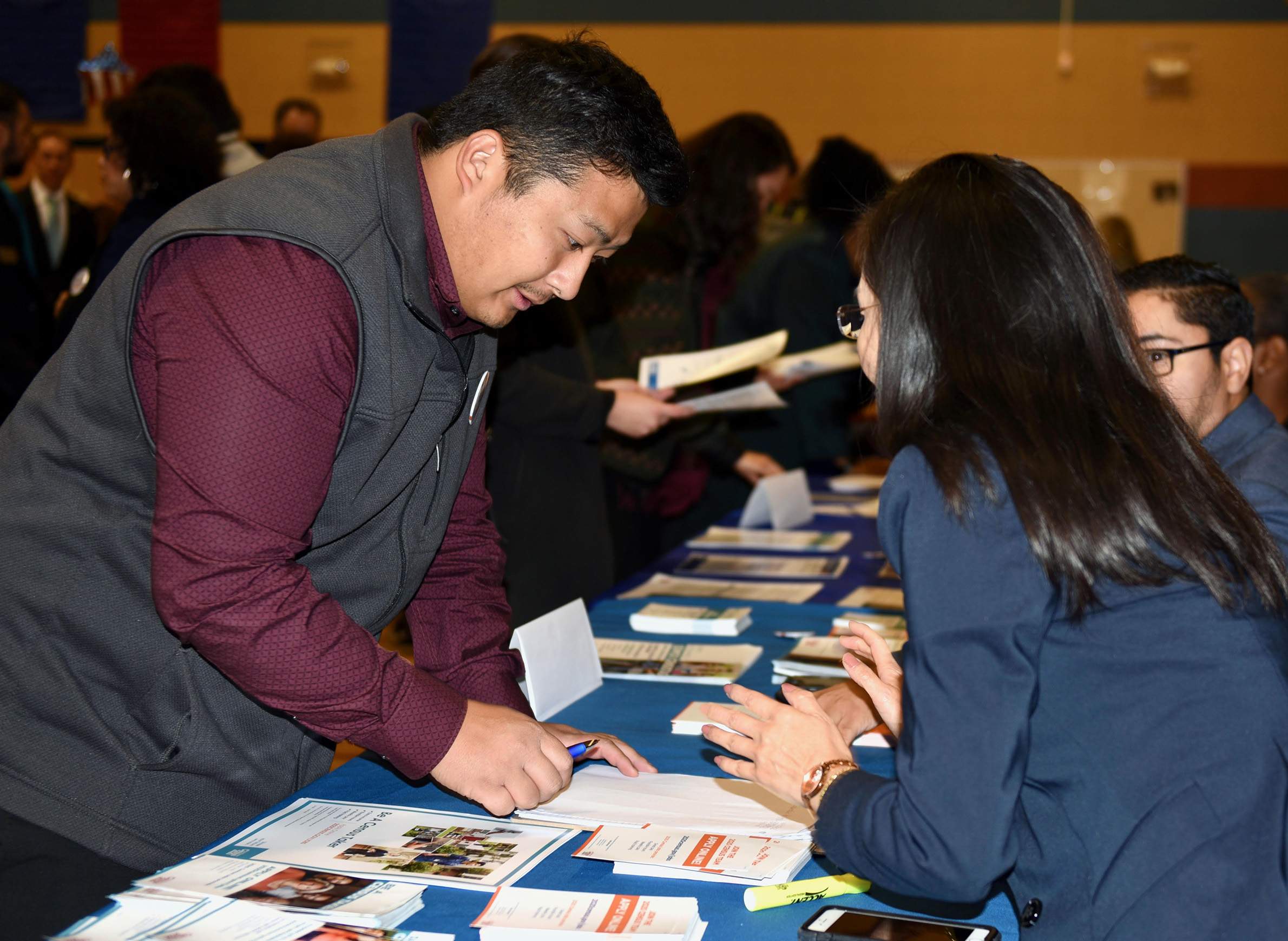 Sue Vliet/Milwaukee Neighborhood News Service
The U.S. Census Bureau is looking for people to be census takers for the 2020 census. Here, a man looks at information about the census on Oct. 28, 2019 at Journey House in Milwaukee.

Shortly after returning home from school one day in spring 2010, luscely Flores, who was 13 at the time, and her mother heard a knock on the door. Peering through the window, Flores' mother saw a man holding a laptop. He wore business casual attire and a lanyard around his neck.

Her mother was hesitant to open the door. At the time, ICE raids were becoming more frequent, and the Flores family, as undocumented residents, didn't want to risk deportation. When Flores realized the man was a census taker, she encouraged her mother to open the door.

"I remember telling my mom, 'It's going to be OK. I learned about this in school,'" she recalled.

Eventually, the man came inside. For nearly an hour, Flores translated for her mother, and the census taker noted everyone who was living in the house.

Flores now works for Milwaukee-based Wisconsin Voices, a nonprofit that aims to increase civic engagement. In her role as canvass training manager for the census, Flores shares her story and encourages more people to participate in the census.

While the census is still weeks away, here's what you need to know about it — and what it means for Wisconsin and the nation.

What is the census and its purpose?

The census is a way for the government to count every living person in the country, and it serves many purposes.

During a news conference, state Rep. David Crowley, D-Milwaukee, explained the importance of the census. The population of a state determines how many seats it receives in the U.S. House of Representatives and how many federal dollars it receives.

Some $675 billion of federal funding is split among the states each year, Crowley said — money that funds education, Medicare, transportation and more. A George Washington University study found that Wisconsin received about $12.6 billion through 55 federal spending programs that are guided by 2010 census data.

Additionally, the census provides the state Legislature with fundamental data as it reshapes congressional and legislative districts every 10 years.

What is the history of the census?

The United States took its first census in 1790, a time of just 13 states with a population of nearly 4 million.

Thomas Jefferson, the secretary of state and census bureau chief at the time, spearheaded the census. Under his leadership, U.S. Marshals conducted a six-question survey, which was to be done every 10 years. The questions dealt with name, age, sex and race.

In 1830, Congress approved a more uniform questionnaire. In 1940, the census consisted of two surveys: one to count the population and the other to collect housing information. This changed in 1960, when the two surveys were combined. From 1970 through 2000, a short-term survey was sent to all households, while some households received a long-term survey. In 2010, the census consisted of 10 questions.

What are hard-to-count communities?

Some populations are particularly hard to count, whether because members are difficult to locate, contact or interview, according to the U.S. Census Bureau.

Among them, according to the Census Bureau: children under the age of 5, immigrant and refugee communities, homeless people, Native Americans, Latin Americans, Hmong Americans, African Americans, people with disabilities, rural residents without broadband access, renters and people with non-traditional housing, and LGBTQ populations.

"Our census affects the monetary resources that our state can get," said Lt. Gov. Mandela Barnes, a Democrat. "Meaning for every person not counted our state loses out on nearly $1,400 per person per year."

During a news conference, Democratic Gov. Tony Evers said the hard-to-count population in Wisconsin is more than 600,000.

Milwaukee County has Wisconsin’s largest concentration of census tracts where few people responded to census mailings in 2010. Some of those tracts are among the hardest to count in the country, according to an interactive map developed by the CUNY Mapping Service at the City University of New York's Graduate Center. 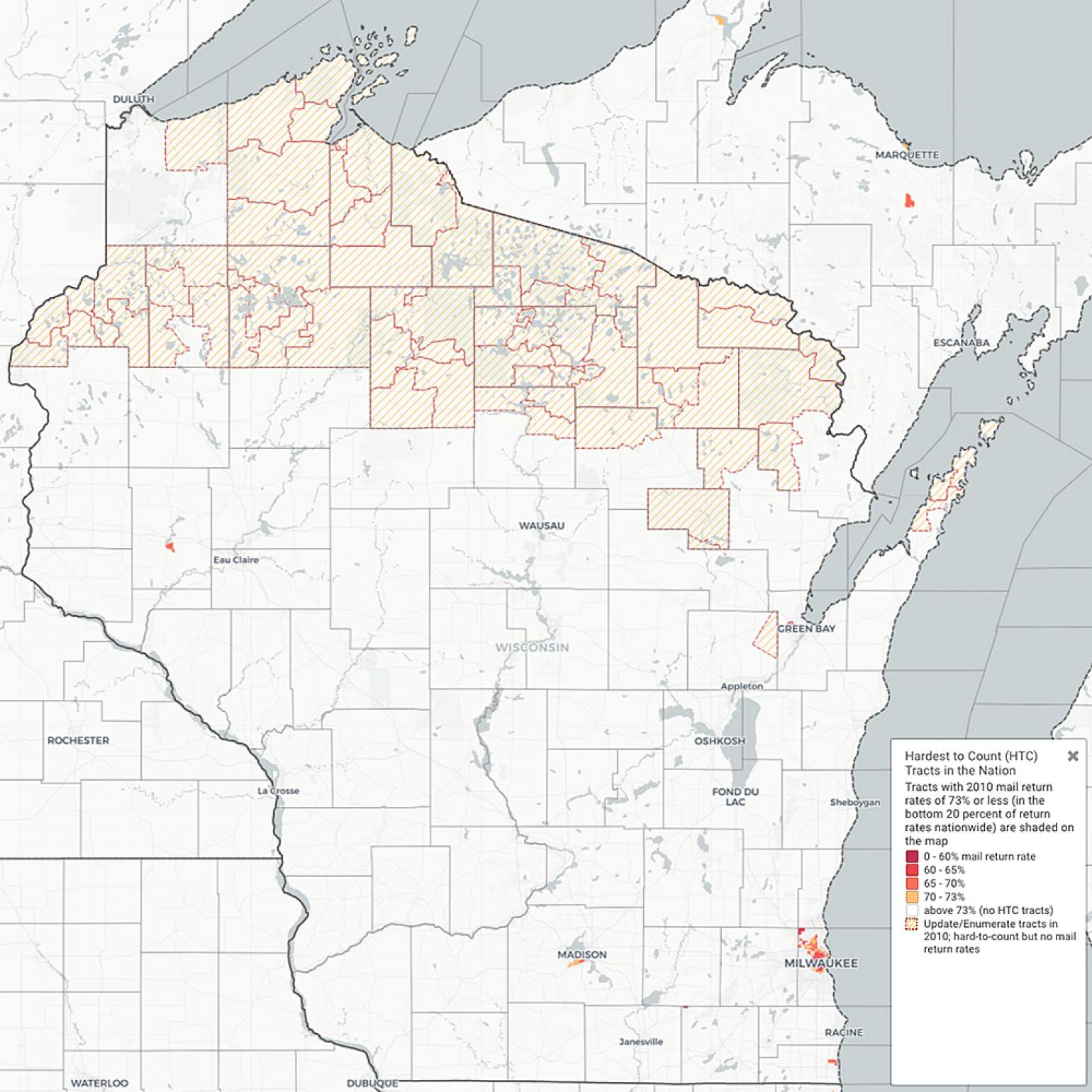 Much of northern Wisconsin may be hard to count in the census, according to a CUNY Mapping Service analysis. During the 2010 census, the region included many communities where census workers did not send mailings to households and instead opted to visit each home to count residents.
HTC 2020 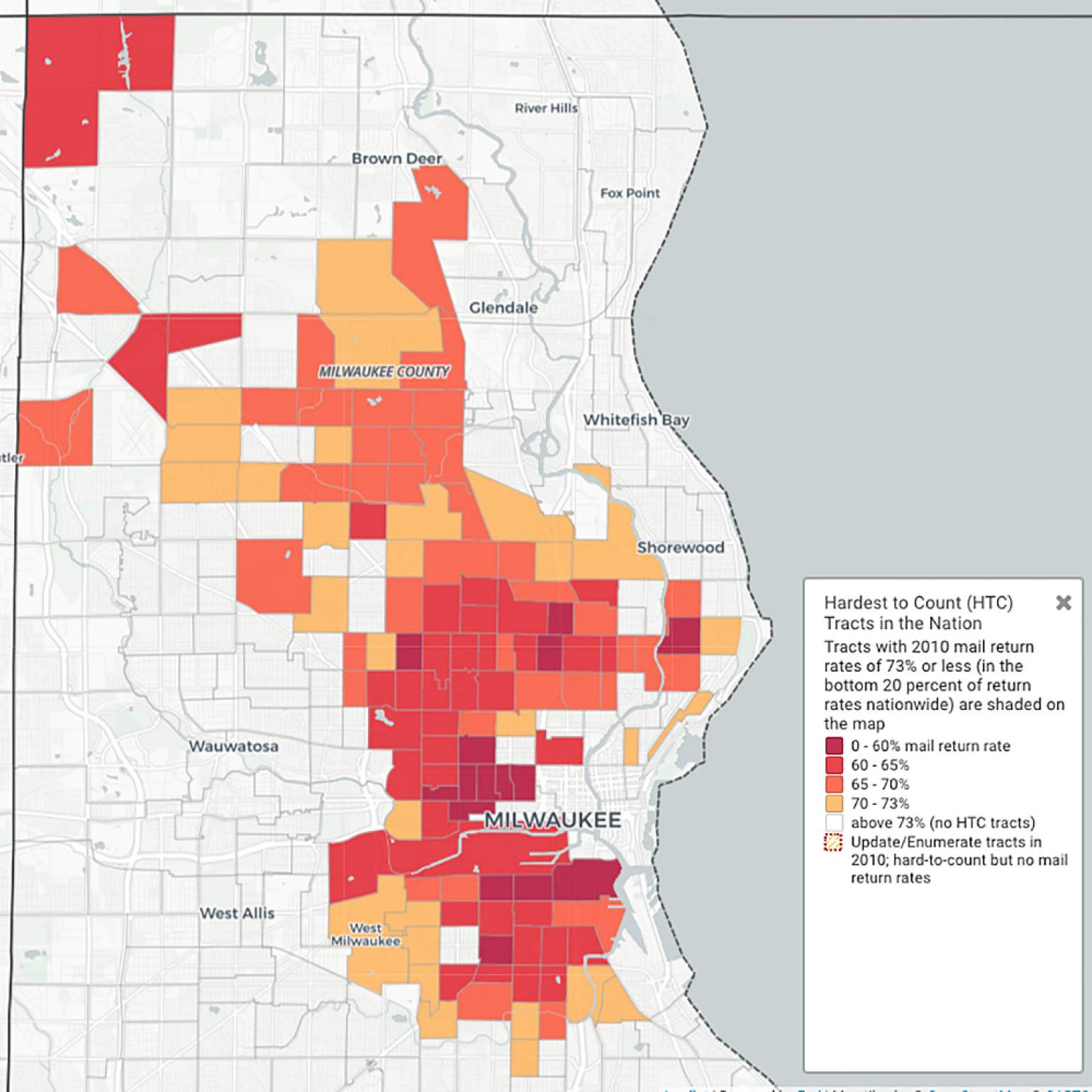 Milwaukee County has Wisconsin's largest concentration of census tracts where few people responded to census mailings in 2010. Some of those tracts are among the hardest to count in the country.
HTC 2020

Much of northern Wisconsin may also be hard to count, according to the CUNY Mapping Service analysis. The region includes many communities where census workers did not send mailings to households and instead opted to visit each home to count residents. These tracts were likely undercounted by 8%, according to the analysis.

What is being done to address hard-to-count communities?

People in hard-to-count communities typically don’t understand the census and its importance, said Marilyn Sanders, a regional director for the Census Bureau.

"It is our goal and our mission to get a complete count in 2020," she added. "We must count everyone once, only once, and in the right place."

Wisconsin and dozens of its local governments have launched "complete count committees" that are joining with civic groups to encourage census participation. The groups are relying on trusted voices in those communities to spread the word. They call the process quick, safe and private. 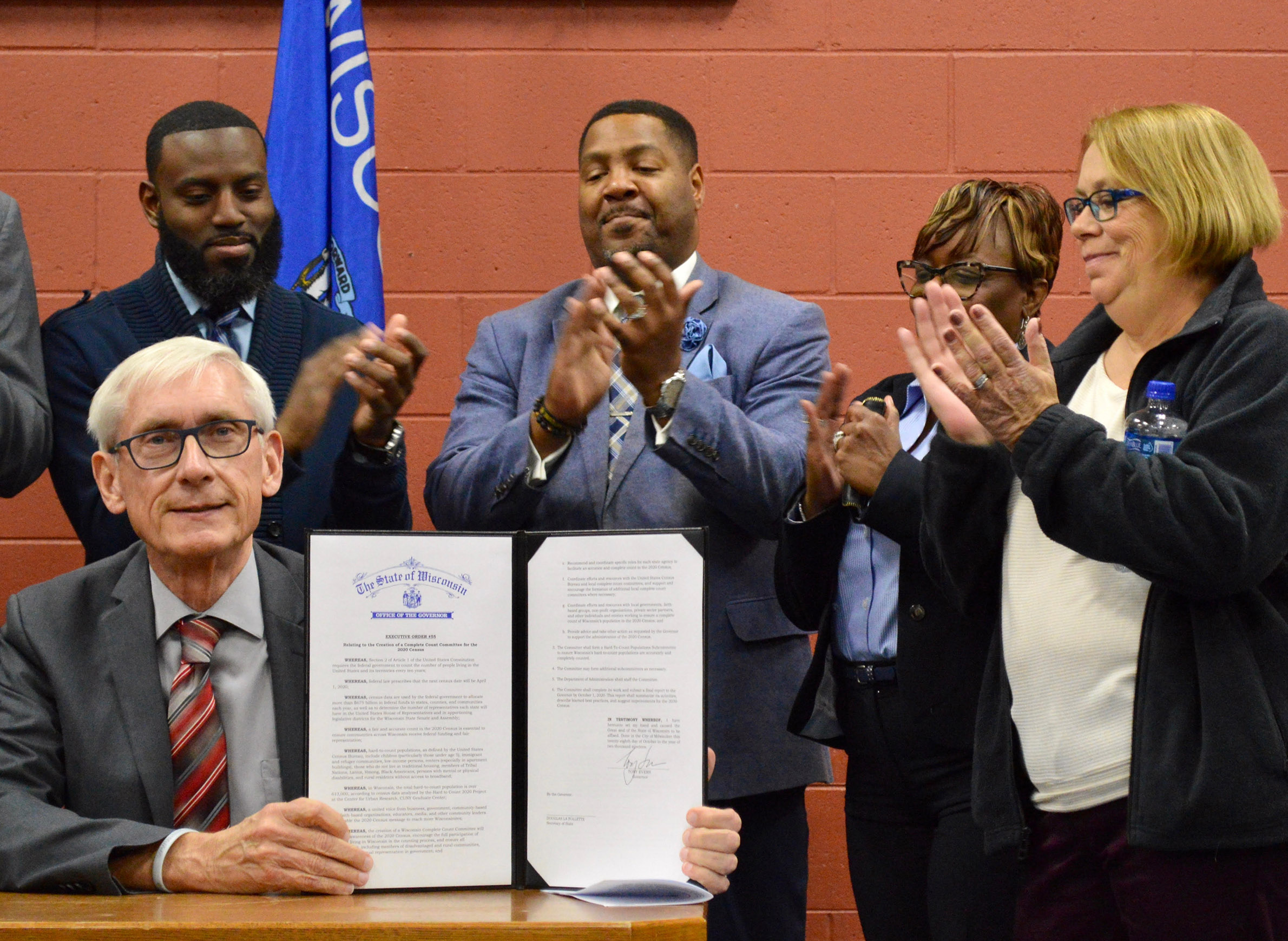 Sharon Robinson, the co-chairwoman of the Greater Milwaukee Complete Count Committee and director of the Department of Administration for the city of Milwaukee, said her committee wants to break down barriers that may prohibit people from participating in the census.

The plan includes setting up kiosks or stations where people can take the census online. For example, the Milwaukee Public Library will have computer spaces available, as will Employ Milwaukee, the local workforce development board.

What are some misconceptions surrounding the census?

There are many misconceptions when it comes to the census, Sharon Robinson said, including that the process will take a long time or is inconvenient. Doing it online or by phone is quick and easy, she said and can take about 10 minutes.

Marilyn Sanders said the information collected by the census is completely private and cannot be shared with anyone.

Title 13 protects an individual's information and prohibits it from being shared with any organization, including law enforcement. Census Bureau employees are sworn to confidentiality and can face five years in a federal prison, a fine up to $250,000, or both, for violations.

A census taker will also have a census badge with an identification number, which can be verified by the Census Bureau, Sanders said.

The Census Bureau aims to count every person living in the U.S., regardless of whether they are citizens. The 2020 census will not ask about citizenship status.

How is data being collected for the 2020 census?

April 1 is officially Census Day, but the data will initially be gathered in one of three ways: online, by mail or by phone.

By March 20, an invitation will be sent to a majority of households asking them to respond to the online census survey; some may also receive a paper questionnaire. A reminder letter will follow. If that household hasn’t responded, then a reminder postcard will be sent by April 3, followed by a reminder letter and a paper questionnaire. A final reminder postcard will be sent by April 27. If at that point, a household has failed to respond, then the Census Bureau will follow up in person, going door to door in June and July.

The online form and telephone line will be available in 13 languages including English, according to the Census Bureau. Additionally, there will be language guides available in 59 languages other than English.

What happens after the data is collected?

By Dec. 31, the Census Bureau will report to the president the population count and the apportionment of seats in the U.S. House to each state. The following year, some census findings will be available to the public.

What can people do to help?

People can apply to be a census taker or for other positions — or they can simply spread the word at work, parties, places of worship and elsewhere. To become a census taker, click here or call 1-855-JOB-2020.

This article is republished from Wisconsin Watch under a Creative Commons license. It was originally published by the Milwaukee Neighborhood News Service. Wisconsin Watch investigations editor Jim Malewitz contributed to this report. The nonprofit Wisconsin Watch collaborates with Wisconsin Public Radio, PBS Wisconsin, other news media and the UW-Madison School of Journalism and Mass Communication. All works created, published, posted or disseminated by Wisconsin Watch do not necessarily reflect the views or opinions of UW-Madison or any of its affiliates.