5 Graphics Depict How The Pandemic Has Spread In The State By Geography, Age and Population
Will Cushman
WisContext
Kristian Knutsen
WisContext
Dec. 4, 2020 | 3 p.m. 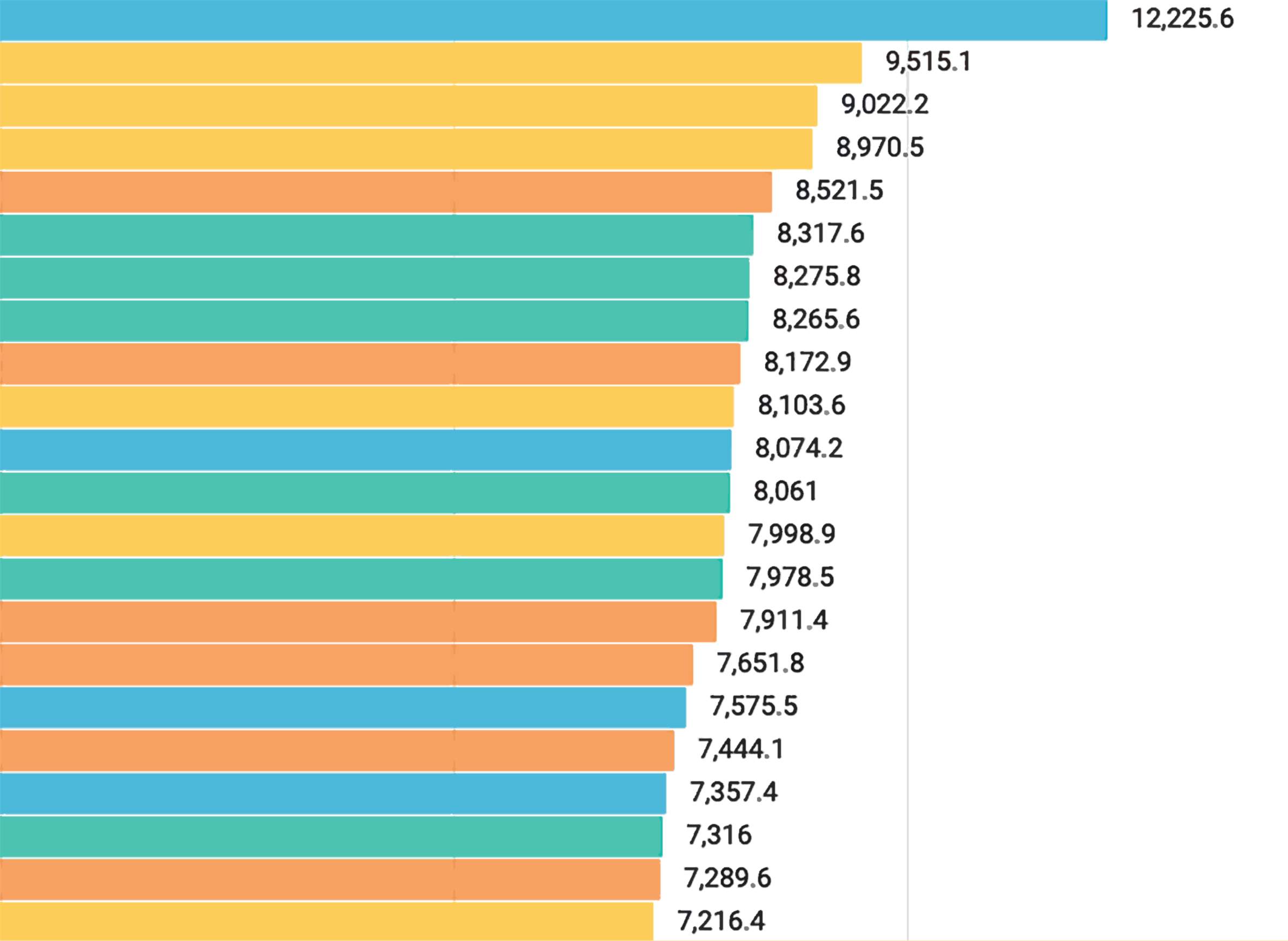 The Wisconsin Department of Health Services issues data on a daily basis that list the number of new confirmed COVID-19 cases reported to the state by local health departments, as well as numbers of deaths and coronavirus tests conducted. Over time, these daily updates can reflect how the pandemic's intensity and geography is shifting in the state.

Click or swipe to the following pages to view how the intensity of COVID-19 has changed across Wisconsin counties, by population size, rural-urban status, median age, hospital region and whether or not there is a state or federal prison present.

The trajectory of the COVID-19 pandemic over the course of 2020 has resembled a roller coaster, with surges of new cases hitting Wisconsin in spring, summer and fall. Even as vaccine development and distribution proceeds, communities across the state will be dealing with the coronavirus for many months to come.

By December, COVID-19's impact was widespread, sickening hundreds of thousands and dealing fatal blows to Wisconsinites in every one of the state's 72 counties. There are distinct geographic differences, though, and the number of cases in different places has ebbed and flowed throughout the year.

The communities bearing the brunt of COVID-19 or have relatively avoided its worst have shifted on a regular basis. Indeed, what started as a crisis largely contained to Wisconsin's largest metropolitan areas has since spread to the state's small towns and their rural hinterlands.

To better understand the shifting impact of the pandemic over time, a series of data visualizations depicts the number of confirmed COVID-19 cases reported in each Wisconsin county from early March 2020, when the coronavirus started spreading in the state, to the end of November. To compare the disease's relative impact in counties of all population sizes, these graphics present case rates adjusted for population.

Wisconsin's 72 counties are divided into seven groups called healthcare emergency readiness coalition regions, labeled HERC for short. The state established the regions in 2014 to aid in regional responses to major emergencies including health crises like the pandemic. Hospitals, public health departments and emergency service providers in each region are responsible for coordinating resources during these major emergencies. Reflecting their central role in responding to the pandemic, the state has reported several key metrics, including hospitalizations, by HERC regions.

These HERC regions illustrate how the state's healthcare system has been strained in different places at different times over the course of the pandemic. As these regions broadly align with geographic regions in Wisconsin, how they have been hit by COVID-19 offers a snapshot of its geographic spread around the state.

The clearest example of COVID-19 spread along geographic lines in Wisconsin is the fall surge, when counties in the northeastern corner of the state occupied most of the top spots for their per capita case rates. Conversely, at the same time, most of the lowest per capita case rates could be found in counties in the northwestern corner of the state.

In this graphic, Wisconsin counties are split into seven categories based on the HERC region. They are, in clockwise order, North Central, Fox Valley, Northeast, Southeast, South Central, Western and Northwest.

Wisconsin counties range widely in population, from fewer than 5,000 residents in the state's two smallest counties to nearly 1 million in its largest. The rate at which COVID-19 has spread in different counties, though, has shifted over time when it comes to their populations.

At first glance, daily county confirmed case reporting shows what has become painfully clear throughout 2020: COVID-19 spares no communities. While cases were concentrated in the state's largest counties during the initial weeks of the pandemic, over the summer and fall it became a crisis in areas of Wisconsin with smaller populations, particularly in rural north and west of Green Bay, including among several of the state's tribal nations.

For example, six Wisconsin counties have had the state's highest per capita rate of COVID-19 cases in the pandemic. The first two were Pierce and Fond du Lac counties, though each were at that peak level when only the first handful of cases had been reported. The next three were Milwaukee, Brown and Racine counties, which are the first, fourth and fifth most populous in the state. These three traded the top position in most of the spring, through summer and well into fall. The sixth was Menominee County, the state's second smallest county by population, which had the highest rate by mid-October and has remained in that position.

In this graphic, Wisconsin counties are split into four categories by population, also known as quartiles.

COVID-19 case rates in Wisconsin counties can also be examined by where they are situated within the rural-urban spectrum. The U.S. Census Bureau categorizes counties as "urban," "mostly rural" and "completely rural" based on the percentage of residents who live in rural versus urban areas.

Visualizing confirmed county case reports by rural versus urban designations shows how COVID-19's spread was concentrated in Wisconsin's urban counties — including some smaller population counties with mostly urban residents — over the spring of 2020 and through the summer. Beginning in late summer, though, per capita case counts started ticking up in some rural counties, rising fastest in predominantly rural areas of northeast Wisconsin into the fall.

In this graphic, Wisconsin counties are split into the three census categories for rural-urban status.

Age has important consequences in terms of the risk COVID-19 poses to Wisconsinites. The course of the pandemic so far makes it clear that advanced age is one of the most consequential risk factors for serious disease and death.

Wisconsin's rural counties tend to be home to more older residents than in the state's metro areas. Categorizing counties by median age shows how COVID-19's spread into rural places coincided with a growth in cases among communities at broadly higher risk due to their relative age.

Several counties with older populations continued to see relatively lower per capita infection rates well into fall 2020, though. These include Bayfield, Burnett and Washburn counties in the northwestern corner of the state, along with Adams County in central Wisconsin.

In this graphic, Wisconsin counties are split into four categories based on the median age of their residents: under 40, between 41 and 45, between 46 and 50, and older than 50.

Understanding how and where the rapid transmission of COVID-19 fuels broader outbreaks can help explain why some Wisconsin counties have experienced very rapid rises in confirmed case counts at various points during the pandemic. In these cases, these spikes are often a result of outbreaks in Wisconsin Department of Corrections facilities where it is difficult for residents or workers to maintain physical distance, namely the state's correctional facilities.

Many of these prisons — including the only federal prison in Wisconsin — are located in more rural areas of the state, so when an outbreak sickens dozens or hundreds of inmates and workers, as has happened repeatedly since the spring, per capita rates in the counties where the facilities are located can skyrocket. Prison-related surges are apparent in Dodge County in early June and again in November, as well as in Crawford County in November. Other places that have experienced spikes in per capita rates related to corrections facilities include Jackson, Sheboygan and Winnebago counties.

By the end of November, Wisconsin's COVID case rates in counties showed a distinct split based on whether or not they were the site of a correctional facility. Most counties with a facility were among the state's upper half of case rates.

In this graphic, Wisconsin counties are split between those that are the location of a state corrections facility and those that are not, with one county — Marquette — the site of a federal prison.

The Pace Of A Pandemic Meets The Speed Of Science As Wisconsin Takes On COVID-19
What The COVID-19 Pandemic Looks Like In Wisconsin: Maps And Charts
A Year Into The Pandemic, What's Driving Varied Coronavirus Rates Across Wisconsin?
COVID-19 Misinformation And The Paranoid Style In Wisconsin's Pandemic Politics
Wisconsin's Urgent, Imperfect, Transparent, Confusing, Essential COVID-19 Data