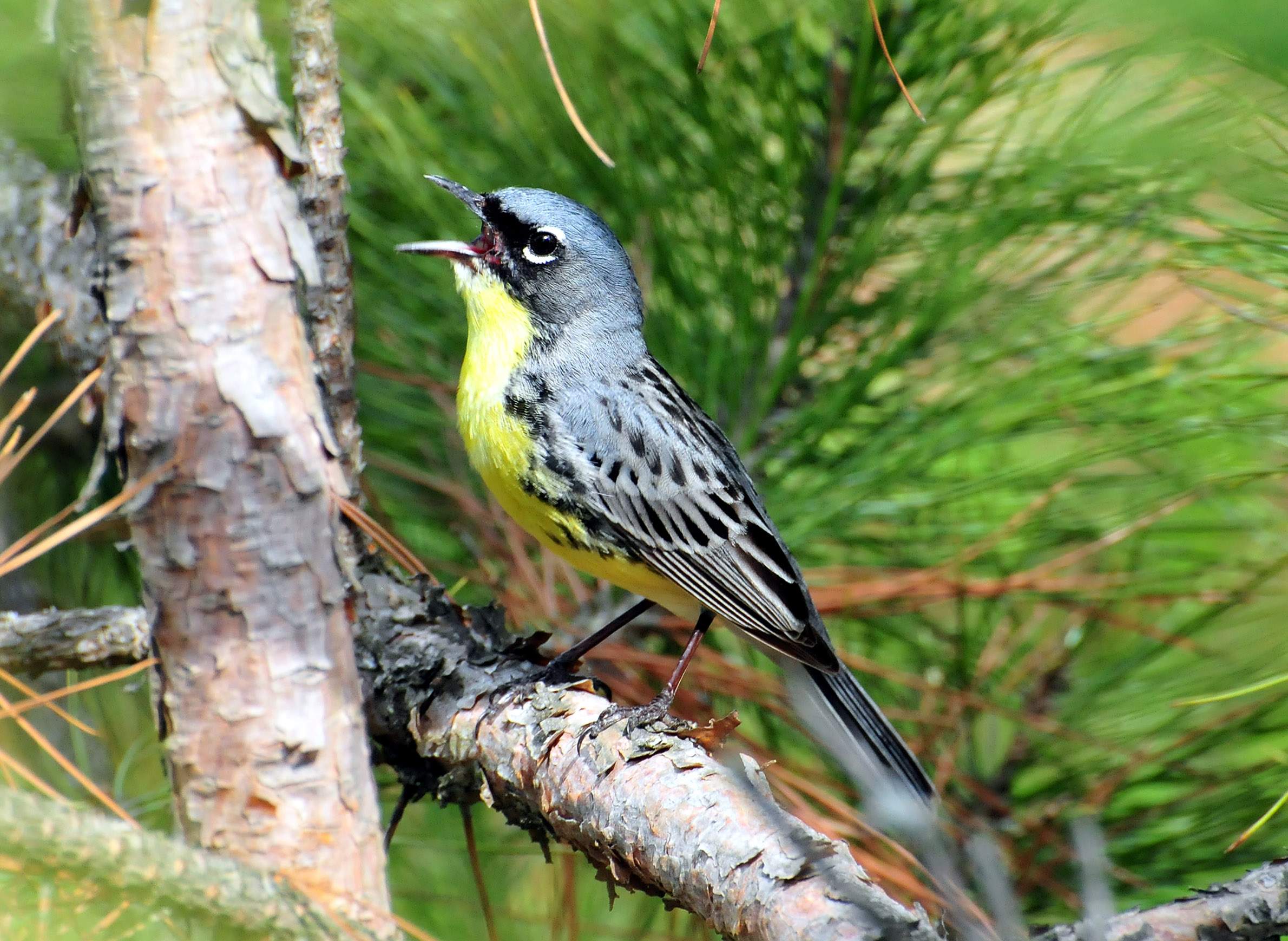 Joel Trick/U.S. Fish and Wildlife Service Midwest Region (CC BY 2.0)
The largest population of Kirtland's warblers in Wisconsin is located in Adams County.

Every day the love song of a Kirtland's warbler (Setophaga kirtlandii) calls throughout the Bayfield County Forest in northwestern Wisconsin. But it isn't coming from a bird.

It's a recording created to lure the endangered species to the forest.

"We had a handful of birds on the landscape, but none of them were finding each other," said Nick Anich a conservation biologist for the Wisconsin Department of Natural Resources. "We thought this technique would be a good way to get all the birds to focus in basically on the same spot."

He got the idea from Michael Ward, an avian ecologist for the Illinois Natural History Survey at the University of Illinois at Urbana-Champaign. Ward has done a number of projects using audio playback to lure species from one area to another.

The technique is referred to as conspecific attraction, meaning it is used to lure the same species to a new location using cues relevant to that species.

Anich took the idea a step further. He lures Kirtland's warblers hundreds of miles away from their main population centers.

Wisconsin's biggest population of Kirtland's warblers is in Adams County in the lower center of the state.

The recording has been successful in drawing birds from there to other parts of the state, Anich said.

In Marinette County, the recording was removed because there are now several pairs of birds and multiple nests, creating a small but self-sustaining population, he said.

But the core population of Kirtland's warblers is in the northeastern Lower Peninsula of Michigan, near Grayling, said Bill Rapai, chair of the Kirtland's Warbler Alliance board of directors.

The volunteer board raises awareness of the Kirtland's warbler and the conservation programs necessary for the species' survival.

A small number of birds can also be found in Ontario, Canada.

"With them in such a small portion of the states, it's kind of a vulnerable situation," Anich said. "If something were to affect the habitat the birds live in, we'd have a lot of birds with nowhere to go. I think establishing other populations of this bird makes the overall population more robust to possible disasters."

The biggest reason the species is endangered is that it requires a specific habitat, Rapai said.

"These are persnickety little devils," he said. "They want to live in young jack pines that are a certain height, a certain age. They nest on the ground in sandy soil underneath the overlapping branches so they have cover."

At one time, this habitat was created naturally by wildfires.

"We no longer let fire run across the landscape," Rapai said. "Everyone thinks wildfires are bad, but that's not necessarily true. Wildfires were a natural part of the jack pine ecosystem in northern Michigan."

There are too many people and too many structures to simply let fires burn, Rapai said. But without them, new jack pines don't grow, and the birds have nowhere to nest. So conversationalists cut down the trees and plant new ones.

"The important thing to understand is the Kirtland's warbler is a conservation-reliant species so it's up to us humans to step in and create new habitat," Rapai said.

While the Michigan Department of Natural Resources is aware of the playback project in Wisconsin, it will not be implementing it.

"Our original goal of 1,000 singing males was met in the early 2000s," said Dan Kennedy, endangered species coordinator for the Michigan DNR. "Now we're more than double the recovery goal. We don't need to do that here."

Anich said his goal is to create self-sustaining populations in the areas of Wisconsin where there's suitable habitat.

In April 2018, the U.S. Fish and Wildlife Service proposed to remove the Kirtland's warbler from the endangered species list. A decision is expected by spring.

Editor's note: This article was originally published on Oct. 10, 2018 by Great Lakes Echo, which covers issues related to the environment of the Great Lakes watershed and is produced by the Knight Center for Environmental Journalism at Michigan State University.