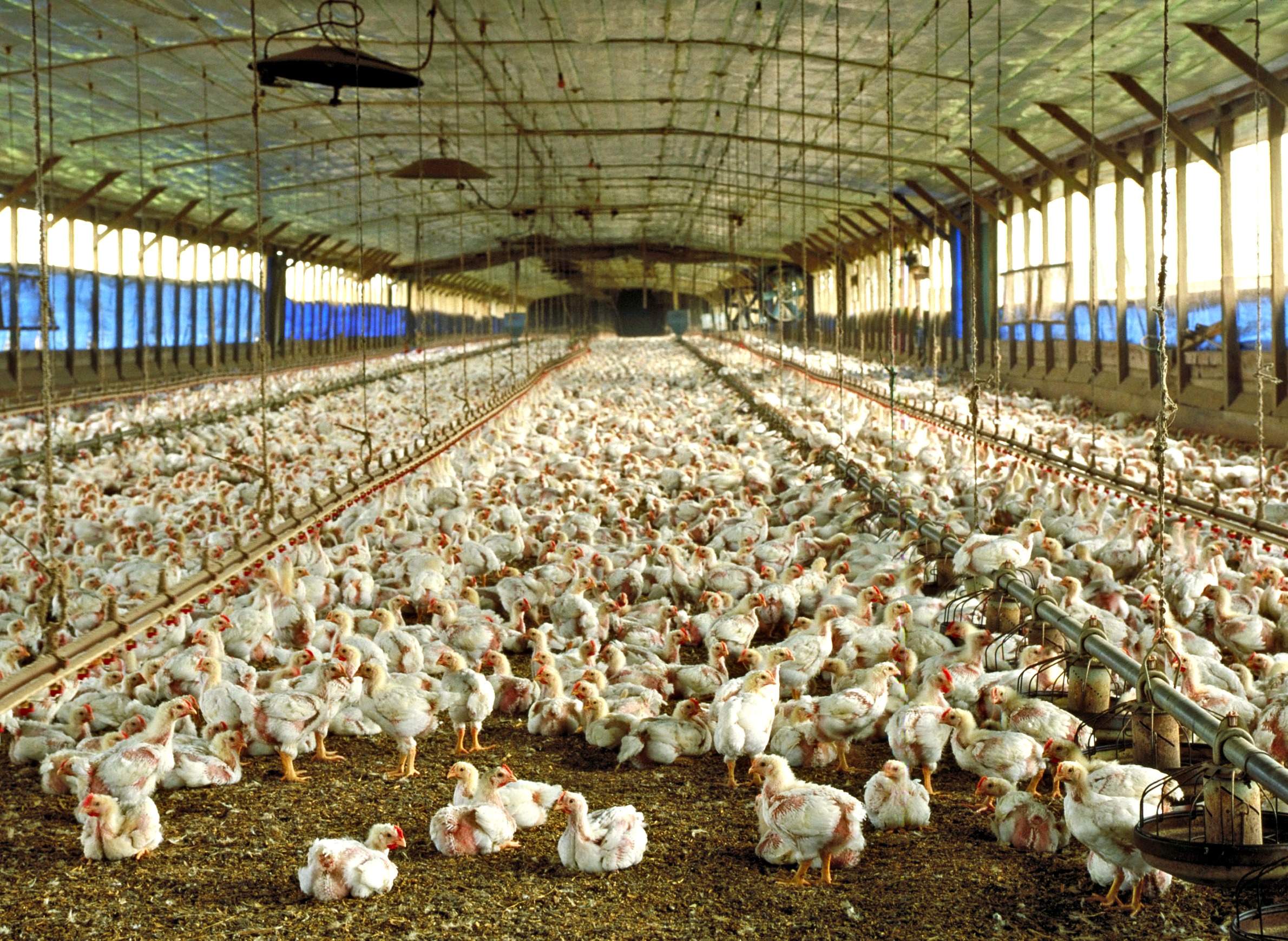 As a highly contagious avian influenza virus spread through the U.S.'s poultry population in 2015, something else began catching on: the word "depopulation."

As farmers and agriculture officials faced the devastating necessity of killing what ended up being some 48 million birds in infected flocks, media reports frequently picked up on this term for exterminating massive numbers of animals.

There's more to "depopulation" than a particularly grim bit of official jargon. While it isn't clear when the term began to be used in the animal disease context, its use reflects how government and the veterinary profession have adapted to the realities of industrial agriculture. The U.S. Department of Agriculture's Animal and Plant Health Inspection Service treats euthanasia and depopulation as two separate concepts, even though the terms are sometimes used interchangeably.

As far as APHIS and the American Veterinary Medical Association are concerned, these are two different scenarios: When one euthanizes an individual animal, it's important to reduce the animal's stress and pain as much as possible. When one depopulates hundreds or even hundreds of thousands of animals, it's important to try to be humane, but more allowances are made for the circumstances, especially the need to kill the animals quickly in order to stop the spread of a contagion, the safety of the people handling the animals and the psychological impact on farmers and others involved.

Thus, the concept represents a balancing act between animal welfare and the exigencies of raising animals for eggs and meat on a large scale. Commentators and activists have blamed factory farming for the devastating toll of the avian-flu epidemic, because putting more animals on one farm, and in confined conditions, makes it easier for a disease to spread.

Gail Golab, who leads the animal-welfare division of the AVMA, which is generally considered the authority on humane treatment of animals, isn't necessarily joining the anti-big-ag chorus on this issue.

"I think at this point, there's no question that we need the number of animals to produce the amount of food that we consume," Golab said. "I think the expectation that you’re going to have fewer animals is not realistic."

Animal disease emergencies aren't going anywhere either, Golab added, given the ability of disease-causing viruses and bacteria to mutate and develop resistance to drugs.

That isn't to say that Golab and AVMA accept the status quo. In the wake of this year's avian flu epidemic, she said the veterinary and agricultural professions need to think hard about a few key issues. First, Golab said research and development must continue to develop depopulation methods that are appropriate for the way livestock is raised now. Second, Golab joined many other figures across industry and government in pointing out that farms need to improve their biosecurity practices to prevent animals from getting and spreading diseases in the first place. Third, the industry needs to reconsider how it designs livestock facilities, because some — like narrow, multi-level houses for egg-laying chickens — make it very cumbersome to kill large numbers of animals. Fourth, Golab said industry and regulators need to speed up the process by which new and innovative technology is brought to market —  a process often hampered by regulatory review and patenting. Lastly, she recommended improving training, support, and equipment supply for emergency-management personnel.

Golab said the AVMA’s standards-setting committee began to grapple with the idea of "mass euthanasia" about 15 years ago and over time that has led to the organization issuing specific recommendations and approving certain methods for depopulation.

"Depopulation is really about understanding that you have an extraordinary circumstance and doing everything you can to make sure that you protect the welfare of the animal at the same time," she said. "The reality is, when you're faced with that kind of an emergency, it's very likely that you're not going to be able to meet all the criteria for euthanasia."

Researchers at the University of Delaware filed a patent on this method in 2007, adapting a foam previously used in firefighting to obstruct birds’ upper airways and ideally cause them to suffocate relatively quickly. (Eric Benson, one of the lead inventors and a University of Delaware bioresources engineering and animal and food science associate professor, declined an interview request for this story.) The researchers then partnered with a Havana, Illinois, company called Kifco to commercialize it. Kifco primarily deals in irrigation equipment, and the researchers thought the company’s hose technology would provide a good delivery method for the foam.

Kifco is the only business that sells the technology as it holds an exclusive license to the patent. But you won't see any mention of that on Kifco's website. Rather, this product, which is named Avi-Foamguard, has its own little home on the Internet, a site that touts its benefits but doesn't mention Kifco by name. Given the online postings and undercover videos online that inveigh against the company and the technology, it's not hard to understand why.

But Kelly Hagerdorn, Kifco's president and CFO, said the technology minimizes human exposure to animal diseases. (Even those that haven't infected humans, like the H5N2 virus involved in this year's epidemic, can easily spread from farm to farm via workers' clothes, shoes and vehicles.) Hagerdorn said efficiency also matters, not just for stopping the spread of disease, but also for sparing the mental health of the people involved. And that's where other common depopulation methods including "cervical dislocation" (breaking an animal's neck) and gassing are at a disadvantage.

"It is, having personally been on-site … it's not an easy thing to watch," Hagerdorn said of the depopulation process.

In the wake of the epidemic, USDA officials have run into controversy over a depopulation method called ventilation shutdown —  shutting off the ventilation systems in a facility and letting the birds die of heat stress. In July, John Clifford, USDA chief veterinary officer, broached the idea of allowing farmers to use ventilation shutdown to kill infected flocks, arguing that farmers need the option because, unlike carbon dioxide and Avi-Foam, it requires no special equipment. Officials with the Humane Society objected, saying that the method can take up to three hours to kill the birds (the USDA has said that it takes 30 to 40 minutes), and said the method amounted to "baking the birds to death en masse."

In new guidelines issued on Sept. 18, the USDA did decide to allow ventilation shutdown, but on a case-by-case basis. The USDA's new policy for using ventilation shutdown in avian influenza outbreaks includes a "decision tree" that requires first ruling out water-based foam of carbon dioxide based on how long each method would take and what the epidemiological consequences would be if depopulation were delayed. The Humane Society has continued to condemn ventilation shutdown in media reports.

The continued controversy again reflects the balancing act that bred the concept of "depopulation" in the first place, and highlights officials' and farmers' concerns about responding quickly to animal-disease emergencies. And Clifford is hardly the only person in the agriculture world to stress that farmers dealing with infected flocks need a range of options to suit varying circumstances.

Hagerdorn, for her part, acknowledges that her company's technology is appropriate only for situations where all the infected animals are on floor level, and can't be used on, for instance, egg-layers in a multi-tiered facility. In the wake of the epidemic, Hagerdorn said she thinks the deployment of Avi-Foamguard "by and large went very well," and the company is testing some possible upgrades based on suggestions from farmers. But she also said that no matter what equipment a farm has on hand for emergencies, the most important thing is thorough preparation.

"It's like anything with an emergency management plan —  the key is in the details," she said. "If you don't have a good plan and understand how each of these pieces works together, you're likely to run into some trouble."