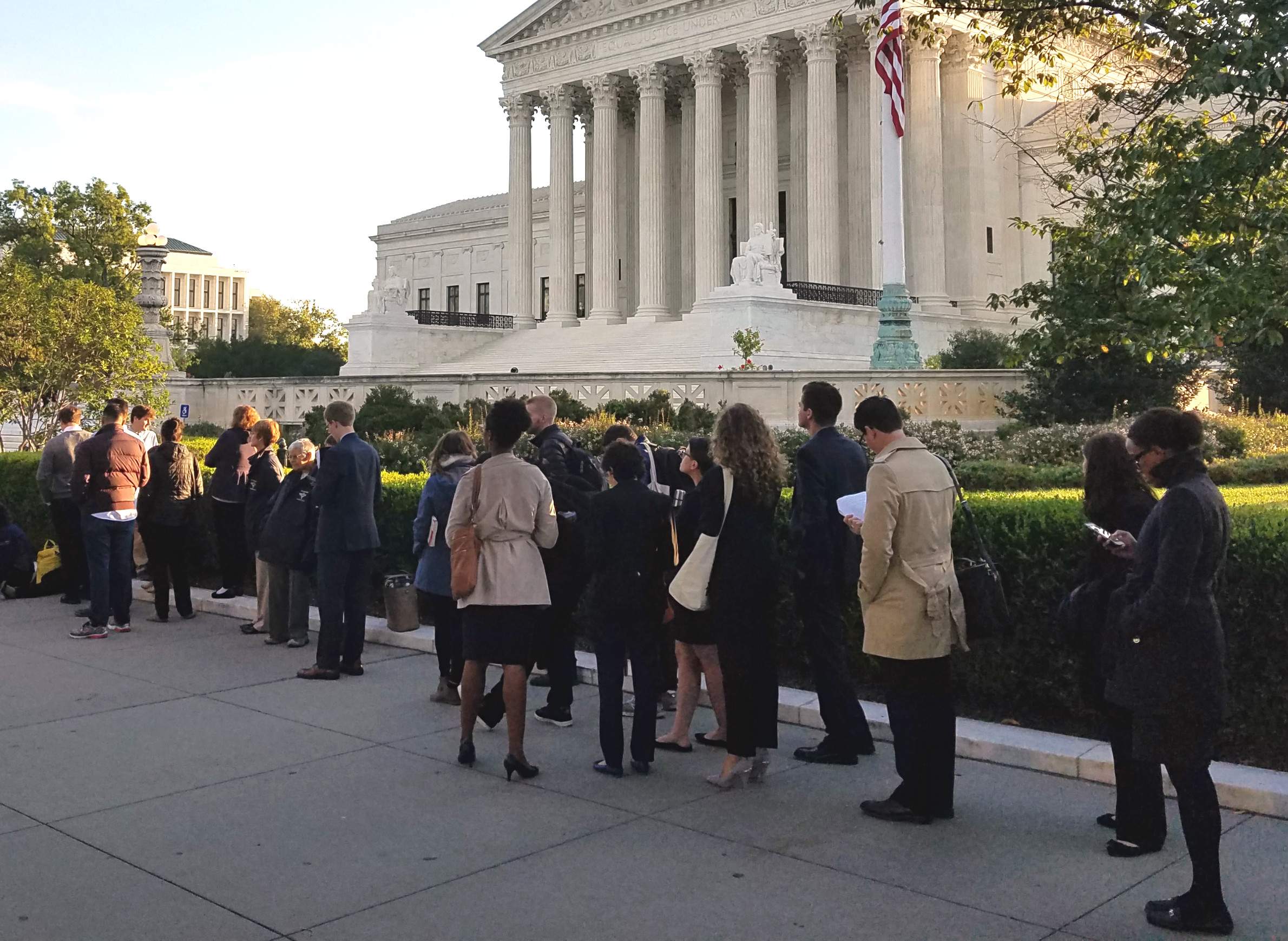 Shawn Johnson/WPR
A long line snakes around the front entrances to the U.S. Supreme Court Building on Oct. 3, 2017 before oral arguments begin in Gill v. Whitford.

Months of waiting and guessing are customary in cases heard by the U.S. Supreme Court, and that cycle is hitting home in Wisconsin.

The potentially historic lawsuit challenging partisan gerrymandering in Wisconsin's state legislature, Gill v. Whitford, came to the nation's top court for oral arguments on Oct. 3, 2017. The plaintiffs charge that the state Assembly district map is so politically skewed that it violates their rights, and argued that the Court could use a number of methods to measure when the redistricting process has resulted in an acute partisan gerrymander, including but not limited to a novel standard called the efficiency gap. The Court is expected to issue a decision by June 2018.

In the meantime, observers are engaging in the tradition of trying to sort out how the Supreme Court will rule in Gill v. Whitford by reading into the justices' questions and statements during oral arguments and extrapolating opinions they've issued in past cases. Along with this type of analysis, observers are also considering the influence of ideological and partisan motivations on the part of the justices, acknowledging that the Court is not merely a deliberative body that interprets case law and the Constitution in a vacuum removed from national politics.

Wisconsin Public Radio capitol bureau chief Shawn Johnson was on the ground in Washington, D.C. as advocates made a public case outside the Supreme Court Building for changing the way legislative districts are drawn and lawyers' arguments unfolded inside. As Johnson explained several days later in an Oct. 6, 2017 interview with Wisconsin Public Television's Here & Now, these arguments played out in a way that reinforced the conception of the justices' sharp political divide.

People hoping for the Court to support the plaintiffs in Gill v. Whitford and put limits on partisan gerrymandering are pinning their hopes on Justice Anthony Kennedy for two reasons. Despite being appointed by Republican President Ronald Reagan, the justice has sided with the Court's liberal wing in a number of noteworthy cases, especially those involving gay rights. Kennedy has also hinted in the past that he'd be open to having the Court intervene to curb partisan gerrymandering were someone to provide a standard for measuring abuse in the redistricting process.

In the oral arguments, Chief Justice John Roberts and his fellow justices on the Court's conservative wing voiced clear skepticism about the efficiency gap standard. At one point, Roberts referred to it as "sociological gobbledygook" and suggested that a ruling for the plaintiffs would be interpreted as partisan in favor of Democrats.

By any standard, Roberts' comment is remarkable within the history of the Supreme Court, which frequently addresses pressing constitutional issues by creating and applying a variety of standards or tests, many of them far less mathematics-based and precise than the calculations the efficiency gap test offers.

Justice Ruth Bader Ginsburg sounded much more open to having the Court intervene to limit politically opportunistic redistricting, and asked at one point, "What becomes of the precious right to vote?" At another point, Ginsburg had a dismissive rebuke for the court's newest member, Justice Neil Gorsuch, who made a reference to "the arcane matter of the Constition."

Gorsuch also made a cooking reference.

Neil Gorsuch compared the mix of political science metrics plaintiffs used to measure WI's map to a steak rub where nobody knows the recipe.

If the recipe for the efficiency gap test is the proposed approach for measuring it, though, that's readily available. Of course, Gorsuch was talking about the array of potential methods that could be used to measure partisan gerrymandering, not just one.

As for Justice Anthony Kennedy and his role as a wild card on the Court? He "played his cards pretty close to the vest," Johnson said on Here & Now. Kennedy didn't say much during oral arguments, other than to ask some questions about standing.

The presumption headed into oral arguments in Gill v. Whitiford was that the case hinged on Justice Kennedy. Arguments today support that.

The wait to hear what Kennedy's decision in Gill v. Whitford might be particularly agonizing for the plaintiffs and their supporters, as he's been willing to remake the elections landscape. For instance, he joined the conservative-leaning wing in authoring the majority opinion in Citizens United vs. Federal Election Commission, which opened the floodgates for dark-money political advertising.

Over on the Supreme Court's liberal-leaning wing, Justice Stephen Breyer seemed skeptical of relying on "social science stuff and computer stuff" to limit gerrymandering. He suggested a test that would take into account multiple factors behind an legislative district map, such as whether one party had control of the redistricting process, and whether there's "persistent asymmetry" between the results of the popular vote and the partisan makeup of a state legislature.

The oral arguments in Gill v. Whitford leave plenty of judicial tea leaves to read. It's unclear whether the Court will get involved in limiting redistricting practices that result in partisan gerrymandering. And it's even less clear just how it would go about doing so.