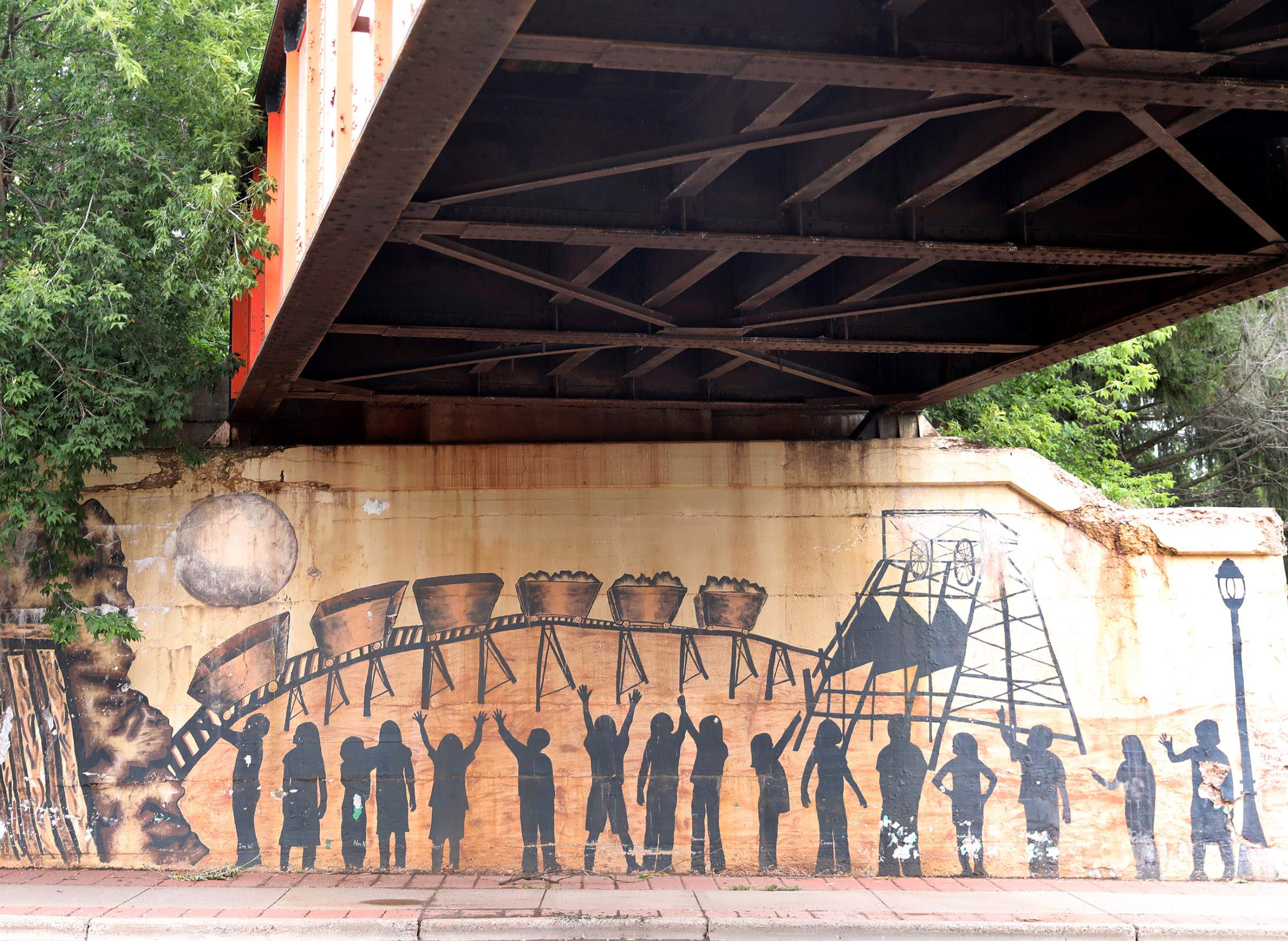 Parker Schorr/Wisconsin Watch
A chipped mural in Hurley celebrates the area's mining history. When the mines closed in the 1960s, the area entered a cultural and economic depression marked by high levels of out-migration and job losses. Community leaders hope new initiatives, like one to expand the area's non-motorized trails, will give the struggling community a spark. Photo taken Aug. 28, 2019.

Fading murals of children, their arms outstretched to iron ore and timber tumbling overhead, celebrate a heyday that has long since passed by Hurley. The northern Wisconsin city of 1,500 in Iron County and Ironwood just across the Montreal River in Michigan's Upper Peninsula were devastated when the area's mines closed in the 1960s. Fifty years ago, Hurley had 2,500 people. It is now down to about 1,500.

"We watched the place start to dry up," says Karen Hagemann, a longtime resident of the area. "A lot of my friends, acquaintances, people from school and church, they moved away because they had to, the parents had to find other jobs."

"When the mines closed, everyone got really depressed, and it's kind of lingered through the generations," agrees Amy Nosal, a University of Wisconsin-Extension agent for Iron County.

Hurley does not have a hospital, but Ironwood, Michigan, does. For specialty care such as radiation oncology, however, people have to commute to Ashland, 40 minutes from Hurley, or Minoqua, which is an hour away.

Transportation can pose a barrier. For weeks on end, Iron County Human Services director Cally Kilger says one county employee drove a resident to Ashland to get cancer treatment.

This is true across rural America, where specialty care and surgery typically require much longer drives. Bob Traczyk and his wife learned that firsthand when she started having trouble lifting her right leg while walking. The two drove 200 miles roundtrip twice a week to see specialists in Duluth, Minn., until she was finally diagnosed with multiple sclerosis.

"That was a heavy burden for us," he says. "It was like eight hours were shot, the whole day."

Dave Mosley, managing director of Navigant Health Care, says rural hospitals in Wisconsin will "hit a crunch" unless they can recruit physicians, which will be difficult without amenities such as adequate broadband, good cellular service and businesses that add to the quality of life. And he says some residents will not feel safe moving to these areas unless they have adequate medical services.

The county has among the worst health outcomes in Wisconsin, with a high rate of premature death. Kilger says county employees often act as backstops for a health care system that does not work for everyone.

A row of bars and strip clubs line Silver Street, the main drag of Hurley, a former mining town in northern Wisconsin. The area has high rates of alcohol abuse, as well as high rates of mental illness and childhood trauma. Photo taken Aug. 28, 2019. 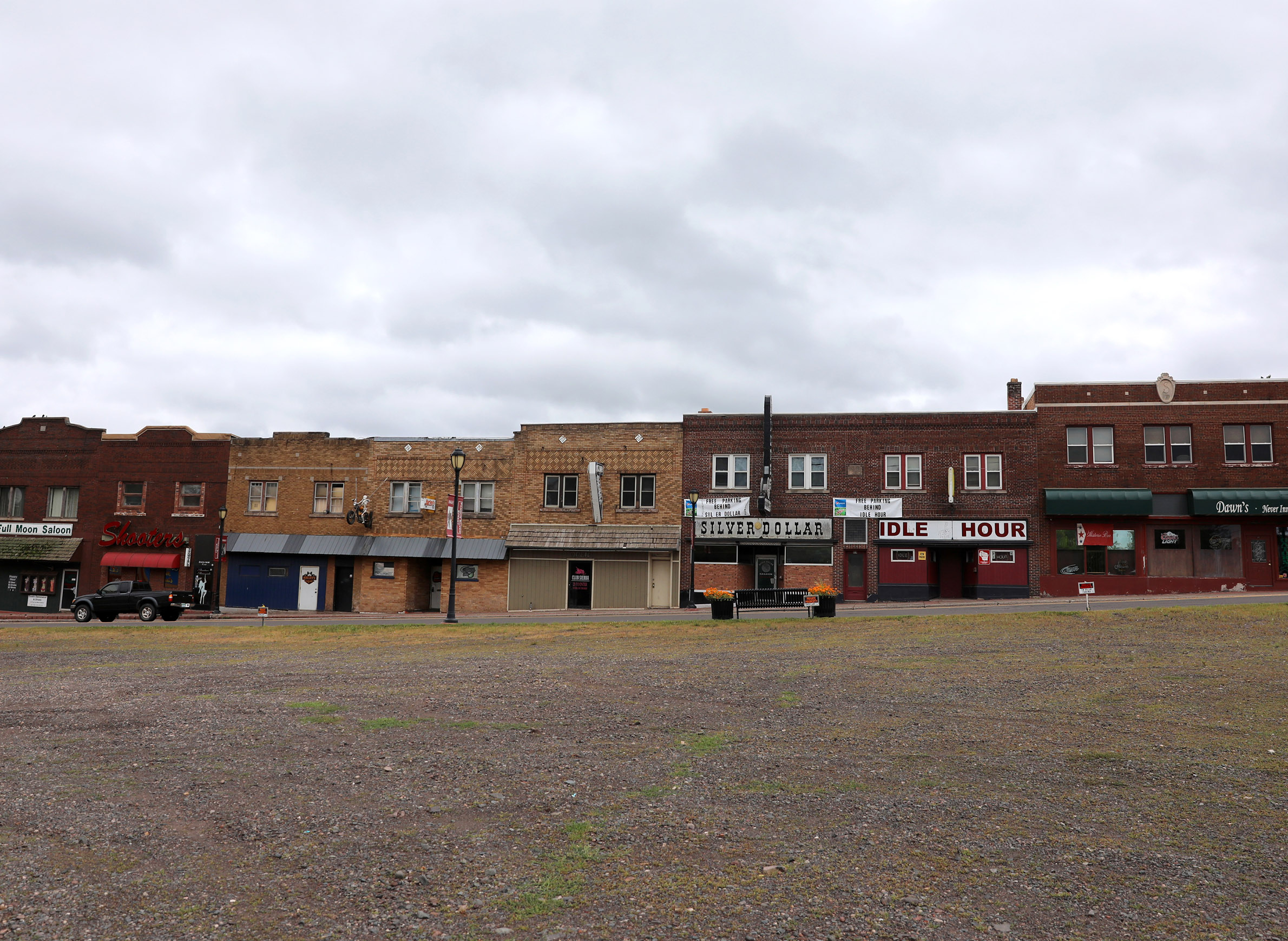 Hurley, whose main strip is lined with bars and strip clubs, has one full-time and one part-time mental health therapist, according to Katie Hampston, health officer for Iron County.

"If we had some more resources in this area, we could potentially … not be that backstop all the time, and that would have better outcomes for people," Kilger says.

Amy Nosal points to a map of Iron County, one of Wisconsin’s northernmost counties. Purple, green, blue and black dotted lines spider through thick patches of forest and rivers.

It is the area's regional dream, she says: a network of trails for walking, biking, kayaking and cross-country skiing. For the county’s residents, the trails would make it easier and more appealing to exercise. 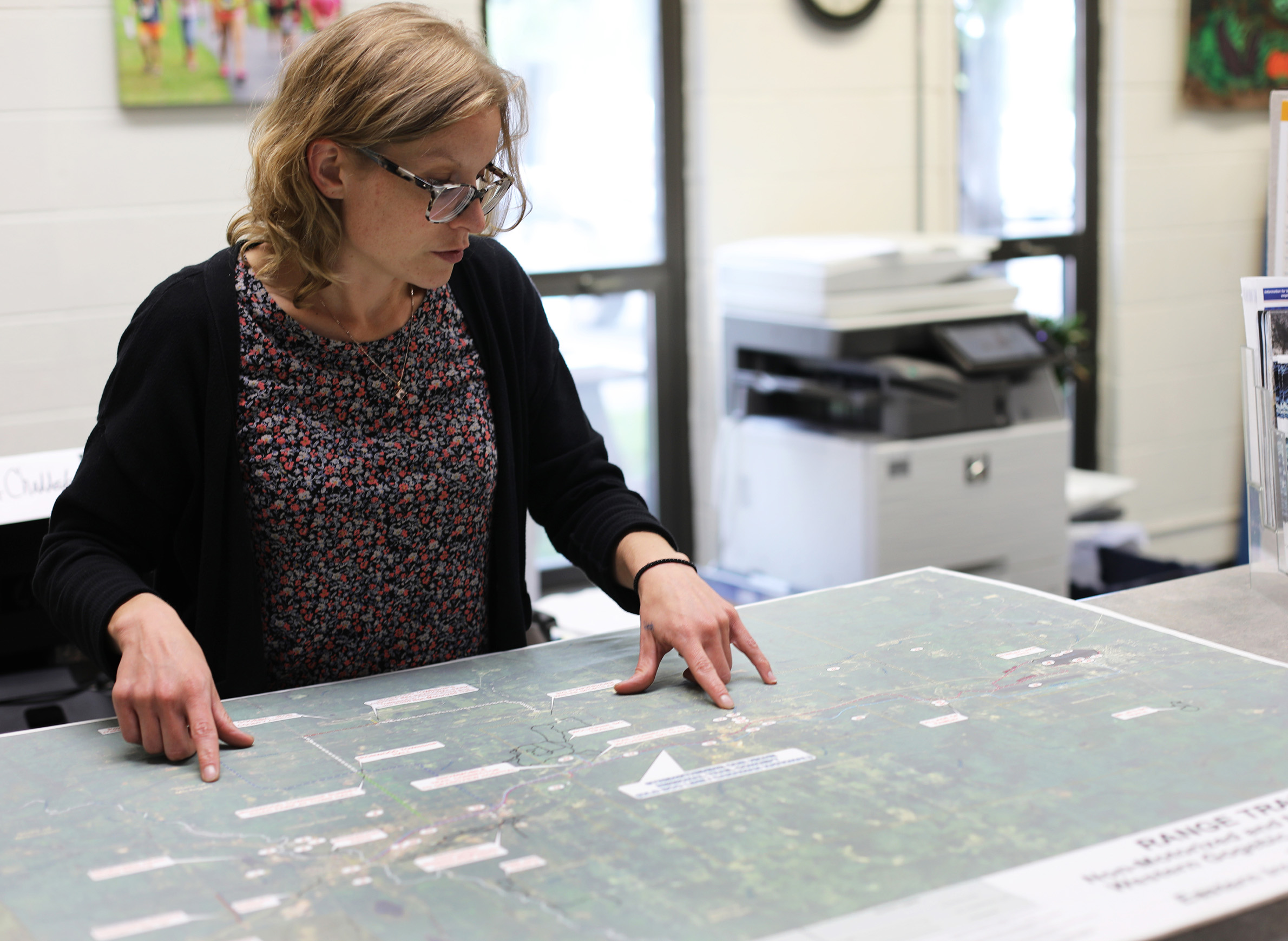 Parker Schorr/Wisconsin Watch
University of Wisconsin-Extension agent Amy Nosal calls it a regional dream: a network of walking, biking, and water trails in Iron County. Community leaders hope the trails will encourage health and the economic development of the area. Photo taken Aug. 28, 2019.

Rita Franzoi, director of the Hurley Area Chamber of Commerce, says the trails serve the dual purpose of improving the local economy, too. The county had seen its population slowly dwindle since the 1920s, but a survey showed that young people have moved to Iron County for its outdoor recreation.

"It's a shift in that people are working to play, they're not living to work," Nosal says. 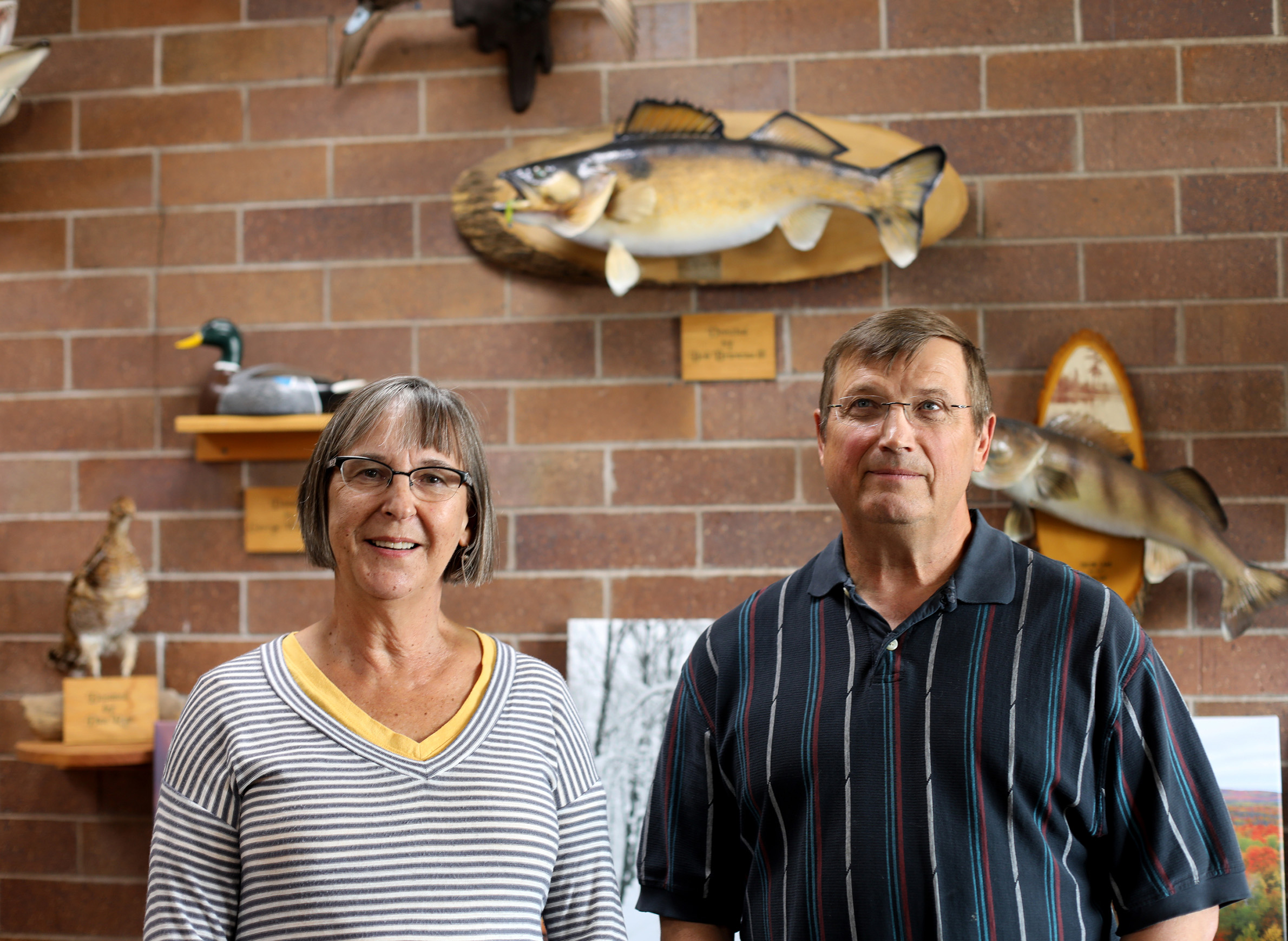 Real estate agents used to get phone calls about what the area's jobs are like, she says. Now, they get questions about trails and where they can paddle their kayaks. It is a new model of economic development. Will Andresen, who leads the local UW-Extension Institute for Community Development office in Hurley, calls it "community gardening."

Traditional economic development uses strategies such as tax incentives for businesses and industrial parks to draw people in search of jobs. Andresen says those efforts garnered some success but were never enough to stanch the bleeding.

He learned over time that there was a different approach, which argues that people are not only lured by jobs but also by environments where people would want to live and launch businesses.

Gardening a rural community means investing in that area's niche. Iron County, known for its large snowfalls and outdoor recreation, has its niche.

"We think it's trails," Andresen says.

Andrea Newby, program director of the Gogebic Range Health Foundation, thinks so too. In one of its first grantmaking cycles, the foundation invested in a local trail project. 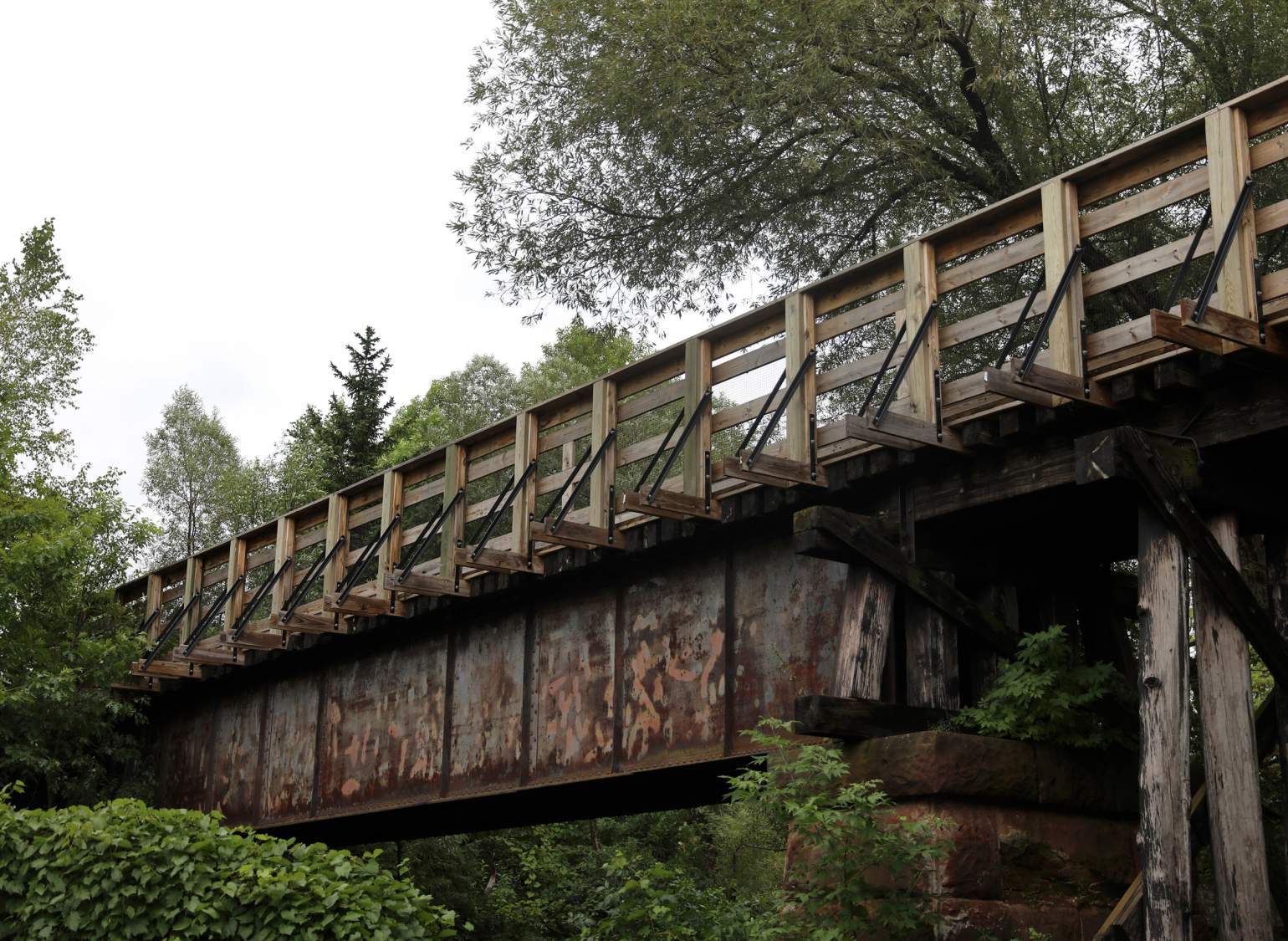 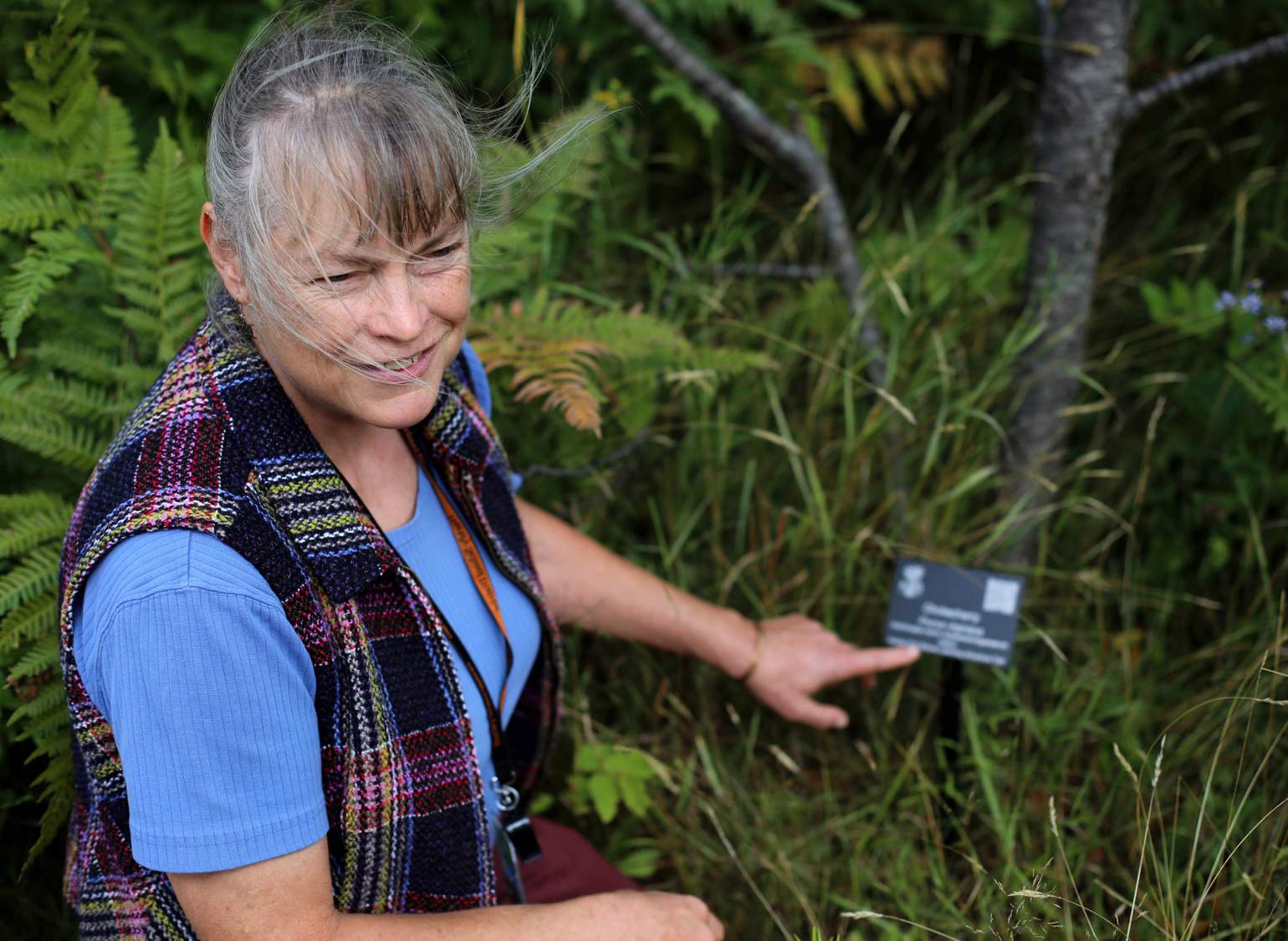 Diane Okrongly, a middle and high school teacher in Hurley is pictured next to a marker on a trail on school property. When the marker’s bar code is scanned, students can learn about the various plants along the trail. Okrongly hopes her students will gain an appreciation for trails and nature, which she says many young people in the community lack. Photo taken Aug. 29, 2019.
Parker Schorr/Wisconisn Watch 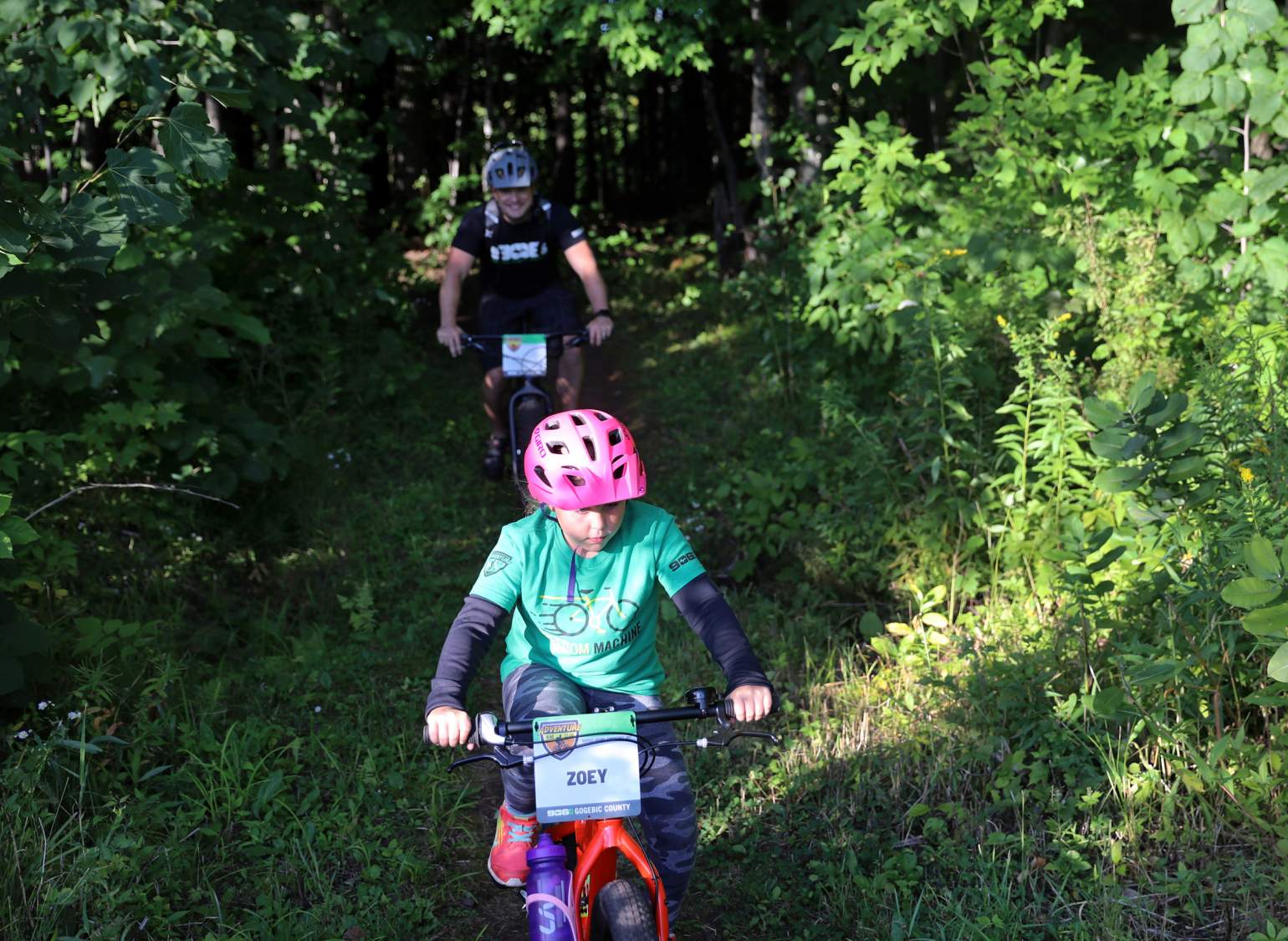 Two mountain bikers ride the trails at Copper Peak in Ironwood, Mich. Although the area has a long history with motorized sports including snowmobiling, officials have begun pushing non-motorized recreation, such as biking and hiking in Ironwood and its sister city Hurley. The riders are on the 906 Adventure Team, a group of area children and parents who bike the area's trails. Photo taken Aug. 28, 2019.
Parker Schorr/Wisconsin Watch

John Eich, director of the Wisconsin Office of Rural Health, said for many rural areas of the state, money, people and jobs have flowed away to urban areas like an “hourglass draining sand.” Vibrant communities maintain their hospitals, he says.

"You go to a rural community that has a small college and you visit their downtown and it feels vibrant. But in another community 20 miles away, it feels like a ghost town," Eich says, adding that at a certain point, a rural community will reach a "tipping point," and then the deterioration speeds up.

"If you had taken a fraction of that amount of money [Foxconn required] and handed out planning grants to all these different economic development organizations … I think that would have had a huge payoff," Deller says.

This report is part of a collaborative project titled "Seeking a cure: The quest to save rural hospitals." It includes the Institute for Nonprofit News and members IowaWatch, KCUR, Bridge Magazine, Wisconsin Watch, Side Effects Public Media and The Conversation, as well as Minnesota Public Radio, Wisconsin Public Radio, Iowa Public Radio, The Gazette, Iowa Falls Times Citizen and N'west Iowa Review. The project was made possible by support from the Institute, with additional support from the Solutions Journalism Network, a nonprofit organization dedicated to rigorous and compelling reporting about responses to social problems. The nonprofit Wisconsin Watch collaborates with Wisconsin Public Radio, Wisconsin Public Television, other news media and the University of Wisconsin-Madison School of Journalism and Mass Communication. All works created, published, posted or disseminated by the Center do not necessarily reflect the views or opinions of UW-Madison or any of its affiliates.

How Can Wisconsin's Rural Hospitals Keep Their Doors Open Amid A Wider Crisis?
What Obstacles Complicate Health Care For Rural Wisconsinites?
The Hazard Of COVID-19 Heading Up North For Summer
Wisconsin's Modest, Uneven Population Growth So Far In The 2010s
Declining Enrollment Intensifies Funding 'Carousel' For Rural Schools