The Life And Times Of Wisconsin's Iconic Blue Book 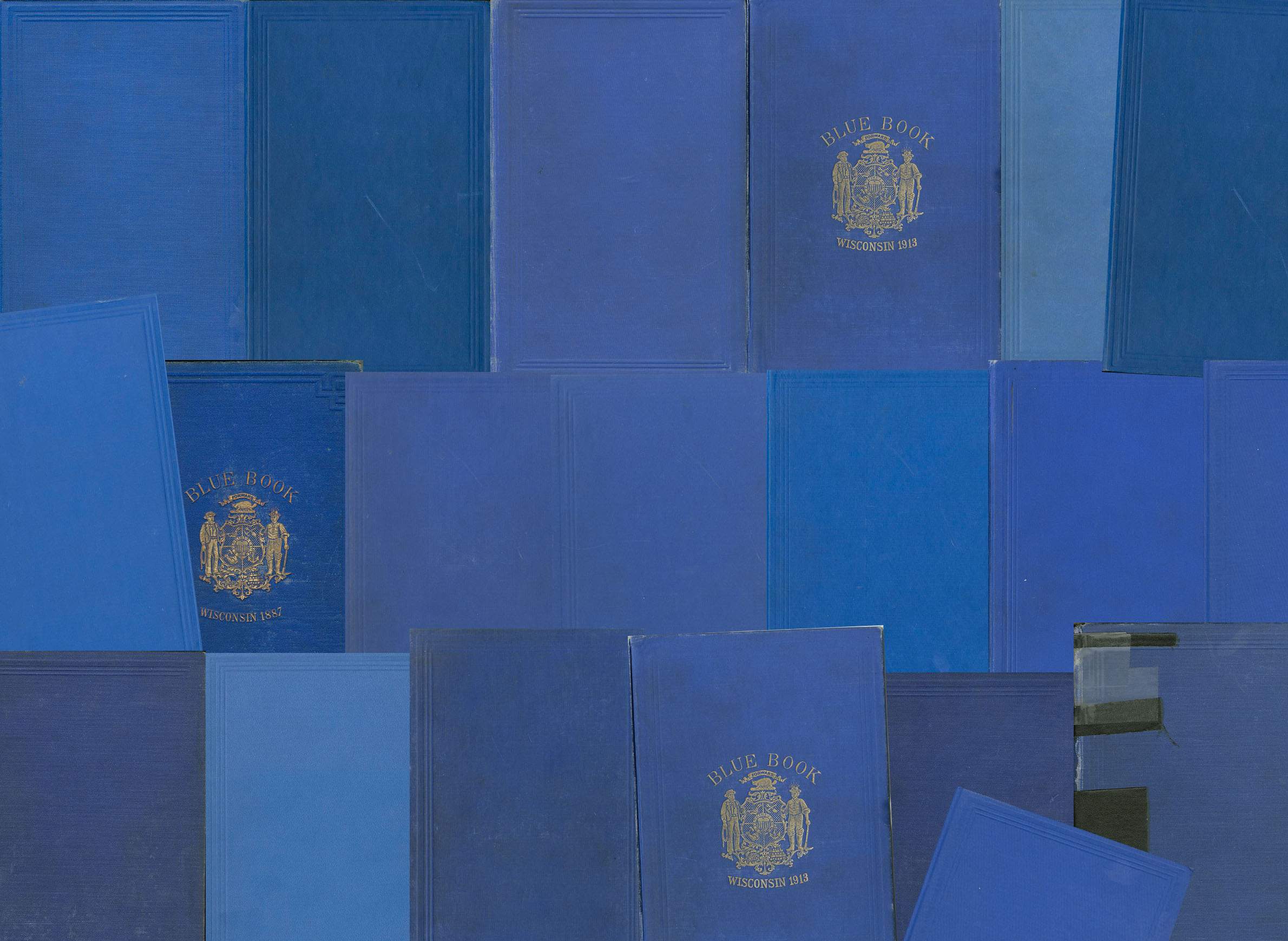 The state of Wisconsin's official "Blue Book" lived up to its moniker for a very long time. The state government began publishing its official compendium of information detailing everything from legislative districts to the state symbols in 1853. For about the first century of its existence, the book was indeed very blue. Sometimes the state seal was stamped in gold into the cover, but many editions up through the mid-1960s are just blue.

As the Wisconsin Historical Society explains, the book "was first published irregularly, then annually from 1879-1883, and biennially since 1885 to the present day." It was intended as a reference manual for lawmakers, who could use it to keep track of rules in the state Assembly and Senate, and to check basic facts about Wisconsin's demographics and geography.

But over the course of its run, the Blue Book has also taken on a broader civic role as a reliable resource for the public and a way to engage citizens, as reflected in features like introductory letters from governors and even feature articles about recent trends and events in state government. The book's 2017-18 edition, for instance, features a 64-page look at the history of women in the state legislature.

It's with the Blue Book's public role in mind that its current publisher, the Wisconsin Legislative Reference Bureau, made some changes. The latest edition is about 300 pages shorter than other recent editions, which ran to nearly 1,000 pages.

The 2017-18 Blue Book still offers a baseline of background information on Wisconsin and its three branches of government, the state constitution, basic statistics about population and election results and biographies of legislators. (As the La Crosse Tribune points out, the photos of legislators are "poorly cropped" — a little headroom, please.) But gone are the Blue Book's dense sections of statistics on employment, agriculture, climate, education, commerce and other facets of life in the state, information that was available in the 2015-16 edition.

In his introduction to the 2017-18 Blue Book, LRB chief Richard Champagne frames these changes as a way to change the book's role in the digital age.

"More information about state government, and more timely information, can be accessed through the Internet than could ever be assembled in one volume by a team of researchers," he writes.

The new edition, Champagne goes on to write, "does not reproduce information that is dated or that can be obtained more easily and accurately elsewhere." He also refers to some of the data included in previous Blue Books as "information peripheral to state and local government." (Many different state agencies have been in charge of publishing the Blue Book over different periods of Wisconsin history, according to the University of Wisconsin-Madison Libraries Digital Collections. The LRB assumed the role in 1966.)

The idea that the internet reduces the need for a reference publication like the Blue Book to get into the weeds with big data sets is a mixed bag. Yes, the internet is rich in data, and data in digital form is easier to analyze through a spreadsheet or other software. In some cases, a digital format makes it simpler to conduct custom searches and analyses for data covering a specific topic, time frame or geographic area.

But it takes a fair degree of digital literacy to make sure a data set is coming from a reliable source, and to understand what that data actually covers. Additionally, government agencies — federal, state, and local — are notorious for having outdated, difficult-to-navigate websites and data search tools. (This reporter navigates such websites frequently, and sometimes finds it hard to figure them out without requesting help from someone at the agency.)

Timeliness is as relevant as accessibility. A large-scale data set covering, say, agricultural production or energy consumption over many decades is updated slowly whether one is accessing it through the internet or in a book. Champagne expressed a concern about publishing "dated" information, but that's an inevitable problem with any printed historical document, especially one covering government: Government officials retire or die, legislative incumbents lose seats, and legislative maps may or may not get struck down in court. The 2017-18 Blue Book, published in May, already contains dated information: Wisconsin Department of Natural Resources Secretary Cathy Stepp left for a job with the EPA, and Rep. Bob Gannon, R-West Bend, died in October.

In addition to a reduction in content, the Blue Book underwent a cosmetic change for 2017-18. Namely, it's a lot less blue.

Under state law (35.24), the spine of the Blue Book must always be blue. This time, the cover has some blue text and borders, but the background is grayish granite in color. Red granite is the state rock, and this choice of imagery honors the celebration of the state Capitol building's centennial. A photograph on the 2017-18 edition's cover shows a group of carvers, in 1911, working on some of the sculptures that now adorn the Capitol.

Wisconsin Public Television's Here & Now looks at these changes in an Oct. 6, 2017 report.

The design choices of the Blue Book didn't remain purist. The design approach seemed to have changed in 1966 — the first year the LRB published the book — with a cover that, while still blue in background, featured a colorful artistic rendering of the state seal.

In contrast to the spirit of streamlining that marks the 2017-18 Blue Book, then-Governor Warren Knowles introduced the 1966 edition in an expansive mood: "This year, to a greater extent than ever before, the Blue Book fulfills the need for helping citizens to better understand and appreciate the problems and functions of their state government. The special feature of the 1966 edition is a comprehensive exposition of every phase and aspect of state government's activities in Wisconsin."

The Blue Book's aesthetic choices gradually expanded. In 1968, it featured a large photograph of the Capitol Rotunda on the front cover and illustration's of Wisconsin's state symbols on the back.

The 1970s brought a few cover photos that look dingy now, of the Capitol grounds or legislative chambers. In 1973, it seems the cover designer was going through a Piper at the Gates of Dawn phase, and 1975 brought a cover that incorporates both painting and collage ideas.

One cover that stands out from the end of the 1970s is from the 1979-80 edition. Both the front and back depict a meeting of the State Building Commission in the Governor's Reception Room at the Capitol.

The front and back cover of the 1979-80 edition of Wisconsin's Blue Book feature a State Building Commission meeting. 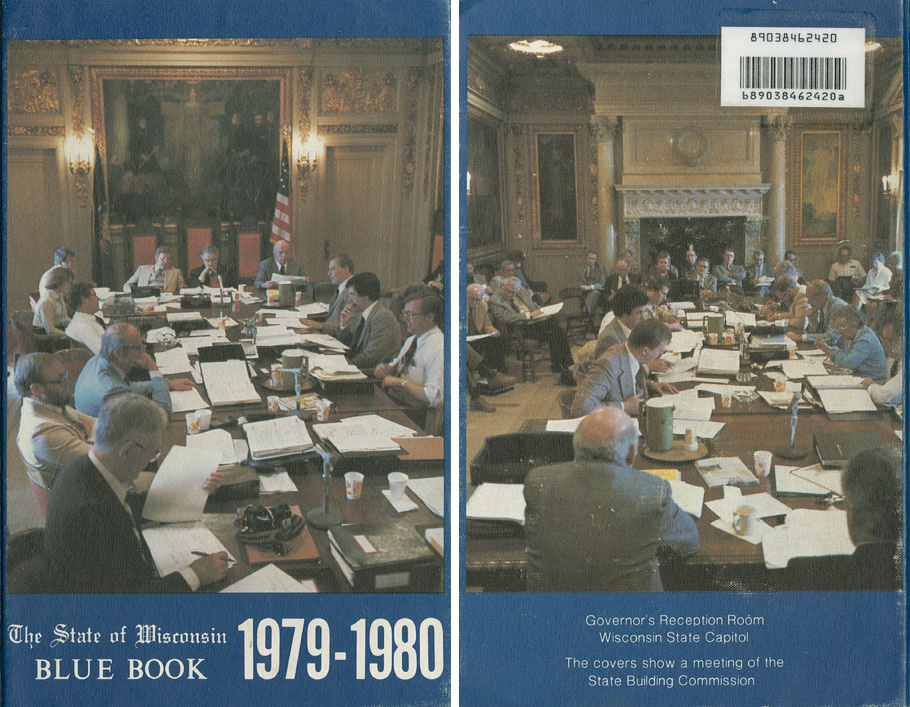 Like other color photographs from that era, these images have a texture and color balance that can look odd to 2017 eyes. Rather than focus in on a state landmark or icon, these are un-posed photos of state officials, almost all of them white men, at work in a conventional setting. Some are shuffling through papers, some are engaged in discussion, some lean back in their chairs with their arms crossed, and some just stare into space. They sit at tables strewn with documents and little paper water cups. But in its own way, this cover is very civic-spirited, an unvarnished look at the often dull and unglamorous work of governing.

Over ensuing decades, the Blue Book settled into the look it's basically maintained up to the present. The 1985-86 and 1995-96 editions highlight this transition, featuring images of the Capitol, presented in a mild aesthetic that makes it resemble a school textbook. The LRB says another reason for the 2017 redesign is to make the book more accessible to high school civics classes, and that focus on informing a younger generation reflects yet another subtle evolution on the book's civic role.