The 'New Normal' Of Erratic Water Levels On The Great Lakes 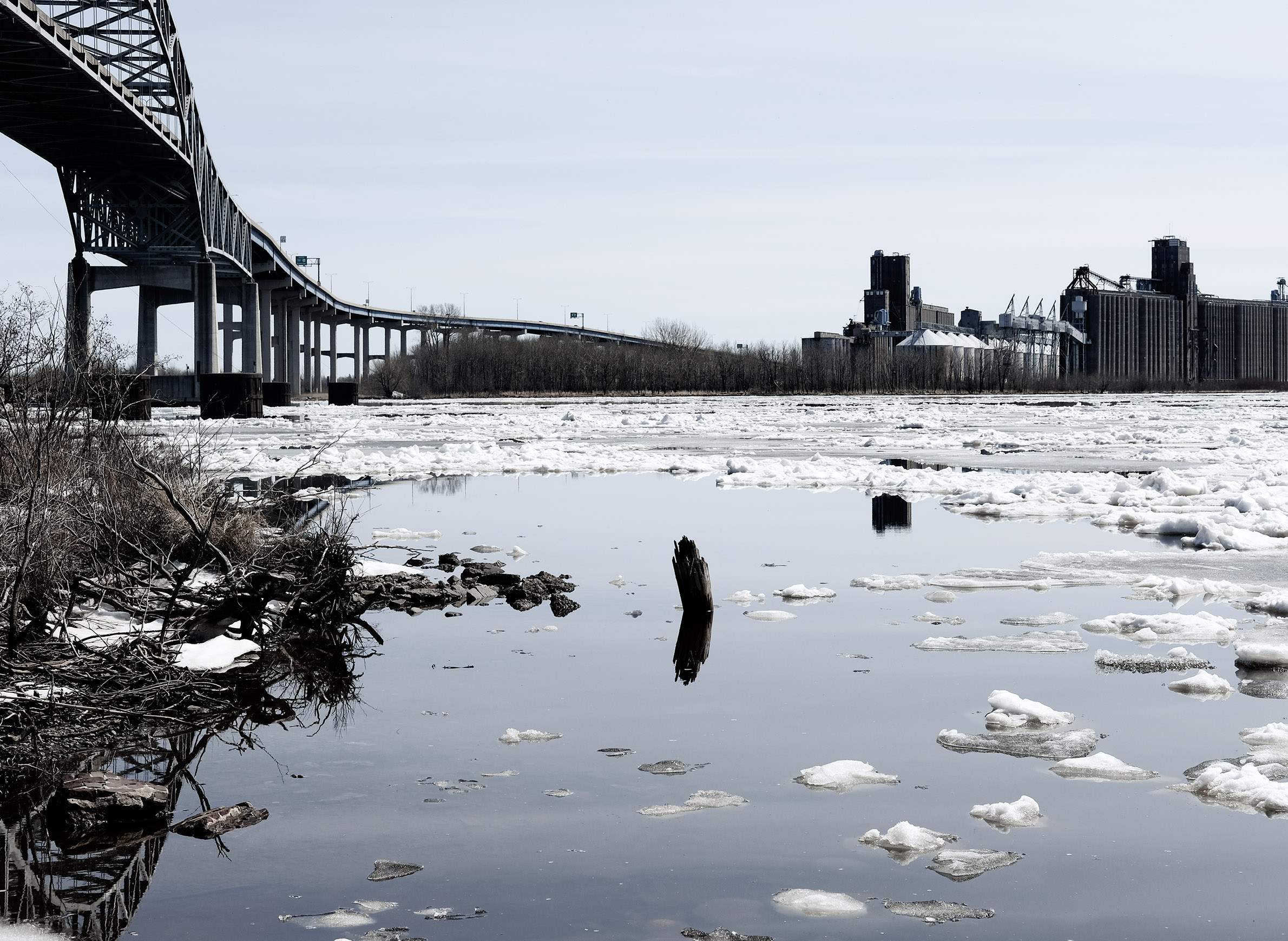 Sharon Mollerus (CC BY 2.0)
Melting snow and ice fill the waters of Saint Louis Bay underneath the Blatnik Bridge connecting Superior, Wis. and Duluth, Minn. at the western tip of Lake Superior.

The North American Great Lakes contain about one-fifth of the world's surface fresh water. In May 2019, new high water level records were set on Lakes Erie and Superior, and there has been widespread flooding across Lake Ontario for the second time in three years. These events coincide with persistent precipitation and severe flooding across much of central North America.

As recently as 2013, water levels on most of the Great Lakes were very low. At that time some experts proposed that climate change, along with other human actions such as channel dredging and water diversions, would cause water levels to continue to decline. This scenario spurred serious concern. Over 30 million people live within the Great Lakes Basin, and many depend directly on the lakes for drinking water, industrial use, commercial shipping and recreation.

But since 2014 the issue has been too much water, not too little. High water poses just as many challenges for the region, including shoreline erosion, property damage, displacement of families and delays in planting spring crops. New York Gov. Andrew Cuomo declared a state of emergency on May 20 in response to the flooding around Lake Ontario while calling for better planning decisions in light of climate change.

As researchers specializing in hydrology and climate science, we believe rapid transitions between extreme high and low water levels in the Great Lakes represent the "new normal." Our view is based on interactions between global climate variability and the components of the regional hydrological cycle. Increasing precipitation, the threat of recurring periods of high evaporation, and a combination of both routine and unusual climate events – such as extreme cold air outbursts – are putting the region in uncharted territory. 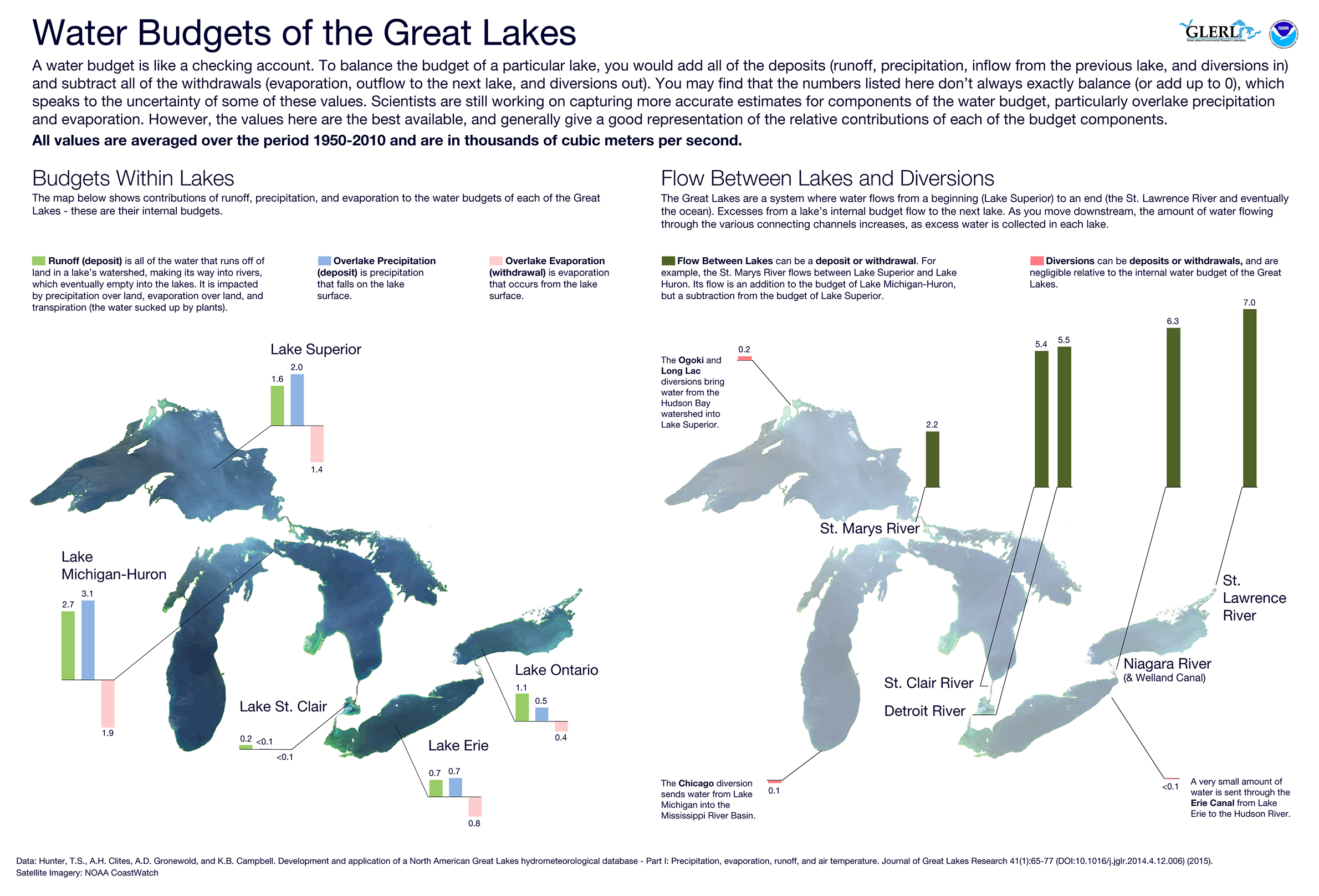 NOAA Great Lakes Environmental Research Laboratory
Changes in the water budgets of the Great Lakes affect their water levels from year to year.

These extremes result from changes in the Great Lakes' water budget – the movement of water into and out of the lakes. Water levels across the lakes fluctuate over time, influenced mainly by three factors: rain and snowfall over the lakes, evaporation over the lakes, and runoff that enters each lake from the surrounding land through tributaries and rivers. Runoff is directly affected by precipitation over land, snow cover and soil moisture.

Interactions between these factors drive changes in the amount of water stored in each of the Great Lakes. For example, in the late 1990s surface water temperatures on Lakes Superior and Michigan-Huron rose by roughly 2°C. Water evaporates more rapidly when it is warmer, and during this period evaporation rates were nearly 30% above annual average levels. Water levels on Lake Michigan-Huron dropped to the lowest levels ever recorded. 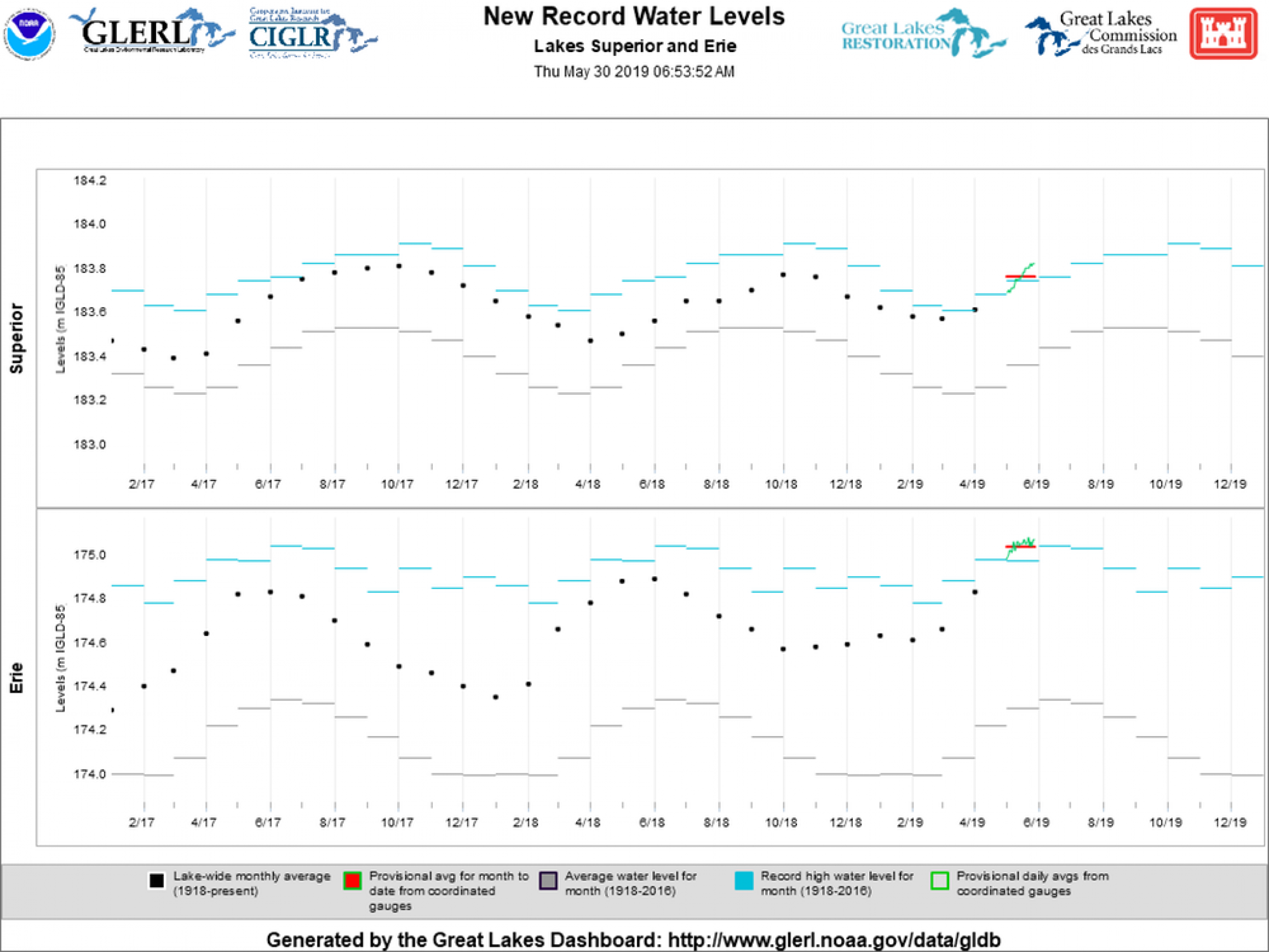 Great Lakes Environmental Research Laboratory/University of Michigan Cooperative Institute for Great Lakes Research (CC BY-ND 4.0)
Monthly water levels on Lake Superior and Lake Erie from the beginning of 2017 through April 2019 are indicated by black dots. Blue bars mark the record high for each calendar month, and gray bars are the record lows. Water levels for May 2019 are presented as a red bar for clarity. This chart was developed using the Great Lakes Dashboard maintained by the National Oceanic and Atmospheric Administration.

Then in 2014 the Midwest experienced an extraordinary cold air outbreak, widely dubbed the "polar vortex." The lakes froze and evaporation rates dropped. As a result, water levels surged. 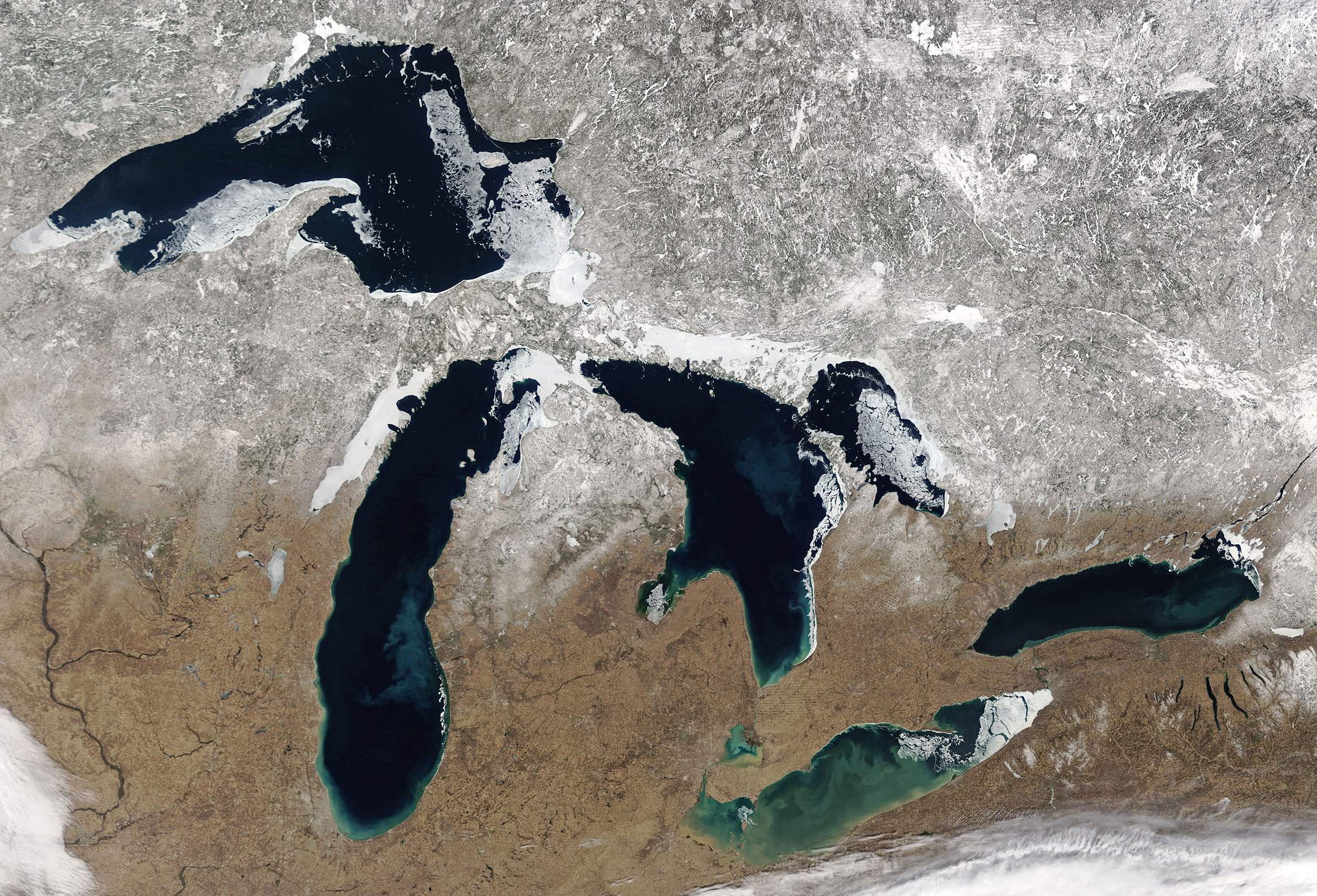 Joshua Stevens/NASA Earth Observatory
Runoff from melting snow that accumulates around the Great Lakes each winter, as seen on March 25, 2019, is one element of the their water budget.

What do these trends mean for water levels?

In addition to the current onset of record highs, water levels in Lake Erie have been rising earlier in spring and declining earlier in fall. More winter precipitation is falling, often as snow. The snow is melting earlier in response to rising temperatures and shorter winters. The resulting runoff is then amplified in years like 2019 with large springtime rains. The net effect of this combination of hydrological events is that Lake Erie’s current water levels are much higher than usual for this time of year.

The role of climate change

Great Lakes water levels have varied in the past, so how do we know whether climate change is a factor in the changes taking place now?

Precipitation increases in winter and spring are consistent with the fact that a warming atmosphere can transport more water vapor. Converting water from vapor to liquid and ice releases energy. As a result, increased atmospheric moisture contributes to more precipitation during extreme events. That is, when weather patterns are wet, they are very wet. 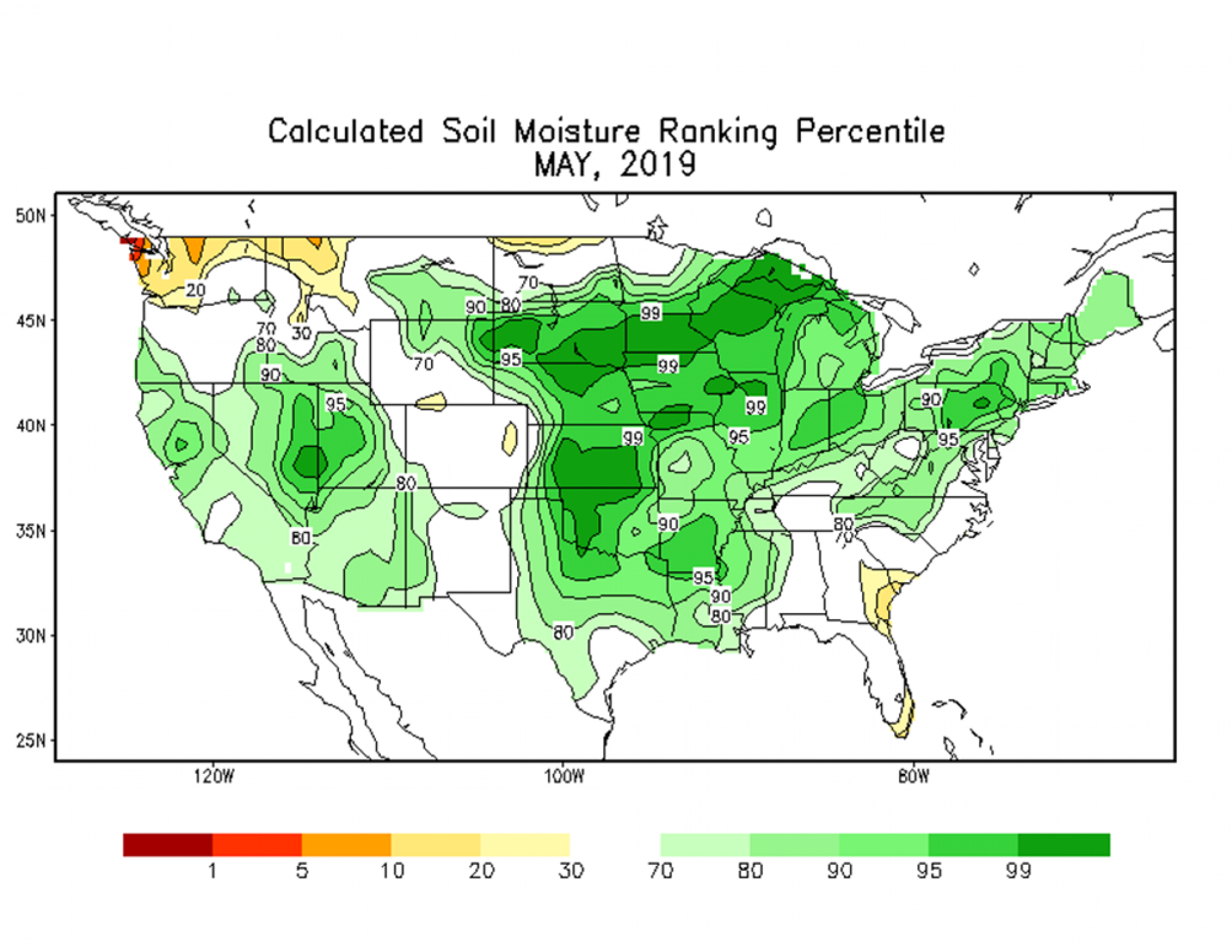 National Oceanic and Atmospheric Administration
Soils in most of the Great Lakes states were extremely wet in May 2019, as calculated by the National Weather Service Climate Prediction Center. For example, in 99th percentile zones, soil moisture is higher than 98% of the entire historical record.

Changes in seasonal cycles of snowmelt and runoff align with the fact that spring is coming earlier in a changing climate. Climate models project that this trend will continue. Similarly, rising lake temperatures contribute to increased evaporation. When weather patterns are dry, this produces lower lake levels.

Wet and dry periods are influenced by storm tracks, which are related to global-scale processes such as El Niño. Similarly, cold air outbreaks are related to the Arctic Oscillation and associated shifts in the polar jet stream. These global patterns often have indirect effects on Great Lakes weather. It is uncertain how these relationships will change as the planet warms.

Rapid changes in weather and water supply conditions across the Great Lakes and upper Midwest are already challenging water management policy, engineering infrastructure and human behavior. We are undoubtedly observing the effects of a warming climate in the Great Lakes, but many questions remain to be answered.

Innovative techniques, such as incorporating information from snow and soil moisture maps into seasonal water supply forecasts, can help capture a full picture of what is happening to the water budget. The bigger point is that past conditions around the Great Lakes are not a reliable basis for decision-making that will carry into the future.

This article was originally published on June 4, 2019 by The Conversation. Drew Gronewold is an associate professor of environment and sustainability at the University of Michigan. Gronewold previously received funding as a former federal employee from the National Oceanic and Atmospheric Administration and the International Joint Commission. He holds an adjunct appointment with the University of Michigan Department of Civil and Environmental Engineering. Richard B. Rood is a professor of climate and space sciences and engineering at the University of Michigan. Rood receives funding from the National Oceanic and Atmospheric Administration. He is co-principal investigator of the Great Lakes Integrated Sciences and Assessment Center.

A Retired Snowmobile Racer Shows Off His Collection Of Classic Sleds
A Mother And Daughter Friendly Debate: Is There A Place For Macaroni In Chili?
Snow Makers Keeping Wintertime Fun
A Semi-Pro Football Team That Always Drew A Crowd: The Little Chute Flying Dutchmen
Bridging the “Cold War” Divide