The Stubborn Similarity Of Gas Prices Across Eau Claire 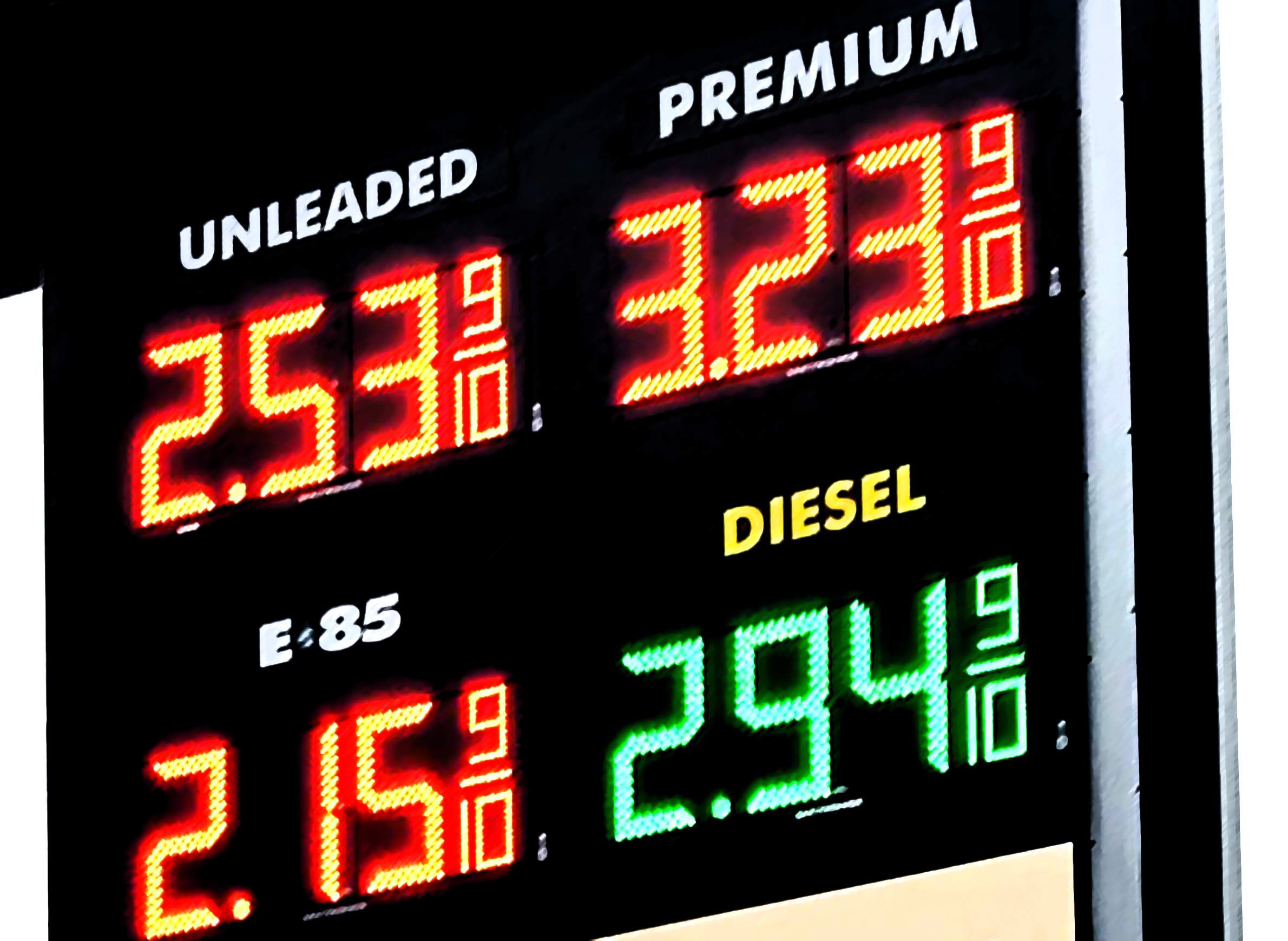 Confusion over what drives differences in gas prices between gas stations in the same town ⁠— or even at the same intersection ⁠— can be a constant source of frustration for drivers. Depending on the pricing system in a state, gas prices at one station can be nearly $0.30 different from those at another across the street.

However, this potential for different prices is not the case in Wisconsin. Rather, confusion and frustration can flow from the fact that gas prices at neighboring stations are more likely than not to be very similar, or even identical. It's in large part the result of one law, dating back to the Great Depression, that has had not only an impact on the price of a gallon of gas, but also on how many gas stations are in a community and where they are located.

In 2011, this frustration came to a head for one member of the Eau Claire City Council. The late and longtime city council member David Duax had long believed the price of gasoline was much higher in Eau Claire than other communities in the region. Starting from this hunch and a litany of anecdotes implying that collusion between gas station owners and gasoline distributors was the cause, the city of Eau Claire asked the Wisconsin Department of Justice to investigate these claims.

The ensuing study, released in December, 2011, would elicit stories of secret meetings between gas station owners to fix prices, death threats for exposing secrets, and Eau Claire's proximity to the nearest pipeline as the main culprits for higher prices. But in the end, the state Department of Justice's brief study found no evidence of any conspiracy or illegal activities that would be causing higher gas prices in the Eau Claire area.

Retail prices for a gallon of gasoline in the United States are determined through four primary factors: wholesale costs, local market conditions, federal taxes and state taxes. Apart from the 18.4 cent federal gas tax in place in 2019, both state taxes and wholesale prices differ state to state.

The following map illustrates the combined state and federal gas taxes for all 50 states. The lowest state tax is in Missouri at 17.42 cents per gallon, and the highest is 61.2 cents in California. Wisconsin falls below the middle of that range, with a gas tax of 32.9 cents. 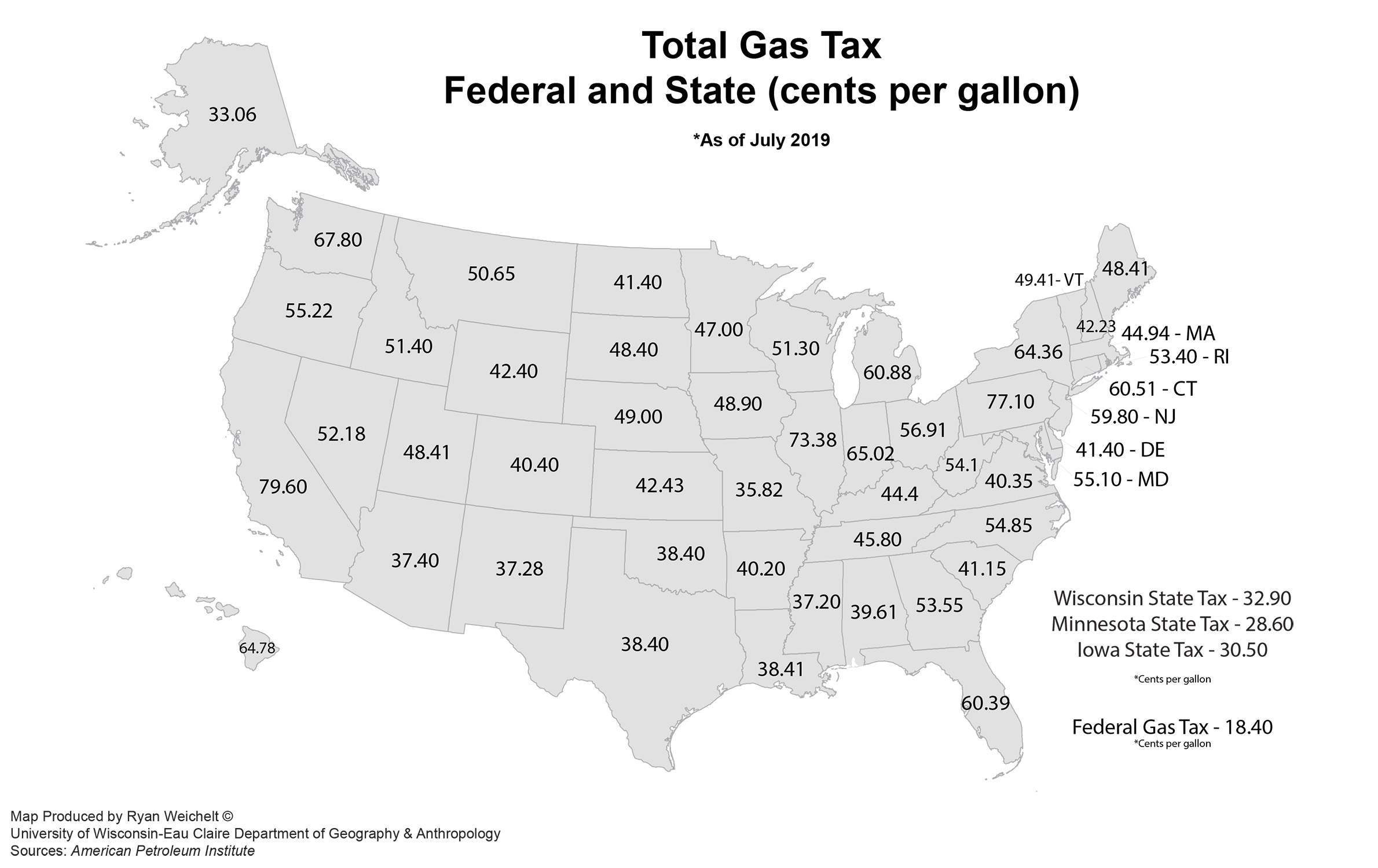 Retail gasoline prices in Wisconsin are also influenced by a Depression-era law named the Unfair Sales Act, which was enacted in 1939 and applies to a variety of merchandise. As applied to motor vehicle fuel, including gasoline, it is known as the "minimum markup law," and adds additional layers to the pricing system for gasoline.

The goal of this law is to protect smaller retail businesses against predatory pricing from larger competitors that could sell a product below its cost. The law accomplishes this goal by stipulating that retailers are required to sell products at a price that is a minimum level above its cost. This markup is either 6% above certain costs or 9.18% over the average wholesale price, whichever is greater.

Violators of the law are subject to a variety of fines until the price is increased to fit the markup criteria. These penalties generally give retailers an incentive to set prices high enough to ensure they do not fall below the "minimum markup," leading to rather uniform prices across a given geographic area.

Since the inception of the minimum markup law in 1939, numerous attempts to repeal it have been pursued and subsequently thwarted. The most recent effort was through the the 2019-21 Wisconsin state budget.

Democratic Gov. Tony Evers proposed to eliminate the minimum markup law and raise gas taxes (by 8 cents) at the same time to help pay to repair the state's crumbling roads. Evers argued that with the elimination of the law, gas prices fall to such a level that an increase in the gas tax would not equate to higher overall prices at the pump. Though many Republicans have also argued for eliminating the minimum law, they did not support raising the gas tax. In the end, both the elimination of the law and gas tax increase were removed from the budget, which was instead passed and signed with an increase in vehicle registration fees. 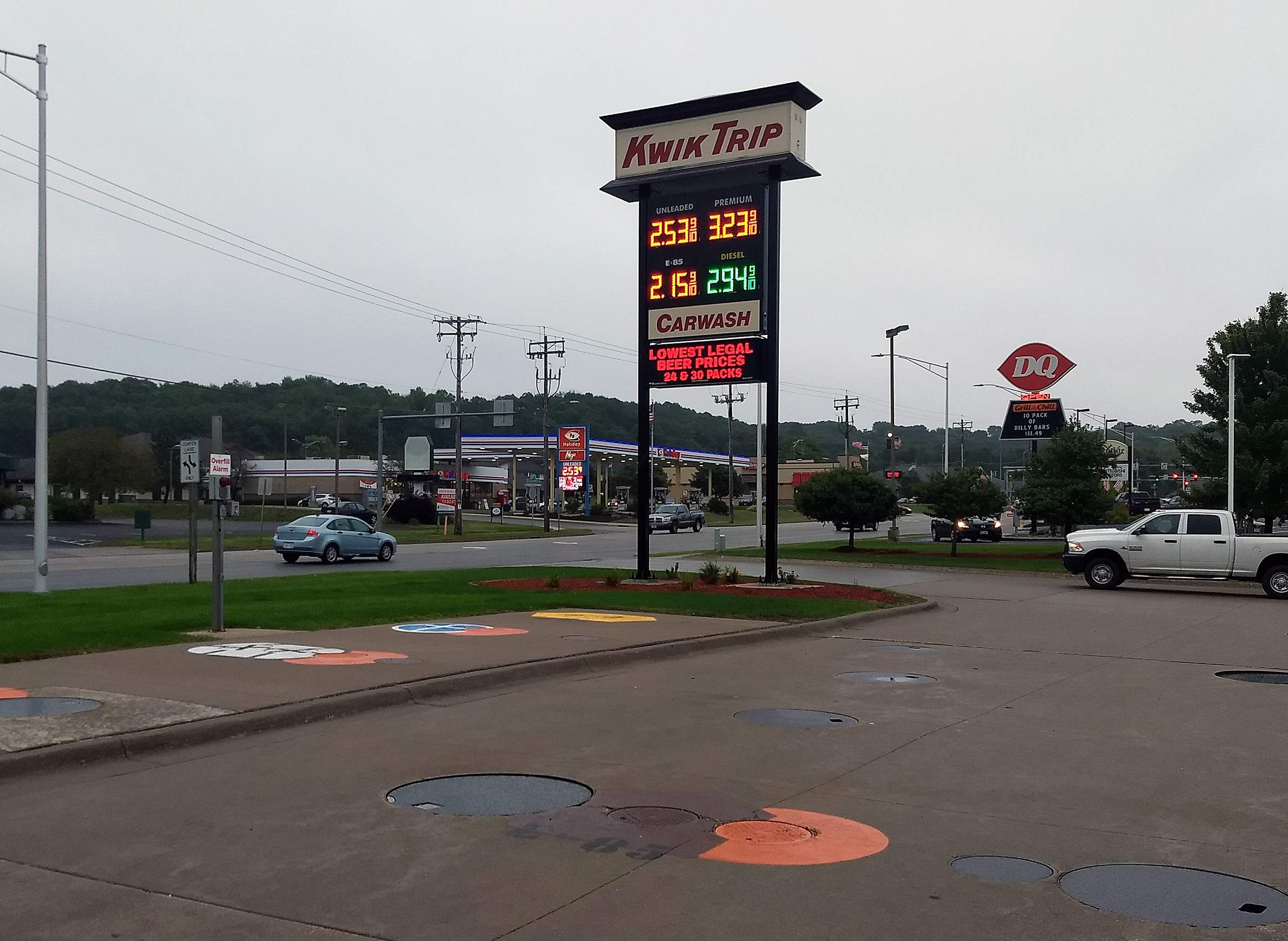 Ryan Weichelt
The prices of a gallon of gas at a Kwik Trip and Holiday located across the street from each other on Golf Rd. in Eau Claire are identical, reflecting the minimal price variation found in the city for the product. Photo taken Sept. 13, 2019.

Back in 2012, David Duax would not take "no" for an answer. After the state's report was released, the Eau Claire City Council requested another study to examine possible reasons as to why gas prices in the city were higher than elsewhere around the region. This research, which we conducted with two University of Wisconsin–Eau Claire students, Ben Possi and Emily Anderson, found that a combination of different factors— state law, geography and market saturation — were responsible for consistently high and rather uniform retail gasoline prices routinely observed in the city

The study examined 10 cities of similar size and locations along major highways in Wisconsin, Minnesota and Iowa. The two states to the west were selected as they do not have a markup law like Wisconsin’s, and because both states have different gas taxes. That is, these states would provide differentiated conditions for comparison to Wisconsin.

Initial findings in 2012 indicated Wisconsin cities generally had higher retail gas prices compared to those in Iowa and Minnesota, due to higher state gas taxes and limitations on competitive pricing strategies resulting from the minimum markup law. Over a 20-week pricing period, the price variation between competing gas retailers in Eau Claire differed by an average of just 1.7 cents per gallon. In Iowa and Minnesota, gas retailers are free to charge any prices, which meant some cities had average variations between 6 to 22 cents per gallon.

When examining the profit margin for gasoline sales, which is the difference between gas purchased at the wholesale price and what is sold at the retail price, excluding taxes, a similar pattern emerged. Eau Claire gas stations saw nearly uniform profit margins compared with a greater variation in profit margins for gas stations located in Minnesota and Iowa cities. What emerged as a key difference for these retail gasoline markets were levels of direct competition between businesses, and how many (or few) were operating in a given city, which is known as market concentration.

As measured by the Herfindahl-Hirshman Index, a common gauge of business concentration in a given market, the level for gas stations in Eau Claire was around the highest of the 10 cities at 0.24. That measure is close to the index benchmark value of 0.25, suggesting a highly concentrated (and potentially non-competitive) market. Meanwhile, St. Cloud, Minn. was the lowest at 0.13. Three of the four Wisconsin cities examined exhibited higher index values than cities in Iowa or Minnesota. (The data for Mason City was incomplete which contributed to its Herfindahl-Hirschman Index measure.)

The resulting high index value for Eau Claire is driven by two retailers that dominate gas sales: Kwik Trip and Holiday. In 2012, these two firms controlled 60% of Eau Claire's gasoline market. For comparison, the two largest retailers in St. Cloud accounted for only 39% of its local gas retail market.

Based in La Crosse and growing rapidly in the region, Kwik Trip has vocally supported Wisconsin's minimum markup law. The company has developed a niche business strategy through selling groceries and prepared food to help lure customers into their upward of 700 gas stations across the Badger State, as well as in growing swaths of Minnesota and Iowa. Holiday Stationstores, meanwhile, is based in Minnesota and operates more than 500 stations in 10 states.

Though the minimum markup law was meant to protect smaller firms from being outpriced, the domination of Eau Claire's gasoline market by two firms contributed to the small variation in prices.

In Eau Claire and elsewhere around Wisconsin, due to the fact that gas prices are just about the same anywhere in the market, there is little incentive for new competitors to open up shop and little incentive for customers to travel extra distances to take advantage of lower prices. Therefore, gas stations are relatively spread out across the landscape in Wisconsin communities compared to other states. Additionally, Wisconsin has a lower density of gas stations than states without this type of law.

In 2015, the Janesville-based grocery store chain Woodman's entered the market. Woodman's set its gas prices to the lowest levels allowed by the minimum markup law. A class of retailer termed by the Federal Trade Commission as a "hypermarket," Woodman's is willing to take smaller margins on gasoline to entice people to buy its groceries. Two years later, Brainerd, Minn.-based Fleet Farm also entered the Eau Claire market and engaged in a similar practice. (Fleet Farm subsequently moved to consolidate its headquarters in Appleton in 2019.) These entries prompted gas stations within a very close proximity to either Woodman's or Fleet Farm to lower their prices to avoid losing customers.

Yet, the Eau Claire gasoline market is even more concentrated than it was at the beginning of the 2010s. Despite the arrival of Woodman's and Fleet Farm, Kwik Trip and Holiday control nearly 73% of the market in 2019. This pushes the city's Herfindahl-Hirschman Index measure to .308, suggesting the market remains non-competitive, even though Woodman's and Fleet Farm had an immediate impact on nearby gas prices.

The following map shows the more than three-dozen gas stations in Eau Claire and neighboring Altoona, along with gas prices as of Sept. 5, 2019. 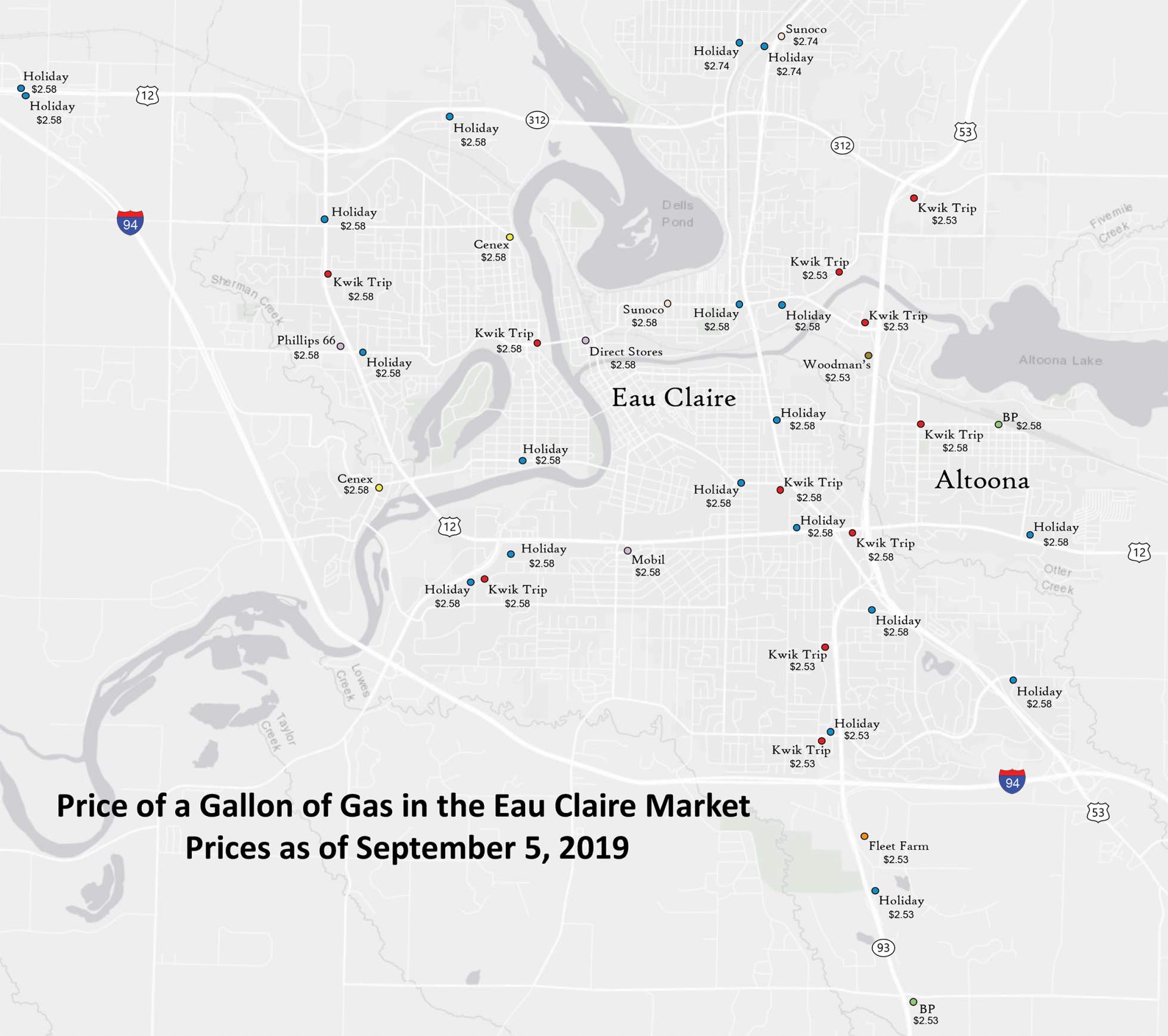 Ryan Weichelt
A map of gasoline station locations in Eau Claire and Altoona on Sept. 5, 2019 shows similar prices for a gallon of gas around the market, with variations mirrored among neighboring sellers.

For residents of Eau Claire and in communities across Wisconsin, the state's minimum markup law has both geographic and financial impacts. The uniformity of prices results in market saturation of only a few competitors because consumers are not persuaded to travel larger distances for cheaper gas because the prices are the same or nearly the same.

The study, while not substantiating the initial claims of collusion, would influence the city of Eau Claire's policies related to gas stations. For several years, the city did not allow the construction of any new gas stations by current competitors within the city limits. In 2014, Kwik Trip attempted to build in the city but was subsequently denied; the company, as well as Woodman's, would eventually build in neighboring Altoona instead.

It wasn't until 2018 with the arrival of Fleet Farm that the city of Eau Claire would see a new gas station. Up next is Iowa-based Casey's General Stores, which follows a similar business strategy as Kwik Trip and has been given the green light by the Eau Claire Planning Commission to build a new store on the city's west side. Given how the minimum markup law works, though, residents of Eau Claire and Wisconsin as a whole will continue to be charged gas prices that are more uniform than those in neighboring states.