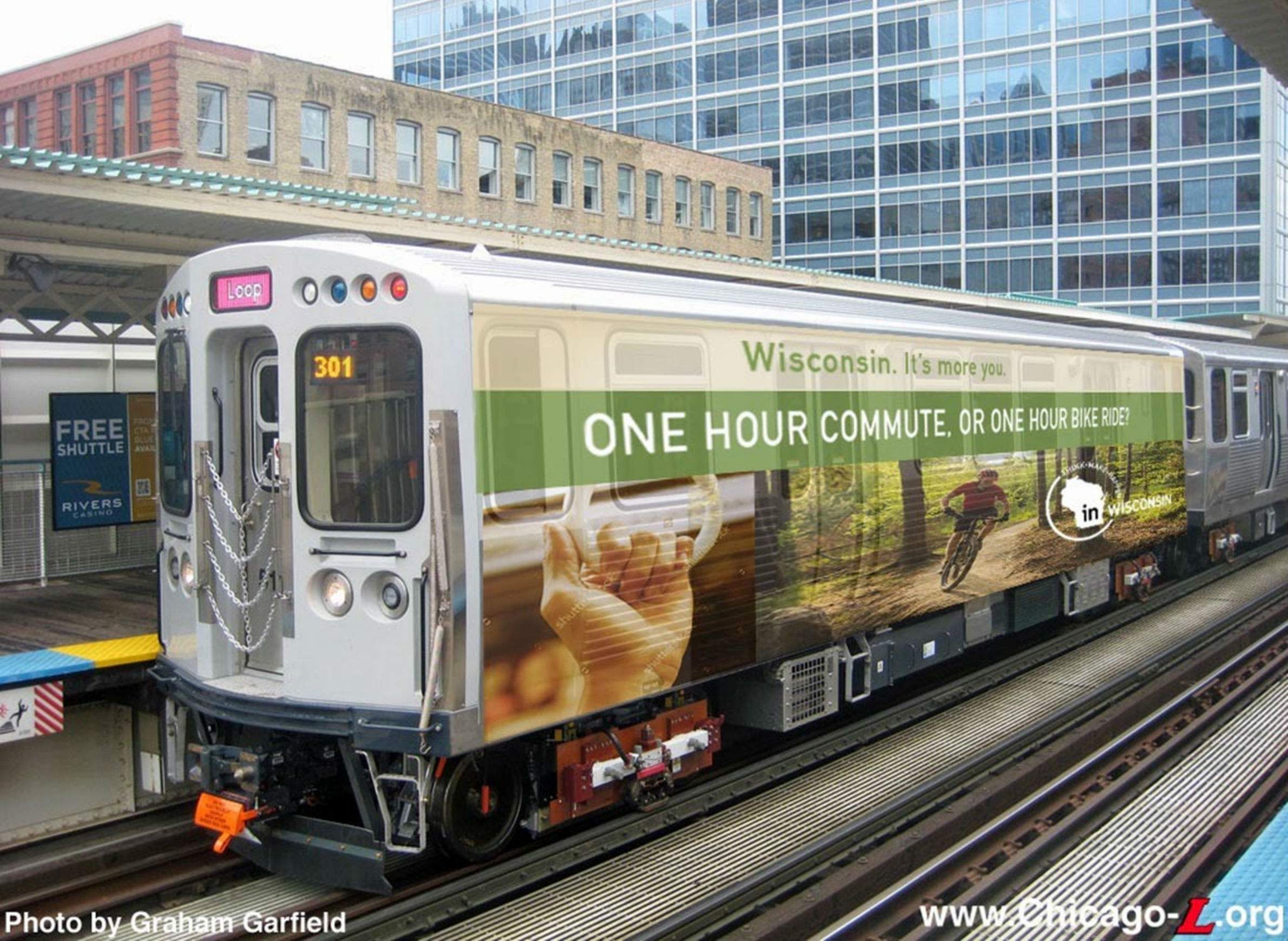 Gov. Scott Walker and state economic development officials want to spend about $7 million on a marketing campaign to entice young, college-educated workers to move to Wisconsin. However, advertising to such prospective residents — insert media punditry about "millennials" and chamber-of-commerce shorthand on "young professionals" here — does not necessarily mean the state is providing the economic opportunities and lifestyle conditions they supposedly want.

The Wisconsin Economic Development Corporation would be carrying out the ad campaign, which would include TV spots and transit ads targeting major media markets in neighboring states, including Chicago, Minneapolis and Detroit. They'd be aimed not just at younger workers in general, but also at more specific categories, namely veterans and people who left Wisconsin after attending college in the state. The campaign would start in January 2018, with $1 million that has already been set aside for it; for the rest of the money, WEDC will be awaiting an allocation from the state legislature.

The state is indeed facing a deficit in younger workers. Large swaths of Wisconsin are aging fast and that the state is struggling to attract younger workers, especially those from out of state. One popular narrative has it that Wisconsin's educational system simply don't give students the skills that companies in the state need, particularly manufacturing firms, creating what's called a "skills gap" and need for more training. But evidence suggests that young workers have preferred in recent years to take to other states with bigger cities and more robust labor markets. This migration trend might be starting to slow, but that forecast is contentious.

The WEDC ad campaign's pitch, as explained in a Dec. 8, 2017 report on Wisconsin Public Television's Here & Now, is all about cost of living and an assumption that young workers living in Wisconsin will have more leisure time than their counterparts in the big city.

A TV spot aimed at the Chicago market portrays a couple dolefully cooking up dried ramen noodles in their apartment, presumably in Chicago, then stepping out for a beautifully presented meal of upscale ramen — complete with luscious meat, hard-boiled egg and radish slices — apparently in Milwaukee. Other proposed ads show people biking on trails and stand-up paddleboarding on lakes, in apparent contrast to the misery of a big-city commute.

But how does Wisconsin fit into young, college-educated people's ideas about their futures?

In its report, Here & Now spoke with a handful of current University of Wisconsin-Madison students. Most in-state college graduates do in fact stick around, yet it's not clear how many buy the idea of Wisconsin as an especially exciting place for young professionals. Family ties and a host of other factors can contribute to a young person staying closer to home.

One student hinted at more of a long-term, settle-down appeal.

"Not a lot of people are sticking around," said Riley Farrell in an interview at Grainger Hall, home of UW-Madison's School of Business. "I want to start out my career in a big city, just to get the feel of a different kind of lifestyle and see more things, I guess, than what Wisconsin has to offer. But I want to come back for sure. It's always been my home."

Another student, Ryan Monfils, spoke to Here & Now about the draw in larger metro areas of career opportunities and "activities to do that are just not basic like a walk in the park, like concerts, sporting events."

Students are thinking as seriously as state officials about the jobs picture considering it's their own careers on the line.

"I'd prefer to leave, to be brutally honest, but it really depends on where I'm able to get a job," said student John Douglas. "I'd prefer to go back either to D.C. or L.A. or somewhere like that."

Perhaps a hectic commute — on the choked roads of a sprawling city like Los Angeles, or the buses and trains of a compact one like Washington D.C. — isn't that big of a turn-off after all.

Some of the ads that WEDC wants to run on Chicago Transit Authority trains and platforms frame public-transit commutes as degrading and bothersome.

"In Wisconsin, you'd be home by now," reads one ad mockup for screens on CTA platforms. But public opinion research suggests that the target audience for these ads — so-called "millennials" — find value in public transit.

The state's ad campaign focuses in part on headaches associated with commuting on mass transit systems. 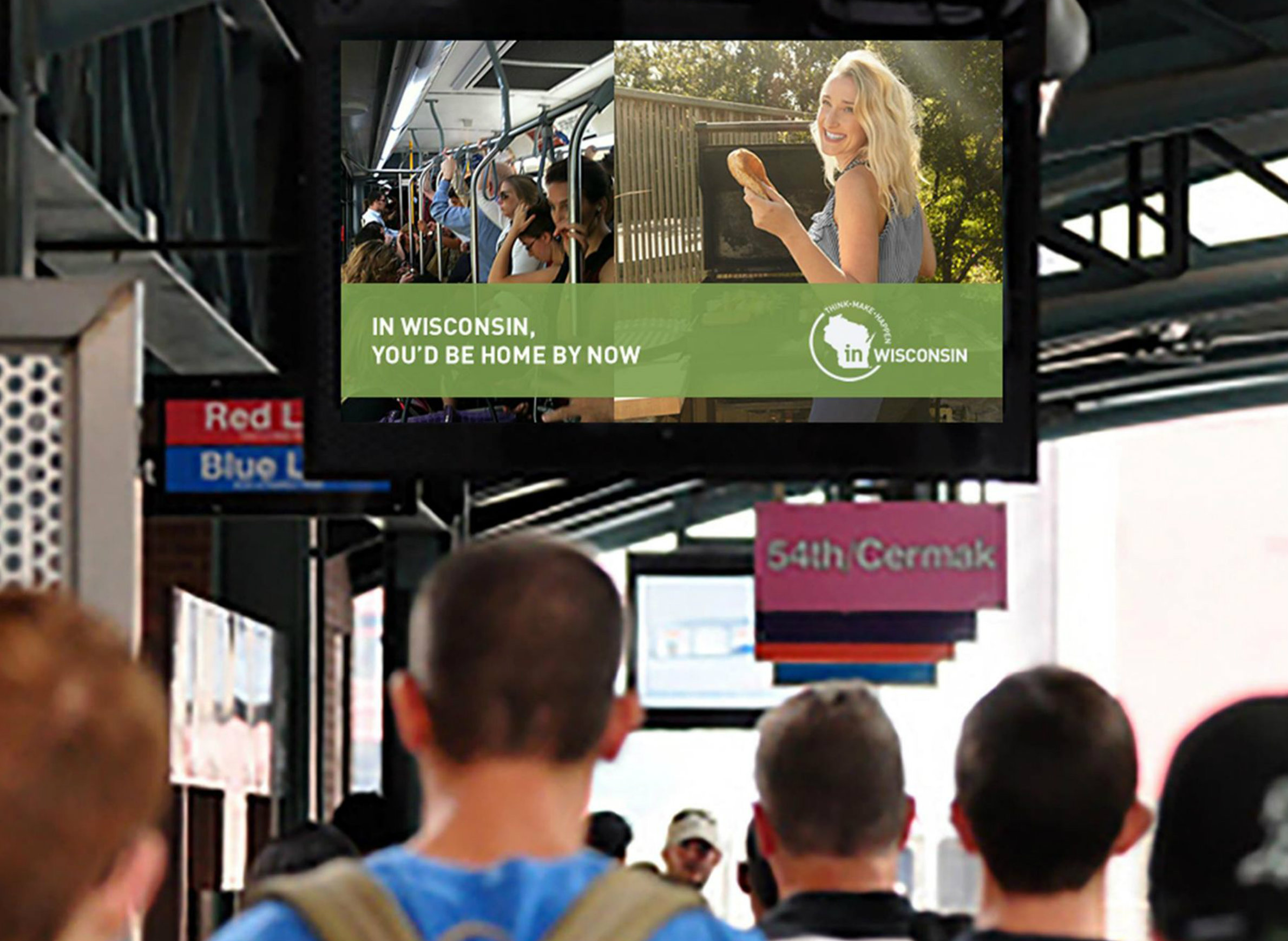 When it comes to transportation, the state's proposed ad campaign possesses a several layers of irony. On of Walker's earliest actions was to pull the state out of a proposed rail project connecting Milwaukee and Madison, which helped raise his national prominence as a Republican leader. Since then, Walker and Republican majorities in the state legislature have cut funding for public transit, all the while sinking more money into roads. With this ad campaign, Wisconsin would be helping to fund public transit — in other states.

Other ads WEDC is aiming at Chicago transit riders contrast the misery of being a straphanger with images of idyllic trail-bike rides in Wisconsin, something a younger worker would presumably have more time to do given that commutes in the state tend to be shorter. Young people may certainly enjoy recreational activities like trail-bike riding, but they may also enjoy the option of biking to work. Over multiple budget cycles, Walker and his legislative allies have pursued policies to limit the development of bike infrastructure. 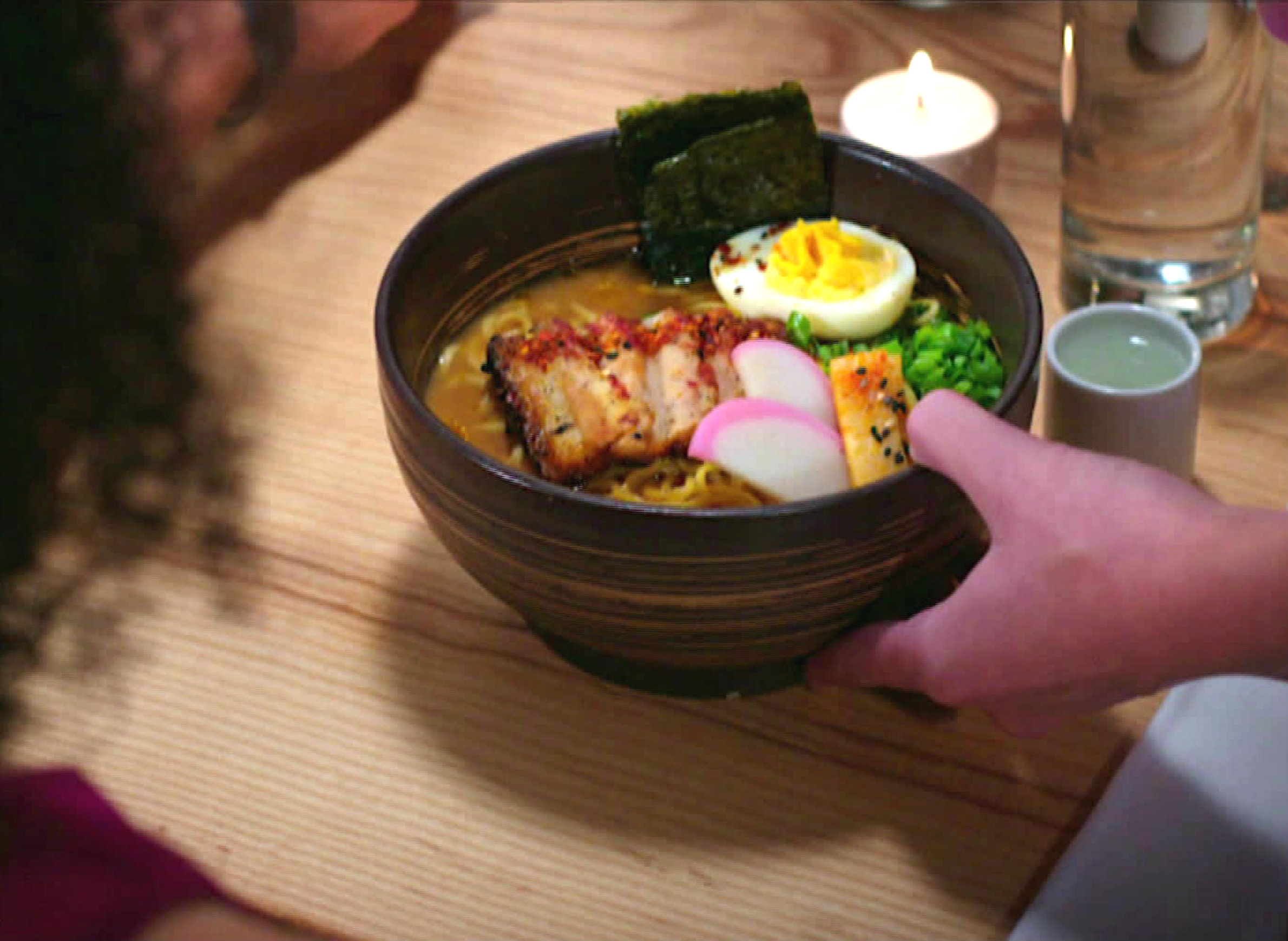 Wisconsin Economic Development Corporation
The WEDC ad campaign points to cost-of-living differences between Chicago and Milwaukee, as exemplified by a restaurant meal of ramen.

The differences between public policies the state of Wisconsin is adopting and the prevailing political inclinations of the young workers it hopes to attract go deeper than preferences about how one gets to work. Younger voters comprise an increasingly large portion of the electorate, and lean towards liberal politics, though not uniformly. As is the case with a gender gap in partisan preferences, there is a similar age gap that stretches back more than a quarter century. This disconnect fueled a Splinter piece by UW-Madison graduate Emma Roller that pilloried Walker's proposal for coaxing young workers to the state through these ads.

Young commuters in Chicago who will see WEDC's ads might be feeling a bit rattled from their "L" rides, but in a way, they may be among the most hostile audiences Wisconsin could possibly seek.

Walker To Seek $6.8M For Ad Campaign To Lure Millennials To Wisconsin
Wisconsin Enters New Territory With $3 Billion Foxconn Deal
The Complexities Of Fostering An Inclusive Workforce In Madison
Wisconsin Workers, Chicago Commuters And Cost Of Living
Gaps In The 'Skills Gap' Debate Over Wisconsin Jobs
Why It's Difficult To Gauge The Effects Of Wisconsin's FoodShare Work Rules