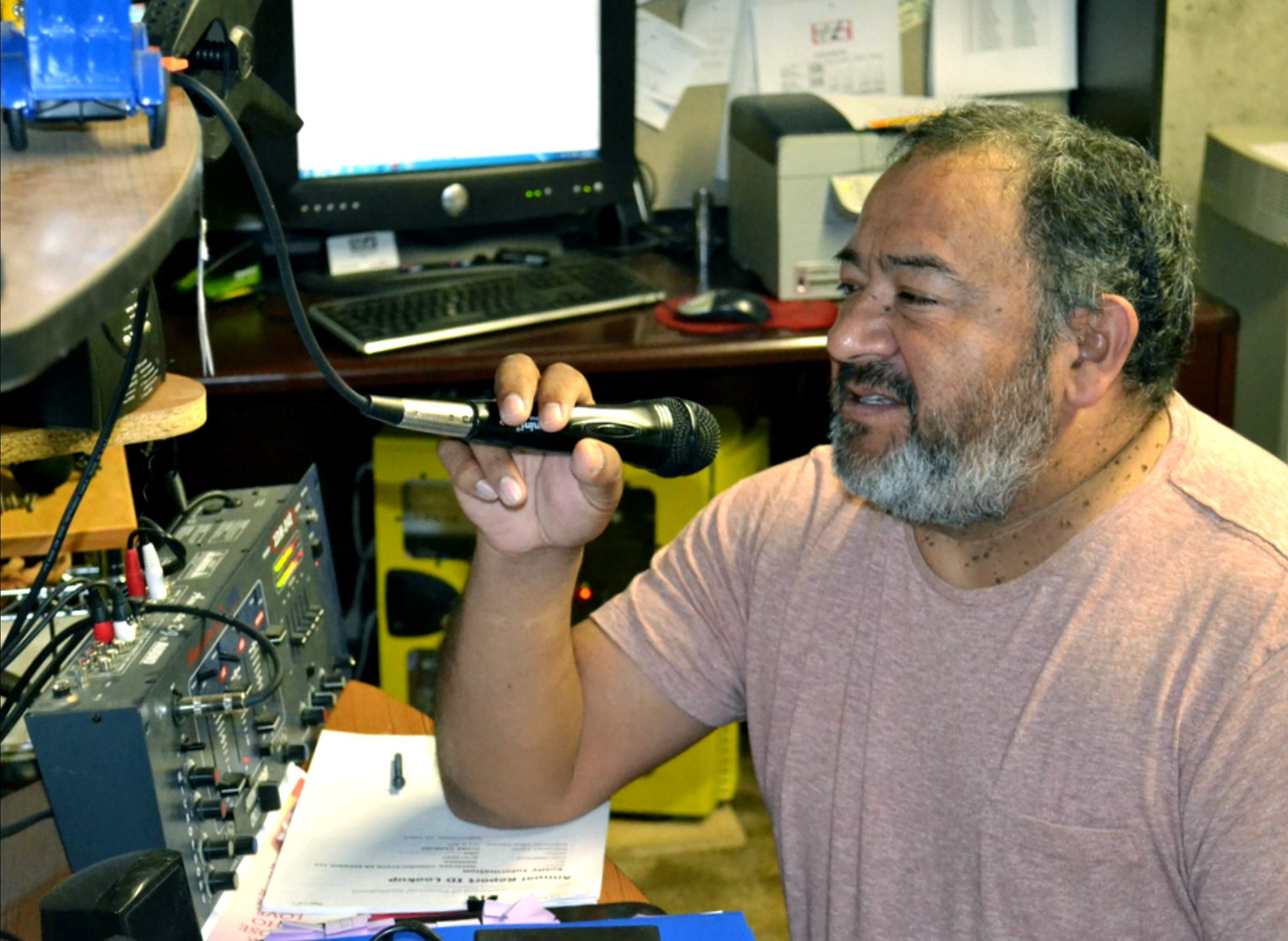 Alejandro Vazquez speaks on the microphone for El Primerito, an internet radio station he runs out of his basement.

Despite his often harsh campaign rhetoric and promises to deport millions of undocumented Latinos, President-elect Donald Trump defied expectations by getting 29 percent of the Latino vote nationwide, according to exit polling. That percentage is higher than the percentage Republican presidential candidate Mitt Romney received in 2012.

Some of the reasons behind that number can be found in the rural Wisconsin city of Abbotsford, on the border of Marathon and Clark counties in the middle of the state. Of its 2,300 residents, about 500 of them are Latino, drawn there to work on the dairy farms, in the factories, and at one of the region’s big employers, the Abbyland Foods meat processing company.

Latinos also own and operate businesses in Abbotsford, including a Spanish language newspaper and radio station.

Alejandro Vazquez runs both out of his basement. He is proud of the fact that his internet radio station, El Primerito, can reach listeners all across the country.

His newspaper, Noticias, is filled with ads. And on Nov. 19, its entire front page was a color photo of Trump.

"Mr. Donald Trump, he's not a political man," Vazquez said. "He's a businessman. He is smart, because now he's the president. He loves his family. He loves his wife, who is an immigrant. She doesn’t speak good English, and he doesn’t care."

"This is not the first time that we have a new president. For years and years, we have different presidents, Republicans and Democrats. And they promise many, many things," Vazquez said. "And they don't do it."

Vazquez is working to become a United States citizen. He grew up in Mexico City, where he had a career as a newspaper and a magazine reporter. But he has chosen to make the U.S., and tiny Abbotsford, with its white, conservative majority, his home.

Vazquez runs his businesses with the help of his daughter, Ivone, who is raising her own young daughter, Mia. Unlike her father, Ivone is a U.S. citizen because she was born in America. She, too, is not overly troubled by Trump’s rhetoric about deportation.

Alejandro Vazquez believes most of the Hispanics in Abbotsford are here legally, but even those who aren’t are too important to the economy to be deported.

Tony Gonzales, an interpreter who helps Latinos navigate Marathon County’s criminal justice system, said he is not surprised by the support Trump got from some in the Latino community.

Gonzales also said that for those who are third or fourth generation Latino-Americans, the economy was the number one issue, not social issues or immigration. But he said he is troubled by Trump’s campaign rhetoric.

"We elected a president, not a dictator," Gonzales said. "I don't have a label on my forehead saying, 'I'm a legal American. I was born here.' And these feelings that people have about you – go back to your country – that have been kind of prompted because of what Mr. Trump said, they need to go, and our legislators need to condemn it."

But now that Trump has been elected, Gonzales predicts many Hispanics want to give him a chance.

"People that immigrate, that come here to the United States, they love this country." Gonzales said. "We share values that are very similar to the Christian principles that the United States was founded under. Everybody wants to be a part of it and not have to hide."

And in Abbotsford, Alejandro Vazquez is not hiding his love for America. When asked about his hopes for the future, Vazquez said, "Strong family. Peace. Work. And not only Abbotsford. In Wisconsin, in USA."