Wisconsin's Aging Dams And The Toll Of Extreme Rainstorms 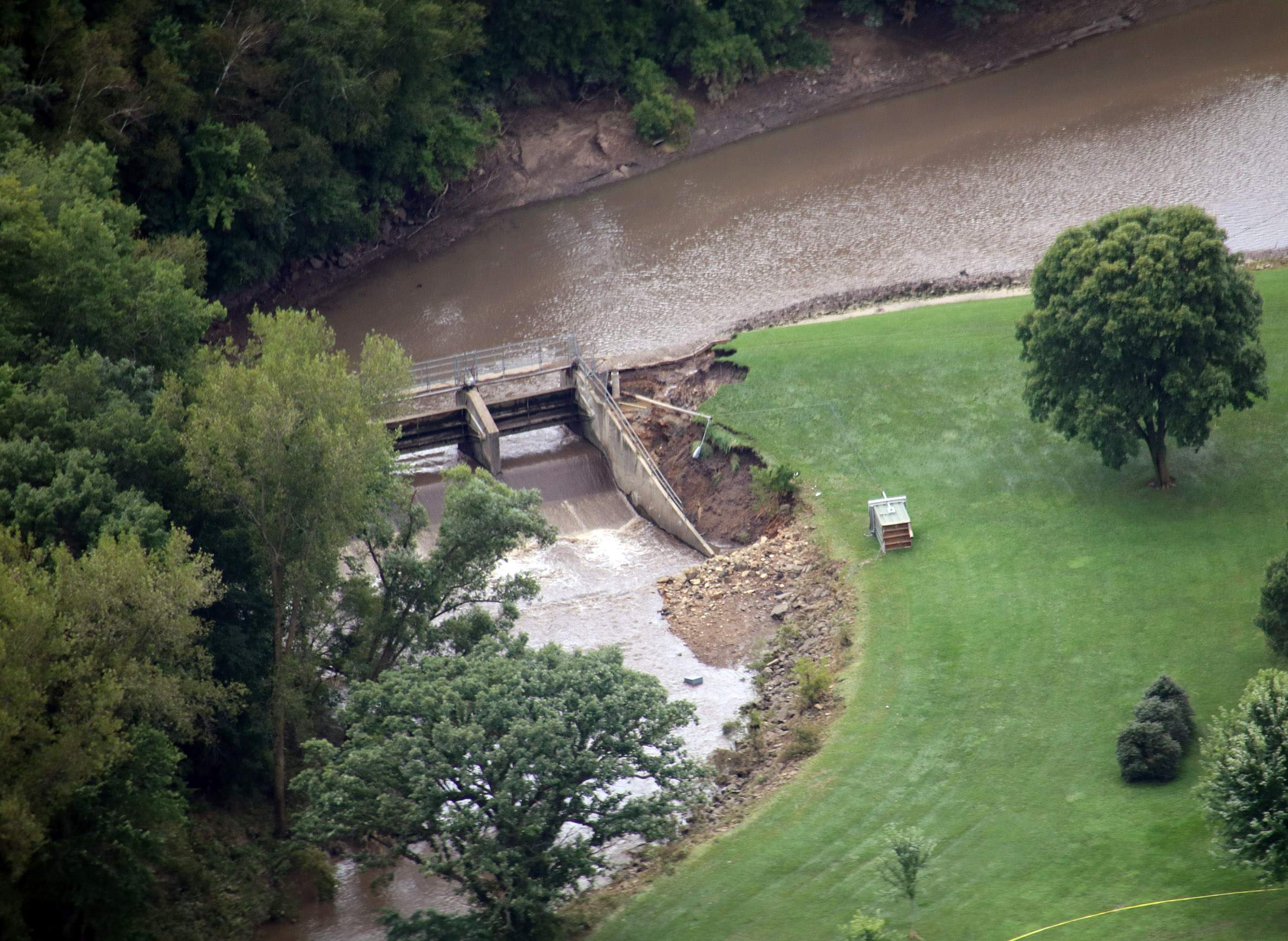 Wisconsin Emergency Management
A dam at Field Veterans Memorial Lake in Hillsboro in Vernon County was damaged in August 2018 flooding.

Wisconsin is home to roughly 4,700 dams, both public and operated by private owners. Since 2008, 14 of those dams have failed, with five in 2018 alone due to severe storms and flooding. Meanwhile, 2019 was Wisconsin's wettest year on record, according to the Midwest Regional Climate Center. As climate change increases the likelihood of more extreme storms and subsequent floods in coming years, what is the state doing about the potential risks to dams? And what does the situation look like at a more local level?

Tanya Lourigan is a dam safety engineer for the Wisconsin Department of Natural Resources. She helps oversee responsibilities of its dam safety program, which includes inspections, emergency response assistance, and regulatory matters related to the design, construction and safety of dams in the state. Bob Micheel directs the Monroe County land conservation department. During an August 2018 rainstorm, three dams in the county breached and three more were damaged.

Lourigan and Micheel spoke about their experiences and work in a Jan. 17, 2020 interview with Wisconsin Public Radio's The Morning Show. The complete audio of this discussion follows, along with an abridged version of the conversation.

Tanya, what does your work look like as a safety engineer really focused on dams?
Lourigan: We have a variety of requirements that we oversee with the department dam safety program. We are responsible for inspections of the dams and ensuring that owners are inspecting their dams. When dams are in need of repair, we review those plans and specifications that are submitted to us. We're also involved with dam transfer, transfer of dam ownership, as well as removal of dams. We provide technical assistance to owners if there's some type of emergency response or incident at a dam.

So, we have a lot of regulatory authority related to those aspects of the dams. The idea behind that is really that our main goal is to protect life, health and property.

Well, give us sort of a lay of the land here for our dams. There are around 4,700 in the state, but just 920 are large dams that are managed by the DNR. How do the rest get managed?
Lourigan: Well, actually, of those 4,700 dams, a large percentage of those, not just the 920, are regulated by the DNR. We have them broken into two types of categories. There's small dams and large dams. And 920 are large dams. And that category is based on the height of the dam and the amount of water the volume of the water that it impounds. So the large dams, given that they likely have a higher risk downstream, there's additional design requirements, inspection requirements that are involved with those dams.

So those dams would get more attention than a smaller dam.
Lourigan: Exactly, but they're all regulated. But those larger dams have more requirements. There's three different types of categories with those large dams. There's high, significant and low. There's about 200 high hazard dams in Wisconsin, 150 significant, and the remaining of those are low. What a high hazard dam — that doesn't mean that its imminent failure is likely — what it means is that should the dam fail, there's a possibility of or probability of loss of life downstream. Significant hazard dams, again, it's looking at the risk downstream that there's a possibility of property damage. And low hazard dams, it would be that loss of life or property damages is relatively unlikely.

When you talk about a dam that's in a high hazard category, because there could be loss of life if that dam would burst or overtop, something like that, are you seeing those situations here in Wisconsin, where we should be taking extra precautions because dams are aging?
Lourigan: Dams are aging. And we do have a lot of precautions that are already in place with the regulations. And we ensure, again, to protect life, health and property, that they're being managed and operated in compliance with those requirements. So, for example, all of the large dams, regardless of whether it's significant or high — they need to do what's called a dam failure analysis. And what that analysis is, is that it actually looks at what happens when the dam fails. Where's the water gonna go? How high is it going to get? And how long does it take to get to those locations downstream? So all those large dams are required to have that.

In Wisconsin, we actually require that that dam failure floodplain map gets adopted into the local communities' floodplain zoning ordinances to prevent future development in those areas.

We do have those precautions in place, and so one thing that we can do with a lot of these increased rainfall precipitation events is really ensure that those things are getting completed and implemented. 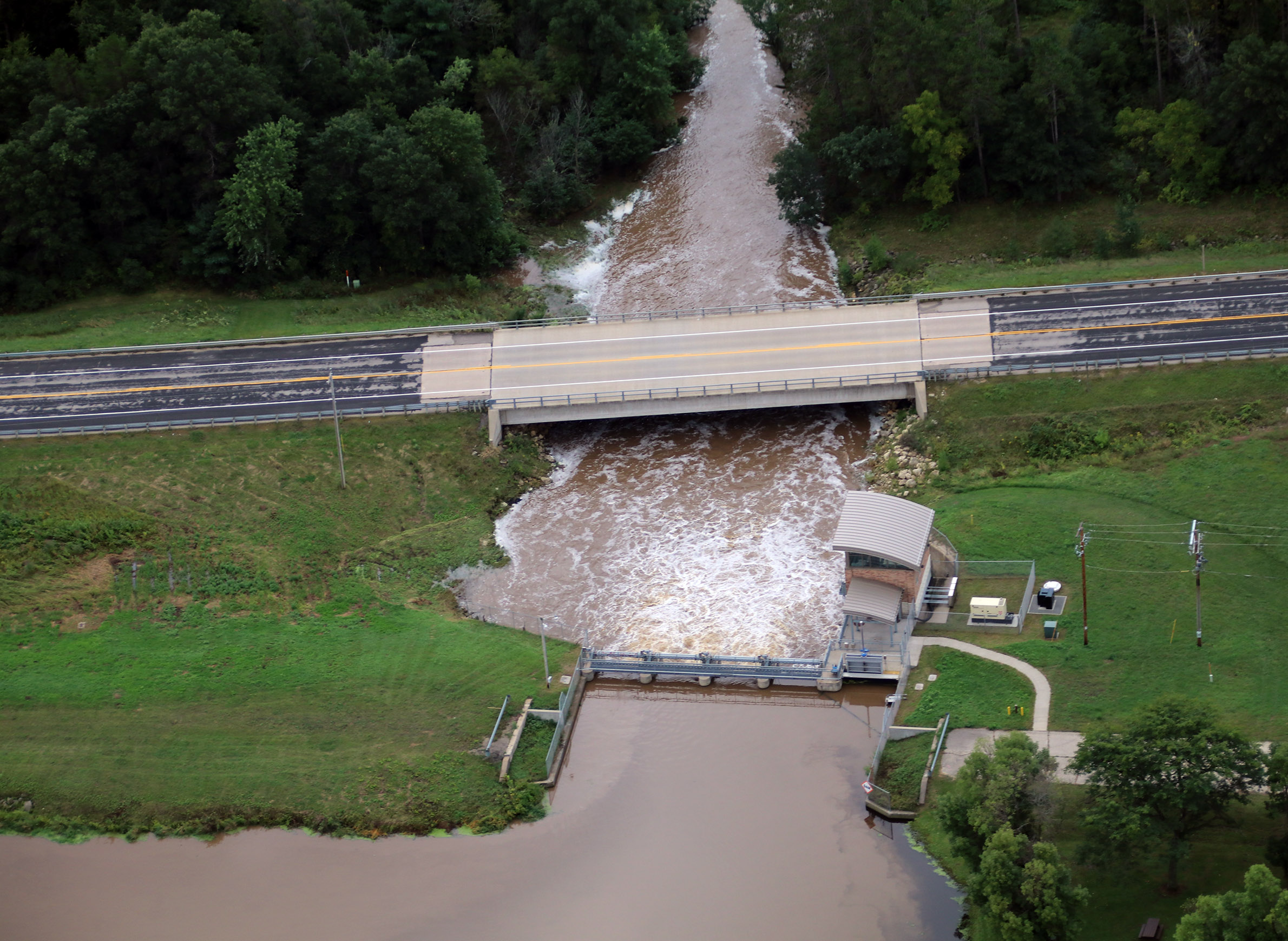 Wisconsin Emergency Management
A dam on the La Crosse River at Angelo Pond in Sparta was one of the dams in Monroe County monitored by the state during and after the August 2018 flooding.

Bob, take us back to that early morning in August 2018 when you learned of the dam failures in your county. What was that like?
Micheel: That's a very emotional moment in time. It was actually August 27. That evening, we were receiving a lot of rain in Monroe County, and specifically where I live, I could tell that the storms were lining up south and it was a constant rumble to the south. And I didn't sleep a lot of that night because you have the responsibility of these large dams in your county as far as the operation and maintenance, and you're concerned about people's welfare and safety.

Got to work that morning, listened to the radio about Coon Valley experiencing flooding, roads damaged and out, and right away I started thinking about the Coon Creek dams. Monroe County has seven in that watershed.

When I got to work, I noticed my phone had a message on it, and took that message. One of the landowners/farmers that operates around one of the structures just plainly left a message "dam is gone." And so I called him back immediately. I could tell in his voice [that he was] nervous, very worried about what happened in that situation. Basically, all he knew was [it was] gone. 'There's no water behind the dam, lots of damage. You need to check it out.' And so I grabbed the [U.S. Department of Agriculture's Natural Resources Conservation Service] civil tech engineer, and we headed out there immediately.

What did you see when you got there?
Micheel: Getting there was a challenge since I was in Portland township, and there was a lot of infrastructure damage on roads. We were finally able to navigate to that spot. We got to the town road where it enters into the private property, and we parked right there because everything was destroyed.

I looked up the valley, and the farmer [who] has a pumpkin patch, it's called [Tucker and Becky’s Pumpkin Patch]. And everything he had there was erased.

I knew things were not looking good as we navigate up the valley floor. Crossing the stream, where we couldn't in a couple places it was probably five, six times wider than it normally should be. As far as destruction: trees gone. We finally get up towards the structure itself, and you could see boulders the size of vehicles laying everywhere below the dam, and you notice that the hillside that the dam abutted to was gone.

It had reshaped the actual earth around it. How long has a dam been there?
Micheel: Most of the dams are about 52 to 55 years they've been in existence. They were built in the late '50s, early '60s. We actually got to the site, walked up the embankment and the unique part is all the grass on the dam was laid down. So right away, you're thinking, 'What the heck happened here?' Then when we got to the top of the structure, which is 35 to 40 feet higher than the valley floor, which is an earthen berm, and you start looking around and you could tell that the auxiliary spillway ran and the grass was knocked down where you're standing. So you knew that the dams overtopped.

A dam on the La Crosse River at Perch Lake in Sparta was one of the dams in Monroe County monitored by the state during and after the August 2018 flooding. 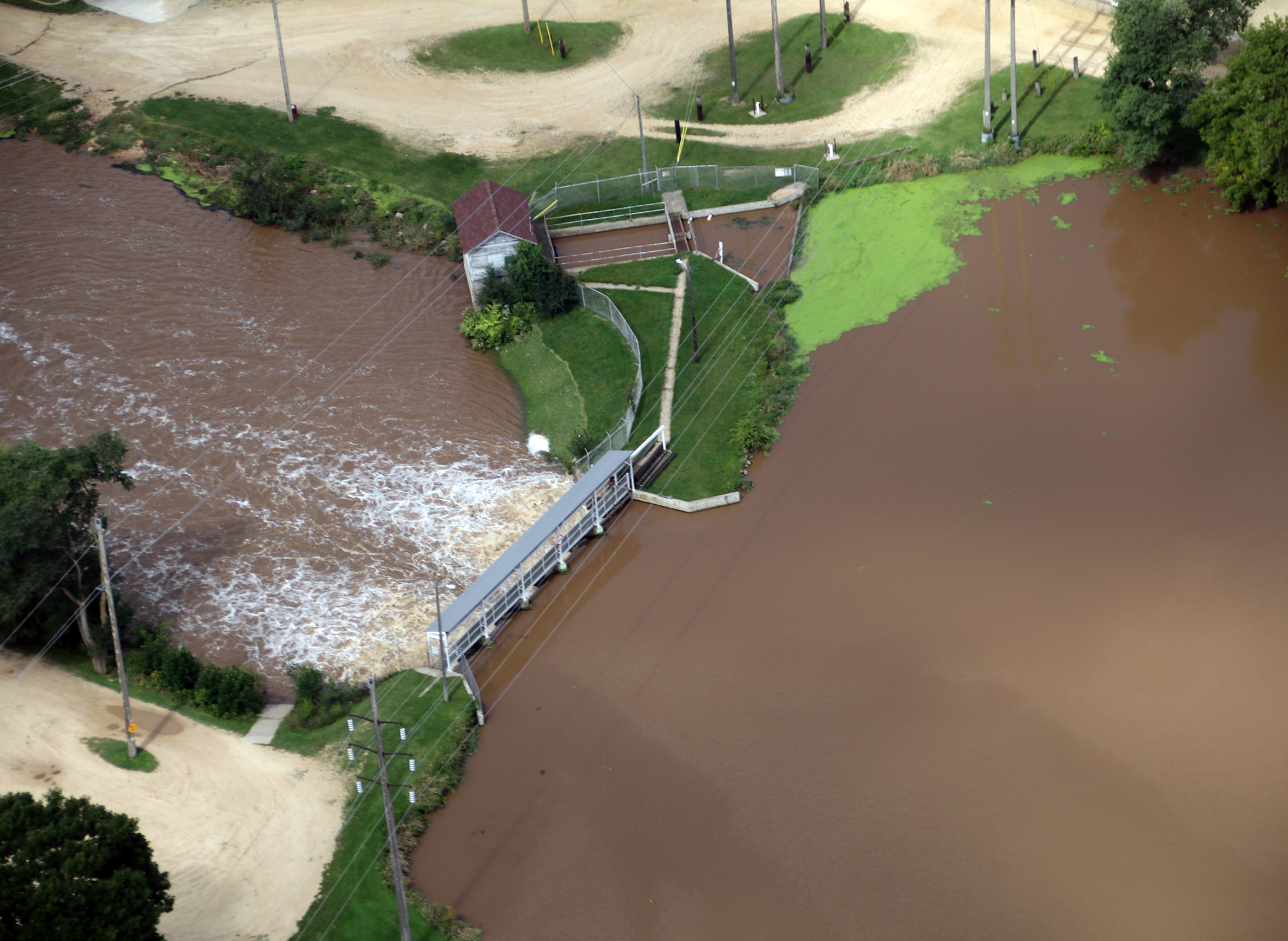 Bob, how did the state and federal, local officials handle the fallout, handle the emergency and the immediate aftermath of the dam failures in your county?
Micheel: First and foremost is, you know, make sure everybody is safe and you can get the roads back open, whether it's a town or a county — basically have the help with all the private citizens and what possible funding to do the repairs and provide assistance.

What was the aftermath like? Did you rebuild these dams? What is it like there now?
Micheel: So the immediate response is 'OK, evaluate all the structures.' So federal engineers, program managers basically flew in from different areas of the United States to take a look at this situation because it was very unique. And from that field trip report, the recommendations came in. The three that were damaged and still functionable — to repair them as soon as possible. And the three that breached, [the recommendation] was to stabilize the structure and remove debris so it doesn't cause a situation down the road if a flood event comes along. In 2019, we were able to secure funds from [the Natural Resources Conservation Service] to repair the three damaged ones and stabilize the three breached ones. And we just recently finished that.

Monroe County has since developed this task force to look at climate change. What solutions is your county planning to implement? What is it coming up with?
Micheel: So the first objective was to recognize climate change is happening. And second, we came up with 10 objectives or goals that the county wants to focus on.

First and foremost, we-we identified that we need to do a better job of identifying where these isolated storms are happening, monitor precipitation and warn the public. As far as flooding goes, it just seems that the southern part of the county is really getting hammered. And this is a cumulative effect. This has been going on since 2007. I think we've had 17 to 18 different major storm events in the Driftless Area, not necessarily Monroe County. We need to do a better job of alerting the public.

Second is we need to get the public out of the way if these big flood events are going to happen. So we have a floodplain, nature reclaimed it, and we need to keep people out of there. We're just fortunate enough in 2018, nobody got killed.

Reengineering Infrastructure For A Wetter Wisconsin
The Costs Of Extreme Storms Come Into Focus Across Wisconsin, US
Calculating Flood Risk In 'The Least-Climate-Adapted Spot In The Country'
Lessons From A Deluge In The Driftless
Bayfield County Pursues Flood Resiliency To Protect Its Economy