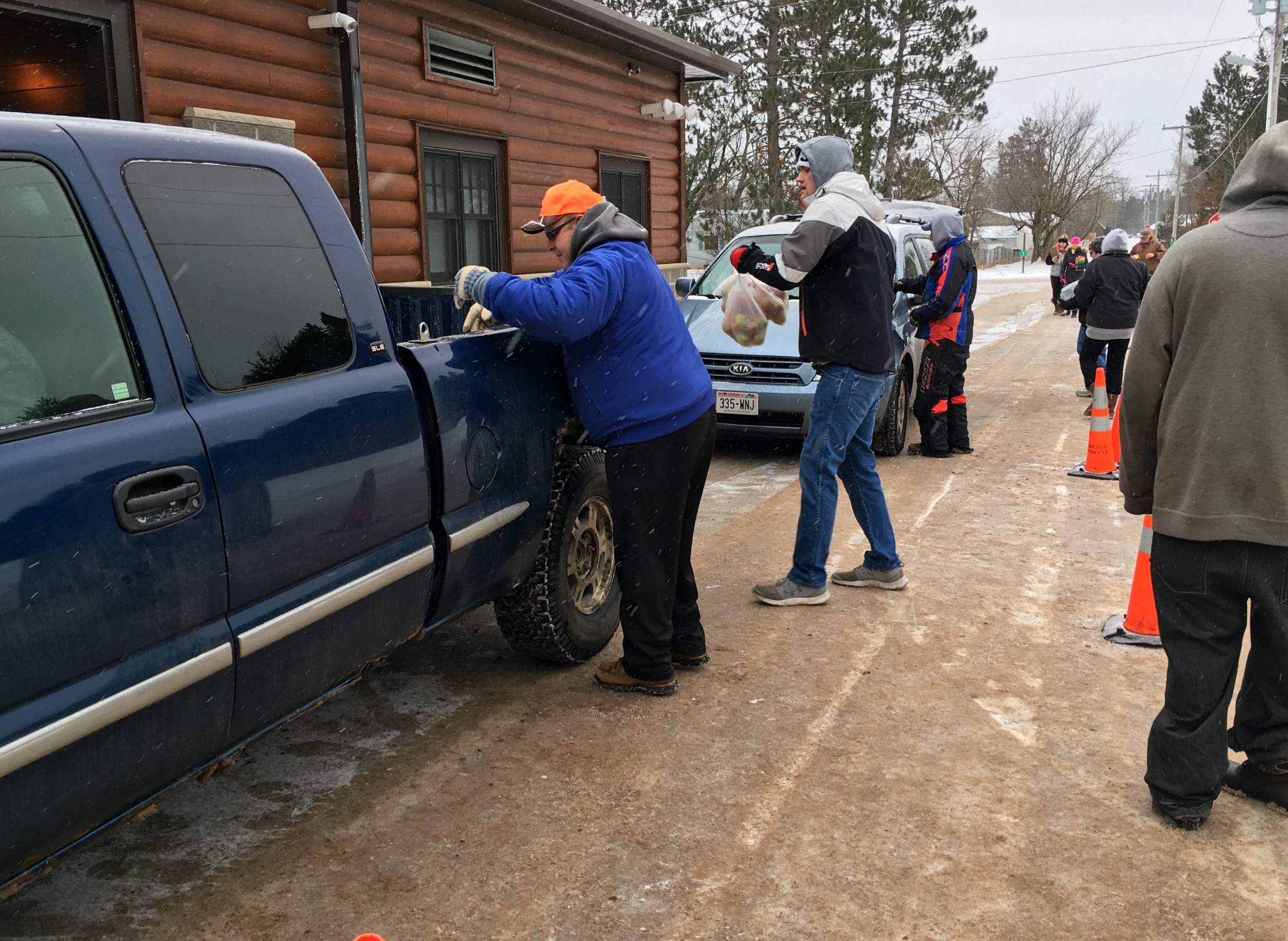 Volunteers load food into cars at a mobile food pantry in Solon Springs.

Employment may be up in Wisconsin, but some families are still struggling to put food on the table, and it can be even more challenging for older adults.

Seniors make up close to 10 percent of the more than 44,000 people served each year in northern Minnesota and Wisconsin by Second Harvest Northern Lakes Food Bank.

The food bank has been reaching more older adults in need with mobile food pantries in northern Wisconsin. Second Harvest travels to cities such as Solon Springs and Hurley to deliver food. Kevin Anderson said he drives up to 45,000 miles a year delivering food for Second Harvest.

"I hit Bayfield and Ashland and Red Cliff, so I’m pretty much all over the map," he said.

In late December, Anderson traveled on the snow-covered road to Solon Springs to deliver pallets of food for up to 130 households. When he arrived, a line of cars that stretched at least half a mile down the road were waiting to pick up food. Anderson said it’s the same scene on the last Wednesday of every month when he arrives.

Around 20 volunteers surrounded the truck and waited to pass out food, including Solon Springs' Marie Rones. "They’ll unload all the pallets off the truck, and they’ll let us know how many of each thing that we give to the people as they come through and then … as the cars come through, you just take whatever amount is supposed to go in that vehicle and put it in their vehicle for them," she explained.

"There are a lot of elderly people who come and get in line, and it’s harder for them to get out in the winter, so this is easier for them," she said.

Cars are lined up over a hill in Solon Springs to pick up food from a mobile food pantry offered by Second Harvest Northern Lakes Food Bank. 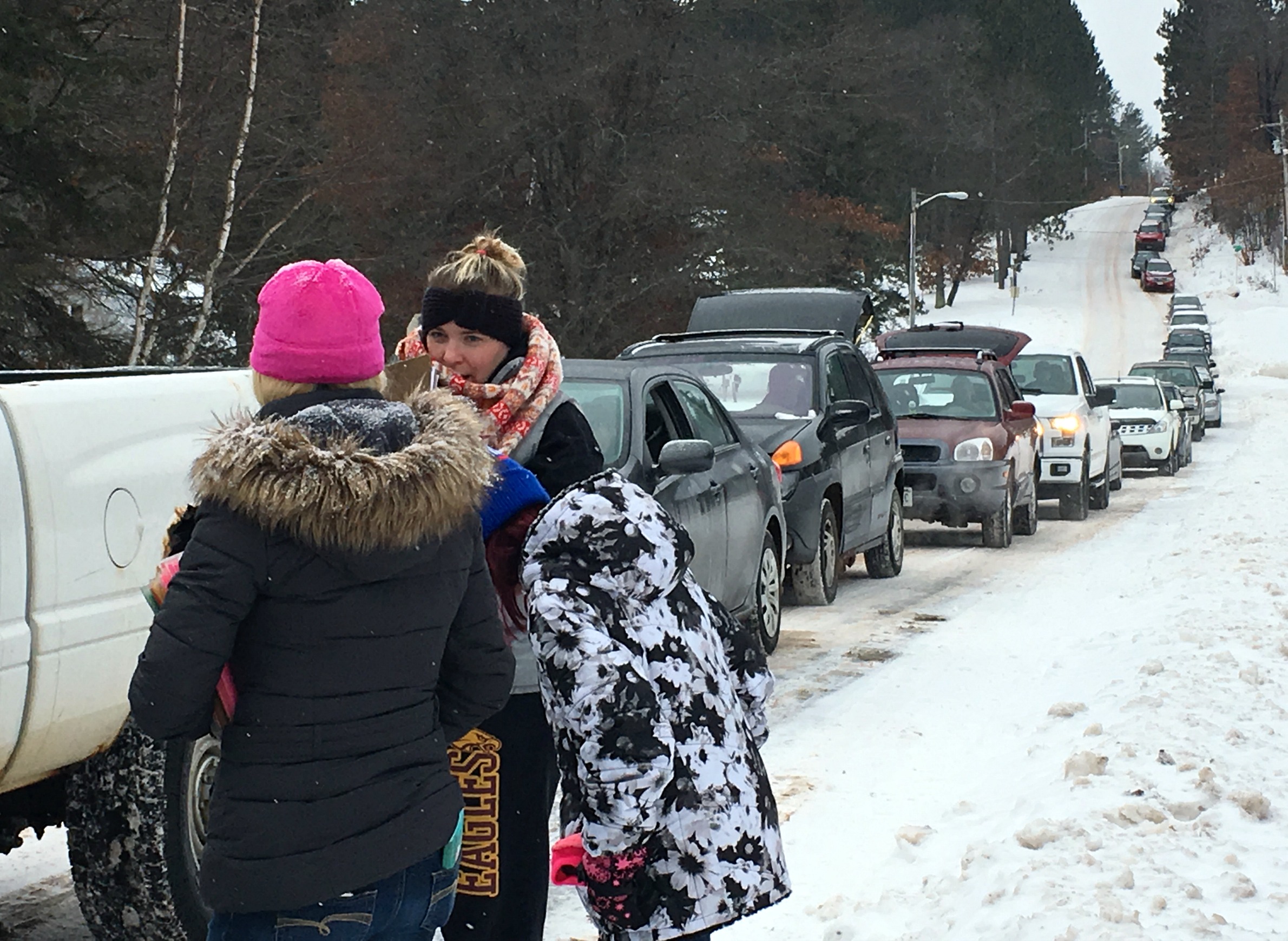 More than a quarter of the 370 households using the mobile food pantries in northern Wisconsin include people over the age of 65.

Bonnie MacLellan, 66, was waiting to pick up food for herself and her daughter, who was laid off during the winter. MacLellan works full-time, but she lives alone. "So it helps on my budget of food, too," she said. "Makes it last a little longer because I have mortgage on my home, you know, and the heat and the electric and everything, so it helps stretch my money a bit more."

MacLellan said whatever she can save helps her pay for health care. "Let’s say I go to the dentist. I don’t have any insurance. That way I can help pay for that as long as I don't have to pay so much for food," she said.

Doreen Khalar said her mother-in-law usually waits in line to pick up food for her and their family. "I think for her it helps when you’re on a fixed income and stuff, and I don’t make a whole lot of money," she said. "This helps feed the family."

Kathy Beecroft, who is 62 and on disability, said she used to go to the Salvation Army a half hour away in Superior before the mobile food pantry was available. "It helps you out with some of the stuff you can’t afford to buy like fruit and stuff … and we don’t have to drive so far," she said.

An assembly line of volunteers grabbed bags full of apples, onions, canned vegetables and turkeys. Dan Wilson, program director for Second Harvest Northern Lakes Food Bank, said the food they provide through the mobile food pantries is not enough for them to make it through the whole month. "This is just a small portion of it, but with this and food stamps and any other assistance they can get it kind of helps make a better picture for everybody," he said.

Solon Springs village president Mike Blaylock helps coordinate the mobile food pantry with Second Harvest. "[I'm] super happy that we're able to fill this need and this void for some of these folks, but [it's] also difficult to know there is the need," he said.

But, it looks like that need has been growing. Around 40 households received help from the mobile food pantry in Solon Springs when it started a couple years ago. Today, almost three times that many households benefit from the program each month.