A UW-Designed Dam Removal Tool Moves Data Rather Than Concrete 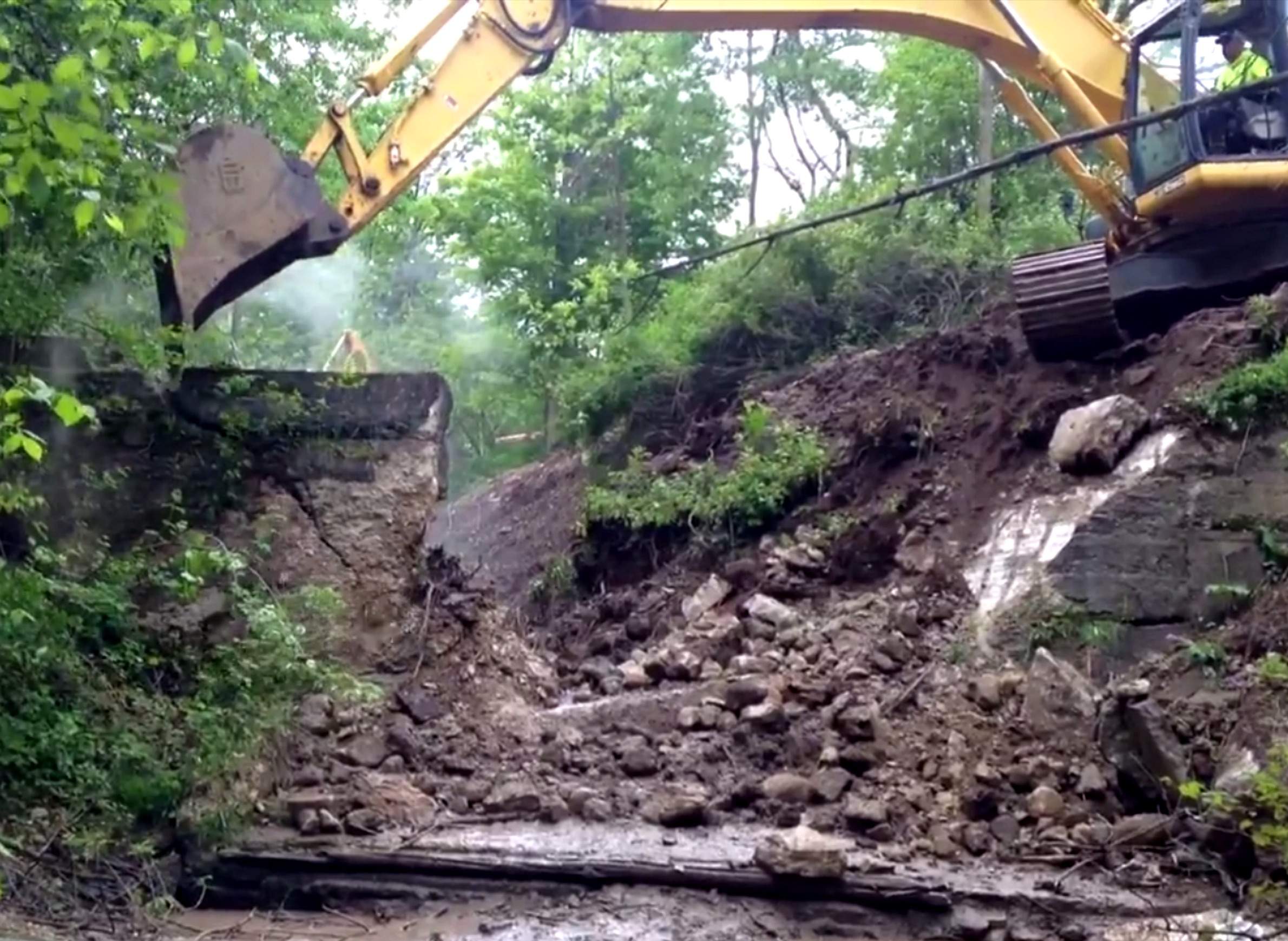 The Mineral Springs Creek damn in Port Washington was removed in June 2016.

More than 12,000 dams populate the Great Lakes Basin, estimates the U.S. Geological Survey. Some produce energy or provide recreation. But most don't.

In fact, the only function many now maintain is fracturing the vast network of waterways that flow to the Great Lakes. With the oldest of these dams having stood for more than a century, dam removal is growing in popularity so that fish routes can be restored and they can be removed before they fail and cause harm.

Since 1912, more than 1,384 dams have been removed. In just Michigan alone, 63 have been removed since 1990, said Byron Lane, the water resources unit supervisor with the Michigan Department of Environmental Quality.

But which ones should be removed first? A recent study on barriers in the Great Lakes Basin looked to answer that question with a new tool called Fishwerks. Researchers at the University of Wisconsin-Madison developed an online application to help decide which removal project is the best removal project.

"This was an unusual paper because it wasn't hypothesis-driven or question-driven. It's about a tool for managers to make decisions," said Allison Moody, a post-doctoral student at UW-Madison and the lead researcher on the study. 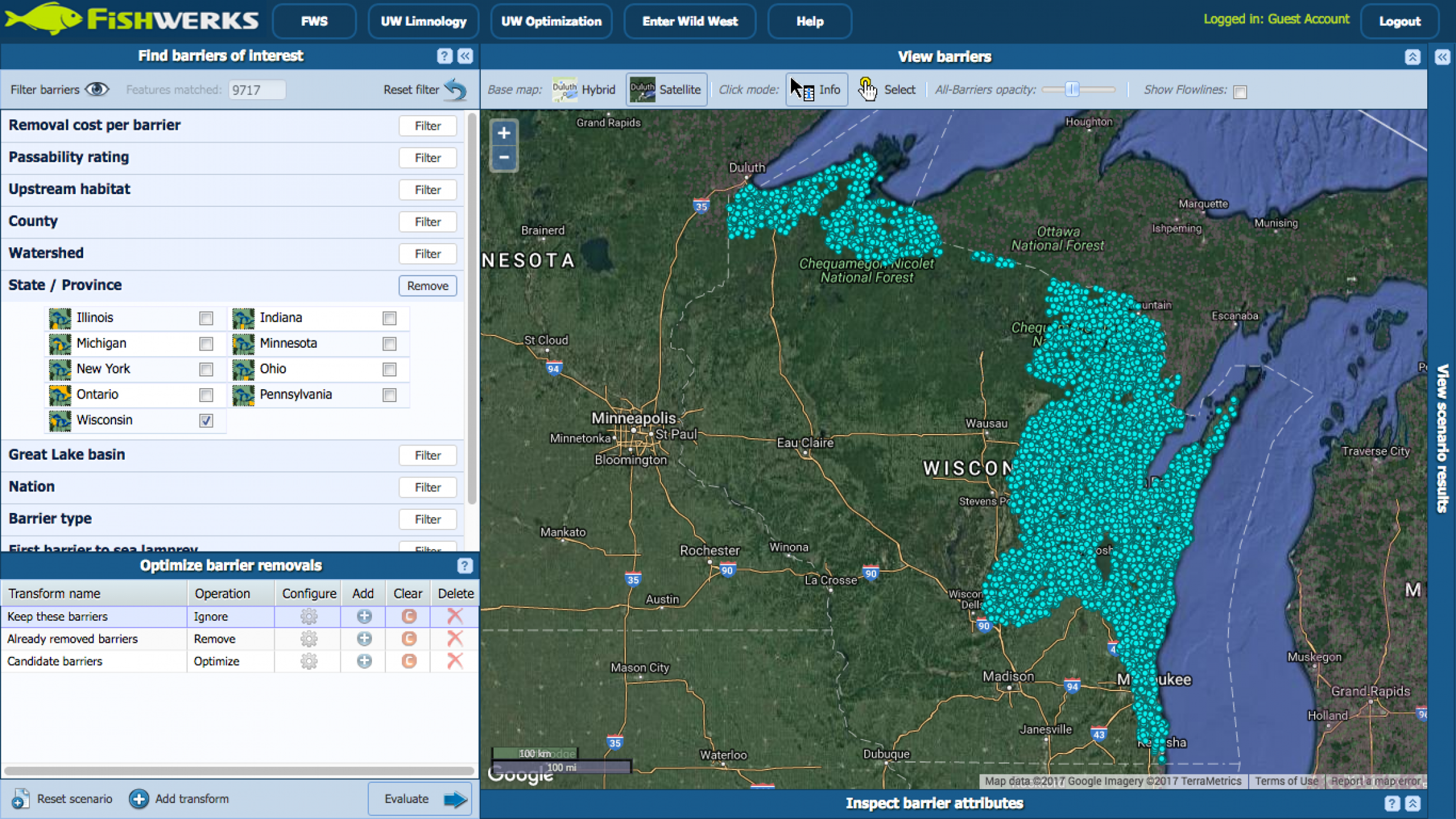 Fishwerks
Fishwerks is a new online tool that helps people prioritize dams to be removed.

Accessible at greatlakesconnectivity.org, the tool offers anyone the option to find any barrier in the basin that's been logged in the database. Isolated by filters, like the barrier type, watershed location and removal cost, they help users decide which barriers should be removed first.

Filters have even been built to accommodate variables unique to the region. In states like Michigan, where sea lamprey pose a serious danger to the ecosystem, a filter can be turned on to highlight where dams usefully impede their progress.

There are many reasons for removing a barrier, Moody said. They include restoring migratory fish routes and removing structures that could see potential breaches. But one dwarfs them all.

"The basic premise we're looking at is, for a given budget, what is the maximum amount of stream length opened up per dollar," Moody said.

When dam owners are faced with what to do with aging dams, they have two options: remove or repair. Because the remove option is a one-time cost, it carries more incentive.

The dollar is the driver. Jessie Thomas-Blate, a contributing writer and member of American Rivers, a national river conservation organization focused on protecting America's rivers, echoes a similar sentiment as Moody.

"The biggest impetus for dam owners to remove them comes down to the dollars," she said. "The momentum that's been building around the country as people begin to realize that dams are aging comes from how problematic they can become."

Feb. 7 shined a spotlight on that problem when the Oroville Dam in northern California displaced more than 188,000 people.

The structure had been around for almost 50 years. Last updated in 1970, the dam hadn't been improved to account for increased rainfall and flooding due to climate change. When widespread rainfall damaged the main spillway, evacuation of the surrounding area ensued. That failure is emblematic of how prevalent the age problem has become for dams.

"A lot of dams in North Carolina where I work are over 50 years old, which is a similar story across the country," said Erin McCombs, another member and contributor for American Rivers.

"Back when these were built, they were built as mills for generating power or grinding grain or creating energy for a factory," Lane said.

"Of course, now you have a large distribution of nuclear power plants and coal-fired power plants," he said. "So the percentage of Michigan's energy generated by hydropower is pretty small these days. A lot of these dams that were built for power production or milling no longer serve that purpose."

Most of the dams that have been removed were taken down in the past 20 years, McCombs said.

In fact, 2016 tied with 2014 for most dams removed nationwide in a single year at 72, as listed in an American Rivers database. And the number likely will only grow as the necessity for removal becomes more prevalent.

"When you have situations like Oroville where people are getting evacuated, property is endangered, people are endangered, awareness is going to increase because we're only going to start to see more and more of these situations." Thomas-Bates said.

Which brings this issue back to Moody's study that used what is called the Decision Support Tool. For the researchers' part of the study, they're already on their way to improving the application to incorporate more filters like individual fish species routes.

"The basic premise is that the tools will add more information about different kinds of barriers," Moody said. "We're going to add the possibility to model each individual fish species."

Editor's note: This article was originally published on May 10, 2017 by Great Lakes Echo, which covers issues related to the environment of the Great Lakes watershed and is produced by the Knight Center for Environmental Journalism at Michigan State University. The report is part of a multi-part series about dams in the Great Lakes region.