What Is Wisconsin's 'Right-To-Farm' Law And Who Does It Protect?

The Origins Of And Debate Surrounding A Law That Shields Farms From Nuisance Claims In Court
Will Cushman
WisContext
Oct. 21, 2019 | 5 p.m. 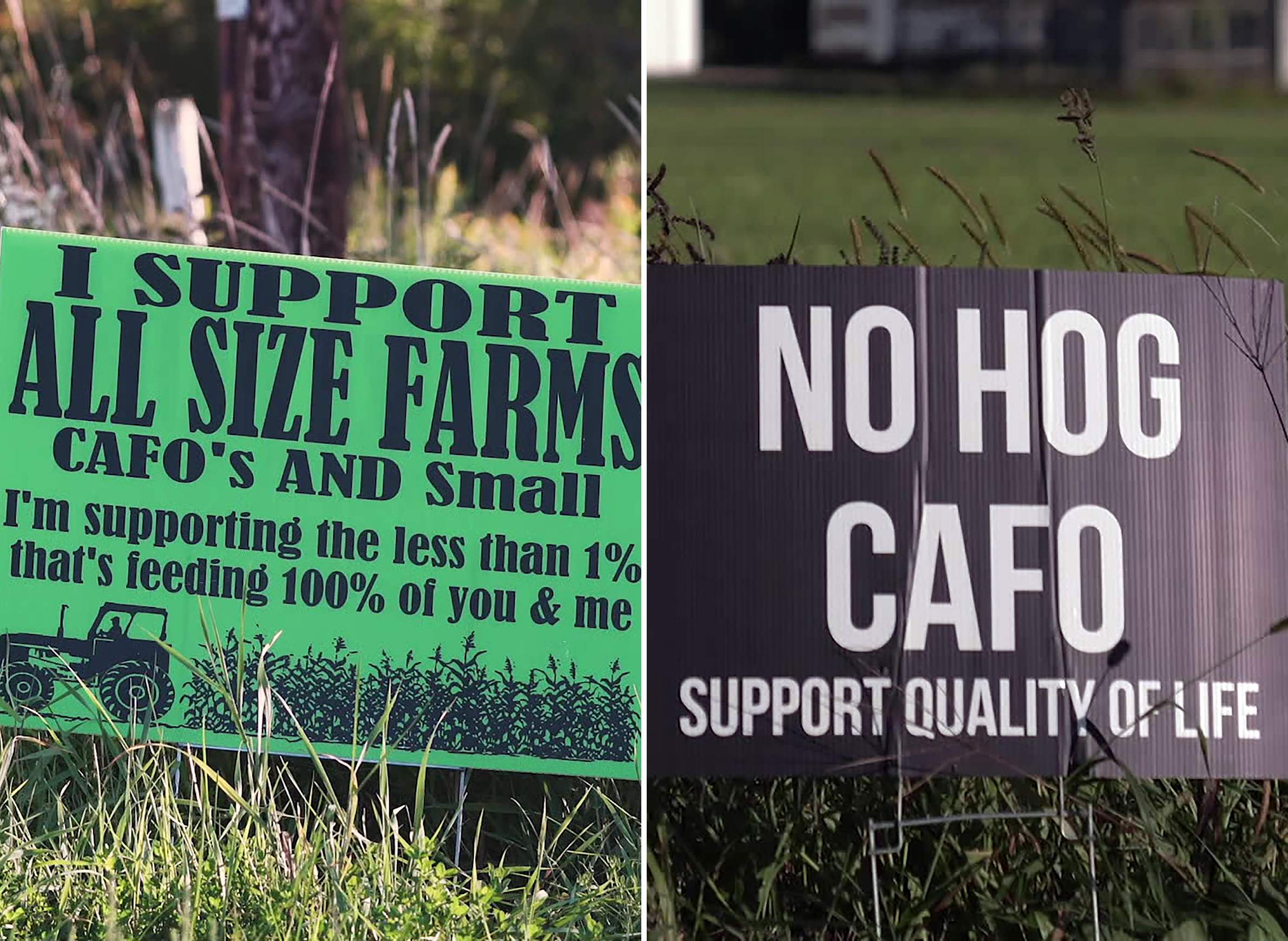 Wisconsin Public Television
Signs proclaim sentiments for and against a proposed livestock facility in Burnett County that would house 26,000 swine and easily be largest hog farm in Wisconsin. Because the facility is proposed for an agricultural field, the state's right-to-farm law would provide it expansive protections against nuisance claims even though it could fundamentally alter the lives of neighbors.

Daily life for many Wisconsinites is permeated with the sights, sounds and smells of agriculture. But as a growing number of livestock farms in Wisconsin expand to massive sizes, sometimes housing thousands of animals in relatively close quarters, the sensations these farms arouse among their neighbors can lead to intense personal conflicts.

Rarely, however, do these impassioned disputes result in legal action. That's in part thanks to a state statute that explicitly protects agricultural operators from all but the most serious nuisance lawsuits brought by neighbors. This statute is known as Wisconsin's "right-to-farm" law. Proponents say the law provides necessary protection to all farmers against frivolous lawsuits. Critics, meanwhile, say the law's scope is overly expansive and can discourage legitimate nuisance claims.

Either way, the law seems to do little to ease simmering tensions between some of the state's largest livestock farms and residents in the primarily rural communities where they operate, even if it does help keep those tensions from boiling over into legal battles.

In 2019, the state Department of Agriculture, Trade and Consumer Protection is mulling proposed changes to rules that govern where large livestock facilities can be built in some parts of the state. The right-to-farm law is one factor among many that are contributing to a contentious debate over these proposals.

What are 'right-to-farm' laws and what prompted them?

All 50 states have some version of a right-to-farm law. Like many states, Wisconsin's law was passed in the early 1980s, as concerns were mounting over the loss of farmland to urban sprawl.

The intent of most of right-to-farm laws was to keep suburban and exurban residents from challenging lawful agricultural practices on nearby farms that they might find bothersome, such as the spreading of manure on fields and its attendant odors. That's according to Rusty Rumley, a senior staff attorney at the National Agricultural Law Center and an expert on right-to-farm laws across the United States.

"These laws were meant to protect farms in suburban areas from encroachment," Rumley said.

Part of the push for a right-to-farm law in Wisconsin came after a 1981 state Supreme Court decision which upheld a lower court's ruling that forced an egg farm near Bristol, in Kenosha County, to shutter. The decision followed years of complaints about odor from the farm disrupting life in the community. 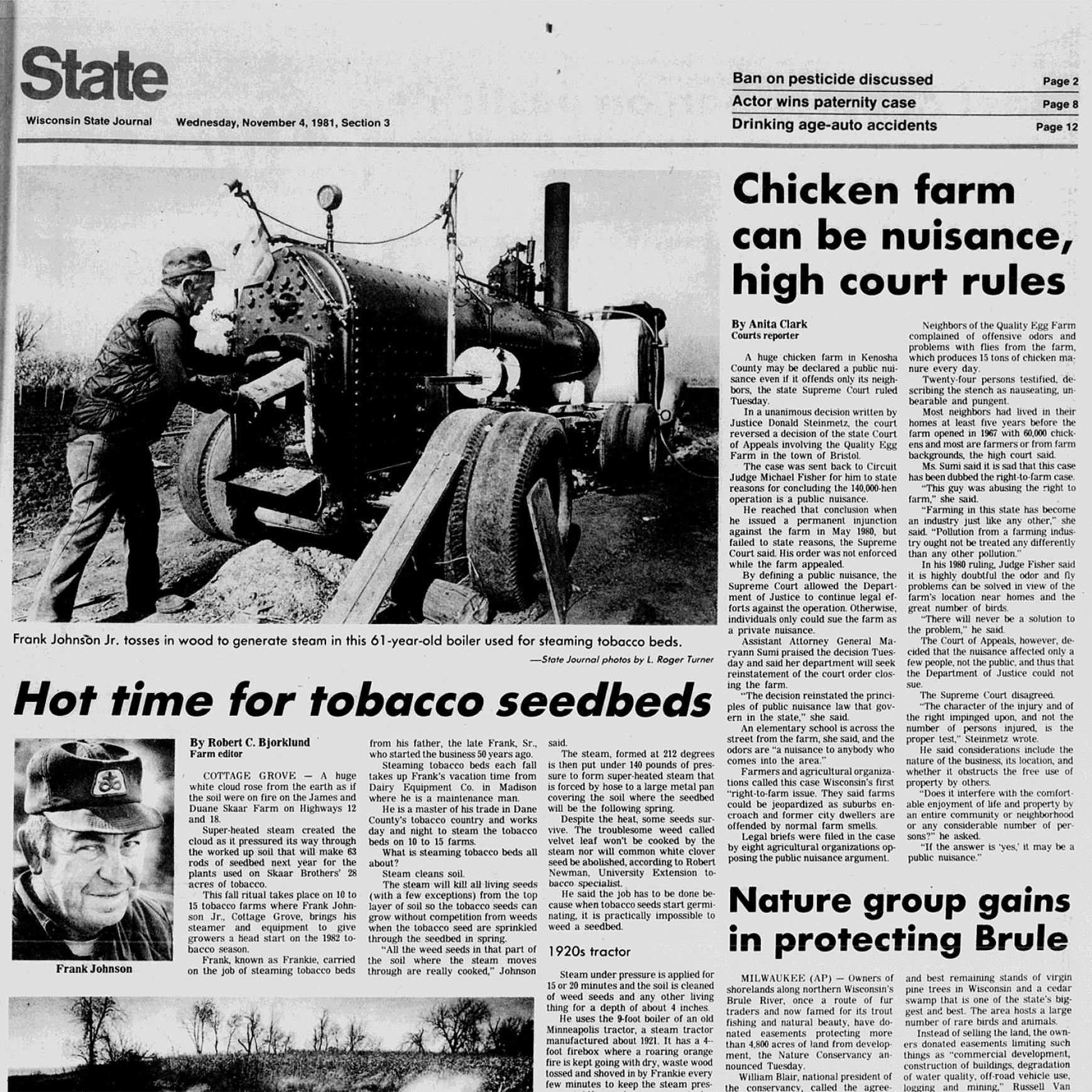 That case, State of Wisconsin v. Quality Egg Farm, Inc., prompted farm groups and legislators in the state to push for a law that would protect the agricultural sector's economic interests against similar nuisance claims in the future.

With that intention, Wisconsin's statute aligned with right-to-farm laws in other states. But little else about these laws is uniform from state to state. In fact, many states, including Wisconsin, have updated their laws in the decades since they were first enacted.

"There's a lot of variation out there across the country," said Rumley. "One thing that's really unique about these laws is that the cases associated with them tend to mirror the type of agriculture you have in your state."

For instance, Louisiana's law helps protect farmers from nuisance claims related to burning sugarcane fields. In some states, right-to-farm laws can even establish protection for non-agricultural uses of farm buildings, Rumley said, citing their use in some New England states to defend operators of "wedding barns" from nuisance claims related to noise.

How does Wisconsin's right-to-farm law work?

Wisconsin's right-to-farm law is worded in 2019 to protect lawful farming practices related to crop and livestock production, forestry, beekeeping, fish farming and half a dozen other agricultural uses defined in state law.

Rusty Rumley said the primary beneficiaries of Wisconsin's law are likely to be livestock farms, simply by virtue of their large number in the state and a greater potential for conflict arising from their operations, mostly by way of manure odor and dust. 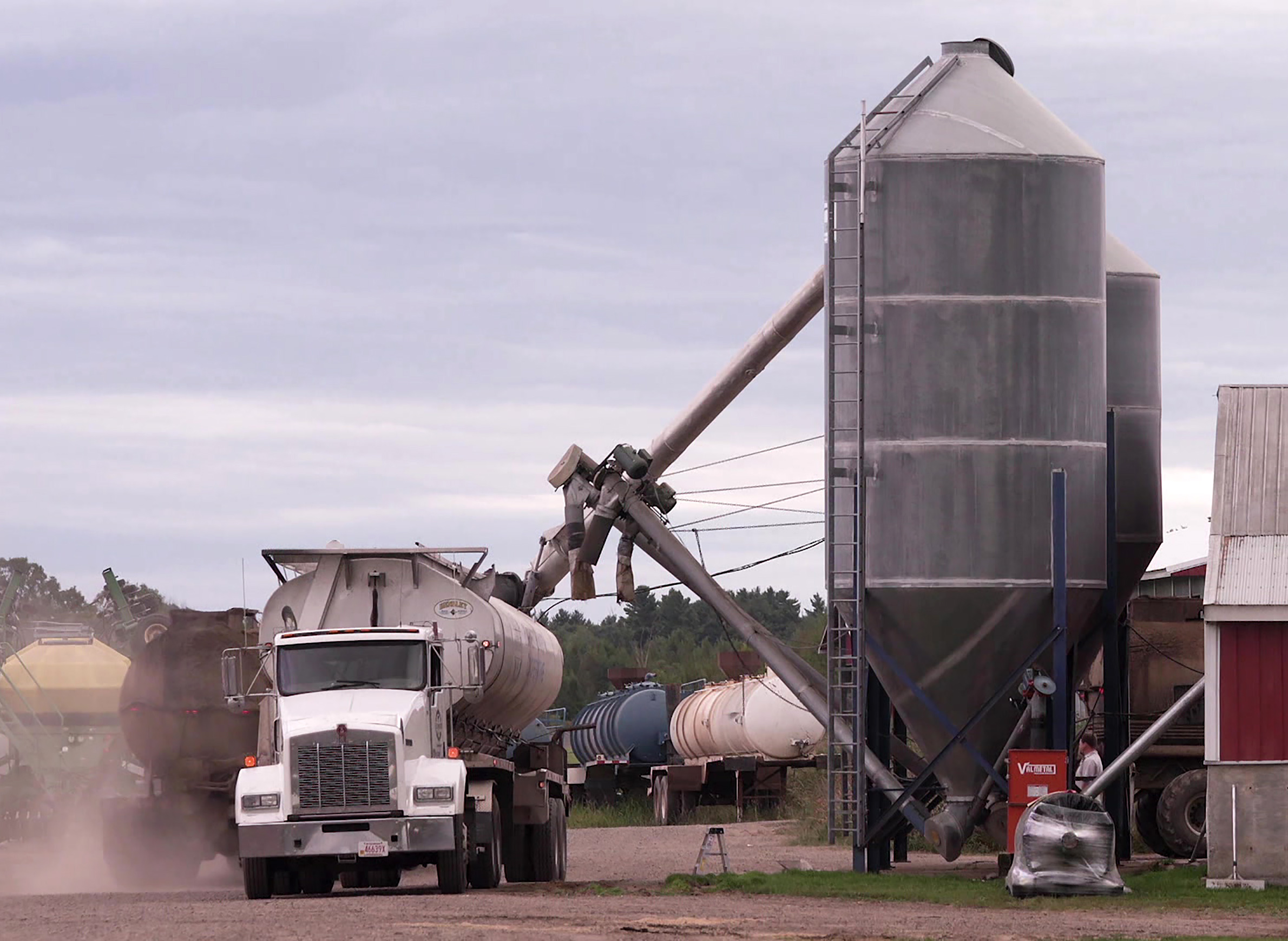 Wisconsin Public Television
Complaints related to larger farms include those related to dust kicked up by trucks.

But when does dust or odor emanating from a farm cross the threshold from bothersome to a legal nuisance?

There are a couple circumstances in which a nuisance claim can stick in a Wisconsin court.

First, whatever farming practice is causing the alleged nuisance must "present a substantial threat to public health or safety," according to the statute. Alternatively, to qualify as a nuisance, any agricultural activity must have begun on the property under scrutiny only after the neighbor suing took possession of their own property.

To be exact, Wisconsin's statute says activity cannot be found to be a nuisance if it is "conducted on, or on a public right-of-way adjacent to, land that was in agricultural use without substantial interruption before the plaintiff began the use of property that the plaintiff alleges was interfered with."

Added in 1995, the wording in this last part is important because it gets to the heart of a debate surrounding the law: the fact that it protects nearly all agricultural operations on farmland, even if they are brand new. This protection stands even when, for instance, a crop field is converted into a several-thousand-head livestock facility.

Large dairy farms and the odors that accompany them are sometimes the subject of complaints from neighbors. Rarely, however, do those complaints result in lawsuits, thanks in part to legal protections outlined in Wisconsin's right-to-farm law. 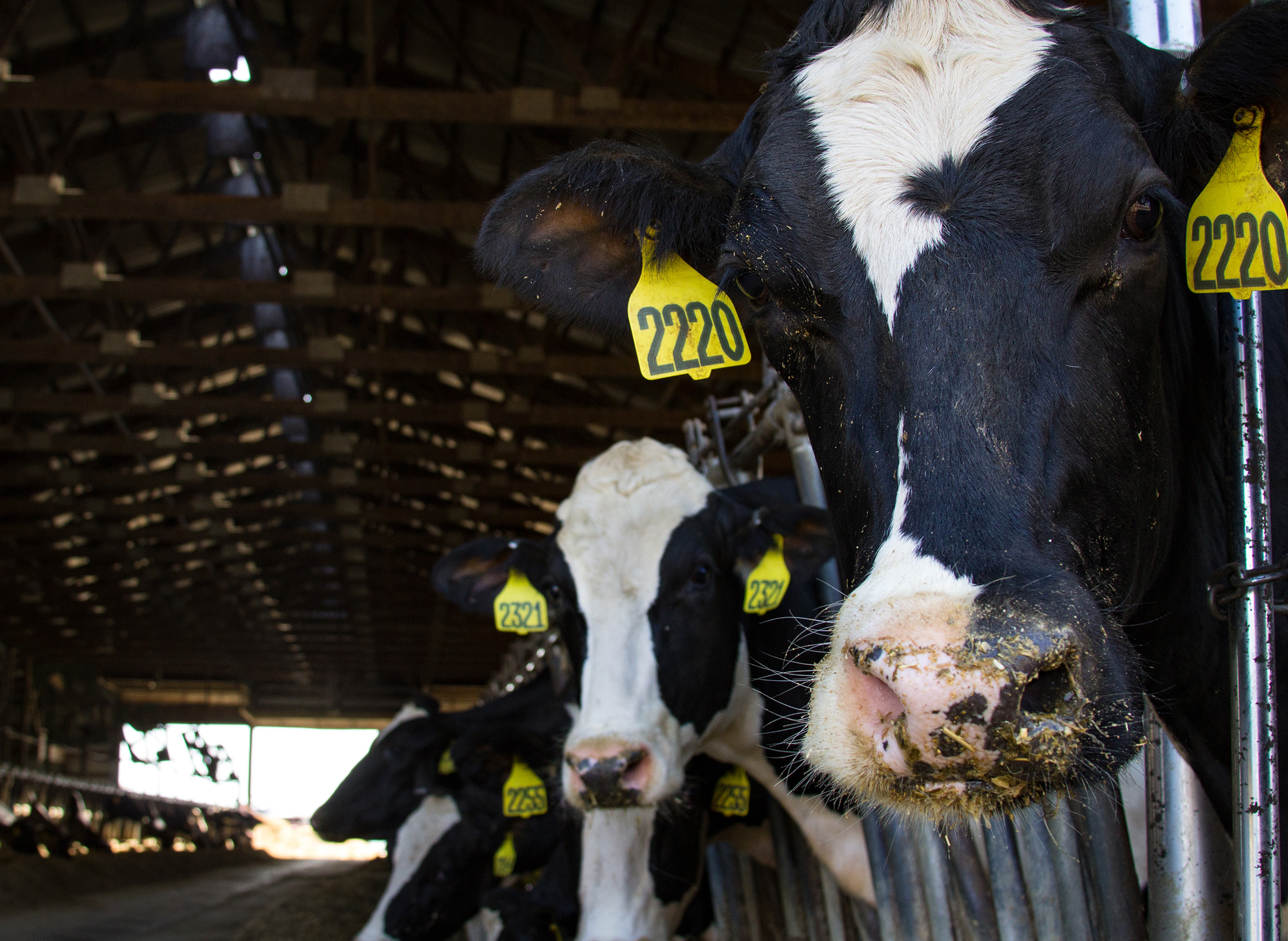 As a 2019 policy paper from the state Legislative Reference Bureau noted, this provision "suggests that even if a farm drastically increases in size or changes the type of farming being conducted, that change might not be subject to nuisance liability."

Wisconsin's statute offers more protections than right-to-farm laws in some neighboring states. For instance, Minnesota's law only protects expanded or new operations after two years since the changes were made and does not apply to operations housing more than 1,000 pigs or 2,500 cows. Illinois and Indiana provide protections beginning one year after a change to a farm but, like Wisconsin, do not exclude very large operations from protections. The laws in Iowa and Michigan, meanwhile, generally mirror Wisconsin's.

A debate over the law's protections

From the perspective of farm groups who support Wisconsin's right-to-farm law, such as the Wisconsin Farm Bureau Federation, the statute helps ensure that farmers are able to expand their operations if they choose to without fear that this growth could threaten their business by way of a nuisance lawsuit.

On the other hand, critics say the law as written essentially gives farm operators impunity to drastically alter the lives of their neighbors. That's the position held by Peg Sheaffer, a farmer-turned-activist from Green County. Sheaffer started researching the state's legal landscape surrounding large farms when a group of investors proposed a concentrated animal feeding operation, or CAFO, that would house 6,000 dairy cattle for a corn field across the road from her best friend, who also farms.

"From the perspective of being farmers ourselves, it felt like the law was written to aid and abet the expansion of CAFOs and not as it stated to protect family farms in Wisconsin," said Scheaffer, who is also the director of communications and development at Midwest Environmental Advocates, an environmental law group based in Madison.

Adam Voskuil is a staff attorney with the organization. He fields inquiries from residents who are exploring legal action against neighboring agricultural operations they consider nuisances.

Voskuil said that the right-to-farm law usually leads him to advise against filing a nuisance lawsuit because the law's standards are very difficult to meet, and if a plaintiff loses a lawsuit, they're required to pay the defendant's fees. 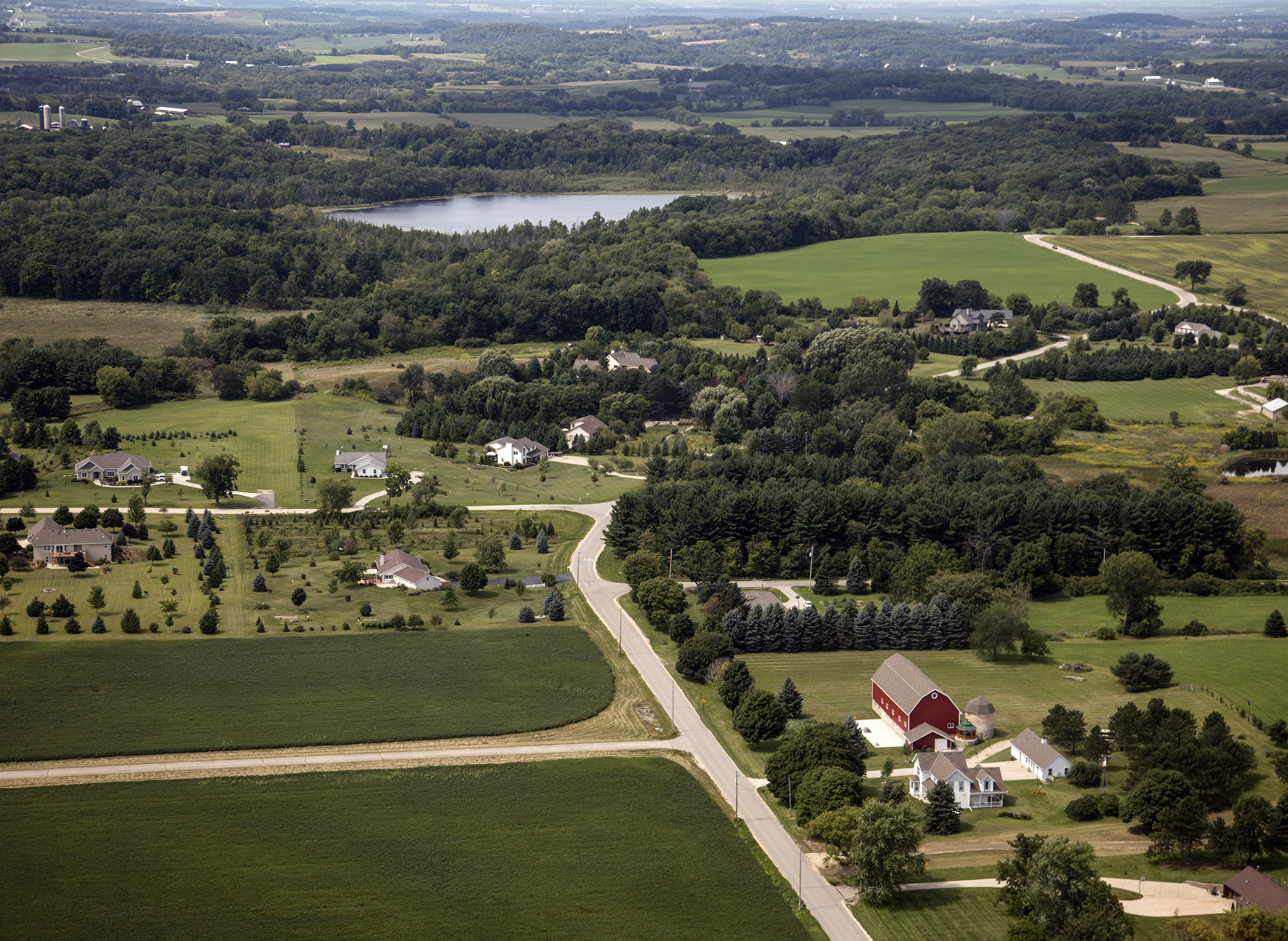 Carol M. Highsmith Archive/Library of Congress
Newer homes dot the rural landscape near Erin, in Washington County. Wisconsin's right-to-farm law was passed in the early 1980s in part as a reaction to urban sprawl and increasing conflicts between suburban and exurban residents and nearby farms.

Wisconsin's right-to-farm law has only been used as a defense in a couple nuisance lawsuits, which Voskuill said demonstrates the law's chilling effect on nuisance claims.

"The deck is stacked against [potential plaintiffs]," Voskuil said. "A lot of times we'll look at other options."

The proposed changes to that law would drastically increase mandatory setbacks for regulated facilities. Voskuil said Midwest Environmental Advocates supports those changes, but some right-to-farm advocates have described them as unworkable and say they would hurt the state's livestock farmers.

"Local units of government still have the ability to use zoning to determine where they want growth in their communities," said Karen Gefvert, Wisconsin Farm Bureau Federation's director of governmental relations. "If they choose not to use that tool, that's their decision."

"That provision is really a means test for people so that if they do have a legitimate claim then they shouldn't have anything to worry about," she said. "Having to pay court fees for frivolous lawsuits is something that no one should have to deal with, farmers or otherwise."

Meanwhile, Rusty Rumley stressed that right-to-farm laws do not protect farmers whose practices are illegal, such as violations of the Clean Water Act or other federal or state laws.

And yet, some right-to-farm laws that resemble Wisconsin's have themselves come under legal scrutiny, and in some states, court cases have challenged the protections provided by their laws.

For instance, in Iowa, a 2018 district court decision found that the state's right-to-farm statute was unconstitutional as applied in a case involving odors from a large hog operation. However, that decision was later reversed by the state's Supreme Court.

Still, the Iowa Supreme Court has in the past found some aspects of its right-to-farm law could constitute "an oppressive exercise of the state's police power," and therefore violated the state's inalienable rights clause, according to an analysis by the Iowa State University Center for Agricultural Law and Tax.

As for Wisconsin's right-to-farm law, the Legislative Reference Bureau report noted many of its aspects remain untested in court.